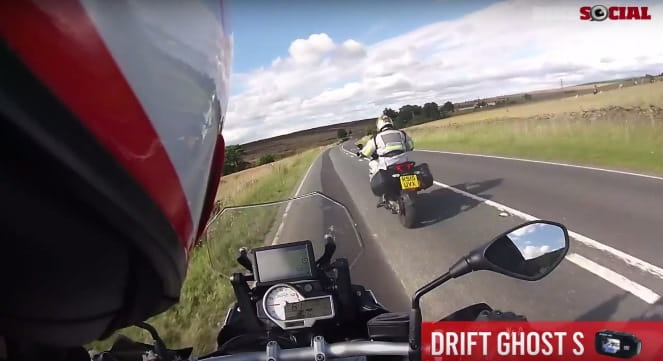 In the Big Brother world we live in, nothing is secretive. On the roads, everything is recorded too. There are probably more cameras focused on the M25 than vehicles circumnavigating it. All in a bid to make a few quid some might say although we'd be glad of them if they caught a perpetrator causing an accident.

The same can be said for the growing number of cyclists and motorcyclists recording their journeys using on-board cameras. As we become seemingly more invisible to other road users and as cameras and their fixings become smaller, easier to fit and offer better quality recording, the market for such devices has become a popular place.

For the last 9 months, we've been using a combination of Drift's two most popular cameras for our bike reviews; the Ghost-S and, more recently, the smaller Stealth 2. Both use identical mounts and are therefore easily interchangeable.

Take a look at our video montage of just some of the footage we've captured with these two cameras:

Available for £250, the High Definition Ghost-S is the daddy of the two, physically. In fact it's the largest among its main competitors including Go Pro's Hero4 and cameras from Sony, JVC and Garmin. That's because of its super strength battery providing a 3.5 hour life and the beneficial 2" LCD screen to set-up your shot (helpful considering the 160 degree field-of-view) or to play back important recordings such as your child's first steps, or more importantly, your first wheelie. 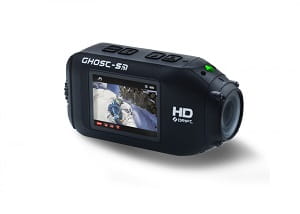 As cumbersome as it may be the camera is strong and sturdy. While we weren't faced with a size issue when attached to a bike, a chest mount would have provided ideal footage but would not be suitable for the shape of this camera.

On one trip it made a suicide bid from a Ducati at 60mph, bounced on the tarmac and summersaulted into a field. The battery was never seen again but the hard exterior performed well, the footage was retrievable and with a new battery I'm sure the Ghost-S will fire into life once again.

The menu is operated via four rubber-mounted buttons on the side of the camera and viewed via the screen. It's wonderfully self-explanatory and easy enough for the most technophobic, heavy-handed souls to operate.

Easy-to-forget, particularly when changing from a horizontal to a vertical fixing, is the 300 degrees rotating lens. Only when you come to edit your footage do you then curse for not ensuring the small, white arrow on the lens points to the sky. Nevertheless, if the camera is fixed to a surface which isn't perfectly vertical or horizontal it doesn't lead to a wonky recording, simply adjust the lens.

The image quality is worthy of commendation with the resolution up to 1080p at 60fps with 12MP stills. It automatically adjusts in low light too. The in-built microphone is good enough when you're stationary and speeds of less than 10mph but nothing will keep out the wind noise of an on-bike recording which is where the camera has spent 99% of its recording life. 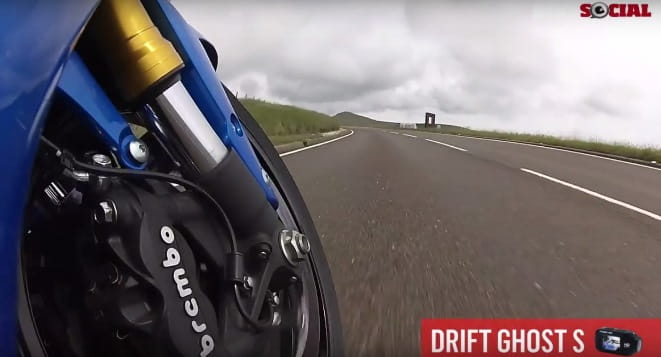 The curved and adhesive surface mounts (additional pack of 5 are sold for around £14) can be reused with double-sided carpet tape but we'd advise making double sure with a strip of duct tape over the top, pulled tight.

Other handy accessories are the suction cup mount and handlebar mount, ideal for also attaching to luggage racks and rear foot rests for alternative views. A twin-button, two-way remote control works up to 30 feet away and can be worn on the riders' wrist.

Overall, the image quality and battery recording time are the big plus points and mean the Ghost-S gets two big thumbs up.

50% smaller and 40% lighter than the Ghost-S is the Stealth 2 which was introduced to the world in September 2014. Fitting into your palm and therefore pocket, this action camera is ideal for fixing to your helmet, shoulder mount and the more confined areas of your bike to get that all important shot of the gear shift or rear suspension in action. 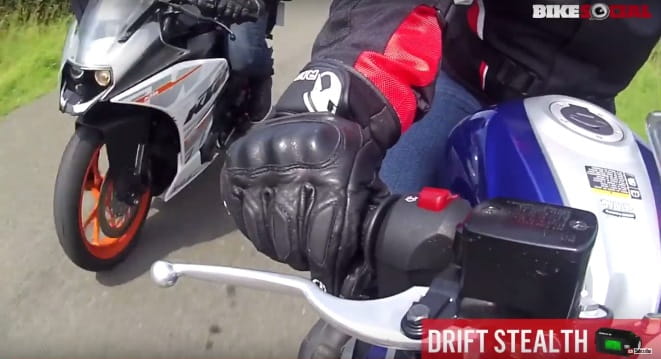 Several sticky pad mounts and a goggle-mount are included but we'd heartily recommend picking up a handlebar mount too. And depending on your bike, this attachment can be used also on pillion handles, pillion pegs, the bike's frame or top box mount for example, to give you a wide range of shots.

The Stealth 2 shoots in 1080p which is extremely good quality given its size and versatility, it too has the 300º rotating lens like the Drift, which should always be point arrow up regardless of which position its fixed in and angle it is therefore recording. 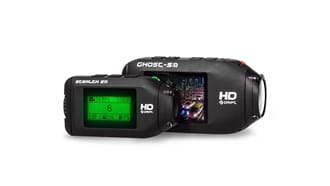 At 30 frames-per-second at the full 1080p quality, the battery will offer and excellent range of almost 3 hours recording time. This can be easily maintained when riding by using the remote control to save you form 30 minutes worth of the same shot, wasted battery time and  wasted memory space.

The three menu buttons (down from four compared to the Drift) are part of the rubber case which adds a quality and protective feel to the camera. To line up a shot, you'll need to utilise the built-in Wifi and download the free app. In place of the viewing screen on the Ghost-S, the Stealth 2 has a smaller 1.3" LCD screen to control menu options which is simple and intuitive to operate and backlit offering a clear view of a font-type reminiscent of 1990's computing.

The Stealth 2 records to a micro SD card located in the rear panel as are the HDMI and USB ports. However, unlike the Ghost-S, the smaller version does not have an external microphone jack and therefore the built-in microphone is the only option for sound, and it's not great. Then again, when using an on-board action camera with a motorcycle you'll never capture the exhaust note if the camera is mounted on the front fairing. Wind noise is the most common sound you'll record at speeds above 10mph.

Its USP's are its size (at 97g, video quality and recording time but what also stood out was the field of view. Recording at 135 degrees, its much less 'fish-eyed' than a Go-Pro for example. It's also dropped in RRP recently, down from £200 to £150 making it well worth adding to your Christmas list.

Do you use an action camera? If so, which one and why?  or