No matter what your opinion is of the last few rounds of the 2015 MotoGP season and who is to blame for the drama that spoilt the end, you just have to agree it was one of the most dramatic and enthralling seasons ever. It is easy to forget that it had pace and drama throughout and not just at the last round. But, thanks to Evro publishing, you can relive every one of the eighteen races in detail, complete with comprehensive data from each round and remind yourself that it was, in fact, a season long battle with drama all the way. 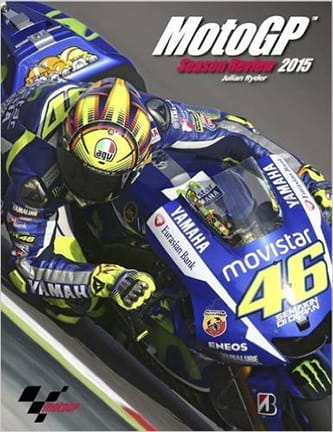 Take the basic facts of Valentino Rossi: at 36 years of age arguably riding at his best and looking as though he would add a tenth world title to his already impressive tally. The previously seemingly unbeatable Marc Marquez struggling with recalcitrant machinery and showing very much he was in fact beatable and human, while his teammate Dani Pedrosa fought what looked like career-ending arm problems. And, at the same time that these riders were in the limelight, the metronomic Jorge Lorenzo just put in seven wins to steal the championship from under their noses!

Last year the publishing house took on the mantle of producing the annual review by upping the ante (in terms of quality and speed) by having it quickly available to read and now they have done it again. The twelfth edition is now out already - just two weeks after the end of the season.

Once again the legendary motorcycle journalist and broadcaster Julian Ryder has overseen the production of this 208 page hardback volume, complete with 250 stunning colour plates liberally spread throughout from top GP photographer Andrew Northcott. Mat Oxley has supplied an incisive review of the season while technical expert Neil Spalding has reviewed tyre company Bridgestone’s contribution over the 14 years of their involvement as they bow out.

Being an official review it is, as ever, published in association with MotoGP rights holder Dorna SL, and the foreword comes from CEO Carmelo Ezpeleta who makes some interesting points!

While the aforementioned riders may be the headlines, the book examines all the riders, the bikes, and really gets behind the scenes in order to give an in-depth analysis to all aspects of the season. Eight pages are devoted to each round, ending with charts and graphics allowing you see how each rider did throughout the race. Likewise, the statistics provide a historical record that can easily be referred to in the future to settle any bar room argument.

Whilst the majority of the book is obviously dedicated to the premier class -given its title - there are, of course, chapters on Moto2 and Moto3 along with information on ‘Riders for Health’, the official MotoGP charity.

My only minor criticism of the book is that - given Danny Kent is the UK’s first road race World Champion for 38 years since the legendary Barry Sheene gripped the public’s attention - they could have included a separate chapter on the modest Kent despite the books title!

It has been said many times before, but it is worth repeating that Ryder’s writing style is as entertaining and knowledgeable as his commentary, making what is in reality a historical work an entertaining read. It is though well laid-out as usual and easily used as a reference work whilst fulfilling the basic premise of being a coffee table work as well - thanks to the lay-out and production standards.

The price may have risen by £5.00 from last year to £35.00 (which is probably something to do with it being an official licensed product) but it is very much a quality product and will remain a useful reminder of one of the most memorable and contentious seasons ever for years to come. Highly recommended!

Available from all good bookshops or direct from www.evropublishing.com