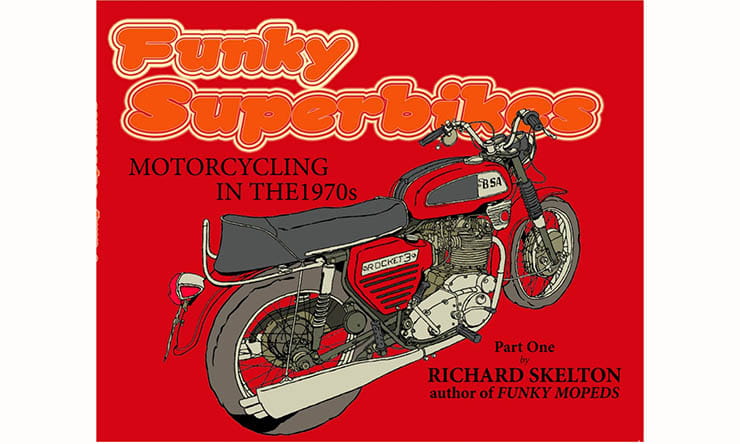 If the name of the author Richard Skelton seems familiar along with having the word Funky in the title it is because he wrote the now seminal ‘Funky Mopeds’ way back in 2004. For many - myself included - it brought back many memories of early days on two wheels, envy of friends with more money and faster mopeds etc. as well as being an entertaining read.

A few years ago he came up with a mammoth work on ‘Motorcycling in the 1970s’, so big in fact that publishers turned him down as it would have been too costly to produce in a hard copy format, let alone as a soft-bound book. So he produced it as an e book, and it was another trip back through part of my own motorcycling history and an excellent riveting read.

However, e readers are not everybody’s cup of tea, so now, in conjunction with Benzina Publishing, he has produced a slightly condensed version in a soft-bound A4 landscape format. The intention is to produce four volumes; each well-illustrated with period images and brochures, as well as up to date drawings by Martin Squires who works for the mainstream motorcycle press.

The first volume is now out, split into eight chapters, plus one where he interviews those quoted in the text like legendary journalist Dave Minton who was at the forefront of the motorcycle press at the time. It details the rise of the Japanese, German bullet-proof machines, Italian stallions, and looks at the last vestiges of the dying British bike industry.

It is an excellent read and I enjoyed it just as much this time round as I did on the e reader; apart from having an excellent writing style, it is thoroughly researched and accurate enough to bring back many memories.

The illustrations and pictures do add to the trip down memory lane, and, if you were part of the seventies, you just have to read this work. If you missed out on a mega period of motorcycling which produced many iconic machines that now seem to be rocketing in value you still have to read them to find out what you missed – just don’t miss these four volumes!