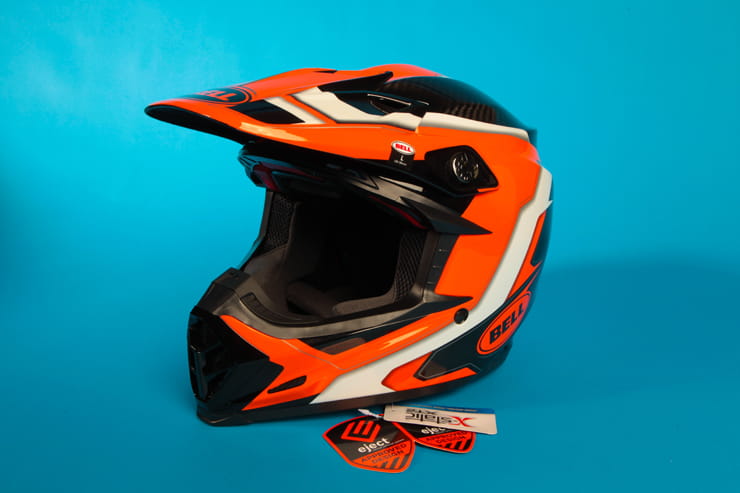 I have been testing the Moto – 9 Flex for 12 months. Like the Sidi Extreme SRS boots the helmet has seen some action and has held up well.

The carbon-fibre visible on the Moto-9 Flex is a good indication that this is Bell’s top-of-the-range off-road helmet, and while it lends additional claimed protection, I don’t think the awesome graphics do much to make it safer.

This helmet features Bell’s ‘Flex’ technology – a protection system that’s made up of a three-layer impact liner designed to manage energy transfer so impact forces are limited from reaching your head.

The core protection is made up using three layers designed to absorb impacts in different ways according to speed and features a mix of low-density polymer (called Expanded Polyolefin), expandable polypropylene and expanded polystyrene.

Alongside the layered structure is a rotational energy management system, intended to protect the brain from becoming injured from knocking against the inside of the skull, so when you take an impact in this helmet, there is a subtle movement between the inner and other layers which is designed to dissipate energy from an impact. It’s technology is now available in Bell’s road Star helmet range.

So while all that stuff is nice to have, the big question is whether it’s comfortable and thanks to the cheek pads sitting against my face in just the right place, it is.

There’s more cleverness with the cheek pads thanks to the ‘eject system’, which will allow a medical team to gently and safely remove the helmet after you are injured; because the pads are held in with magnets, they can be removed prior to the shell being taken off, so reducing the risk of neck injury. 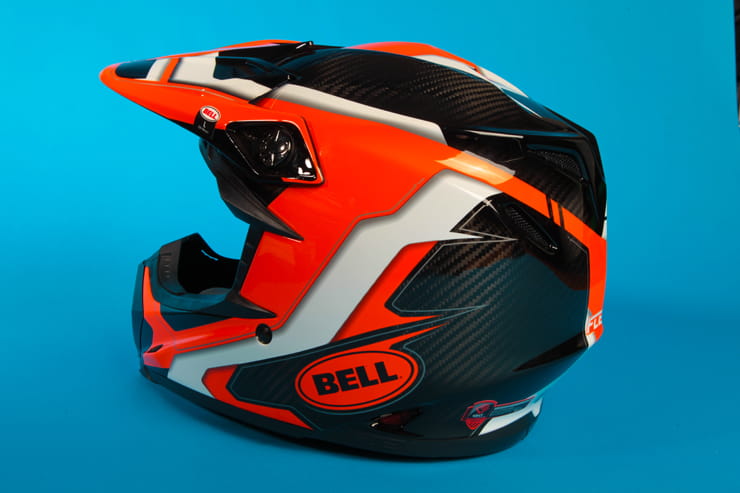 I always get hot and sweaty riding off-road and having well ventilated helmet is a great advantage. This lid features 18 vents in total and they work to create the kind of airflow I need to cool my sweaty face down. The layered internal system also helps with airflow because the air is able to move between the layers to contribute to the cooling effect.

The removable interior is made of X-static XT2 fibre, which is claimed to inhibit bacterial growth so it means the interior should prevent bad smells.

The Moto-9 Flex has an angular aggressive profile, which isn't too surprising considering the development. It’s comfortable at speed and thanks to the way the air flows over the shell, I didn’t feel the drag pulling my head back as much as I have experienced on other MX/enduro helmets. It was refreshingly free from buffeting as well.

Goggles sit well and fit easily in the helmet.

Fastening is taken care of with a D-ring fastener and the excess strap secures with a nice magnetic tab. The sun peak has is easy to flip up and down with fasteners that feel good quality. 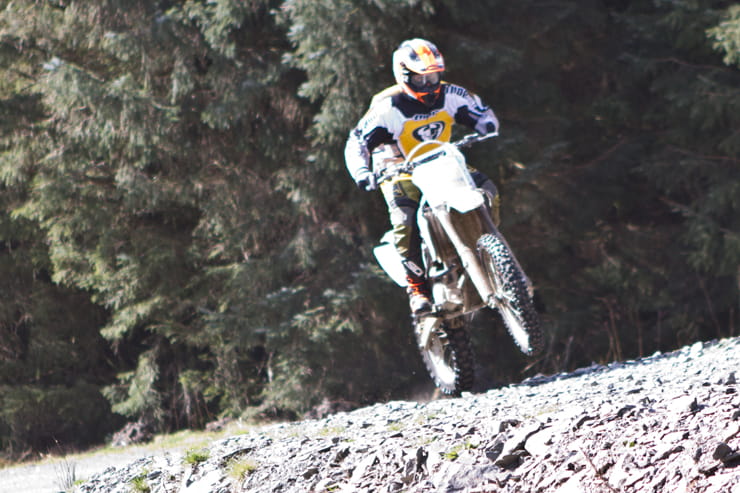 Goggles fit and sit well in the helmet.

The Moto-9 Flex is expensive compared to other high-end MX helmets, and it’s more expensive than the model it replaces, although for that extra outlay you get a new safety system. The helmet comes with a stylish helmet bag and the fact it comes with a five-year warranty should mean that if anything goes wrong with it, Bell should sort it out.

Big thanks to the Mick Extance Experience for letting me come along to their ace off-road centre in Wales. 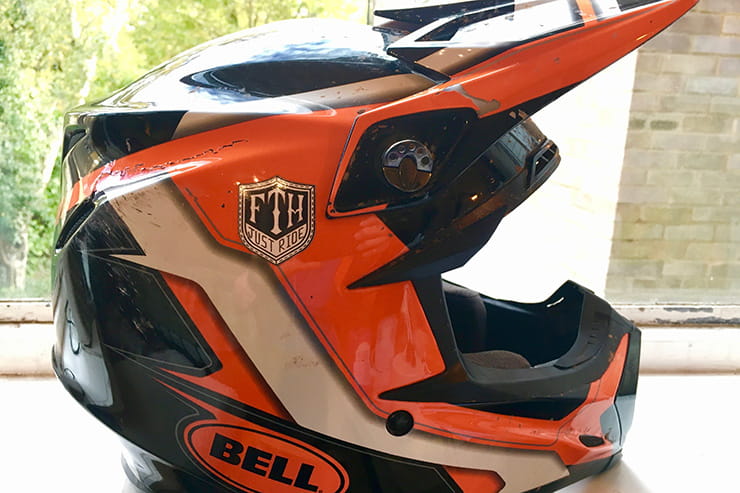 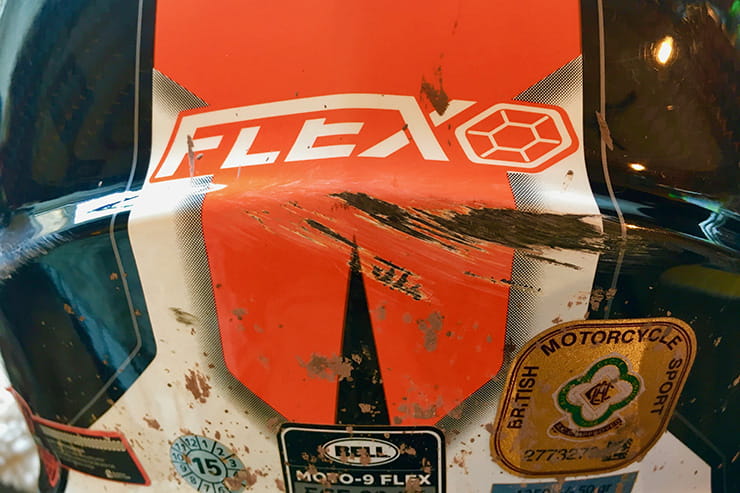 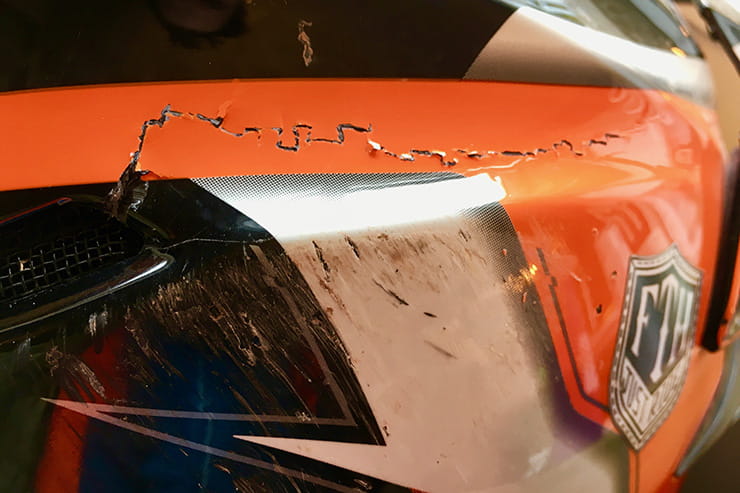 UPDATE: The day the Bell saved my life

I have successfully crash tested the Bell Carbon Flex 9 a number of times.  The helmet is designed to reduce the energy that is transferred to the head and brain in low, moderate, and high speed crashes.

I have had some minor low speed spills wearing the helmet on the MX track in the dunes and on trails in Morocco. I had a slightly bigger faster off testing the KTM 790 Adventure.

In this ‘crash test’ I knocked my head on the ground after being launched over the bars. I suffered no head injuries. The blow was severe enough for me to nurse a sore neck for some months. There was only minor cosmetic damage to the helmet.

I have been using the helmet racing flat track this year. In a race environment you always want the best protection you can find. Often get tangled up in incidents through no fault of your own with everyone pushing the limits.

Pushing hard my final race of the year ended in tears. I high-sided at an approximate speed of 80 mph. I was then hit by two bikes, one bike hit me in the head. The force of the blow was strong enough to crack the carbon shell. I was totally disoriented but did not lose consciousness.

The paramedics on the scene used the magnetic cheek pads to safely remove the helmet from my head.

On arrival to hospital I was sent for a full CT and MRI scan. The scans revealed serious chest injuries and bruising but no damage to my head at all.

Bell have evolved their Moto-9 range with upgrades to the fit using their Segment liner to achieve a more personalised, adaptive fit, for a wide variety of head shapes.