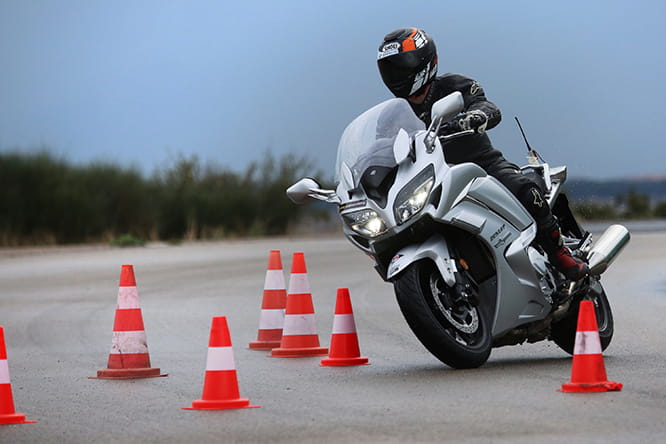 All riders look for something different in their tyres. For racers it’s grip, for others it’s cost or longevity, but one thing we all want is for them to inspire confidence – and within minutes of trying out the new rubber on the roads around Dunlop’s French test facility I knew that I was going to like the new RoadSmart IIIs (RSIII).

The RSIII is an important tyre for Dunlop. It is their new range topper in the highly competitive and growing sports touring sector, where competition comes from the likes of the Bridgestone T30 Evo, Metzeler Z8 Interact, Michelin Pilot Road 4 and the Pirelli Angel GT. To find out more about their new product, Dunlop invited Bike Social to the world press launch at Montpellier to try them for ourselves.

That said, Metzeler are set to introduce their newest sport touring tyre within the next few weeks too. Roadtec 01 will be launched in Germany next month and we'll be on the scene to see how they match up.

Dunlop’s original RoadSmart was introduced to critical acclaim in 2008, although the follow up RoadSmart II (RSII) was less well received when it arrived a few years later, largely due to the big advances made by the other brands. The Birmingham company have set out to get back to the top of the class with the latest version and are making some big claims about the RSIII’s potential.

All of the big tyre manufacturers are making great tyres these days, with Dunlop’s engineers acknowledging that the competition is so good that they are all ‘within a few percent’ of each other. 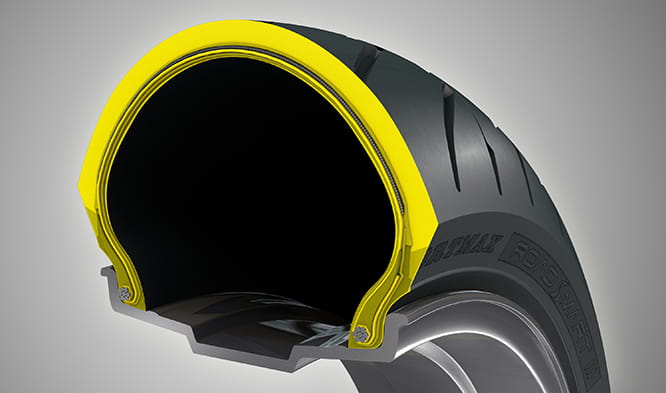 With that in mind, they accepted that it would be impossible to build a tyre that was class leading in all areas but targeted making big improvements in handling, durability and wet grip, without sacrificing the RSII’s other characteristics.

To achieve this, the company has developed an all-new carcass and compound, as well as a new tread pattern designed to disperse more water.

The new front profile has a smaller radius than the RSII, which is immediately noticeable during slow speed manoeuvres. At the back, the radius is more rounded to provide a good balance, while the make up of the new compound allows the tyre to work well from cold and be ‘stronger for longer’.

That’s Dunlop speak for the tyre not only lasting longer (and their independent tests, carried out by the German Motorrad Test Center back up the claims) but also maintaining optimum performance for longer.

While we are not able to back up the mileage claims, which suggest the RSIII could last 40% longer than the RSII, we are able to vouch for both the cold and wet weather performance. Dunlop claim that their engineers built 206 prototypes over 31 months, conducting 834,170 km of endurance testing across 108 models. It’s a tyre designed to be used on everything from naked 600s to big tourers, with a special single ply version (with a softer rear carcass) developed especially for extra stability in the lighter and more aggressive streetfighters.

Dunlop laid on a fleet of around 50 bikes to allow us and the assembled media to try out the RSIII, with everything from Yamaha’s lightweight MT-07 to BMW’s K1600GT uber-tourer.

I jumped on the BMW R1200RT, partly because it’s a good reference as I’ve done loads of miles on them in the past and partly because it was absolutely hammering it down and cold. Very cold. I cannot lie. That big fairing and heated grips never looked so good!

But within a few kilometres I was impressed with the new Dunlops. I have to admit that I am not the most confident wet weather rider. A few years back I spent three days riding a Sprint ST around Scotland in similar conditions and felt like I was going to crash at every corner, but the biggest complement I can pay the RSIIIs is that I just didn’t think about them.

Sure, I was stressing about visibility and trying to work out where I was going, but the bike and tyres just did what I asked of them in a fuss free manner. They gave me loads of confidence and when I did start to press on I was impressed with the wet weather grip and the lightness of the steering.

After a brisk two hour road ride we returned to Dunlop’s impressive Mireval test track to dry out and undertake a few workshops and learn more about the new rubber.

First up, somewhat ironically, was a trip to the wet handling track where a fleet of Suzuki GSR750s awaited us. The track was flooded, as if any more water was needed, to have a consistent stream flowing across the surface.

We had the use of three GSRs. One fitted with Michelin’s Pilot Road 4s, Europe’s biggest selling tyre in the sector, one fitted with Pirelli Angel GTs (benchmarked as the best wet weather tyre on the market) and, of course, the new RoadSmart IIIs. 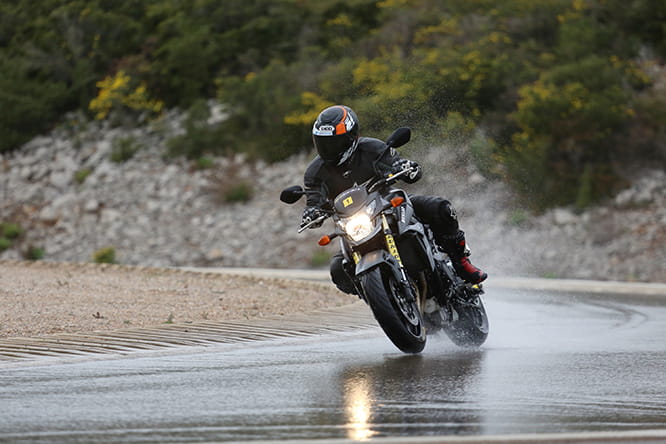 Candidly, Dunlop do not claim that the RSIII is the best wet weather tyre in the sector, stating honestly that their tests established it as second in class (although naturally they claim to be better in most other aspects) so kudos to them for fitting a set of Pirellis for us to try out.

True to their reputation, the Angel GTs were indeed very good on the flooded track. No telemetry was fitted to the bikes, but I would say that it was a close run thing between Pirelli and Dunlop. The Italian rubber probably just shaded it in terms of outright grip, but the Dunlop was still very secure and arguably felt a little bit more precise through the corners. The surprise for me was the Michelins, a tyre which I had always considered to be designed for wet weather riding but which squirmed under even light acceleration and felt very loose at the rear under braking. They weren’t bad, but definitely a distant third to the others in this test.

For the other workshop, Dunlop fitted out two otherwise identical Yamaha FJR1300s with RoadSmart IIIs and its predecessor, the RSII. Doing figure of eights, circles, slaloms and escape manoeuvres on a marked out course, we were then able to back up our impressions by analysing the results from the 2D datalogging equipment.

That datalogging confirmed what Dunlop said and I felt, namely that the bike needs much less effort to turn with the new tyres fitted. The FJR is a heavy old girl but the RSIIIs definitely lightened up the steering, with datalogging suggesting that it requires around four-times less force to steer the bike through the low speed manoeuvres.

The opportunity to finally ride the RSIIIs in the dry came right at the end of the day, as we headed out on the utterly brilliant main circuit at Mireval. It’s a real British style circuit with a gloriously quick first turn and a succession of challenging corners and elevation changes.

Led around by racing royalty John McGuinness, a man who knows Mireval well through his TT and world endurance testing, we were able to put in some fast laps onboard a RSIII-equipped BMW R1200R.

The 15 minute session confirmed that modern sports touring tyres really can do it all these days and while the RSIII is not the first choice for a track day, it definitely works well from cold and never felt out of shape at fast road speeds. All-in-all, it’s a great tyre that puts Dunlop back at the forefront in the sports touring sector.

Dunlop’s RoadSmart III is definitely a welcome addition to the sports touring market, putting the Brummies right back up there with the likes of Pirelli’s Angel GT.

It sits right at the top of the Dunlop range, with the original RoadSmart and RoadSmart II remaining on sale for those looking for something a little less expensive.

Speaking of cost, prices vary depending on sizes.  One of the big selling points is that Dunlop is offering free fitting at its official dealers for the next few months but, as a ballpark figure, expect a set of RSIIIs to come in at around £240 for a set, with the older RoadSmarts remaining in the range at around £40 less per set.

There are also a huge range of sizes, including an 18” rear option that means owners of Honda’s classic RC30 can fit some modern rubber to their bikes (although some of the more unusual sizes will be Japanese made, with slightly different specs to the European models).

Whether they do go ‘stronger for longer’ is a claim that can only be substantiated through long term testing but, from what we’ve seen, we could have a new standard in the sport touring class.

Which tyres are you running and why?