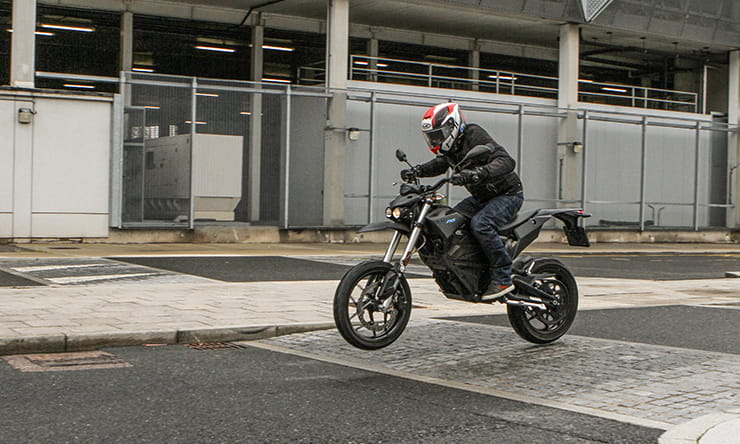 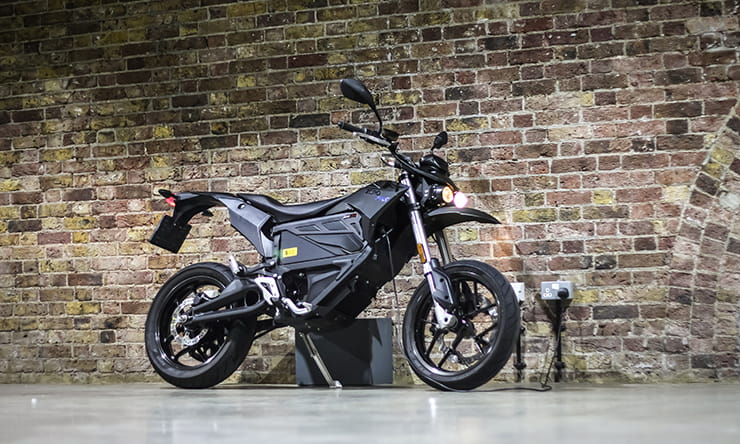 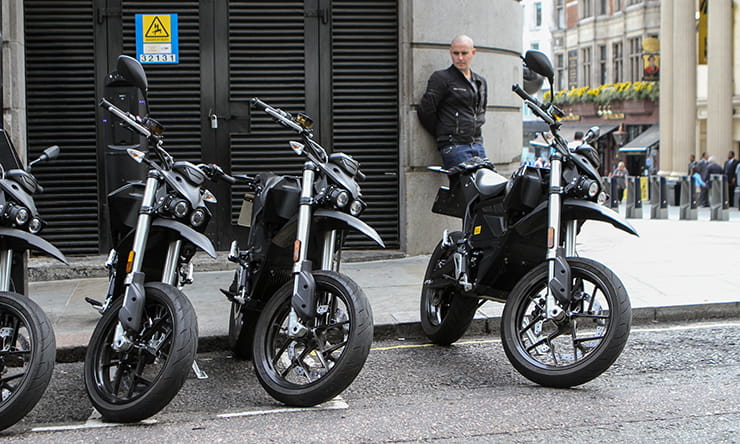 Electric vehicles: Whether you like it or not will at some point be planet earth’s primary means of getting about. Formula 1 has Formula E, the TT has TT Zero and even MotoGP has sprouted MotoE for 2019. And they aren’t doing this for PR Brownie points, they’re doing it to steal a march, so when the impending fuel crisis does land, at least we'll still have some sport to watch!

Back on planet road bikes it’s Californian company Zero who have being setting the standard in the world of electric motorcycles. With its range of coolly designed bikes covering multiple uses and for riders from CBT level and upwards. It’s fair to say our friends from across the pond have so far done very well in this growing market.

So when an invitation arrived to head to one of London’s trendiest, hippest venues to sample the brands latest offering the FXS, we couldn’t say no.

Instantly recognisable as a supermoto the FXS cuts a mean silhouette, with industrial styling and stealthy black panels. But was it all the hooligan its exterior styling would suggest? 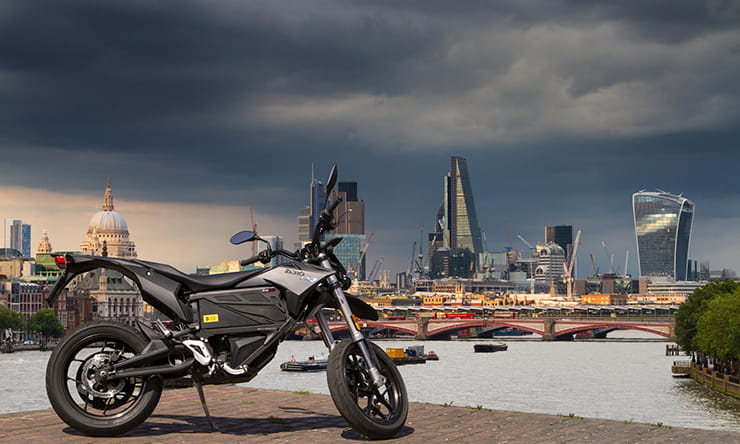 The FXS that we rode comes in at £10,490 but the bike is eligible for an electric vehicle grant from the government that equates to £1500 meaning the real cost is more like £8,990. That still makes it the most expensive supermoto in the class – Husqvarana’s 701 Supermoto comes in at £8,599 – but just looking at the price doesn’t give you the full picture.

The running costs of the Zero compared to a petrol powered equivalent are massively reduced. With only one moving part in the motor, the normal wear and tear associated with a petrol engine and its hundreds of pieces of spinning, sliding and crashing metal is negated. You have no chain, no gearbox, no clutch and no filling up with the wrong fuel to pay for. And while we’re on the subject of fuel there’s another bonus, it costs about £1.50 to fill the, errr tank. And that’s if you stick it on charge at home, you could plug it in at work and drain somebody else’s network to cover your ride home. Or you could use one of the many electric vehicle charging points that are cropping up around the country, many of those will fill the tank for free. 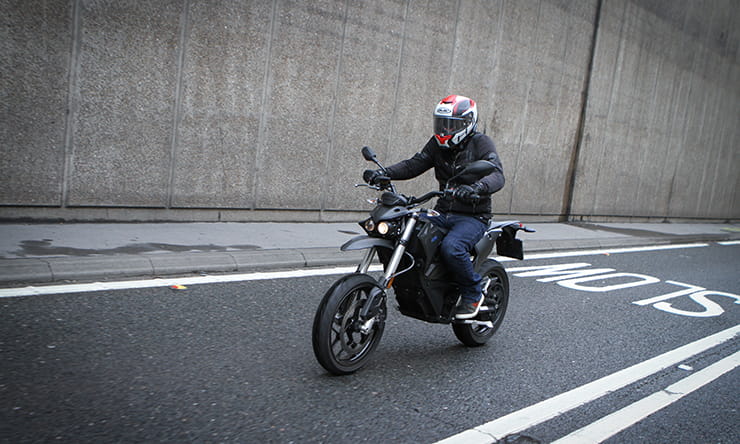 The FXS’ is powered by a Z-Force 75-5 passively air-cooled, high efficiency, radial flux, interior permanent magnet, brushless motor and yes you’re right, that does sound like one of the spaceships from Star Wars and to be honest with you, it’s probably about as hi-tech!

Peak torque from the motor, which it produces from zero rpm, is a stump-pulling 106Nm (78ft lb). That’s the same as a GSX-R1000, and you don’t have to wait till 4,000rpm for the torque to come in, it’s there from the first twist of the throttle all the way to the stop.

So with all this power and torque on tap what’s the result?

Thrust. Massive amounts of whooshing thrust and an eerie whistle from the motor and carbon belt that drives the back wheel. Every time I ride one of these they amaze me by how quick they are. It’s like there’s a whole new type of acceleration that’s lay undiscovered in the Californian desert for the last 100 years. All of a sudden some silicon valley super-geeks come along and unearthed a warp-drive. Then stuffed it into a bike.

And don’t think that all this talk of otherworldly power, torque and thrust are going to make the FXS un-rideable, because it’s really not. The controller (ECU) of the bike is tuned in such a way that standing starts just need a full, foot-to-the-floor throttle action and the ECU will meter the torque in, gently at first allowing just a tad of front wheel lift until the bike hits 15-20mph and then all hell breaks loose. And with no gear changes to halt the proceedings the 0-60 times of these bikes is phenomenal, think somewhere in the 3.5 second mark. 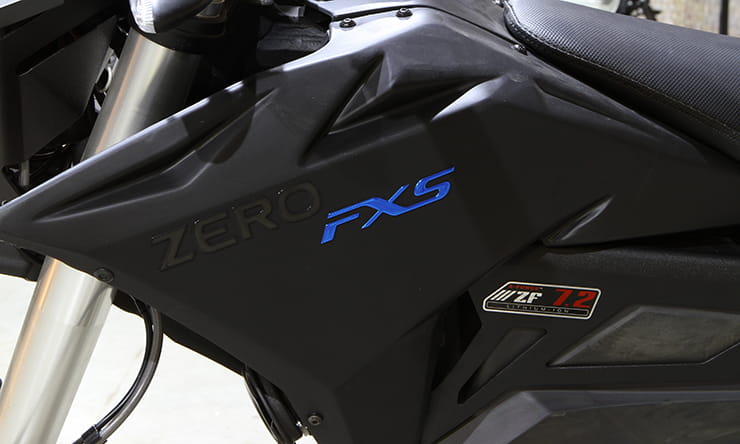 Economy with an electric bike is always the big talking point and yes, if you’re planning a cross-continent adventure then the chances are you’re going to run into trouble. The Zero FXS does have about 60 miles of range from a full charge if you took it easy. If you rode it like a supermoto should be ridden, you’ll be lucky to get half that.

The thing is though, the infrastructure to keep these things rolling is getting better. The fast (and sometimes free) charging stations that used to be only found in the big cities are cropping up all over the country. Meaning with a little bit of planning, and maybe some route deviation, you should get from A to B, just with more coffee stops than normal. 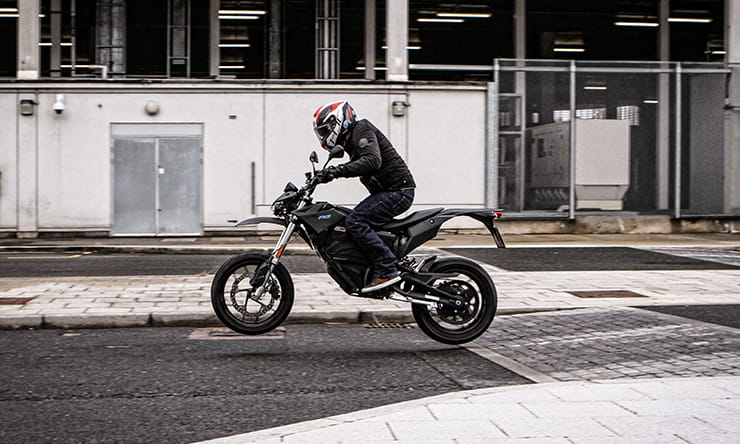 I’ve ridden most of Zero’s range, from the sporty roadster the S to the gangly pseudo-adventure bike the DSR and Black Forest. The other bikes I always found to be either under or over-damped. I was extremely happy to find the FXS’ suspension to be spot on for the type of bike it is. The Showa forks on the press bikes we rode were tuned perfectly for the pot-holed and diesel soaked roads of London, it’s even comfortable. It’s nowhere near as soft and wallowing as the DSR or the Black Forest special edition I rode earlier this year and gives just the right amount of dive when you start to grab the lever without bottoming out too easily – it’s definitely the best handling of the bunch.

The chassis is a completely different design than the naked roadsters and adventure bikes in the Zero stable and is only shared with the enduro/trail inclined Zero FX. The new frame and battery position increase the bikes ride height significantly but does mean the bike can’t use the same spec batteries as the other models, and that does hurt the range.

Weighing in at 133kg the FXS is a feather weight machine. The lightest bike I’ve reviewed is Honda’s CB125R which comes in at 126kg – but that’s only got 13bhp. The lack of weight and sit up and beg steering geometry make the bike extremely fast turning with a tad of instability mid-corner of your anything other than smooth with the throttle. 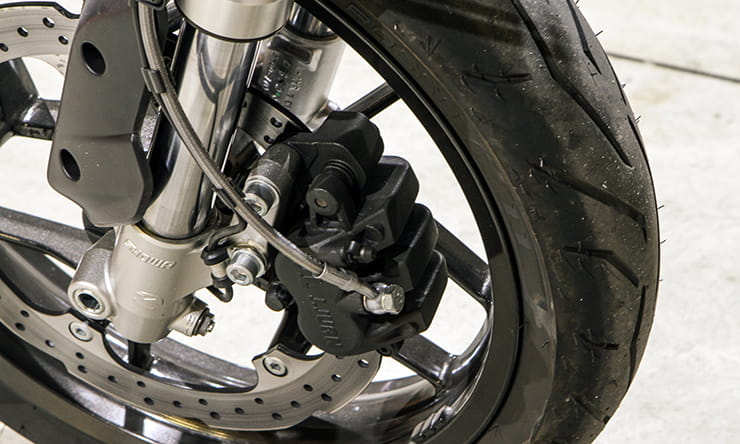 Halting the electrical revolution are J.Juan discs front and rear. The front is a 320mm floater and two-piston caliper, rear is a 240mm disc and single-piston sliding caliper. The front brake is surprisingly good, with plenty of bite and feel – no doubt helped by the FXS’ diminutive size.

The unobtrusive ABS saves even the most suicidal of London pedestrians thanks in part to fairly grippy – once warmed up – Pirelli Diablo Rosso tyres. 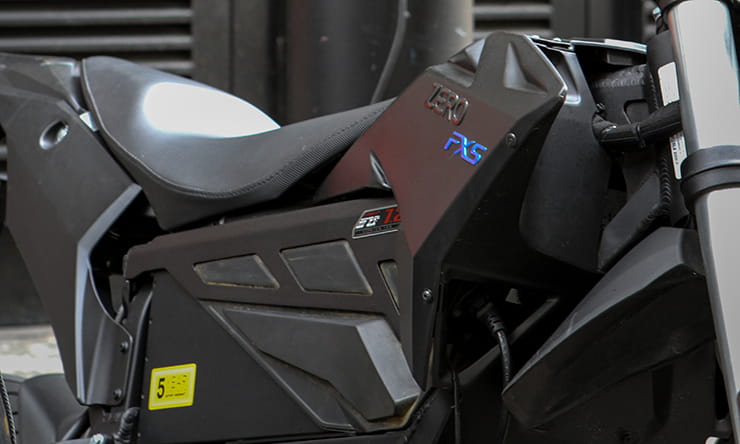 Comfort, which let’s face it is never really the strong point with a bike like this, is surprisingly good. The seats fairly narrow but not overly hard and the bar and foot-peg location make for an un-cramped riding position that could easily be good for three hours in the saddle. 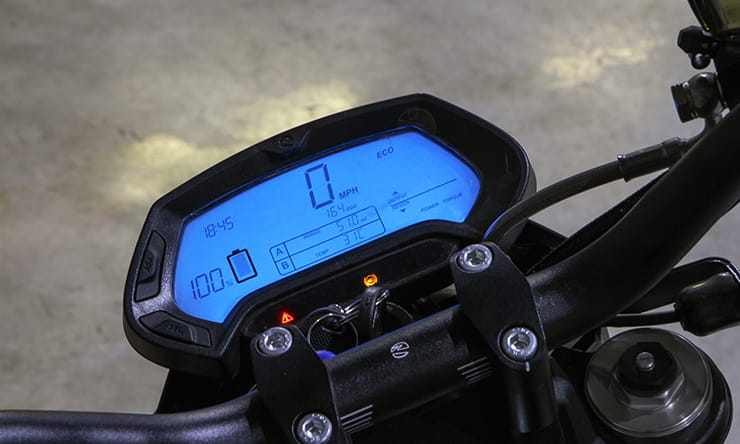 The riding modes available are Sport, max power and torque, no battery regeneration and ECO, which brings the bike’s power down considerably and limits the acceleration and top speed. It’s still quick in ECO, just not quite so urgent as the other modes.

For darting in out of traffic, the Custom riding mode was the best option. I’d configured it via the app (yes the Zero has WiFi and an app that lets you change how the bike works) to give me maximum power and torque but retaining the battery regeneration. While coasting with the throttle shut the motor would now recharge the battery, topping up the mileage just a tad as we went along.

The increased resistance from the engine also makes the bike a bit more normal to ride, with a kind of synthesised engine braking that you really miss if it isn’t there.

The menus are all controlled from the right handle bar – it’s all well laid out and easy to use. 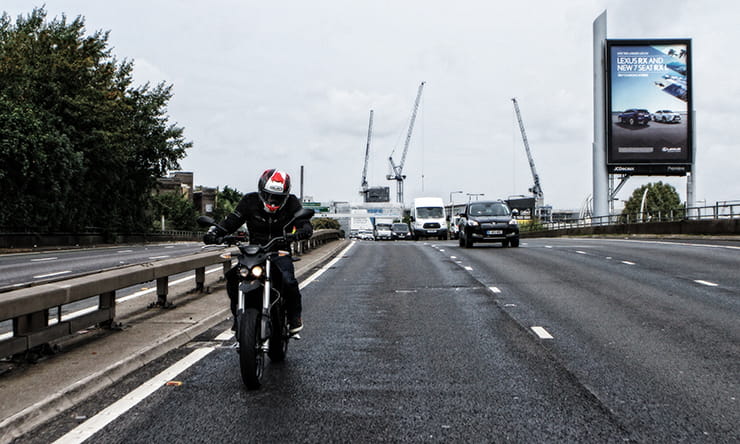 Of all the bikes in the Zero range I can’t deny the FXS is my favourite. It’s not just the lack of weight and power though, it feels like a proper bike and begs you to ride it like one in a way none of the other Zero’s do.

If you want a bike to commute on then yes, the FXS will fit the bill perfectly. But I see it as more of a second bike, like the sports bike you park next to the winter-hack. It’s too much fun not to ride the wheels off the thing.

It’s not a motorcycle, it’s a grin factory.

Three things I loved about the Zero FXS…

• Tyres take a while to warm up 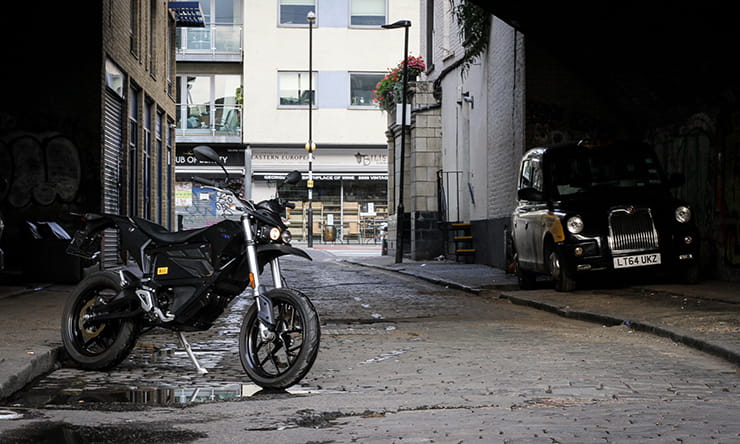