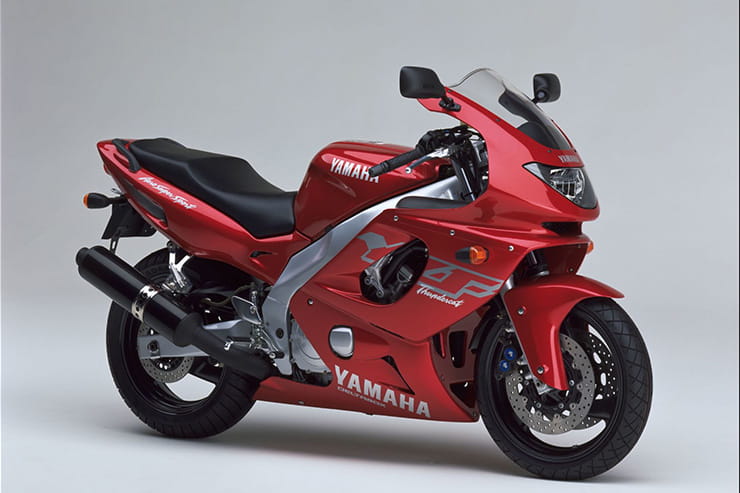 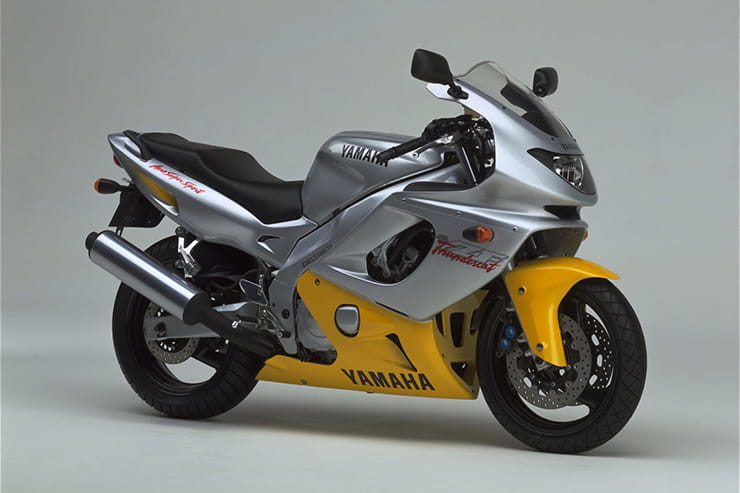 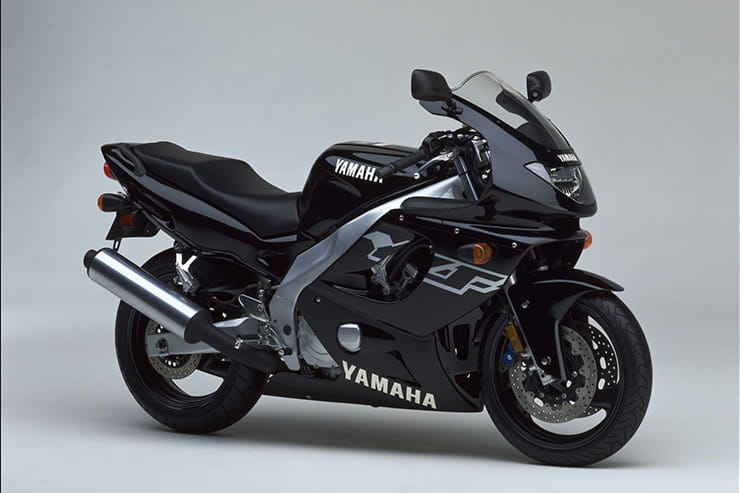 Supersport bikes used to be the do-it-alls of the motorcycle world, a fact epitomised by the first Honda CBR600F models, which set the mould for the class. As well as a centre stand, these bikes were cheap to buy (in comparison to a sportsbike of the day), reasonable to insure and, above all, more than able to be used on a daily basis rather than kept purely for sunny weekend rides. However as the years passed the supersport class evolved as track-focus took president over practicality and we ended up in the situation we are in now where the whole class has made itself largely redundant. So if you are after a daily rider that is cheap, fun and still fairly sporty, a late 1990s supersport bike is the way forward. And few are better used buys than the Yamaha Thundercat.

Yes, it has a daft name (unless you are into 1980s cartoons), but get over this slight irritation and a used Thundercat is a brilliant buy. As well as being nice and roomy to ride with clip-ons that aren’t positioned ridiculously low, the Cat comes with a motor that is built for use on the road rather than demanding to have its nuts revved off around a circuit.

With a remarkable amount of smooth drive and a fairly respectable mid-range, the Thundercat’s inline four is a joy to use. It only makes a claimed 100bhp, so realistically you are looking at 90bhp at the rear if you are lucky, but that’s not too far off what Honda claim on some of their modern CBR models, so is hardly left lacking for those not too fussed about going bonkers. What is far more important is the fact it is solidly built and seldom develops major faults, which is always a great selling point for a used bike – especially one as cheap at the Thundercat.

Think of the Thundercat as a bit more exciting version of a CBR600F and you won’t be disappointed (unless you want a centre stand…) With prices starting at just £900 and a good one easily available for under £2,000 they are a great used buy for someone new to two wheels who wants a sporty first big bike or even a commuter looking to keep the worst of the corrosion off a newer machine. While they are unlikely to reach ‘future classic’ status, by the same token you are aren’t going to lose much cash on one either when it comes to selling it on again as they are so cheap to buy. What’s not to like? 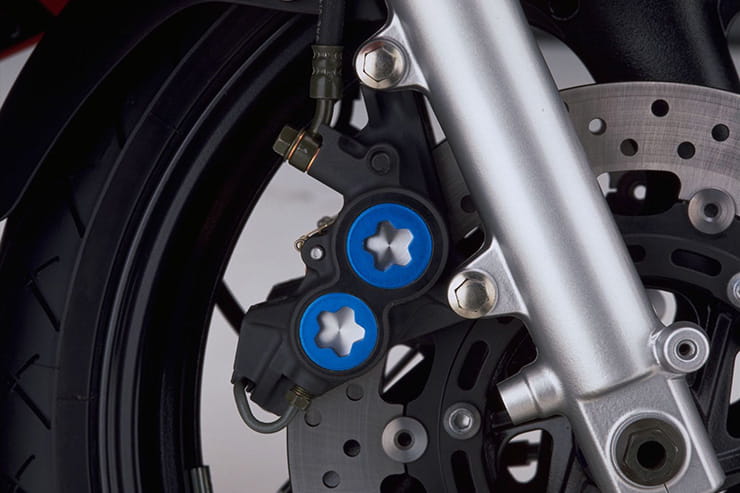 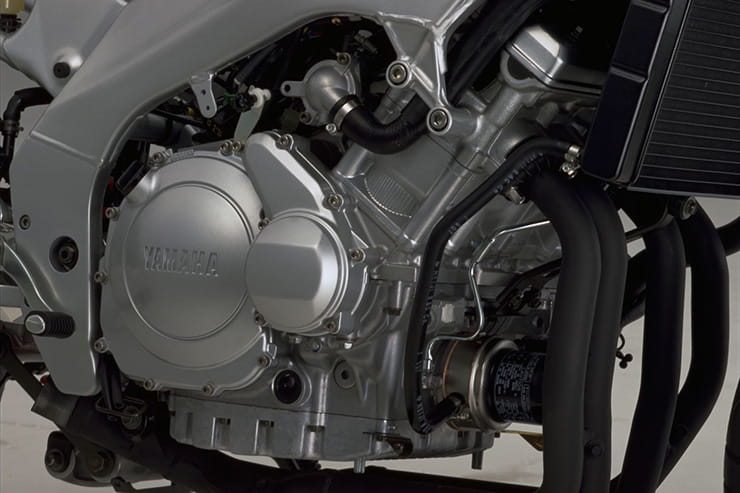 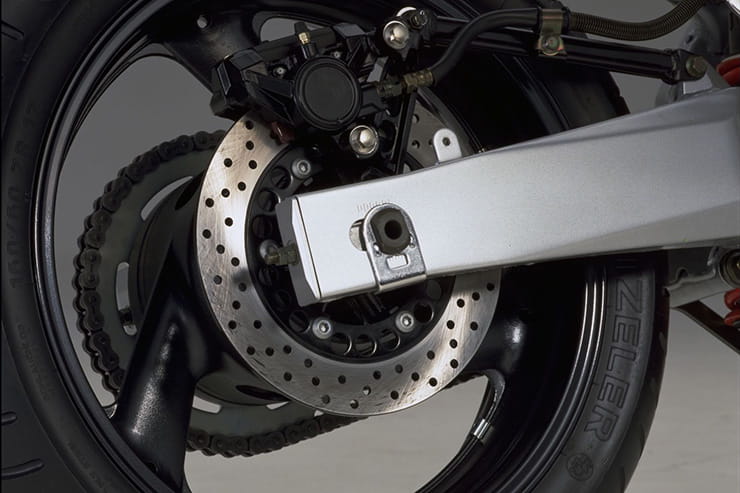 There is one major cause for concern on a Thundercat and that’s its front sprocket. Or more precisely, the nut that holds it in place. All you need to do is type ‘Thundercat front sprocket issue’ into Google and you will see pages of information, even more so if you type in ‘FZS600 front sprocket issue’ as it also plagues Yamaha’s naked middleweight. The crux of the issue is the fact that the sprocket retaining nut has too shallow thread, meaning it can work loose and that results in the sprocket escaping its shaft and a lot of mechanical mess! There are a variety of fixes that range from using thread lock to secure it in place (a good idea), dabbing a bit of weld onto the thread (a bad idea) or fitting the updated nut that has a deeper thread (the best idea). Always inspect this area very well on a used bike and look for signs of damage to the surrounding cases. When you own the bike, check its torque setting (50ftlb) on a regular basis. Forums also report gearbox failures aren’t uncommon, however this is somewhat expected on older high-mileage machines so check all is well on a test ride. To be honest, a broken gearbox will cost more to get fixed than a Thundercat is worth, so don’t be tempted to buy a cheap one and assume you can get it mended for pence as even the parts alone are fairly pricey. Overall, the engine is solid, just be aware it has 4,000-mile service intervals with valve clearances requiring checking (they are never out) at 24,000 miles. A few owners report issues with the carbs, which can wear over time, but this is another common problem with older bikes and rebuild kits are relatively cheap with the carbs fairly easy to access. Failing that, used spares are plentiful on online auction sites.

Onto wear and tear and if the mild steel exhaust downpipes haven’t rotted through by now, they probably will do any day soon. Give them a good visual check and with the engine running, feel for any leaks. A new system will set you back roughly £200 for the downpipes and £150 for a can if you opt for a budget item, which isn’t too bad. Always check consumable items such as the chain and sprocket, tyres etc and while they are very robust, just check the blue-spot calipers aren’t seized up. Crash damage is very common, so ensure all is straight and true, and also perform an HPI check as a lot of Cat-D cosmetic write-off bikes are out there. While a Cat-D is perfectly safe to ride (it has been deemed uneconomical to repair by an insurer), the fact it has this hanging over it means it should be significantly cheaper to buy as it hammers its residual value.

As the Cat was hugely popular in America (it was sold there until 2008 despite being discontinued in Europe) there are a few US imports in the UK market. Don’t be afraid of them as they are identical in spec to the European ones and aside from occasionally having reflectors mounted on their forks, all you need to check is that they have passed an MOT and therefore have had their headlights set up for driving on the left-hand side of the road. 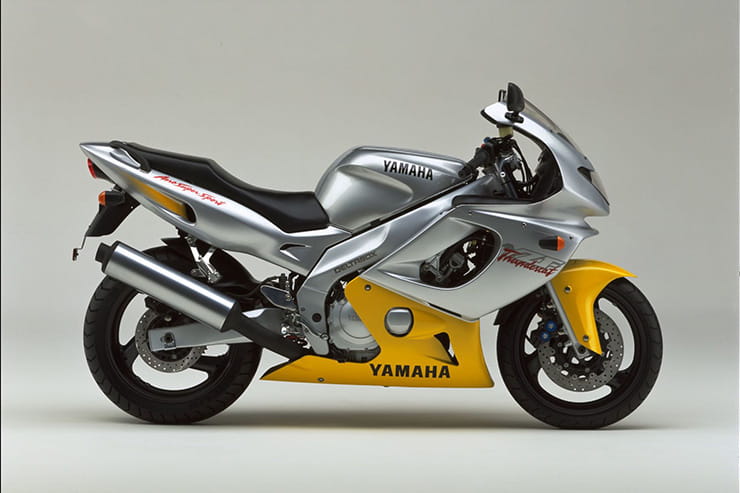 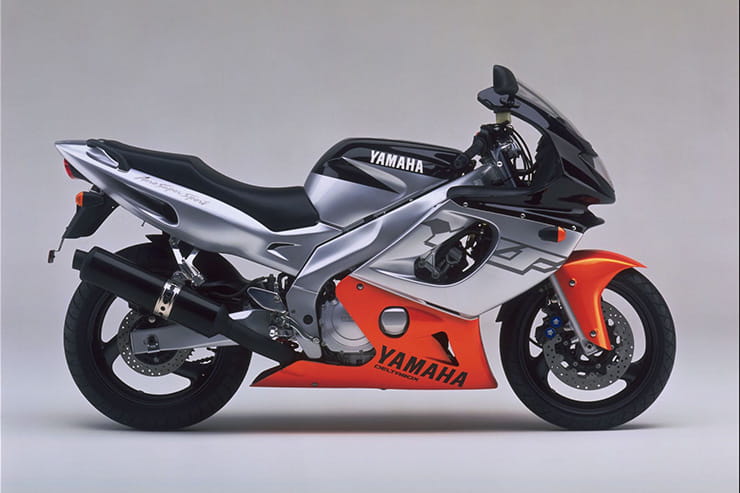 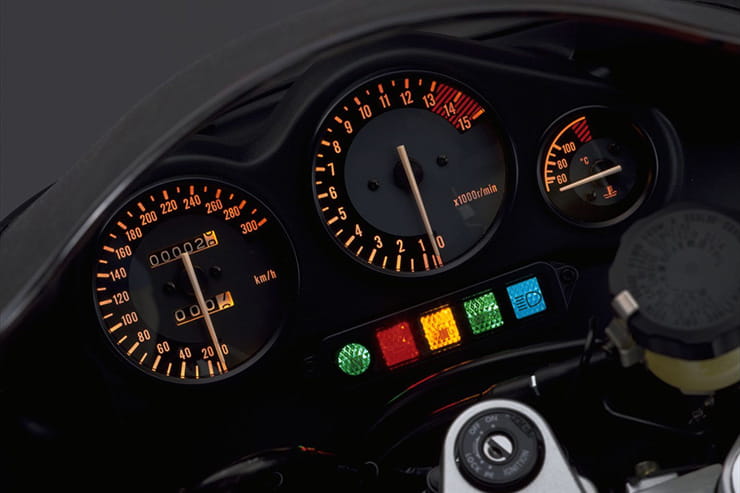 The Thundercat hung around in Yamaha’s model range and was never substantially updated, probably because the firm knew the YZF-R6 was on its way in 1999 and the Cat’s days were numbered almost from its inception. But that’s not to say there weren’t a few small tweaks. In 1997 the rear wiring loom was altered to allow Yamaha’s ‘plug and play’ alarm to be fitted while 1998 saw a small modification to the exhaust system. Neither update makes any difference to the bike, so aren’t worth worrying over. 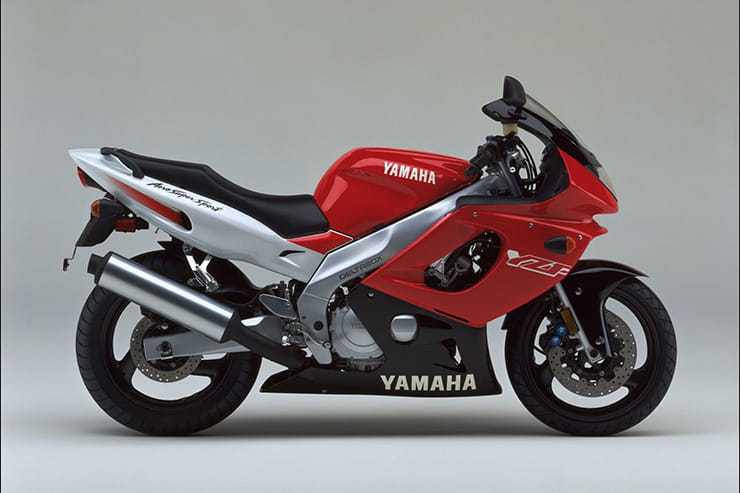 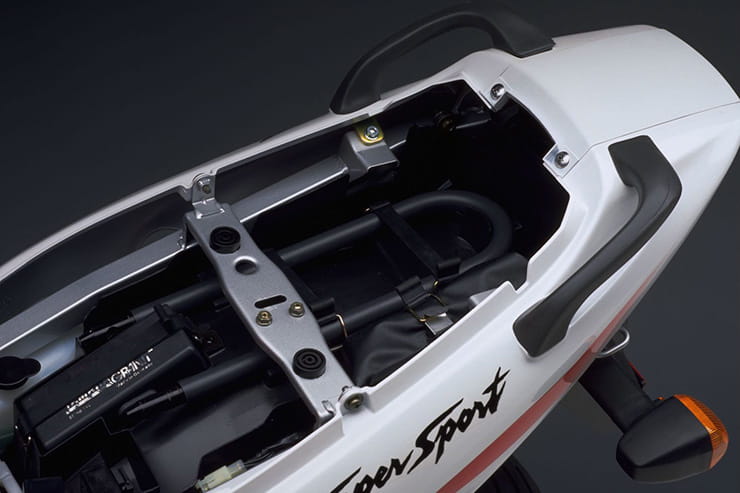 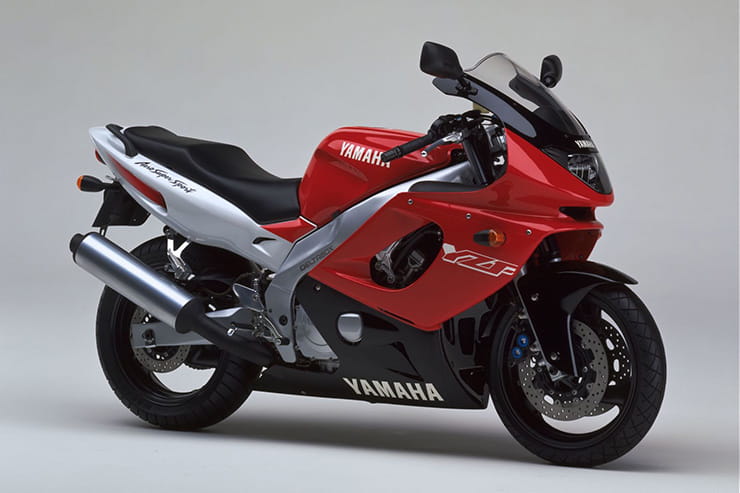 Where some older supersport bikes hold their value in the used market, due to its dated styling and lack of sporting pedigree the Thundercat’s prices generally drop to a point where an MoT and reasonable condition visually are enough to secure a sale. At the very bottom of this scale you can pick up a hack for under £1,000, but you are probably either looking at a high-mile hound or a Cat-D write-off. If you don’t mind it having covered in the 30-40,000-mile region, you can get one for £1,500 that will be used but not too tatty while £2,000 should secure you a nice early model in a private sale. There really should be no need to pay over £2,500 for a Thundercat and there are some beauties in dealers for just under this mark that will run and run forever. 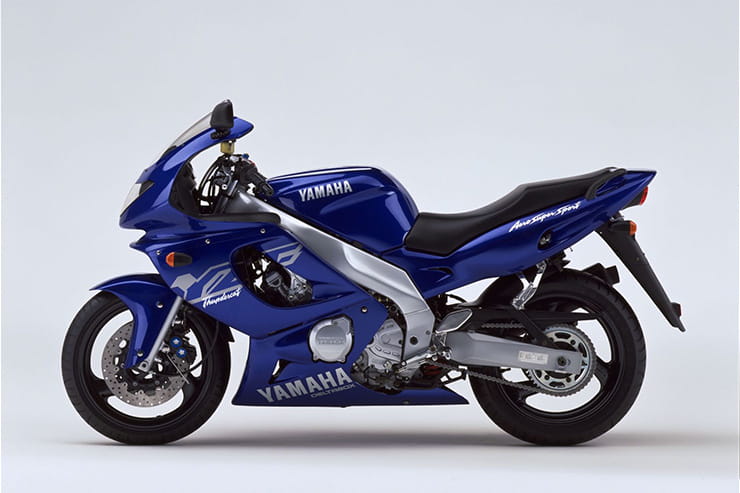 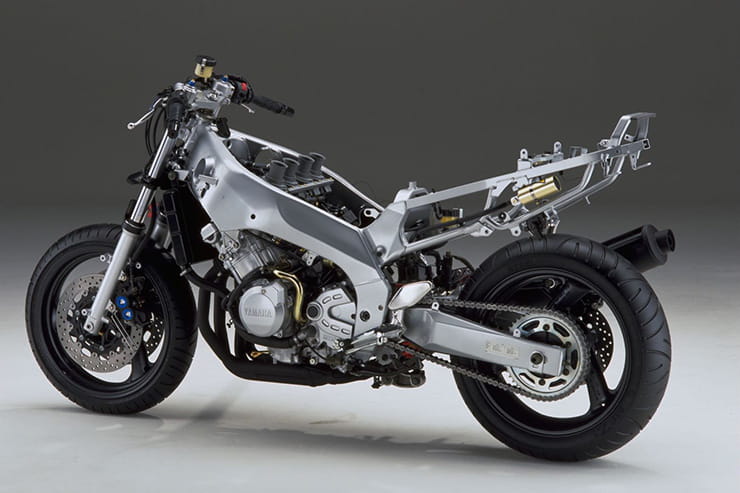 There is a dedicated Thundercat forum and owners’ club at www.yamaha-thundercats.org while the Yamaha forum https://yamahaclub.com also has a section focused on the bike. A Thundercat fan has even set up the Thundercat Fan Club on Facebook, which has a few followers. One of the best sources of information is the US-based site http://www.yzf600r-usa.com.