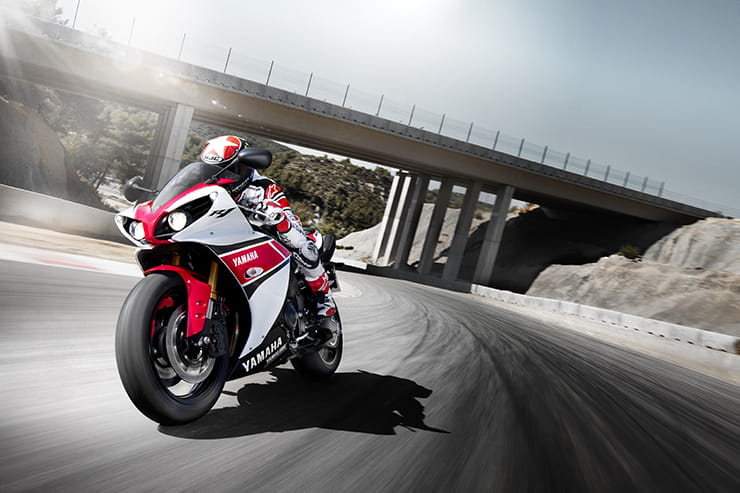 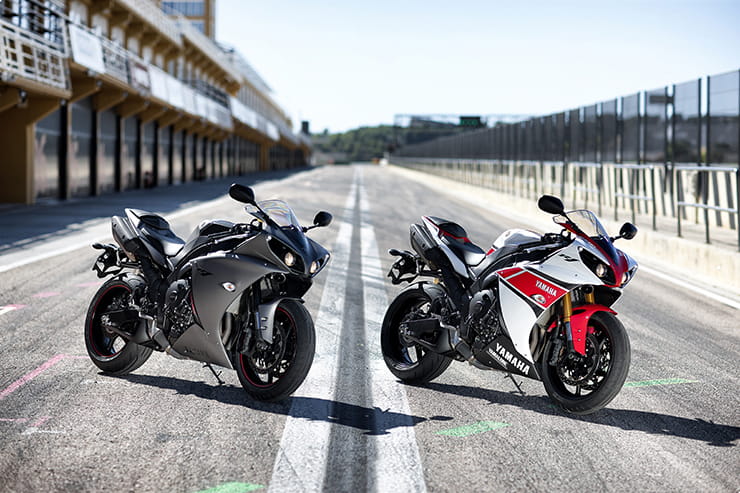 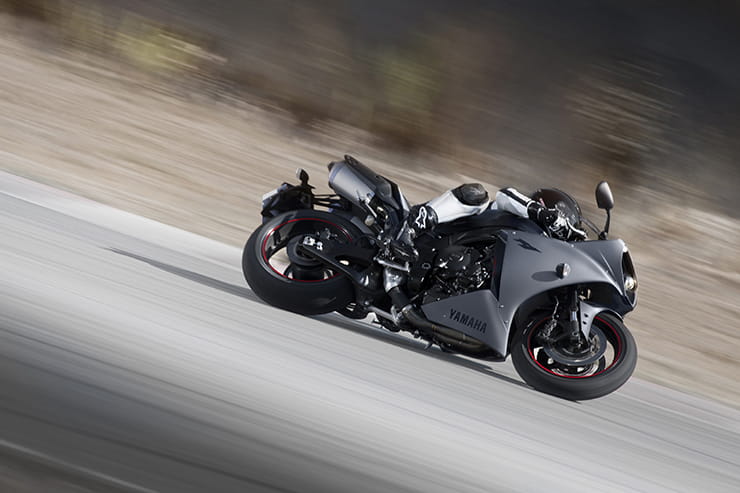 The 2012-2014 Yamaha YZF-R1 is the last of what many consider the more ‘all-rounder’ R1 model, before it morphed into the full-on track refugee generation that arrived in 2015 and is still in showrooms nowadays. The first R1 model to gain traction control (but no ABS) this is the first, and only, update of the first generation of crossplane R1. Not only that, as it arrived in an Anniversary year, it can even be had in a special celebratory paint scheme. A really lovely road bike with bags of soul and lots of mid-range, the 2012 R1 might be a touch on the lardy side but by the same token this extra bulk makes it super stable and a joy to ride. If you want a nicely rounded sportsbike with a small amount of modern technology that with a set of race cans on sounds like Rossi’s YZR-M1, this is the bike for you.

Launched at a time when the financial crisis was still being felt, the R1 didn’t sell in massive numbers and that means it tends to hold its value. Not only that, compared to the very first crossplane model, which cost £9999, this generation’s £13,600 price tag was fairly salty. Prices in a dealership start at £8000 with private sales cutting this by about £700. If you want an Anniversary model, which is technically limited but are actually very common, you are probably looking at £8300 however this premium can probably be haggled away. A late 2014 model might just touch £9000 but it would have to be mint and with a set of quality aftermarket silencers to justify this price tag.

This joy of the crossplane motor is the fact that unlike some inline four rivals such as the Kawasaki ZX-10R, the R1 has bags of midrange torque. On a constant throttle the crossplane is nice and smooth but crack it open and you get lots of vibrations accompanying some meaty drive. A top end of a claimed 182bhp is not to be sniffed at, however the R1 did generally lag slightly behind its rivals in terms of peak power pub bragging rights. What it relied on was its more impressive 85.2 lb-ft of midrange, which is exactly what road riders appreciated.

The first generation of crossplane motor really is a peach and despite being quite a heavy lump due to its substantial balancer shaft (which is required due to the crossplane firing order) it rewards the rider with a truly unique riding experience. Relaxed when necessary yet still able to accelerate with real ferocity, it makes for a soulful and nicely flexible road motor that is also pretty damn good on track – as Ben Spies demonstrated. In the 2012 update Yamaha did revise the ECU settings to make the R1’s slightly aggressive throttle response a bit more controlled (you still get three D-mode power options) but that’s about the only changes to the physical motor. The gearbox is nice and slick as standard and with the clutch issues that did blight the original model now banished, there is little to worry about. Yamaha never sold a quickshifter for the R1 but loads have aftermarket items fitted, so ensure it has been set up correctly as they can damage gearboxes, but aside from a seized EXUP valve or a broken sensor they are incredibly reliable. And the valve clearance check is at 24,000 miles, which is a figure few used bikes have got anywhere near. Towards the end of its life dealers did start to sell the R1 with the official accessory Akrapovic cans fitted as an incentive, if you can get one of these bikes as they make a world of difference to the exhaust note and also help reduce the heat build-up that cooks your leg. That said, the best option is to junk the cats thorough a de-cat link pipe as they are the main culprits responsible for toasted ankles. 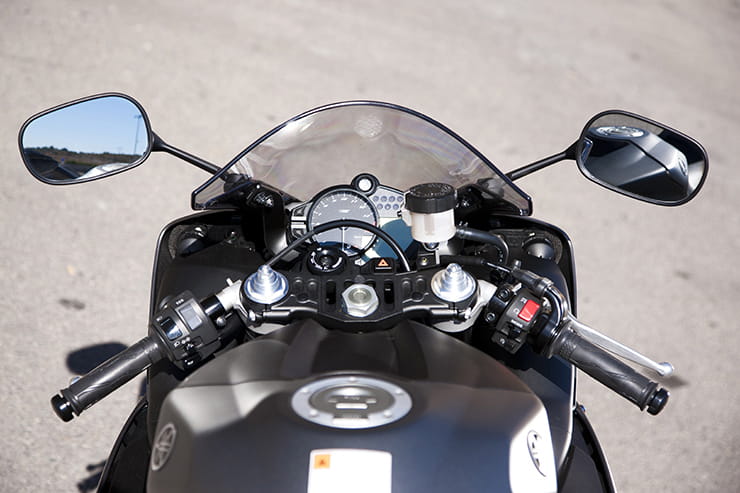 The crossplane R1 is quite a thirsty bike and you will be lucky to get much over 31mpg on a road ride. It has a big 18-litre tank, which is good for about 140 miles, but that is just masking the fact it likes to sup on fuel. Owners report a re-map or adding a fuelling module does help the economy a bit but only by a few mpg.

This generation of R1 is the last one before Yamaha went full-on in terms of track focus and as a result it does feel a touch on the big side. For road riders this is no bad thing at all as it makes the R1 more comfortable than it successor and better suited to taller riders but it does mean its handling is slightly compromised. Far from sluggish, the R1 is a great handling bike but it isn’t as sharp or focused as the ZX-10R, especially on track. That said, the fully-adjustable suspension is excellent and careful set-up by a professional can make them feel a touch sharper to respond and on the road they are wonderfully balanced and neutral in bends. The new ‘MotoGP-style’ top yoke, which arrived in the update, looks great but makes no difference to the bike’s handling. As with any sportsbike, watch out for crash damage and poorly fitted items such as undertrays, mini indicators or number plate brackets but with the R1 the level of build quality is so high very few show their age.

The 2012 bike carries the same monster six-piston calipers as the 2009 (and 2007) model R1s, which grip 310mm discs. Some track riders complain that they can warp but your major worry is the pistons sticking in the caliper, which can happen if they aren’t cared for very well. The minimum service level of the discs is 4.5mm, so check this as they are quite pricey to replace. If you want to boost the power, a set of braided lines makes a big difference and swapping the master cylinder for an aftermarket unit (generally Brembo) will see your soft areas firmly squashed into the tank. 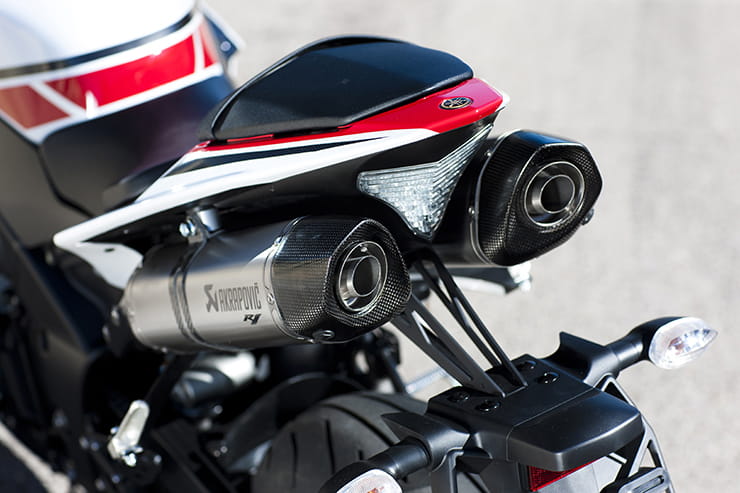 Yamaha’s sportsbikes tend to push you quite far forward and this riding position puts extra strain on your wrists, making the R1 a touch uncomfortable for long distances. A lot of riders take them touring, and it is certainly far more comfortable than the ZX-10R or any Ducati, but it isn’t as relaxed as the equivalent year of Honda Fireblade or Suzuki GSX-R1000. If you are looking at covering distance, fitting an aftermarket double bubble screen is a must as despite its slightly redesigned nose fairing, the 2012 model’s screen is still pretty low.

The six-stage traction control system works on wheel speed sensors but isn’t angle sensitive, which meant even when it was launched it was a bit behind the curve as the S1000RR had already debuted an IMU. A surprisingly effective system that can have its sensitivity altered while on the go, road riders can lean on it with a fair degree of confidence, especially in the wet, and it isn’t bad on track either. The three D-mode power options do make a small difference but most riders just stick the R1 in the middle STD option as the lowest B is a bit lacklustre and the top A one too aggressive. As with most Yamahas, always check the red ‘master’ key is included in the sale or you will struggle to reprogram black copy immobiliser keys. In terms of accessories, while Yamaha did develop a fairly wide range, the only item that riders really go for are the Akrapovic end cans while aftermarket bling such as rearsets, stubby levers, tail tidies and screens are popular additions.

This generation of R1 is a nice bled between old-school useability and practicality with a bit of modern technology in the shape of traction control. As a road sportsbike, it is one of the best of its era and the first crossplane motor remains simply beautiful to use and far less aggressive than its replacement.

Three things we love about the R1… 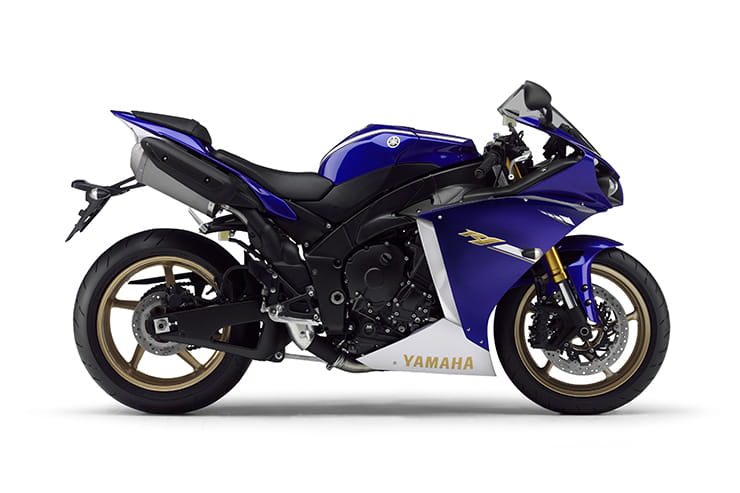 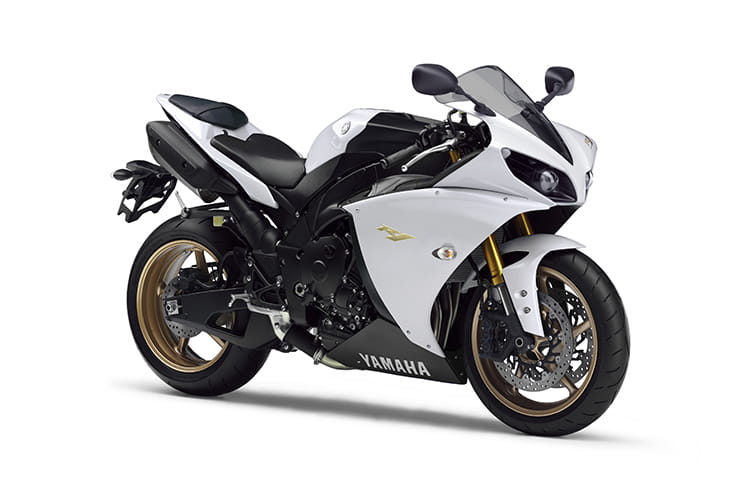