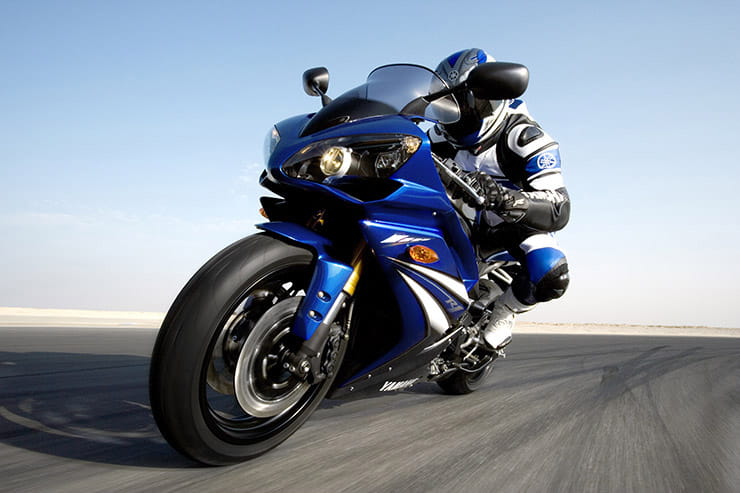 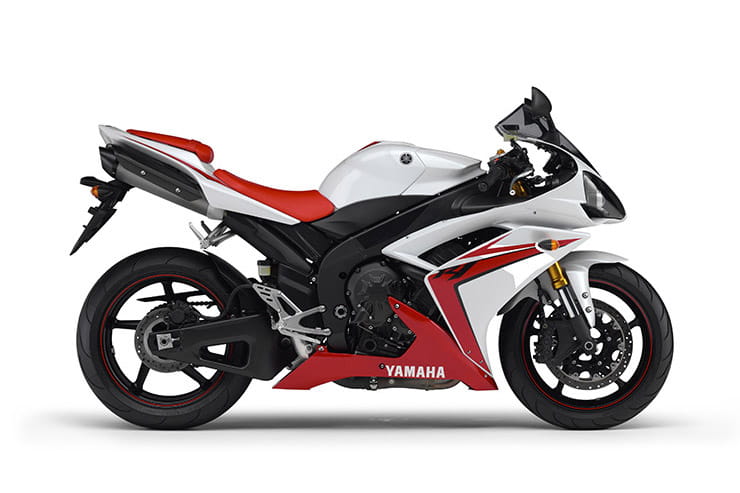 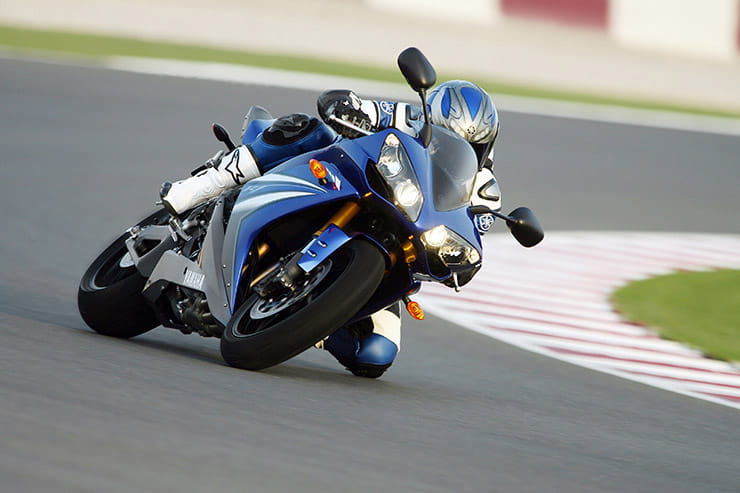 The 2007/08 Yamaha YZF-R1 is a bit of a strange model because it is very much a stop-gap before Yamaha introduced a radical redesign in the shape of the first crossplane R1 in 2009. However that also makes it quite an interesting machine because as well as being the first R1 to gain a ride-by-wire throttle, the 2007 update also marked a radical departure for Yamaha as it was the first top-end sportsbike not to feature the firm’s five-valve head since the FZ750 in introduced the design in 1985. With a reputation for being a bit of a wild old machine due to its top-endy new motor, the 2007/08 YZF-R1 is reminiscent of the bad boy attitude that the original 1998 YZF-R1 came bristling with.

The 2007/08 R1 is a bike that generally slips under the radar and despite the fact it is quite a unique generation, its price is fairly low and isn’t artificially increased through its relative rarity. You can pick up one in a private sale for £3999, which is a lot of bike for your cash, with dealer prices starting at just under £5000. The top end is £6000 in a dealership for a 2007 model and only £500 more for a 2008 bike, which isn’t bad value at all for a fairly high-spec sportsbike that punts out over 180bhp.

This generation’s power and torque output is a bit of a point of debate between riders. The previous model had developed a reputation for being slightly bland in terms of its linear power and so when Yamaha altered the head from a five-valve design to a four-valve one they deliberately gave it quite a top-endy nature. Despite packing a very impressive 180bhp and 83.2lb-ft of torque (claimed), the R1 does need to be up in its rev range to get moving. If you like to thrash a bike then the fact there isn’t much grunt on offer until 6000rpm when it starts to get interested before all-hell breaks loose at 9000rpm and the engine takes off like a scalded cat will appeal, however if you want a more relaxed ride then this bike isn’t for you. In some ways you have to love the fact that Yamaha deliberately made this generation of R1 feel nice and aggressive  to ride, but in others the all or nothing power curve can be frustrating for road use.

The 2007 R1 introduced a whole host of electronics to the R1’s motor as well as removing a valve from each cylinder. In a blaze of acronyms the R1 came with YCC-T (ride-by-wire) and also YCC-I (variable intake trumpets), both of which make quite a significant input to its feel and the ride. The throttle response isn’t great on this bike (a re-map transforms it) and the YCC-I is partly responsible for the abrupt step in its power delivery, so again it is good and bad news. In terms of a used buy, the motor is very solid mechanically-speaking but the electronics are always a worry as if they start to fail it can get very expensive indeed. A common fault is the throttle position sensor failing, which results in a bike that refuses to idle smoothly and is quite pricey to replace as it is tucked away in the depths of the bike. The 2007 R1 was the first R1 to gain a slipper clutch (aside from the SP) and it is a good unit that again is very reliable so you are only feeling out for any slipping or a grabby feel that hints at worn clutch plates. Most R1s come with aftermarket exhausts fitted, which is a good thing because the catalytic converter on the OE system is located right by your ankle, merrily cooking it in summer! Junk the cat through a link pipe and not only will your ankle be considerably cooler, a small bit of mid-range should be released! As on all older used bikes, watch out for seized up EXUP valves and look for fault codes (the old Yamaha tacho-tango where the rev counter sweeps to a number, pauses, returns to zero and then start to display the correct revs again) displayed on the dash. Watch out for bikes with aftermarket autoblippers or quickshifters fitted as the R1’s gearbox wasn’t designed for use with these (especially the blipper) and if not set up correctly they can cause real damage within the gearbox. 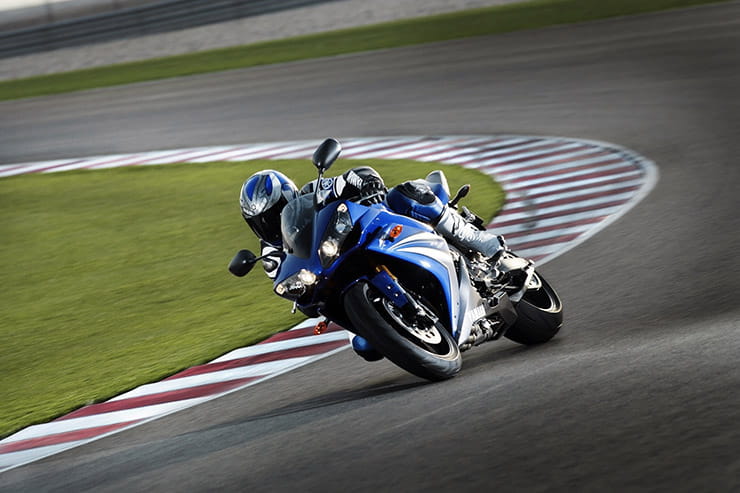 The R1 is a sportsbike and so you are looking at 33mpg if ridden with moderate enthusiasm on the road. Up the pace (or go on track) and this figure plummets as the screaming engine guzzles the octanes.

Alongside its more aggressive motor, Yamaha deliberately gave the 2007/08 R1 sharper handling than its predecessor (they claimed, naturally, through MotoGP-derived technology…) and this generation has an all-new Deltabox frame as well as upgraded suspension. Featuring fully-adjustable forks and a shock that has high and low speed damping adjustment for the first time, the R1 certainly has more urgency in its handling but it still isn’t as sharp as the more track-focused Kawasaki Ninja ZX-10R. Is that a bad thing? Not unless you are a track-fiend and on the road despite the occasional head-shake the R1 is agile and fast-turning without feeling too flighty. The suspension is decent and adjusting it does reward you with a better ride quality but on bikes approaching the 20,000-mile mark the shock is probably past its best and can’t be rebuilt, so you are facing a bill of around £500 for a reasonable quality aftermarket unit. Always check the swingarm and fork bottoms for scrapes as this generation of R1 is quite popular with track riders and these areas are seldom replaced after a spill.

As well as fitting monster six-piston calipers, Yamaha attempted to reduce the unsprung weight on this generation of R1 by decreasing the front discs not only in diameter from 320mm to 310mm but also in thickness. If the bike is used hard on track these can sometimes warp however it is more common to find them reaching their minimum service level of 4.5mm. Always check for wear as they cost about £300 to replace and also for sticking pistons, which is quite common due to their small diameter. 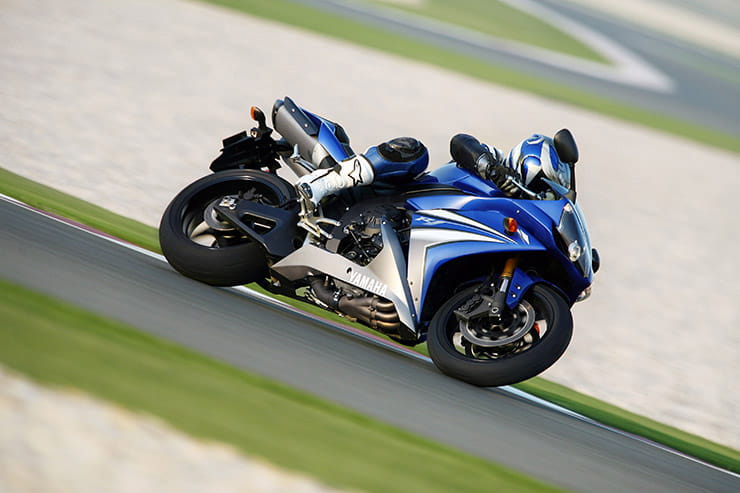 Although some riders do, this R1 isn’t built for touring holidays and the seat (which it has to be said its red colour on the red/white bike is a wonderful nod to the original 1998 R1) is fairly unforgiving and the riding position cramped. Yamaha’s sportsbikes tend to push you quite far forward and this riding position puts extra strain on you wrists. Overall, you can tour on one but it won’t be a particularly pleasant experience.

Does a rev warning light count as a rider aid? Nope, Yamaha kept all the clever electronic for controlling the motor and didn’t add ABS or traction control to this generation. In fact, TC only arrived in 2012 on the R1 where ABS was added even later in 2015 with the all-new model. In terms of accessories, most owners fit new pipes to release a bit of noise and also a de-cat link pipe to stop their feet roasting, rear sets are popular, as are taller screens and stubby levers. Generally, we are talking add-ons rather than major tuning work although a few riders mess around with the airbox and intake funnels (the YCC-I is sometimes disabled), which isn’t recommended. As with most Yamahas, always check the red ‘master’ key is included in the sale or you will struggle to reprogram black copy immobiliser keys.

The 2007/08 R1 is a Marmite bike. Some riders will relish its thrilling and aggressive power delivery as it does give the bike a huge spark of character. Others, however, will find it frustrating that you need to rev a litre sportsbike. If you like this trait, the R1 is well-built, good handling and not badly priced so is certainly worth considering. Not only that, its rarity does add a degree of welcome exclusivity. And it looks ace in red/white! 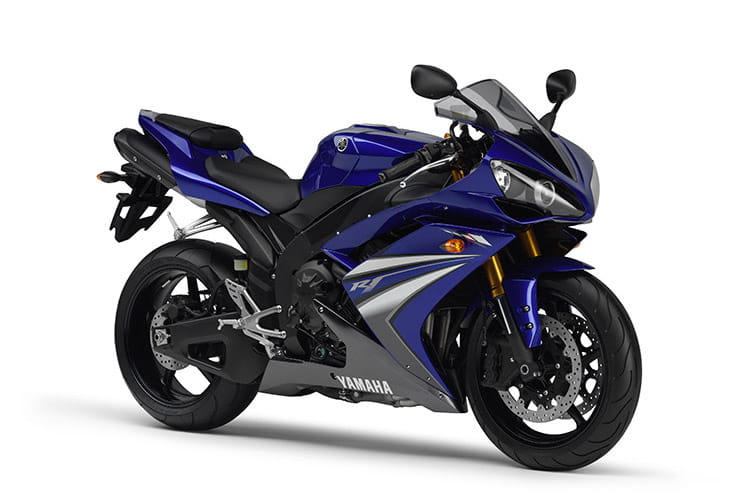