Living up to an older sibling can be difficult. The pressure to perform as well as, or better than them, often causes failure on a colossal scale. Yamaha’s X-Max 250 has that problem, the T-Max pretty much re-wrote the rules on how a scooter should perform. Not an easy act to follow. 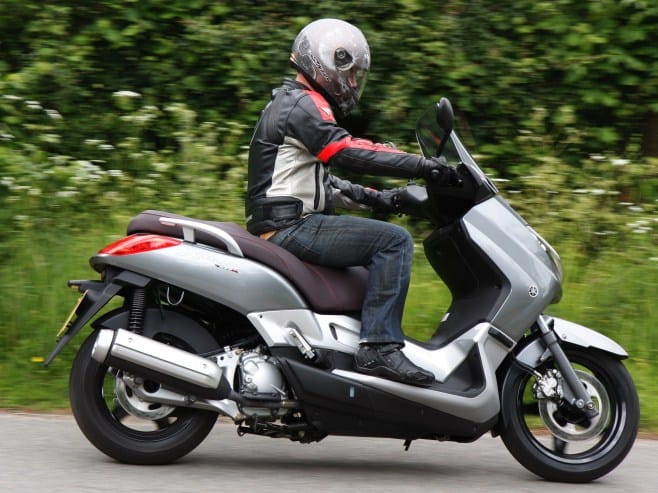 OK, so the X-Max doesn’t quite follow in the T’s footsteps - at 250cc it’s hardly going to challenge it in the performance stakes - but to wear the ‘Max’ moniker, it has to do everything else just as well.

On paper, the X-Max doesn’t sound like it would stand much of a chance: you get a 249cc, liquid-cooled, fuel-injected, four-stroke, single cylinder motor; a tubular steel frame, conventional telescopic front forks and twin shock rear; twin-piston, 267mm front and 240mm rear disc brakes; 15 inch front and 14 inch rear wheels, and that’s about it really. Hardly cutting edge. 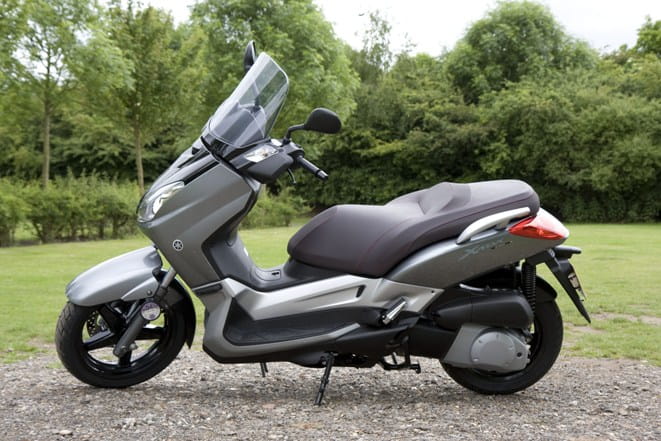 But, you don’t really need fancy ingredients if what you do have are blended together well, and they certainly have been on the X-Max. That basic sounding engine puts out a fairly respectable 21bhp and 15ft-lbs of torque - coming in at 7500 and 6500rpm respectively – and as a result, it's definitely no slouch. Top speed is pretty good for the 250 class at 78mph, and that’s partly down to high gearing. As useful as this is for longer journeys, it does come at the expense of ‘off the line’ performance somewhat and from a standstill the X-Max is a little sluggish, and can catch an unsuspecting rider off guard at junctions and roundabouts. Once higher up the rev range it all starts working very nicely and makes light work of slower moving vehicles in and out of town. Acceleration and response from 30-60mph is impressive, with no apparent flat spots or lag in delivery; cruising at A-road speeds is no problem, and it's even fairly comfortable on motorways and dual carriageways too. 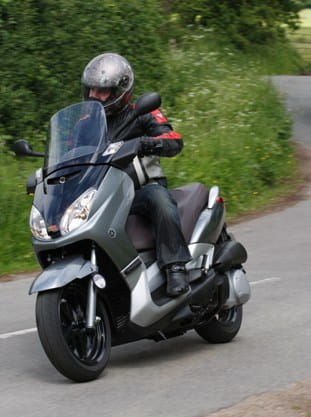 It'd be a shame to restrict the X-Max to major routes though, as it's real party piece is the chassis. Yamaha’s claim of a "motorcycle-style ride" isn’t far of the mark. Unlike its bigger brother the engine, gearbox and drive assembly are laid-out in the conventional scooter fashion - all bolted to the swing arm - but despite this, some clever geometry, good weight distribution and a well sorted chassis give the X-Max impressively sure-footed handling - no surprise really, given than none other than Filippo Corticelli - who worked on the Ducati 999 project - designed the X-Max frame.

The telescopic front forks - non-adjustable, as you'd expect - offer plenty of feel and are well damped, the twin shock rear - adjustable to three positions of pre-load - does the job of keeping the aforementioned engine/gearbox/drive unit under control, and the 15 inch front wheel keeps everything nice and stable. The result is superb balance at low speeds, stability and poise on the open road and cornering confidence that defies the Max's step-through configuration. Even bumpy back roads have a hard job fazing the Yamaha.

If things do get a little beyond the rider's comfort zone, the single disc, twin piston caliper set-ups at front and rear do a sterling job of bringing things back down to earth. Bite is progressive and strong, and feel is pretty good too. Two finger operation is all that's needed to scrub off speed under normal riding conditions, and should the need arise for emergency stopping, the front especially is happy to oblige. There's no sign of wandering off line under heavy braking either. As is the case with most scooters, lever adjustment isn't available, but most hands should have no problem reaching them.

Reaching the floor isn't too much of an issue either. The seat, although fairly wide, is just 755mm from the ground which makes hopping on and off in town and dabbing at lights and junctions a breeze. It's also nice and comfy, and coupled with the semi-sporty riding position and decent size foot boards, it makes for a pleasant place to spend long commutes. 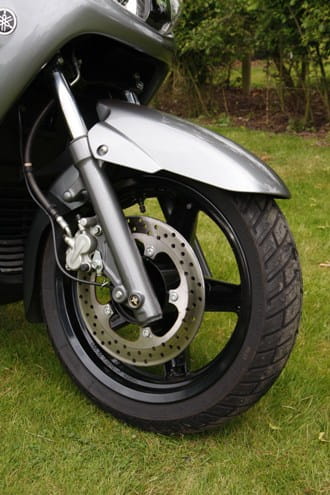 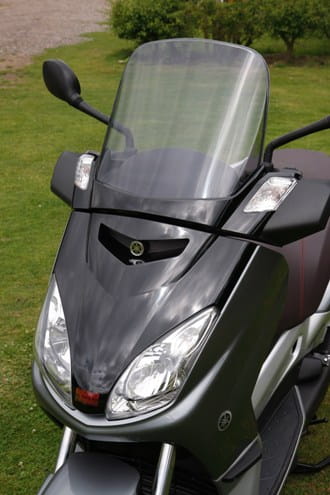 You’ll not be pulling over for fuel much on those long commutes either; a 12.5 litre tank and mpg figures of around 60-70 offers a decent range.

Pillions are pampered too, with a huge seat, proper fold-out foot pegs and chunky grab rails - although on closer inspection, they do seem to be set a little low; if you're planning to take the missus/mister with you on a regular basis, it’s worth a two-up test ride before you commit.

If they do fit, I'm positive the motor and chassis could more than cope with two and I'm definitely convinced the under-seat storage could swallow enough kit for two. It's laid out similar to the current 400 Majesty, with room for a helmet in each end and a bit left over in the middle, plus to stop your bag/clothes/laptop getting wet/covered in fuel, the filler cap is located in the tunnel between the rider's legs. There’s also lockable cubbyhole in the leg shield for smaller items.

Elsewhere, it’s pretty much as you'd expect. Switchgear falls easily to hand/finger and the dash is comprehensive and well presented. It tells the rider everything he/she needs to know with an analogue speedometer, fuel and temperature gauge, plus digital odometer, trip and clock. There's also the usual array of warning lights.

Staying in that general area, the mirrors do a good job of showing what's behind and the screen a fairly decent effort of keeping wind/rain off the rider too - there are also built in hand-guards to keep the worst of the weather off hands and should offer a little bit of protection if your filtering gets a little gung-ho. A nice touch, I thought. As is the steel loop protruding from the offside rear, ideally positioned for a chain lock and saves all that scrabbling about on the floor and sticking hands through filthy wheels. Top marks Yamaha.

Top marks overall really, the X-Max is an impressive package. A strong and flexible motor, allied to a superbly focused chassis, and to top it off, more practical touches than its sporty appearance should allow.

I think it’s definitely worthy of the family name. 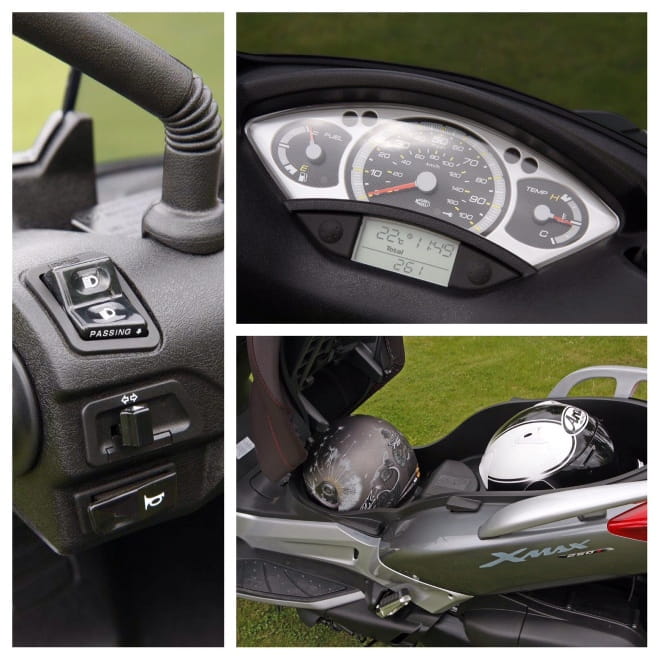 Have you owned or do you currently ride a 250cc scooter? Which is your preference?