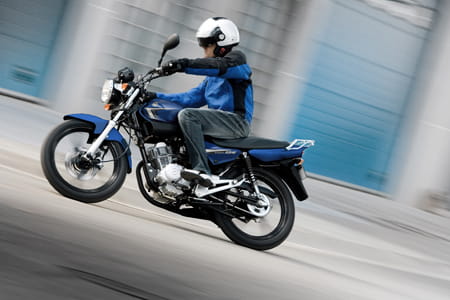 Yamaha’s YBR125 is not adorned in race-replica plastic; it is not a mini-adventure machine; and it definitely isn’t a small capacity custom machine. So, the YBR125 begs a question: why is it consistently one of the top selling motorcycles?

First and foremost the YBR125 is a basic roadster motorcycle that consists of two wheels, an engine and a simple upright seating position. It is a budget learner motorcycle but one built to be durable and fuss-free in operation.

The little 125cc four-stroke single-cylinder engine is very old school by being air-cooled. Not that it makes a big difference at learner level, or indeed as a commuting tool, which it has become very popular at being, especially in big cities.

It’s a sweet running thing and will stand up to a whole heap of throttle abuse as riders try to wring as much acceleration and top speed from it as they possibly can. Not quite sure why this happens when the YBR is so obviously a restricted and emissions-compliant work horse – and governed by final drive gearing to give a smattering of poke and fuel economy at the same time.

Fuel economy is another plus point of the YBR125. Despite all manners of pain being inflicted, the fuel-injected YBR consistently returned an average of 72mpg. It will give a higher figure if ridden conservatively, but getting to and from work is always a case of not wanting to be late and the YBR125 bears the brunt of this.

Small, agile and with supple suspension, the YBR makes for a great bike to cover urban sprawl. The front disc and rear drum brake used together give up excellent stopping power, which is ideal when dealing with sleepy car drivers. Bear in mind, though, savage front braking can lead to the front forks diving to the end of their travel very easily. This is something to remember when riding on worn, wet, grip-less tarmac.

Adding to the YBR’s popularity is the standard fitment of a rear luggage rack for topbox fitment or rolled up waterproofs held by bungee straps. But the real clincher is the YBR125 only costs an affordable £2570. Not bad considering cheap Chinese imports aren’t much cheaper, and the YBR125 has a fearsome reputation for reliability when Chinese imports have yet to come close.