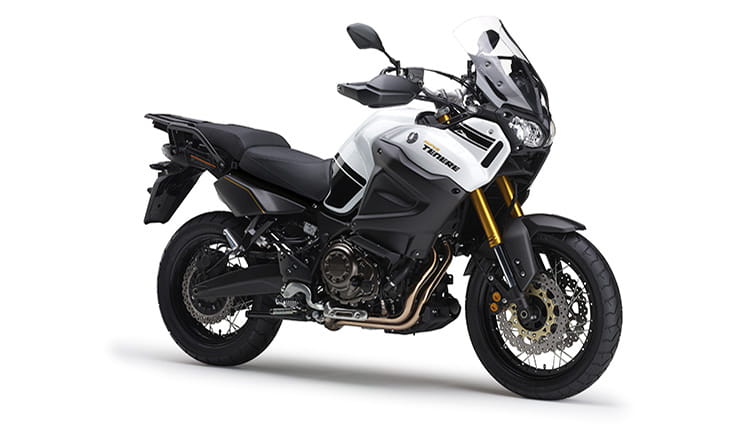 Few bikes can claim the kind of off-road heritage that Yamaha’s Super Ténéré boasts. Dakar winner, world explorer, the Super Ten has done it all and nothing, not even the hottest desert or roughest road, could stop it in its tracks. So, with the large capacity adventure market booming, Yamaha dusted down their iconic brand and in 2010 released an all-new Super Ténéré. Bigger in capacity, loaded with the latest electronic assists and carrying that famous name on its side, the Super Ténéré was back and ready to take on its old adversary, the BMW GS. But with sales far slower than Yamaha expected, the Super Ténéré has tended to languish in dealers’ showrooms, forcing used prices down. Is it the hidden bargain of the secondhand adventure bike world? We reckon so…

Retaining the established parallel twin format of the old XTZ750 Super Ténéré, the all-new XT1200Z Super Ténéré expanded in stature. Now 1199cc with double overhead cams and four valves per cylinder where the old 749cc model used Yamaha’s classic five-valve head, the twin-spark motor has a 270-degree crank with firing intervals of 270 and 450-degrees to create a parallel twin ‘crossplane’ engine. As with the crossplane R1, Yamaha claimed this firing order reduced inertial torque to give better drive, making it ideal for off-road riding. Within the engine, two balancers shafts not only reduce vibrations, but the front one also drives the oil and water pumps while the engine itself has a dry sump with the oil tank located inside the crank case, helping reduce the motor’s height and stop the bike becoming too top-heavy. When you are packing a 23-litre tank, this is an important feature. For the first time the new Super Ténéré also had a shaft drive instead of a chain, which was another hint at its road-biased design.

Yamaha have always been keen to add a fairly high element of sporting into their touring bikes (the FJR1300 is one of the better handling big tourers) and as such Super Ténéré’s chassis was designed to deliver agile handling. While constructed from tubular steel instead of aluminium due to its more rugged nature and ability to deal with the demands of off-road riding, it runs fairly aggressive geometry of 28-degrees rake and 125mm of trail with a 1540mm wheelbase and a 19-inch front wheel with a 17-inch rear. The seat height is adjustable between 845 and 870mm and the shaft drive features rubber dampers to soften its action for a smoother ride. 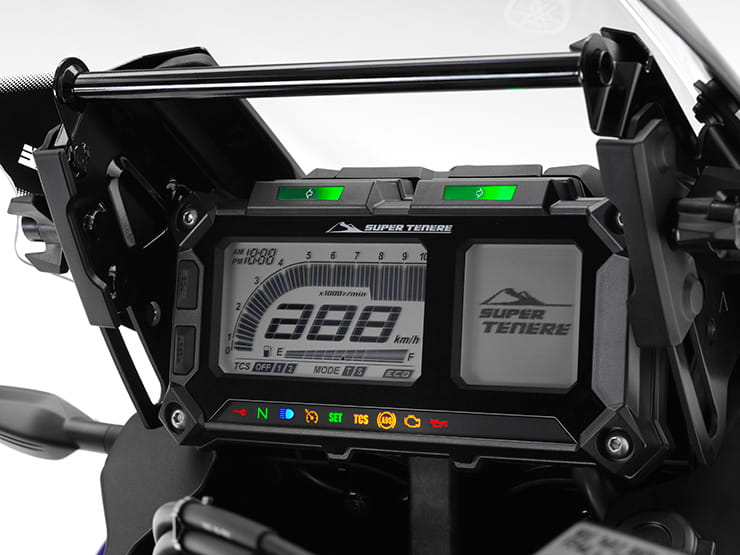 Giving the Super Ténéré 205mm of ground clearance are 43mm fully-adjustable inverted forks and a monoshock with adjustable spring preload and rebound damping. The stock Z model has conventional suspension while the ZE, which was introduced in 2014, comes with electronically adjustable suspension. It’s not semi-active, but can have its damping altered while on the go to one of 84 different combinations of damping settings through four preload and three damping force settings.

Yamaha armed the Super Ténéré with their Intelligent Unified Brake System, which comes with ABS as standard and in 2010 was claimed to be the firm’s most advanced braking system to date. The system continually monitors the bike’s movement through various sensors and then calculates the point just before the wheel is likely to slip and automatically alters the brake pressure between the front and rear calipers to balance out the bike’s braking forces. Pulling the front lever applies the front and rear brake while the rear pedal activates only the rear brake. The system even monitors how much weight the bike is carrying and the speed it is travelling at and at slow speed allows precise rear brake control by applying it before the front brake. The front calipers are four-piston ‘gold spot’ (later silver) units taken from the R1 with 310mm discs while the rear caliper is a single piston unit with a 282mm disc.

By 2010 Yamaha were well on track when it came to electronics and the Super Ténéré arrived not only with the firm’s Intelligent Unified Brake System, but also YCC-T (ride-by-wire). This system allowed the fitment of two power modes, Sport and Touring, as well as a three-stage traction control system. The 2014-onwards models added cruise control as well as electronic suspension on the ZE model and T became ‘town’ mode. 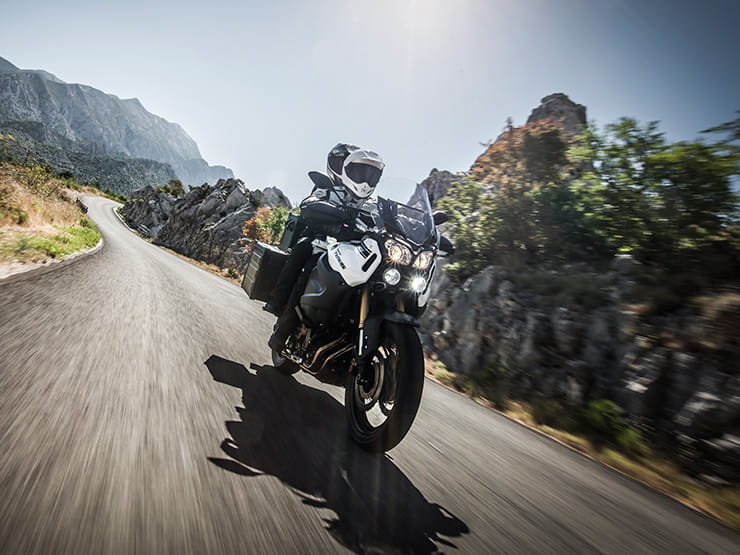 The Super Ténéré is a tall bike, but thanks to its narrow waist it isn’t as intimidating as you would expect. The riding position is typical adventure bike comfortable and thanks to a four-position manually-adjustable screen (on post-2014 models) and brush guards as standard, weather protection is good. It’s a genuine all-day comfortable bike.

While the large hard panniers may get in the way slightly if fitted, pillions will appreciate the Super Ténéré’s comfort levels, especially with a top box to lean up against. It’s a great pillion bike, however shorter riders may struggle a bit with the added weight as a pillion and luggage does tend to make it a big old beast, especially at low speed.

The adventure bike market is a tough nut to crack, mainly because of one model, BMW’s all conquering R1200GS. When it comes to a bike that looks like it could circumnavigate the world tomorrow, few do it better, or with such a reputation, as the BMW. Which is the obstacle that Yamaha has struggled to overcome with the Super Ténéré.
Despite having some pedigree in the Adventure market with the original Super Ténéré, the latest model has failed to set rider’s pulses racing. Part of this is certainly the price tag, however as Yamaha are quick to point out, the bike is built to a very high standard with quality components.
They have a point, the Ténéré is well built and comes with traction control and ABS as standard, something that appeals to its potential owners. It also has a maintenance free shaft-drive (no nasty chain lube), wide bars, comfortable seat and protective fairing. So what’s the problem?
Well nothing really. To ride the Super Ténéré is very pleasant. The parallel twin engine burbles away and has a pleasing vibration that gives it a bit of character. It has more than enough grunt for road riding, one or two-up, and is remarkably comfortable. As with all adventure bikes the  handling can feel a bit top heavy and soft on its suspension, but that’s just what you get with long-travel forks and a bike that is designed to handle rough terrain and therefore has the ground clearance to get over obstacles.
A lot of riders buy the GS on its reputation and while there is no doubting it is an excellent machine, few ever venture more off-road than a gravel drive. It’s the same story with the Super Tenere but where there seems to be a GS parked on every European street corner, the Yamaha is far more exclusive, which makes it quite appealing. It’s a shame the price detracts slightly from this appeal.

When you ride a Super Ténéré in isolation it is hard to understand just how it has failed to sell. Yes, it’s a big bike, but that’s what you get with an adventure-styled  machine and if you have little interest in off-road riding the Ténéré’s size actually makes it a better road machine, much like the current Triumph Tiger 1200.

Once on the open road the parallel twin’s power is a welcome plus point, making the Yamaha feel surprisingly zippy when required and also packing a lot of mid-range grunt and drive. It’s a fabulous engine that while lacking a bit of the character and feel you get from rival twins, is refined, smooth and a joy to use. And its electronic assists, while lacking and angle-sensitivity or semi-active features, are good and add to the refinement of the overall package without getting too over-complicated.

Super Ténéré owners are more than happy to shout about the virtues of their bike, and rightly so. Yes it’s a bit more old-school than its latest rivals, but the Yamaha is a fantastically well built, reliable and ruthlessly efficient adventure bike that carries a famous name on its side and is something a little different to a GS. And a damn sight cheaper to boot! 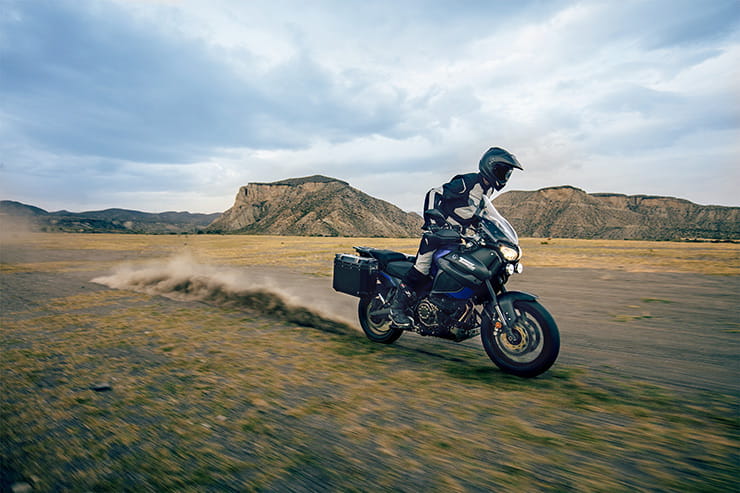 Generally the Super Ténéré is a solid machine, and owners are very pleased with the overall level of build quality, but it does have a few niggles.

The detensioner spring on the gear shift rod can stretch or wear, causing the gear change to become very poor. It’s a cheap part to replace, but annoying none the less and some riders even resort to carrying a spare when on a touring holiday. There are occasional reports of water collecting around the spark plug caps, which can lead to corrosion and a miss-fire, but these are rare and should be picked up at service time by a decent mechanic. The same goes for the occasional rusted or broken spoke/nipple, which again is very rare as Super Ténéré seldom venture off-road. That said, always check the wheel rims for dents and also the sump guard as when buying a used bike you really want one that has been used exclusively on the road, not hammered down a gravel path or two.

There are a few cheap high mileage Super Ténérés out there and while the engine is very solid and can happily take distance work, you need to check consumable items such as suspension seals, shaft drive seals etc for wear and tear as the cost of a suspension rebuild/shock replacement can quickly off-set any savings you have made, especially on electronic suspension models. And always ensure the 24,000 valve-clearance service has been completed on any high-mileage machines as it is a biggy. 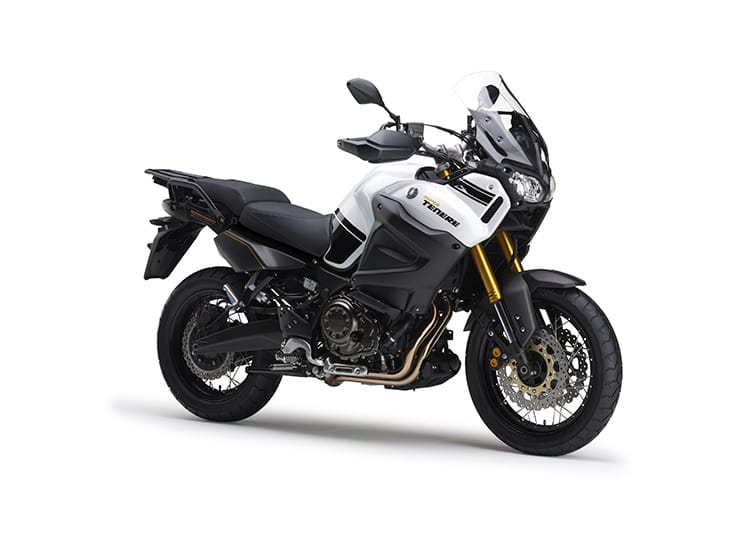 The Super Ténéré was released in 2010 and received its first update in 2014 when it was joined by the ZE model with its electronically adjustable suspension. Both bikes feature a motor with enlarged intake and exhaust ports, revised cams and a new exhaust system. A rubber shock absorbing system was also added to the clutch and the shaft’s damper improved. Power modes were refined with T now ‘town’ and S still ‘sport’ with T altered to be easy in urban use with more manageable engine performance. The LCD dash was also updated with a gear indicator, a 4-posiiton screen added and cruise control fitted as standard. In 2018 the Raid Edition added luggage, a taller screen and more off-road features to the ZE model. 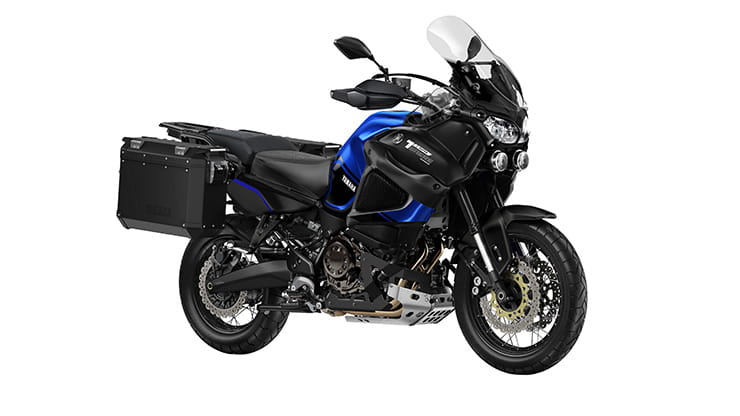 You can pick up an early model Super Ténéré with a fairly high mileage (around 50,000) for under £5000, which isn’t bad value but by spending around £500 more you can halve this mileage, which is worth doing. Push the boat out to £6000-£6500 and you will get one with under 20,000 on its clocks and full luggage, which is worth considering if you plan to tour a lot. An updated 2014 model will set you back between £7000 and £8000 with luggage and mileage effecting its price.