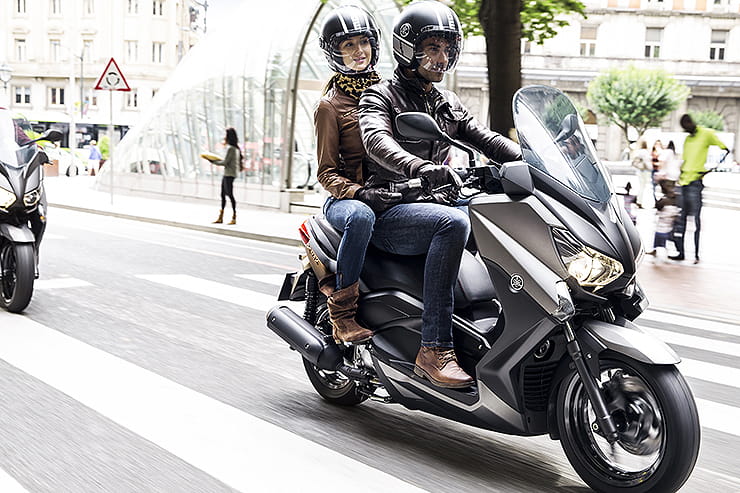 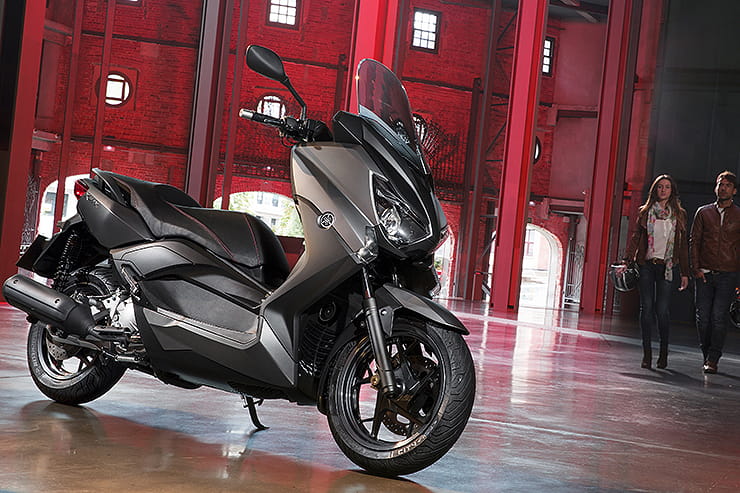 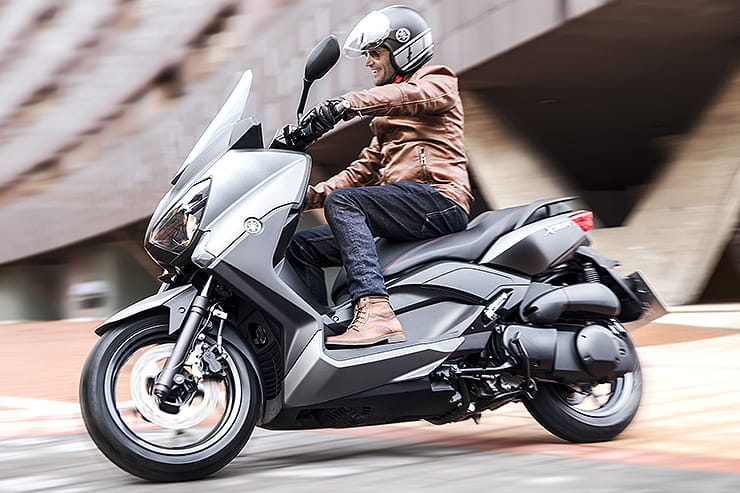 Yamaha’s X-Max 250 has been a big hit for the firm and during its 12 year lifespan (which includes two small updates, one in 2010 and again in 2013, which was a bit more involved) it has sold in very respectable numbers throughout Europe, peaking at 19,232 in 2007. A bike that populates city centres, the X-Max might not be that flashy, however what it offers is lightweight, practical and cheap commuting in a scooter with a known and trusted brand name on its tank. Or more precisely its fairing as the tank is hidden under it somewhere...

The X-Max is a fairly small capacity and pretty basic single cylinder motor so you can’t expect a great deal from it. Producing a claimed 20.1bhp with 15.5lb-ft of torque it has enough oomph to zip away from lights and hit an indicated top speed of 78mph (after quite a run-up – downhill) but this is effectively a solo-only bike and the extra weight of a pillion really makes it struggle. The Yamaha’s lack of power means you need to be careful when pulling into fast moving traffic as it doesn’t quite have that instant acceleration you often need to nip into a gap.

Due to its fairly basic nature the single cylinder motor is very reliable but owners report the standard exhaust is prone to rusting as it gets a bit hot, so watch out for holes. A replacement is fairly cheap as well as better built so it isn’t a huge issue as long as the studs aren’t too badly corroded. The engine should be serviced every 6000 miles but by now most will be well past this and owners often do it themselves rather than pay a dealer as it is a pretty easy job. The plug needs changing every 18,000 miles alongside the valve clearances being checked however the engine oil is inspected when the oil change light comes on (every 1800 miles), which is handy. Yamaha state the V-belt needs swapping at the 12,000-mile mark, which is a bit more complicated and often gets missed so ask when it was last changed. 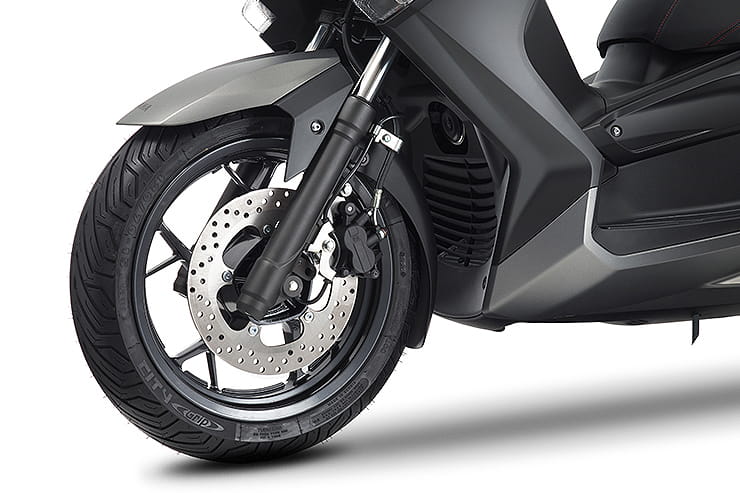 You can expect to record economy figures between 60mpg and 70mpg, which is fairly respectable for a full-dress scooter being pulled along by a small capacity motor. With this in mind, a full tank should last over 150 miles.

Oddly enough, the same man who helped design the Ducati 999 frame, Filippo Corticelli, also worked on the X-Max 250’s frame, and he has done a good job. Helped by its light weight the X-Max is a reasonable handling scooter that can be zipped through congested city streets with ease. On the open roads it is pleasingly sure-footed and although the forks lack any damping and the shocks only have minimal adjustments of spring preload it isn’t a bad ride at all. Although the seat is wide to make the X-Max nice and comfortable, a low seat height means that you never feel that your feet are too far from the ground. The 2013 update model features revised suspension and larger diameter wheels alongside a high-spec dash.

Basic is the word and the single disc set-up Yamaha use is never going to leave you wowed. It does the job but lacks any form of ABS until 2013 when it was an optional extra and the lever lacks a span adjuster. That said, they are nice and cheap to rebuild should they get corroded and start to stick on their sliders. 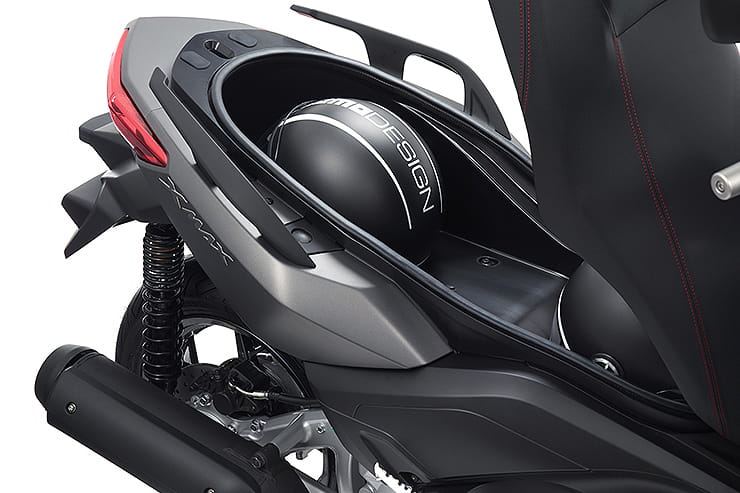 Touring isn’t really an option as the 250 is a bit limited in terms of speed but for a commute it is extremely comfortable with a tall screen and relaxed stance. The riding position is ‘semi-sporty’ but you have decent sized foot boards to stretch your legs out on. The underseat storage is excellent and there is also a lockable cubbyhole in the leg shield.

You get a fuel gauge, LCD info panel and an oil warning light, that’s about it although later bikes did feature improved instruments. ABS did arrive in 2013, but only as an optional extra. In terms of accessories, as you would imagine on such a popular model there is a fair array of commuting-based items such as luggage and screens as well as replacements for ‘consumables’ such as the rusty exhaust, brake pads, spark plug etc. Most owners fit a scooter apron, taller screen and top box and leave it at that, until the OE exhaust rusts through...

The X-Max 250 is a hugely popular bike in Europe but in the UK it is viewed far more as ‘cheap urban transport.’ Buy one for this role and you will be very happy as it is excellent in town and very cheap to both buy and run. It’s not that exciting or flashy but it does all that is asked of it with minimal fuss.

Three things we love about the X-Max…

"I had one…" - Michael Mann, BikeSocial’s Web Editor

Just hearing the name ‘X-Max 250’ brings happy memories. I lived and worked and therefore commuted in central London for several years back in the noughties. Having passed my full licence, I bought a Fazer then upgraded to a VFR800 (pre-VTech) but neither were ideal, until the Yamaha cropped up on Autotrader, all the way from Liverpool. It was the perfect machine for my circumstances with plenty of underseat storage and more than enough power to zip through London’s streets. Day or night everywhere seemed no more than 15 minutes away, so ‘Sally Scooter’ became like my bestie. Looks-wise, there were none better – it was big enough to be comfortable and for stability while small enough to be classed as ‘nippy’, and the clinical (and possibly cynical) way I could carve through traffic and beat anything from A-to-B around our capital gave the ego a great boost. I felt like the king of the streets. It’d comfortably sit at 70mph on the motorway too and the weather protection was more than decent. Moved out of London. Sold her. Miss her. 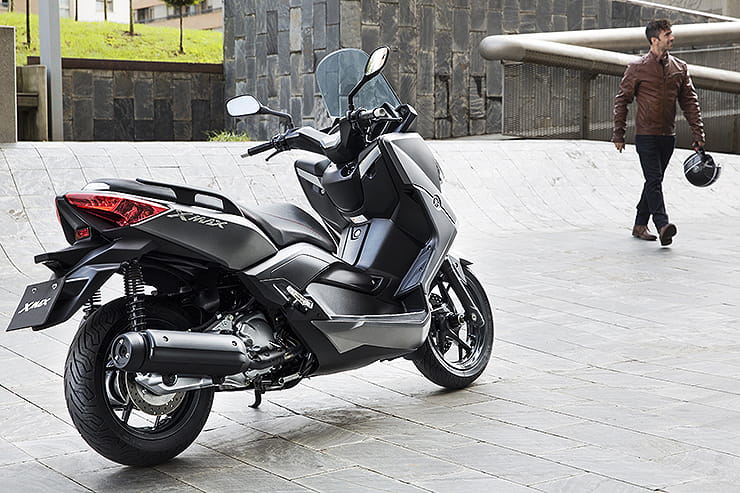 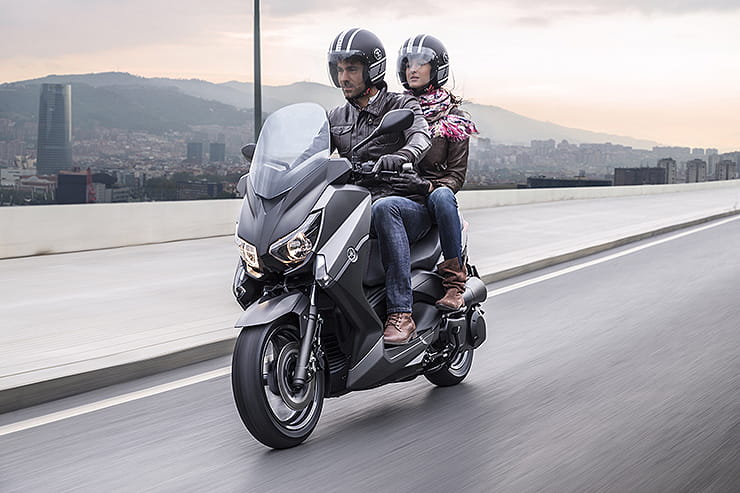