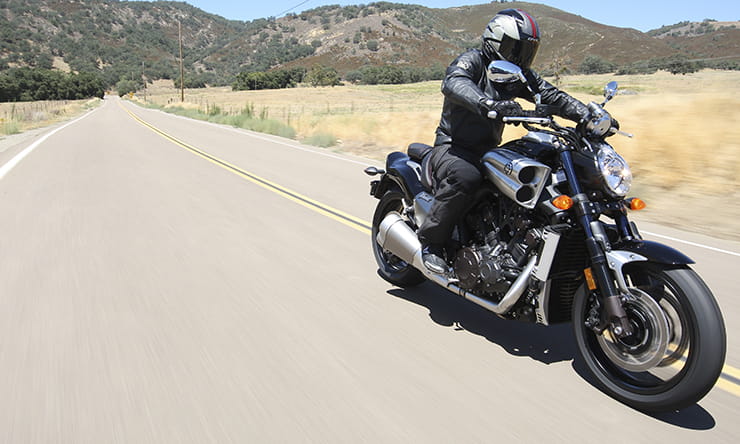 In 2009, Yamaha reinvented their legendary V-Max, a bike that had defined an era thanks to its powerful V4 motor and V-Boost system that helped it produce an impressive 138bhp. In 1985, when the V-Max first appeared, these kind of power figures in a cruiser style of bike were unheard of and very soon a cult built up around the Yamaha that saw its production run last until 2007 (it was no longer officially imported into the UK from 2004). The all-new VMAX (note the difference in spelling) aimed to use modern design and technology to reinvent Yamaha’s iconic power cruiser for the 21st century. While there was no denying the quality of the VMAX, or its performance credentials thanks to its new V4 kicking out a claimed 197bhp, there was one sticking point – price. Entering the market (in the middle of the financial crisis) at £16,000 the VMAX was pricey, but when this increased to a wallet-melting £21,450 as the years rolled past, sales all but dried up for this incredible machine and it dropped out of Yamaha’s model range as Euro4 regulations came into force. 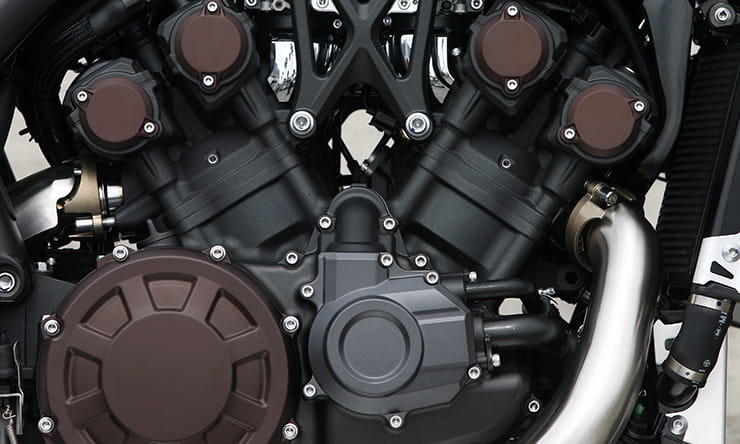 The heart of the VMAX has always been its V4 motor and while the new model lacked the old bike’s V-Boost system, it was in no way left lacking in the power department. The all-new 1679cc 65-degree V4 boasted double overhead cams, liquid-cooling and a whopping 197bhp that was backed up by 123ftlb of grunt. Thanks to its size (it was 40% bigger than the old V-Max’s 1197cc capacity) the VMAX had certainly grown some extra muscles! But it was also very impressively engineered. Yamaha designed a pent-roof combustion chamber, which increased efficiency, and to make the head even more compact they also devised a clever central cam chain system where the chain only turned the intake cams, which then turned the exhaust cams via a gear (a similar system is used on the Aprilia RSV4). Add to this a narrow valve angle of 14-degres on the intake and 15-degrees on the exhaust, not to mention a whole host of electronics, forged aluminium pistons, fracture-split con rods and magnesium covers and the VMAX went a long way to justifying its price tag. Impressively, the new motor was actually the same width as the old V-Max’s engine. 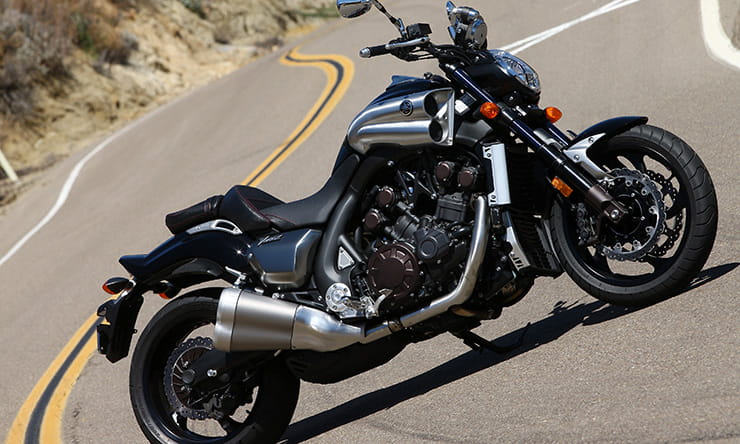 Yamaha wanted to ensure the VMAX didn’t have the ‘wobbly shopping trolley with a rocket strapped to it’ feel of the old V-Max and therefore over-engineered its chassis. The aluminium frame spars arc over the top of the V4 engine and pivot on a semi-loop, not only adding strength but also giving the VMAX some visual presence. The rest of the frame is a diamond type construction that combines gravity-cast, CF die-case and extruded aluminium sections with the swingarm pivot area and main frame gravity-cast and the subframe CF die-cast sections that are welded to extruded parts. This combination of types of aluminium gives a unique rigidity, which Yamaha specifically fine-tuned for the VMAX. The swingarm contains a shaft drive system with the 18-inch rear wheel a massive 200/50 section and the front also an 18-inch item with a 120/70 section.

It’s hard to miss the VMAX’s massive 52mm forks, made even the more impressive with their oxidized titanium coating that increases the surface hardness, therefore reducing stiction, but also looking mega! The forks are held by a cast aluminium upper triple clamp and forged aluminium lower clamp. Both the forks and monoshock are fully-adjustable with the shock also featuring a remote preload adjuster. 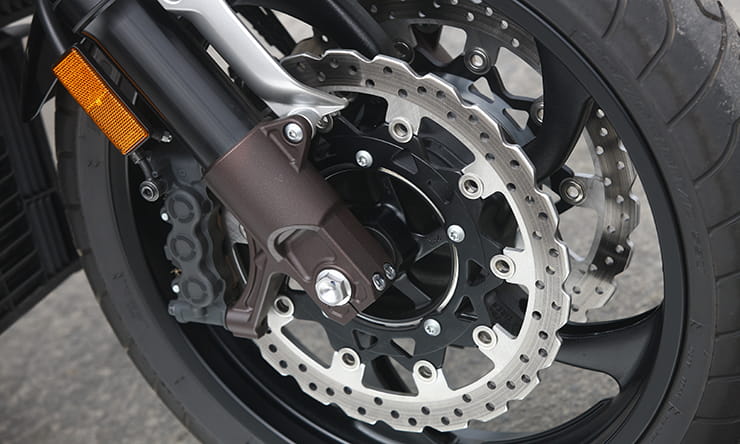 Taken from the 2008 YZF-R1, the VMAX’s huge six-piston radial calipers grip 320mm wave-type discs while the rear is a single-piston caliper with a 298mm wave-type disc. These brakes were linked to a linear-controlled ABS system, which was claimed to give a smooth feel at the lever and was developed specifically for the VMAX. 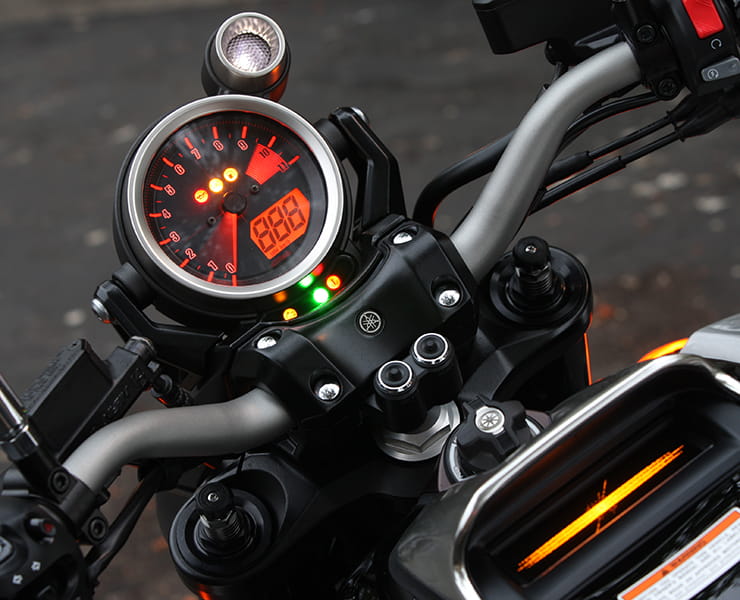 The VMAX arrived well before traction control, but Yamaha were pioneers of some electrical systems and the VMAX gained Yamaha’s YCC-I (Yamaha Chip Controlled Intake) and YCC-T (Yamaha Chip Controlled Throttle) – which is ride-by-wire and variable intake trumpets to you and me. An immobilisor was standard fitment, as was ABS, and the dash was pleasingly split between the analogue rev counter with a separate shift light and a digital tank-mounted dash, which also contained a gear indicator. And it didn’t stop there… As well as a real-time throttle position indicator, the VMAX could be set to count down from five to zero (using the gear indicator) before starting a stopwatch to allow you to time your drag races! 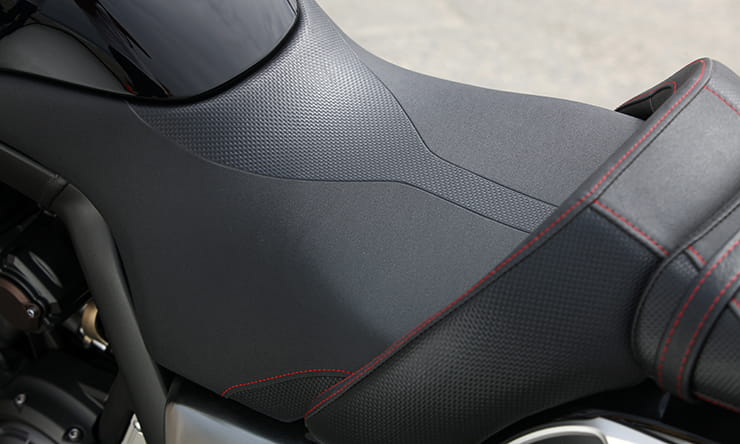 The VMAX is a big old muscle cruiser and while it lacks feet-forward controls, and instead has conventional mid-mounted pegs, it still has wide bars and a relaxed riding position. For cruising around on it is comfortable at sub-70mph speeds, but due to its small 15-litre tank (which sees the reserve light come on at 80 miles) you aren’t in the saddle long enough to get too uncomfortable…

The VMAX has a pillion seat, but it isn’t very comfortable at all and is pretty tiny. One for smaller pillions only… 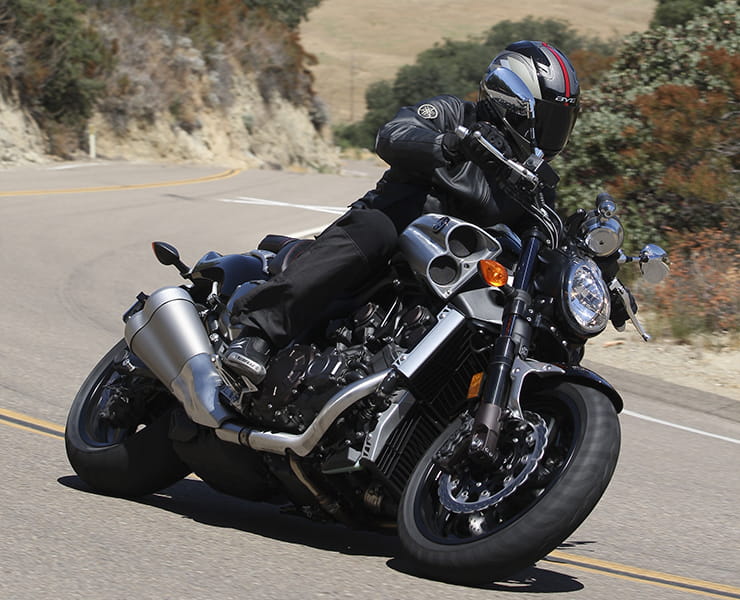 The 2009 Yamaha VMAX performance is just breath-taking a massive 197bhp at just 9000rpm and an awesome 122lbft of torque to take you to a top speed of 143mph. This is a bike for the open road and the adrenaline rush of real riding.

Yamaha have kept faith with the spirit of the original ground breaking bike, right down to the hand-finished aluminium intake covers, while subtly adding in new and equally revolutionary features. The digital information centre provides a huge array of statistics, from throttle position to miles per gallon, as well as that all important stopwatch…

So does the heart-stopping performance justify the heartache of the huge price tag and the top bracket motorbike insurance quote that will inevitably come with it? It depends on where you're sitting. From the saddle, seeing heads turn and eyes stare as the rubber burns and faring gleams, hearing this impressive motorcycle's monster voice growl and roar as it springs into action, it's worth every single penny. And while Bennetts can't help you with the salary-sized price tag, at least our Yamaha Bike Insurance quote could keep your extra costs as low as possible. 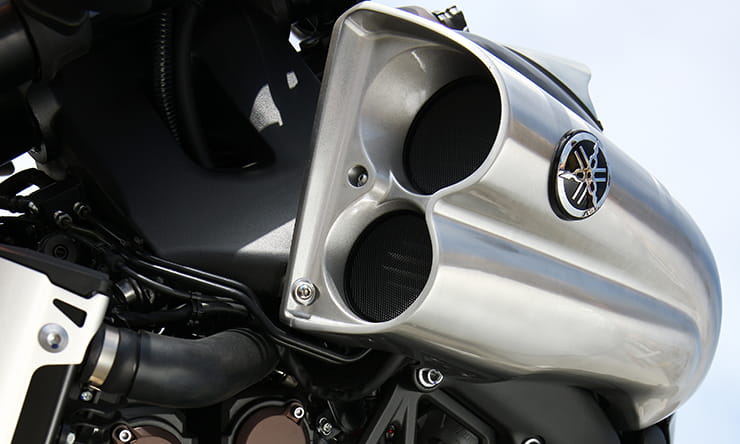 A few years ago the VMAX remained an impressive power cruiser, but nowadays the Ducati Diavel brings exactly what the VMAX does to the table, but with a lighter weight and far more agile handling. So if you want the ultimate power cruiser, while the VMAX still tops the bhp figures, in reality the Diavel will run rings around it on most roads. But that’s not really what the VMAX is about.

As a piece of staggering motorcycle engineering, few machines have the sheer presence of the VMAX. It really is one stunning bike to look at and the power of the V4 motor remains impressive to this day. The fact it lacks electronic assists means you can smoke its rear tyre away from the lights should you feel the urge and the handling is surprisingly good for a bike that weighs a hefty 310kg wet. Yamaha really pushed the boat out in 2009 when they designed the VMAX and this level of dedication and precision still shines through nowadays. And it still costs a bloody fortune!

The VMAX is an incredibly well engineered and there are very, very few issues to be wary of. A few owners have reported leaks from the shaft drive and there was a spate of oil pump issues, but these were quickly sorted out by Yamaha. The bike’s 18-inch wheels do limit your choice of tyres, but this is hardly a reason to avoid ownership. The biggest issue when buying a used VMAX is locating one as Yamaha sold very few and most are cherished by their owners, which means they hold their residual value and prices are a bit scary. Generally any that pop up for sale have a full service history (which is good) and are very clean and tidy, but that’s what you would expect on a used bike that costs over £10,000! Just watch out for odd servicing costs such as the brake lines needing changing every four years, the air filter replaced at 24,000-miles and the bearings regreased at 16,000-miles.

Aside from colours, the VMAX was never updated or substantially modified.

Due to its high initial price tag and exclusivity, the cheapest VMAX will set you back in the region of £10,000, which is hardly a bargain considering the bike was £16,000 nearly ten years ago! A later model will cost you closer to £13,000, which is more a reflection of how the VMAX’s RRP increased over the years. Buy an early bike with a low mileage and you don’t be disappointed. 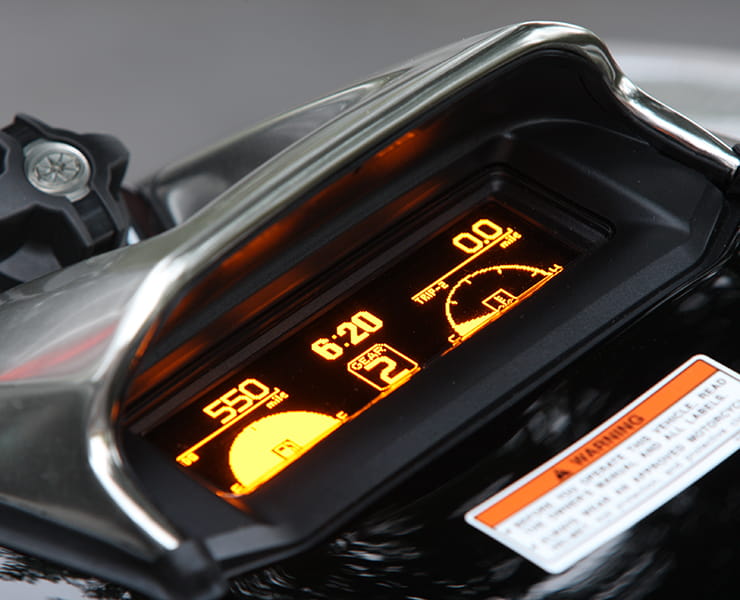