When a new bike hits the market I often refer to the success (or not) of a predecessor or model variant but when Yamaha introduced the Tracer 700 at the press launch on Sunday evening, they also revealed some interesting stats to underline the domination of their MT range. The Japanese manufacturer really has struck gold.

For instance, since its arrival in January 2015, 15,000 MT-09 Tracers have sold which represents a market share of 35% in a segment including Versys', V-Stroms and Tigers. Here's another: since the launch of the cross plane 689cc twin cylinder engine three years ago which powers the MT-07 and XSR 700, 95,000 have sold around the world.

So when Yamaha announce they're to use the CP2 engine once more, we listened. 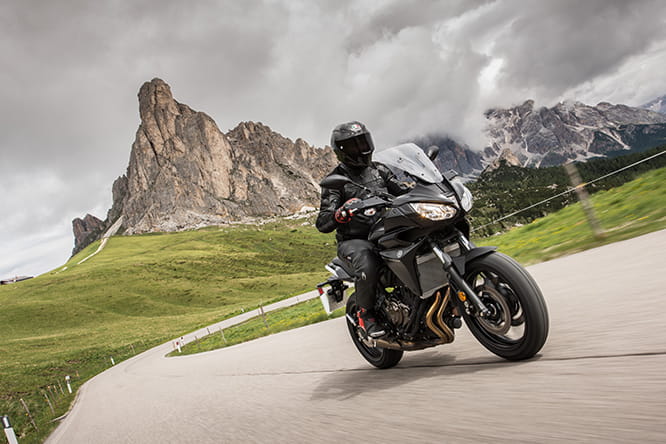 The taller, touring version of the MT-07 had been anticipated for a while but what did come as a surprise was its name. While MT-09 Tracer followed MT-09, when Yamaha took the lid off the twin cylinder version it was named Tracer 700. Why?

So say Yamaha, it's because the MT range is for grungier hyper-nakeds while the sports tourers deserved their own designation and marketing campaign which is also why the MT-09 Tracer has been renamed as Tracer 900. Though the confusion doesn't end there because when the assembled journalists were introduced to the newest member of Yamaha's model range it still had an MT-07 sticker on the fairing!

Not to worry. What we knew by this point is that by taking into consideration the sales figures plus effort, budget and drama afforded to this press launch, which is often a reference as to how popular the manufacturer sees its new offering, the cat was out of the bag; Yamaha are clearly expecting the Tracer 700 to trouble the new registration charts in the coming months.

Price is of course can be a deciding factor for many so while on paper the Yamaha appears to be an obvious choice for a tall, middleweight sports tourer, the range of accessories costing a little extra start to creep into a purchase. Taller screen, heated grips, comfort seat and an Akrapovic exhaust are among those on offer. 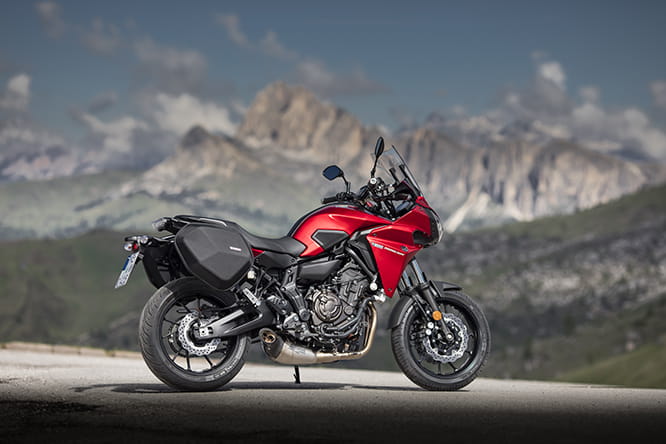 How does it differ from the MT-07?

The most obvious difference is staring you in face: fairings and height. Weather protection on the tourer comes from an adjustable windscreen via the two screw knobs on the inside of the screen with a 64mm range. Hand guards and leg protection from the Fazer-esque fairings also help the aesthetics and aerodynamics of the Yamaha. It is a grown-up looking bike.

The fuel tank at 17 litres, is 3 litres larger than the naked version and offers a hearty yet claimed 230 miles albeit I saw an indicated 45mpg on test which equates to 168 miles. OK, that seems a big difference but the pace on the press launch was hot and the amount of hairpins bends with constant braking and accelerating using mainly the first three gears is not a fair representation of its true economy.  Incidentally, the MT-07’s tank holds 14 litres and during out Lightweight TT bike test achieved 39.6mpg.

The Tracer 700 is a more stable and better behaved bike than its fruitier sibling. It’s not as wheelie happy and is more comfortable to ride thanks to it’s longer wheelbase created because the new, aluminium swingarm has been extended by 50mm. In conjunction with new rear shock settings and a new rear linkage design makes for improved comfort and a lot less sag which was the MT-07s biggest issue. At the front, a revised spring rate and damping settings have also improved the 130mm travel. All adding to a more refined ride when on tour, two-up or with luggage.

Also adding to the comfort is the riding position. While the foot pegs are at the same height, the seat and bars have been raised with the bars also a little closer to the rider giving a more upright position, the seat height being 30mm taller at 835mm.

A one-piece touring seat has a handily positioned pad between the lower rider portion of the saddle which is ideal to rest against when in touring mode. Equally, the narrow waist allows for a sportier position when pushing on.

The adjustable screen doesn’t look much but even at 6ft tall I had no concerns about being buffeted around. There is a high screen option but I’d give the standard one a go first.

Other differences include a double headlight vs the MT’s single one making it look very similar to a late-90s FZS600 Fazer, an accessory mount on the handle bar plus aluminium passenger grabrails. 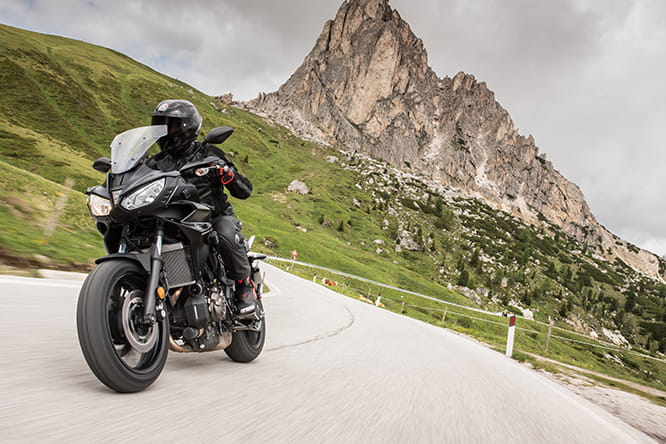 Covering some 150 miles of Northern Italy's finest roads around the Dolomite mountains where the scenery has to among the most spectacular on the planet, the number of miles also coincided with the amount of hairpin bends negotiated; both uphill and down as well as number of irritating cyclists in our path, often two abreast. So the first and perhaps most important note is to praise the cross plane twin-cylinder engine. The character of the motor low in the rev range means even the tightest of bends can be taken in second gear leaving plenty of grunt to pull away. The throttle motion is languid and lazy, ideal for newer or less experienced riders but the way the power feeds in adds to the smoothness of the delivery and drive.

Pulling through the low and mid rev range like a little steam engine, the Yamaha overachieves with the performance from its smooth and Euro 4 compliant motor which at 0.38hp/kg happens to be the best power/weight ratio in its class.

The gears are tall enough to keep this junior sports-tourer powering all the way to the red line at 10,500rpm in second at which time you’ll see 70mph displayed on the rather excellent LCD display. But on the brakes especially preparing for a downhill corner and it must be remembered that it’s a twin not a 4-cylinder bike so be extra careful when dropping a gear and releasing the clutch as the rear end tends to get a little squirrelly as it it goes light and the engine braking makes a point of reminding you the wheel can lock easily.

ABS on the rear interferes too quickly but with the price tag in mind, the twin, 282mm front discs are more than suited to the lightweight Yamaha and its target audience. The bite point is early yet soft enough while gently squeezing, while the adjustable lever gives options depending on the length of reach. Just like the rest of the bike, it’s all about comfort and agility.

The road layout proved an ideal test for the Tracer 700 although the surface adhesion levels proved a test for the riders as the pace increased. Cracks, bumps and crests combined with altitudes around the striking mountain passes ranging from 1,000 to 2,500 metres above sea level that were obviously chosen deliberately to demonstrate the bikes ability. And Yamaha's trump card was the choice of tyres. Michelin Road Pilot 4 have yet to be standard-fit used on Yamaha but they are a classy choice which flatter the relatively budget suspension going together like Scott and Charlene. Not only providing excellent grip but comfort too over the craggy, testing and often slippery road surfaces. 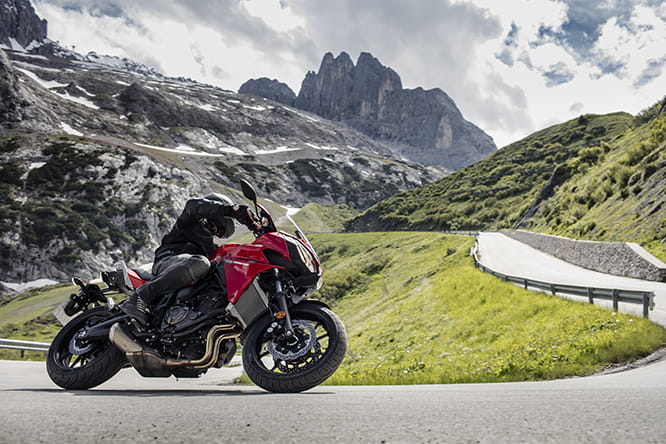 Through the development of the Yamaha, the emphasis has been on keeping the bike as practical and basic as possible, within reason, and this of course is to keep the price tag low and accessible. So, it’s quite refreshing to hop on a bike and not have to worry about which riding mode is most suitable or which traction control setting do I need. Just get on and go!

It might not be the most beautiful bike in the dealership but does have a nice mix of sharp, angular lines, neat air ducts on the side of the fairing, colour coordinated hand guards with in-built indicators and some quality touches like the layout of the pillion grab rails. I’m a big fan of the 3-cylinder 849cc MT-09 Tracer (now called Tracer 900) which starts at £8149 and that too features a low-slung side exhaust and that for me adds a degree of neatness. Both bikes have a lovely character, the 900 triple and the 700 twin both offer a rewarding ride.

Like the bigger Tracer, the steering is direct and sportier than a Versys or V-Strom or larger road-going adventure bikes, hugging tight apexes and rolling nicely around the quicker turns, well balance too. It’s a true rival to the smaller capacity off-roaders like an F800GS, although the Yamaha has no intention of being an off-road machine.

Bike reviews can easily turn into a series of facts and figures and it is easy to forget the emotional journey a rider experiences when on a new bike. On this occasion we were certainly wooed by the incredible scenery which encourage a sense of both freedom and exhilaration, two key feelings we all talk about when asked what riding means to us. Equally, the Tracer 700 is beautifully balanced, comfortable, agile and tourquey bike that may not have the urgency of a larger capacity sports tourer but its price represents both great value as well as a first class experience for either the newer rider or one looking for a more comfortable ride. I really enjoyed riding it but let’s see if I feel the same when I’ve commuted to Bike Social HQ on a cold and rainy October morning.

For all of the intricacies of the Italian roads and their tanned, toned, Lycra-wearing hazards the Tracer 700 was an ideal weapon to conquer them all. The torquey, punchy engine mixes beautifully with an easy-to-ride throttle and clutch do. It’s comfortable, agile, responsive and above all, an absolute steal at £6299. They’re due to be in dealerships by the end of July so go get your name on a test ride list. 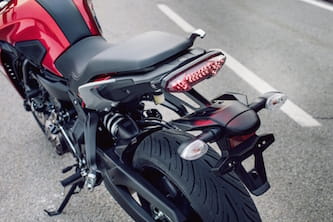 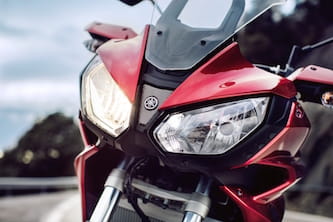 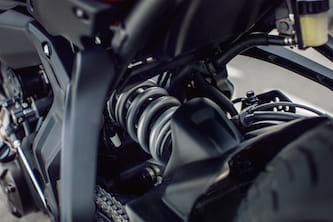 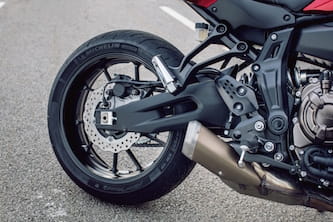 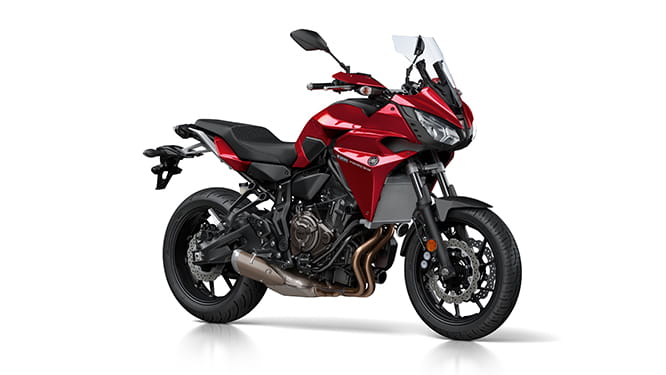 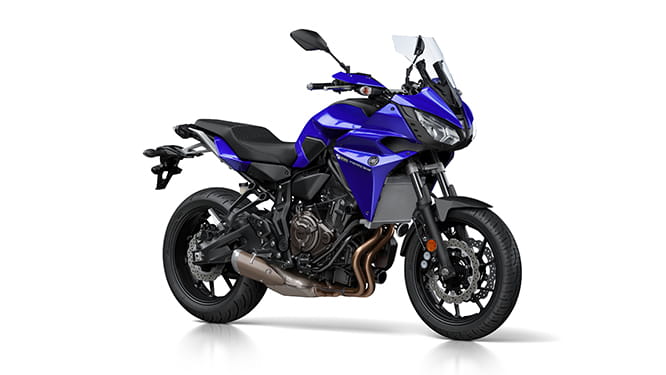 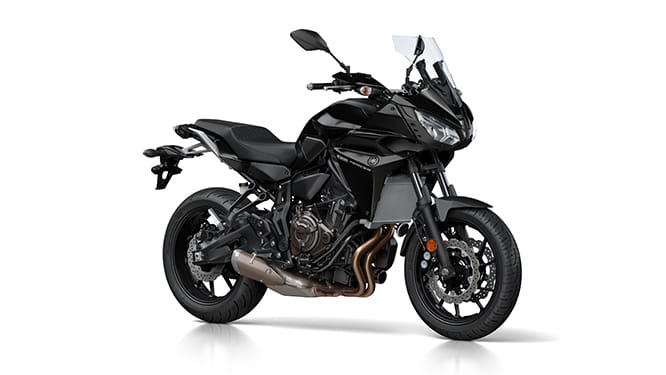