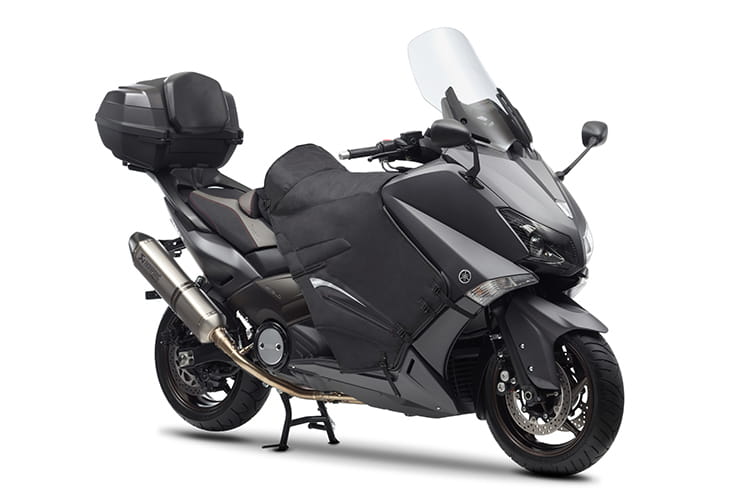 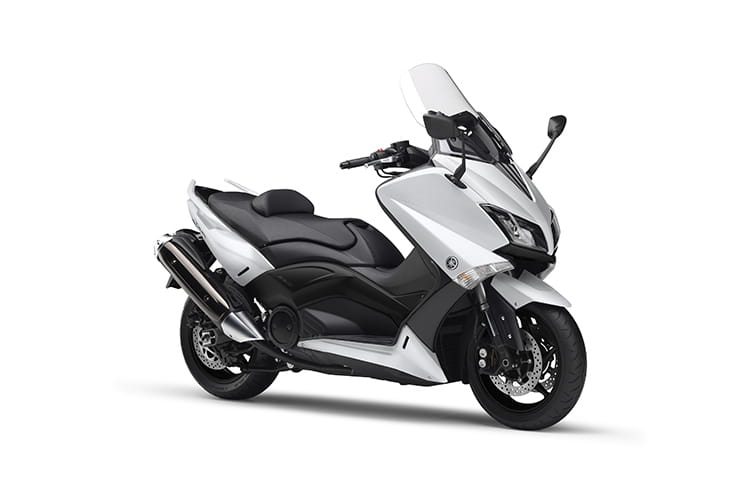 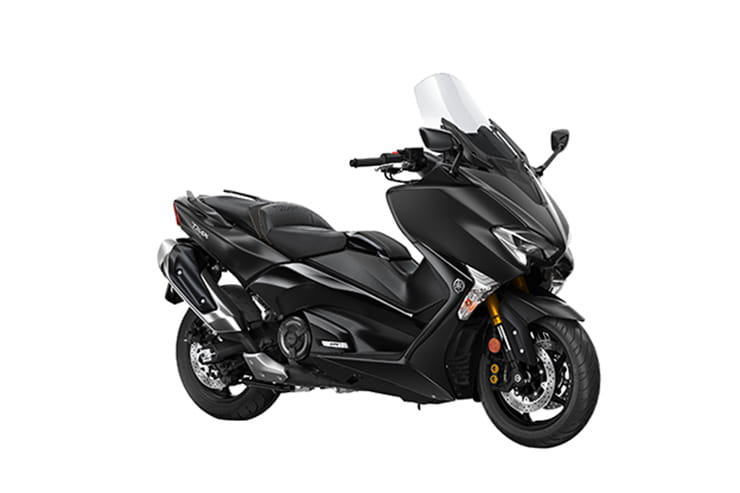 With over a quarter of a million TMAX (or T-Max depending on its vintage) models sold to date, Yamaha’s hugely popular maxi-scooter is rightly regarded as a ground-breaking motorcycle. The world’s first maxi-scooter, this parallel twin-engined twist-and-go has a surprising sporty edge as well as heaps of practicality. While some riders look down their noses at maxi-scooters, the TMAX shouldn’t be ignored as it is one fabulous machine.

While the TMAX is a hugely popular bike in Europe, in the UK it sells in relatively small numbers and that means its tends to hold onto its value. Also you have to remember this is a premium motorcycle and not a budget scooter, which is reflected in its high price tag. An early 2012 TMAX will cost you between £5000 and £6000 from a dealer with the updated 2015-2016 model upping this slightly to between £5500 and £6500. When you come to the 2017 generation the price jumps up as there are two models, the XP (base model) and DX, with the lower-spec XP costing from £7000 to £8500 and the DX’s price tag beginning at £8000 and rising to £9500 for a 2019 model.

The TMAX’s 530cc parallel twin (up 30cc on the older T-Max generation of models) delivers more than enough drive for the maxi-scooter and will happily allow you to cruise at motorway speeds, however it is in town it really excels. Thanks to the ‘twist-and-go’ gearbox the TMAX is a joy in busy city streets, merrily zipping away from lights with enough acceleration to ensure you get the jump on cars (or bicycles!) and a lovely throttle connection. Where the newer 2017-onwards generation gets a ride-by-wire throttle and with it power modes, you won’t miss these somewhat pointless additions on the older generation and the same goes for traction control for 99% of the time as the TMAX’s power delivery isn’t aggressive enough to break the rear’s grip and it is only on unpredictable surfaces it is a helpful safety net. Out of town the TMAX doesn’t feel underpowered and although a pillion does make it struggle a bit on acceleration, once up to speed it is fine for a spot of two-up light touring and day trips away.

The TMAX’s CVT (twist-and-go) drive train was updated for 2012 and with lighter components helping to reduce engine power losses, it feels noticeably sprightlier than before, a fact helped by the motor’s capacity increase. There has recently been an update issued by Yamaha (not a recall as such) for the CVT system, which is quite handy as that means you should be able to get a new belt fitted! The symptoms are the bike’s drive slipping at high revs but there has been a bit of confusion surrounding it so check with your Yamaha dealer. In terms of maintenance, Yamaha’s recommendation is a bit odd with regards the drive belt as it says ‘check every 6000 miles until 24,000 miles and then every 3000 afterwards’ but doesn’t actually state a mileage when to change it and it is left to its condition/wear/tension, which is inspected at the service. A new belt will cost roughly £250 in labour to fit plus a £100 belt (there are aftermarket items available as well as OE), although if you add in rollers, sliders, oil filter, etc the parts cost can rise to £300 as part of a bigger service. The engine needs servicing every 6000 miles with valve-clearances at 24,000 miles, so take this into account when buying a used bike. The OE exhaust note is, as you would expect on a scooter, somewhat weedy however Yamaha sell an official accessories Akrapovic and there are loads of aftermarket options from European exhaust manufacturers as it is such a popular model on the continent. 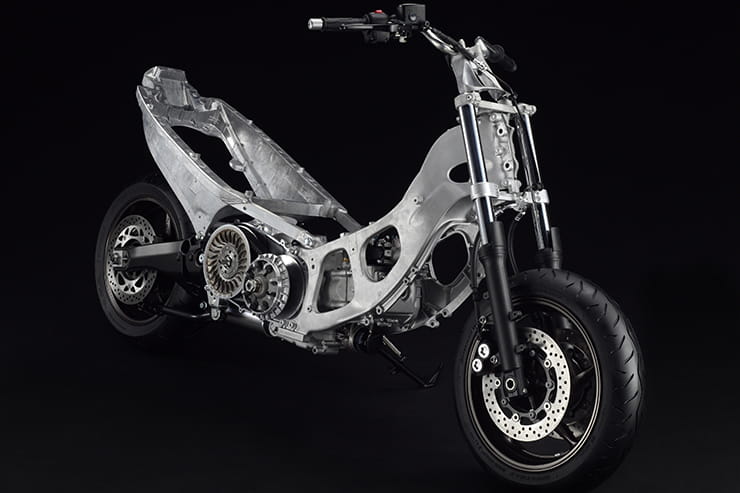 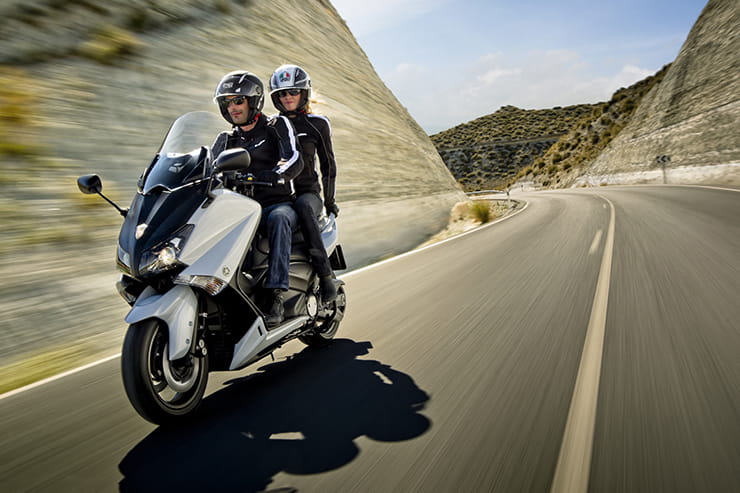 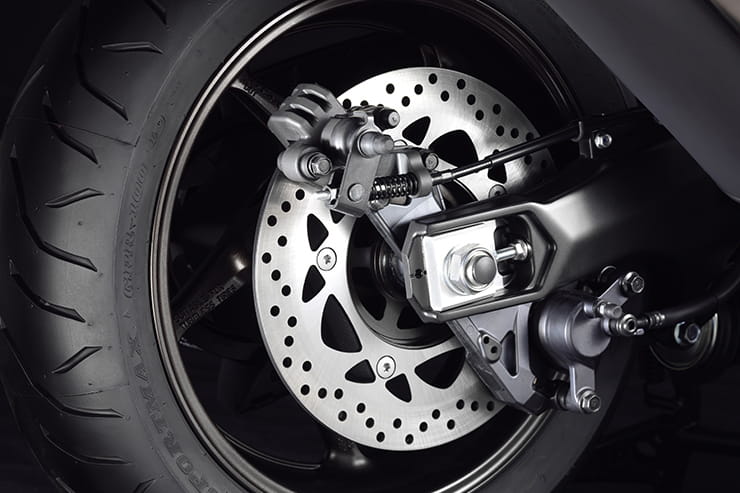 The TMAX is a pleasingly frugal machine and as the CVT doesn’t allow you to really rev the hell out of it you can expect a steady 50mpg to be returned, which is excellent. In city conditions this can even top 60mpg, meaning you can squeeze almost 200 miles from a tank in an urban environment.

As the TMAX is an all-enclosed scooter it does suffer a bit in terms of its weight, however Yamaha have done well to trim it down to a claimed 217kg wet and thanks to a low seat height and excellent balance and weight distribution it doesn’t feel that cumbersome at low speed. However once you get rolling the real surprise hits you as the TMAX is a great handling scooter. While at first the feedback from its small 15-inch wheels is a little disconcerting, when you start to trust them (‘proper’ modern rubber is available in these sizes from all major tyre manufacturers) you can really let loose on a TMAX. Agility has always been core to the TMAX (at some sacrifice in practicality and the size of the underseat storage it has to be said) and on open roads it is a real eye-opener. Thanks to its wide rubber you can blast the TMAX through bends to the point where the centre stand will scrape and although doing this with your feet pointing forwards is a little disconcerting at first, after a while it is brilliant fun. This is no wobbly scooter, it is a properly good handling motorcycle. The updated 2015-onwards generation gets inverted forks, which look good but don’t really make a huge difference to the ride quality, however the 2017-onwards bikes have a new chassis, which is 9kg lighter and does add a touch more agility at speed.

Armed with the same ‘silver spot’ monobloc (technically…) caliper as some R1 models, the TMAX isn’t exactly lacking in stopping power and in some ways the earlier bikes are actually a touch over-braked as it is quite easy to lock the wheel, especially in the wet. The addition of radial brakes on the 2015 models doesn’t change this and it is only when ABS arrived in 2017 that you can hammer the front in safety. Why it took Yamaha so long to arm the TMAX with ABS is a bit of a mystery. When buying used, double check the rear parking brake isn’t seized on its slider due to a lack of use and also the rear brake isn’t sticking as they can suffer a bit from corrosion due to their low-slung position. 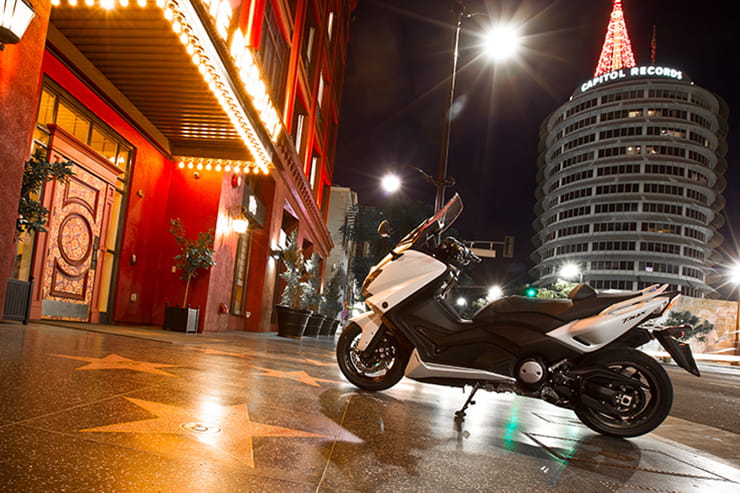 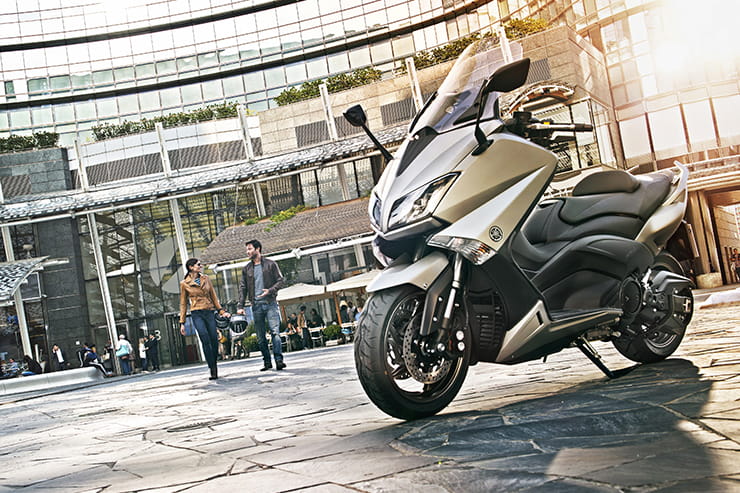 Touring on a scooter? Well you can on a TMAX and many Europeans do! Yamaha sold a ‘touring pack’ for the TMAX that consisted of a top box, heated grips and a taller screen and if you add in the scooter apron (they look terrible but are very effective) the TMAX can certainly be used to cover distances. The underseat storage is a touch limited, which is a shame, but that is down to its sporting focus and avoids the bike having a huge backside like Suzuki’s Burgman. If you opt for the top-spec 2017-onwards DX model you get cruise control, keyless ignition and even an electrically operated screen. So yes, small distance weekend touring is an option but really this is a city slicker/commuter and not ideally suited for two-up weeks away.

Early bikes are lacking electronic assists and the TMAX only gained ABS and traction control in the 2017 update, which is a shame. Cruise control is only on the DX as well as an electronically-adjustable screen and drive modes however heated grips are optional extras on all generations and several models have a keyless ignition. In 2017 My TMAX Connect also arrived, which is a tracking system ran in association with Vodafone. In terms of accessories there are loads out there with top boxes, aprons, replacement seats, aftermarket exhausts and taller/lower screens easily sourced. The TMAX is a very poplar machine so you won’t be left wanting.

There is always the tendency by motorcyclists to ignore scooters and dismiss them as ‘not proper motorcycles,’ however the TMAX shouldn’t be ignored. This fabulously practical bike makes for a great commuter that is also a brilliant, and easy-going, runabout. The price tag is very high, which does means it is an expensive ‘second bike,’ but once tried the Yamaha’s excellent handling and fun factor makes it a surprisingly enjoyable ride that may well convert you to a lover of the maxi-scooter. Honestly, it could. 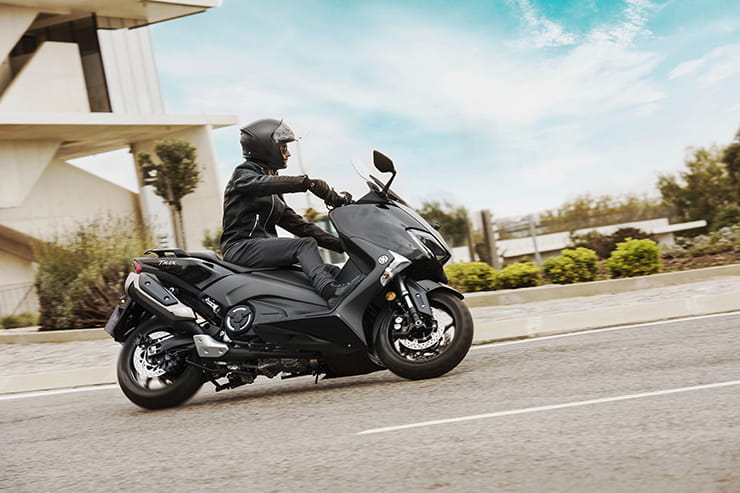 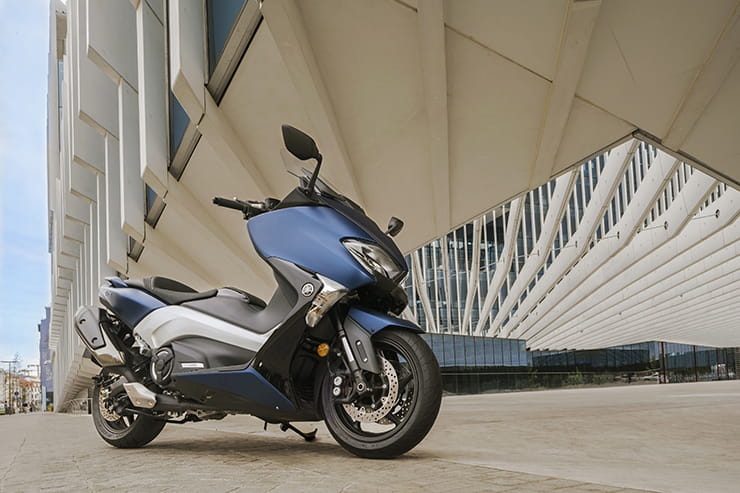 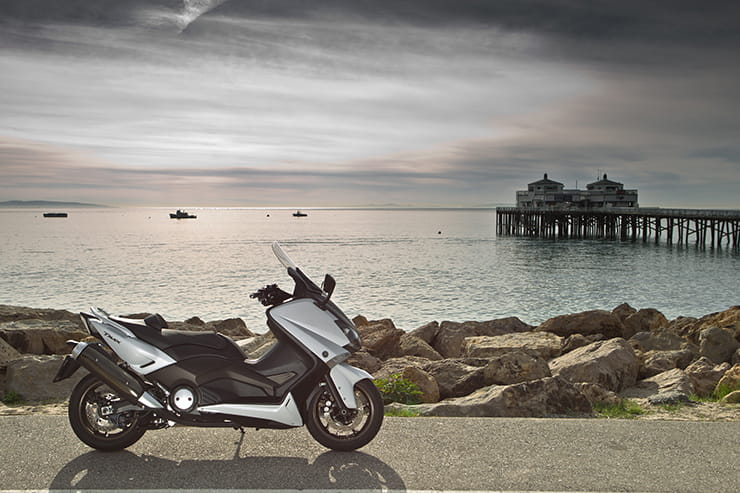