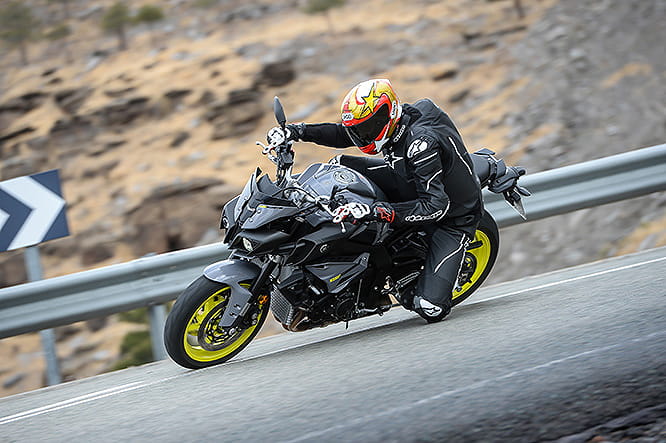 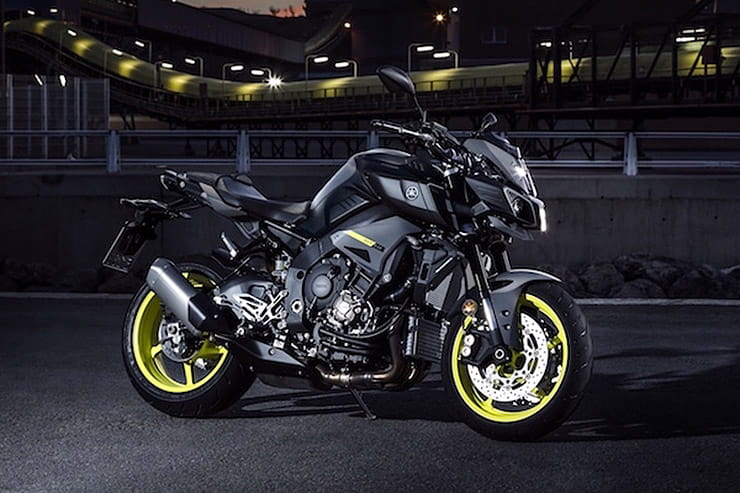 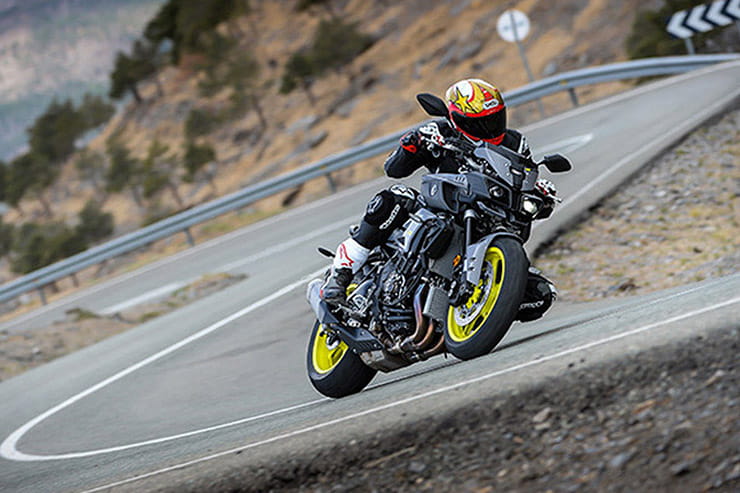 When Rossi and Lorenzo rode on to the stage at the Yamaha press launch in Milan in 2015 to talk about the MT-10 we knew Yamaha had built something special.

Yamaha has sold some 65,000 MT-series bikes in Europe up to 2016 since the MT-09 was first launched three years ago, so it’s no wonder why the big one has arrived. For anyone who owns an MT-09 on PCP three years is about the right time to be trading up to a bigger bike. Yamaha claim some 90 per cent of MT-owners would buy another MT-series bike, and it’s easy to see why.

The MT-10 is essentially a naked R1 with some big fat wide bars, and after some 220 miles on the bike in a day, I’m blown away by that motor, its incredible punch, and the way it’s so easy to ride fast. It’s naughty in every way, yet with features like an inbuilt power socket hidden in the dash it’s as practical as a Fazer or modern adventure bike, too.

All Yamaha’s MT-series bikes offer modern technology at an affordable price and the MT-10 is no different, except that it’s bigger, faster, more aggressive and cooler in every way, the flagship if you like.

Look at the specs and you can see that it’s aimed clearly straight at the BMW S1000R. Weighing in at 207kg and making a claimed 160bhp, at £10,350 the BMW costs some £351 more than the £9999 MT-10 at 2016 prices, but is a claimed 3kg lighter fully-fuelled, even though the German bike has a 0.5 litre bigger tank. They are incredibly similar in terms of specs. It’s clear what Yamaha were setting their sights on. 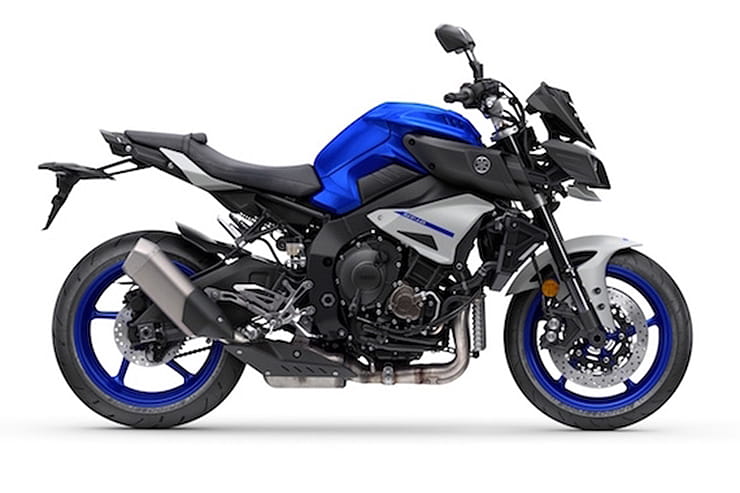 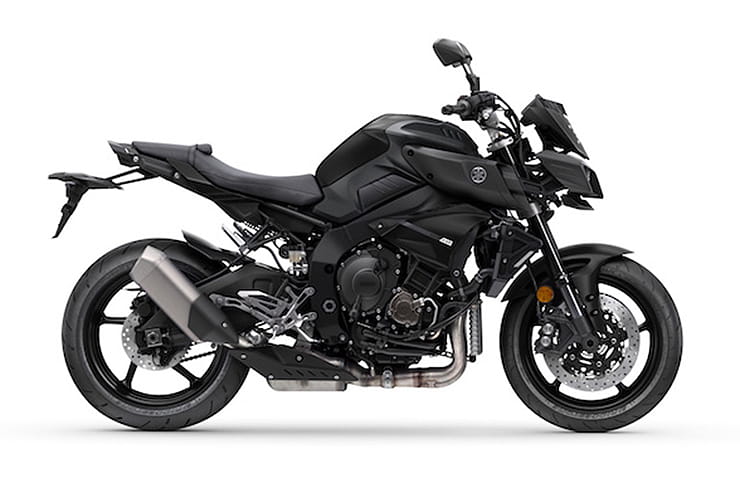 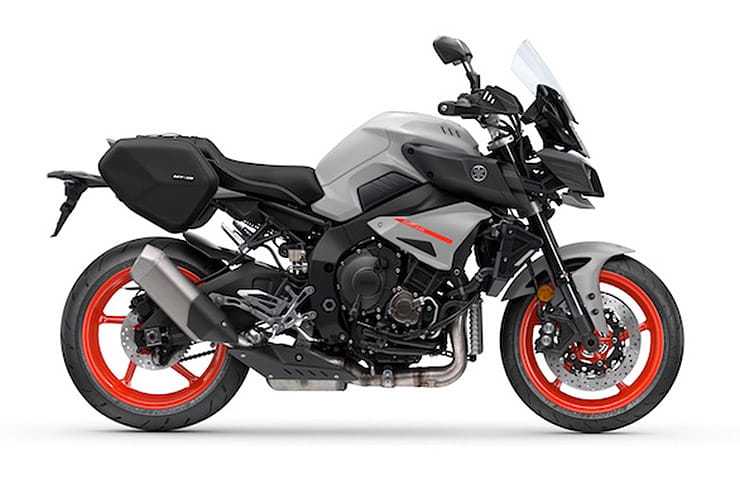 Using a version of the brilliant Yamaha CP4 crossplane crank engine, the retuned motor makes a claimed 158.3bhp, compared to the R1’s claimed power of 197.2bhp. Somewhere in my heart I wanted 180bhp, but that’s just greedy. Within minutes I knew how much of a fool I’d been and didn’t have to wonder about the power for long. And plenty of other manufacturers' bikes (like some that may be orange) claim 180bhp when actually they're more like 160-ish bhp.

As ten bikes left the launch base and accelerated on to the first dual carriageway, every bike in line got into the midrange power of the MT-10 and wheelied down the straight – such is the force of the mid-range torque.

Yamaha claims 81.86ft-lb, the BMW 82.6ft-lb. Either way, it’s a very close affair and on a drag strip there would be not much in it. The MT-10 may just edge ahead on it midrange though but without lining them up next to each other it’s hard to say.

Yamaha claim the motor is 40% different to the R1. It’s a powerhouse of an engine that may be monstrously powerful and will lift the front wheel in fourth gear. But at lower speeds it’s a big friendly bike, too.

There are three power modes – A, B and 'Std' mode. B is the raciest setting and sharpens up the throttle response. A is the middle setting, but most of the time for most people the 'Std' setting works perfectly. There’s gentle throttle response at low revs which makes it as easy to ride around town as any of the Yamaha MT-series which currently includes the MT-125, MT-03, MT-07 and MT-09.

There’s a slipper clutch, too, which means you can bang in the gears on the way down and the rear doesn’t hop or bounce on the way into corners, it’s a good set-up and just lets you be even more naughty with the way the MT-10 makes you behave. The gearbox is peachy slick by the way. 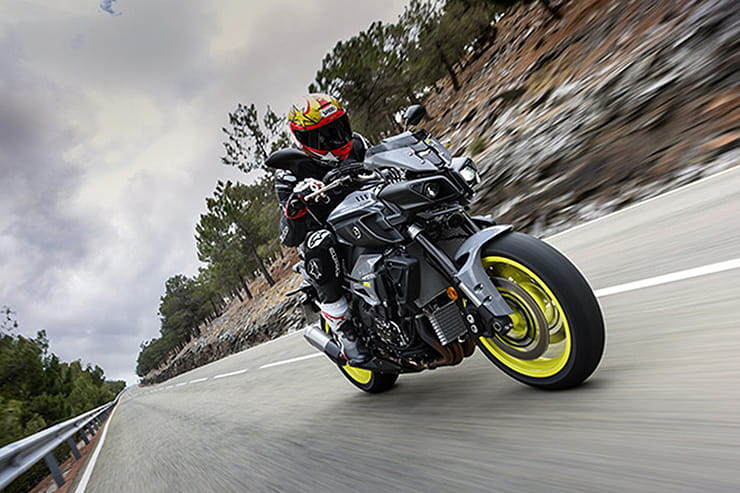 We filled the bikes up at 150km twice, or 93 miles in old money. By that point the fuel light started flashing. Though to be fair there was around 30-miles of fuel left at least once the light flashed, and it spent most of the day being ridden incredibly hard. A more realistic ride should be good for 170-miles I’m estimating.

The chassis itself is 60% the same as an R1 but the stiffness is different to suit the bike’s all-round nature. There’s a steel sub-frame on the MT-10, too, while the geometry is changed to make it stable at speed in its unfaired guise. At the back is a long aluminium swingarm that’s long for drive out of corners and stability, combined with great handling.

The chassis is so good that I never scraped a footrest all day and we were riding them about as hard as you’d want too. When you get a move on, suspension is set-up on the softer side but I enjoyed the plushness of it and the feeling it gave from the Bridgestone S20 tyres. It’s not as firm or as sporty as something like an Aprilia Tuono V4, but it isn’t meant to be, hence the all-round tyre rather than an all-out track day tyre. Saying that, the bike was on standard suspension settings and has fully-adjustable suspension so if you wanted it firmer it’s all on offer and it wouldn’t be out of the question to stiffen it up and do some sports bike damage on a track day.

The Bridgestones don’t give loads of feel but on a day’s riding with temperature ranging from 6 degrees in the mountains to 28 degrees in the desert they were good, but not memorable. 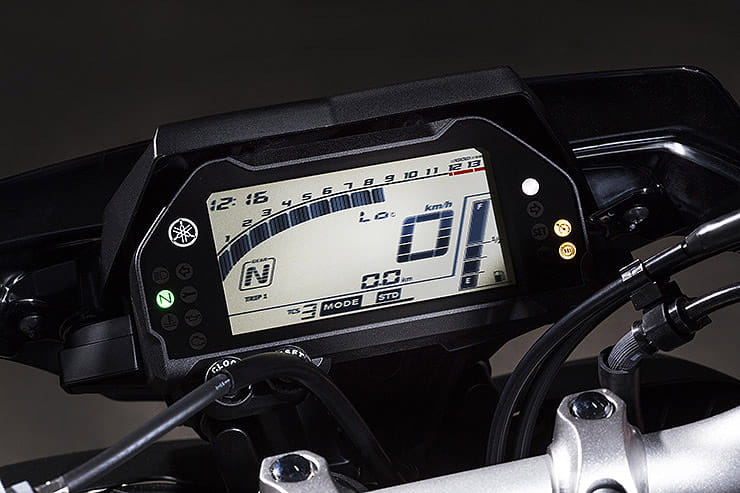 The R1-derived brake calipers are good, not amazing, but I never wanted for much more. I guess sometimes we’re ruined by the R1’s sublime brakes, but in this guise they gave good feel on the limit. The ABS lets you push them hard under braking and they heated up quickly and the ABS only cut-in if I forced it too by being a buffoon on the lever.

The new frame means a new riding position over the R1, too. Sportier than an MT-09, but not anywhere near radical like the R1, the riding position is comfortable with plenty of leg room (I’m six-foot four). It has high and wide bars and a slightly forward canted riding position. You feel like you’re sat in the breeze but it works well at speed, and there’s plenty of bike still in front of you with those lights and that big LED display. There’s a cowl, too, which keeps the wind off up to about 100mph when your helmet starts getting buffeted. For a bike that’s meant to be naked, that’s pretty impressive. The pillion perch is on the smaller side, but sadly didn’t get chance to try it. It even has cruise control! Whack on an optional screen, fit the comfort seat which is way more comfy than the slightly hard standard seat, and you have one of the best sports tourers on the market.

The verdict may be out on the MT-10’s looks but I absolutely love the way it takes bike styling on to a new generation. It’s edgy, cool and right on point for 2016. Take a look at mountain bikes and that fluro and grey colour scheme and it’s clearly ‘on-trend’. In the same way the 2015 R1 changed the way 1000cc sports bike look when it was launched, the MT-10 is set to challenge that same perception.

The bug-eyed look includes two LED spotlights, one for low beam and one for full. While the clocks include everything you ever could want from a bike, fuel range, a clock, trip meter, temp gauge, outside temperature, riding modes, traction control-settings and even an eco mode which shows when you’re riding in an eco friendly way.

Like the R1, the set-up is easy to use from toggle switches on the left handlebar traction control and riding modes can be adjusted on the move as long as the throttle is closed. 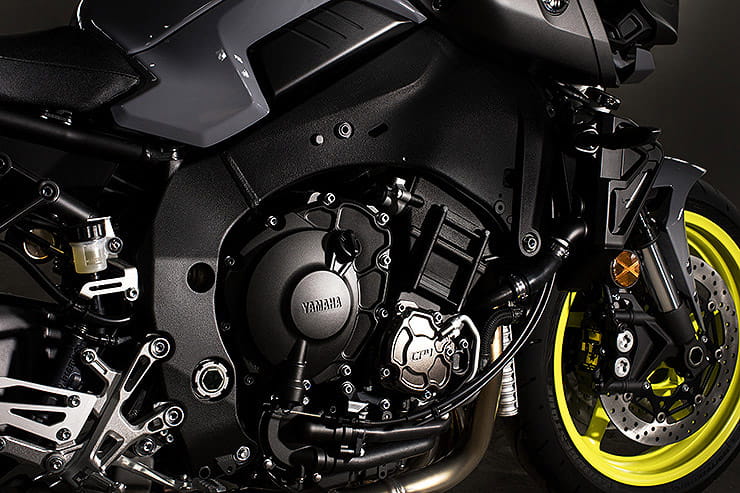 Some people may be mourning the loss of the Yamaha FZ-series, but one ride of the MT-10 and you’ll think otherwise. Besides, I never got on with the FZ-1. The Fazer 1000 was a bike I loved but it all went wrong with the FZ-1, in my opinion. But that’s all fine because the MT-10 is an incredible bike, and way more than ‘just’ a stripped-back R1. It does everything the FZ-series bikes did, and way, way more.

We did 220 miles in one day on all kinds of roads and the MT-10 made me smile every time I hit the starter button. It’s that growl from the crossplane crank that makes it addictive, the way the torque is delivered, and the way the handling and the electronics makes everything so easy. It’s a bike for all reasons and as good as any S1000XR or Multistrada if you want to do a bit of European riding, for the rider at least.

Three things we love about the MT-10…