Yamaha’s dynamic-handling, naked super-weapon has broadened its smug grin even further for 2016 as the all-conquering MT-09 gets a handful of tweaks for the new season. A couple of new colours, including the Night Fluo look which is bound to divide opinion, plus the three-stage traction control as seen on the recently released XSR900 and a little update to the engine mapping.

At £7349, the new MT-09 is surely one of the best value motorcycle on the market today. It won’t be in UK dealerships until the middle of March but Bike Social’s Michael Mann has been out on the Spanish roads near Benidorm at the world press launch to see if the upgrade(s) have improved the already incredible machine.

The 847cc triple was introduced in September 2013 as the first model in Yamaha’s MT range and it took the motorcycling world by storm despite a fuelling issue resulting in its throttle response feeling a little snatchy. 20,000 sales over the last couple of years certainly represents that the naked supermoto-style MT-09 has become a firm favourite. Its power, torque, agility, not to mention highly attractive price point have created a winning combination. 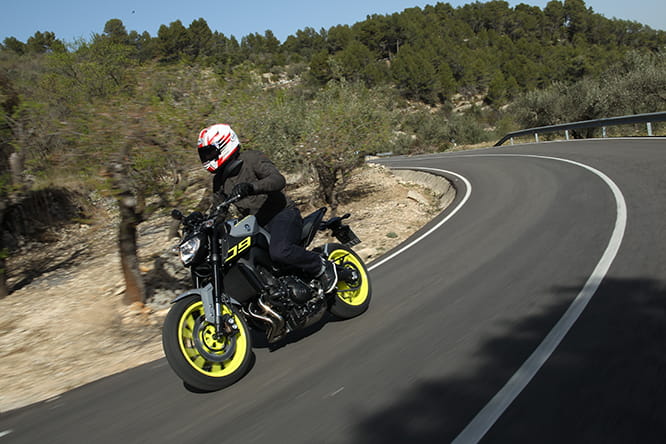 So, what’s new? Not a lot really. There’s a couple of tweaks and some new colours though the MT-09 is not Euro 4 compliant, unlike the Sport Heritage version, XSR900, which, due to its revised geometry (i.e. seat height) means it is a new model instead of an update or revision to an existing version.

The engine mapping has been refined to iron out any over-the-top agression with Yamaha’s D-Mode (Riding Modes) and its model-specific settings. Standard mode is still surrounded by B and A. Standard and A modes deliver the full 113.5bhp while B is about 3bhp down because the engine doesn’t use the full rev range in this mode. The differences noticeable while riding relate to the way in which those horses are delivered, with A once again being sharper to respond and super sensitive to the slightest movement on and off the gas. Give it a fist full and the front wheel is guaranteed to loose contact with the tarmac but the all-new traction control will preserve the rubber on the rear…as well as you pride. Modes can be switched on the fly using the rather obvious button on the right-side of the handlebar and ensuring the throttle is closed momentarily. B Mode is no wimpy option though, there’s still plenty of torque and power here handy for road surfaces with less grip or when the tyres are cold. Take my advice and leave it it Standard mode to begin with if you’re less experienced or wish to keep your licence.

One of the keys to the MT-09’s success and ability is the power-to-weight ratio and bucket load of torque all packed into a terrific chassis. A relatively short wheelbase and upright riding position with emphasis on weight forward, supermoto-style, are rewarding when hustling around the faster turns. High, wide handlebars invite counter steering which gets the front end turned quicker and earlier. The 09 grips well thanks to its sporty Bridgestone Battlax S20 tyres and well balanced chassis. Some of the dustier mountain roads resulted in, or even encouraged, ‘traction issues’ when rolling on the throttle out of a tighter corner, interesting for the more adrenaline focussed rider but also a quick reminder of the bike’s torque. Nevertheless, the all-new traction control keeps everything under control. 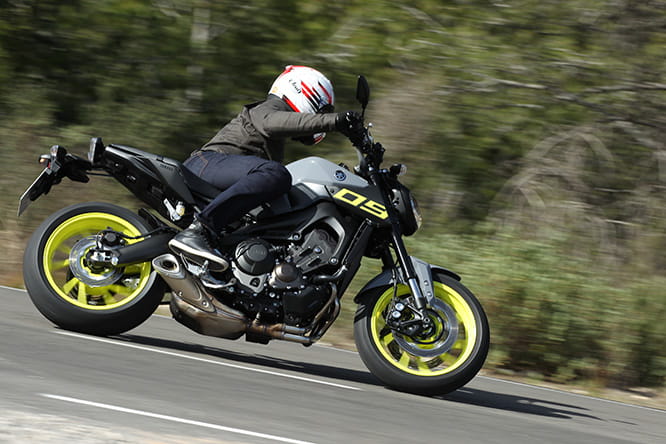 The 3-stage traction control is the main new feature for the 2016 model. Operated via a vertical spring-switch on the left-side handlebar the system can be flicked between stage 1 for minimal intervention and 2 for maximum. To turn TC off requires the bike to be stationary. The quirkily-shaped yet fully digital instrument panel displays this information right in the centre of the screen adjacent to the riding mode. The position of the display hasn’t changed and nor has the riding position so one observation from the original MT-09 was that when in a slightly more forward riding position, the display is a little tricky to read as it’s not as naturally in your eye-line as you’d expect. Not a deal-breaker but worth noting.

Stability under braking was never the original MT-09’s strongest point with the dip of the front forks verses the power of the engine acting like a see-saw effect but with the both front and rear adjustable suspension (front forks and rear monoshock both for rebound and preload) stiffened up from its standard settings meant the bike coped really well with the smoother flowing turns. If this is your style of riding then I would recommend making the bike stiffer. It’s almost as agile as a superbike in the corners and at 191kg wet it would prove stiff competition if up against any sub-1,000cc sports bike either off-the-line or over the 60 miles of Spanish roads we faced today.

The three-cylinder 847cc motor is packed full of character, it’s lively, desperate for revs and ready to leap into action, pulling at the leash. Overtaking is a doddle in any gear and even in top pulling 3000rpm it will get the job done, though really you ought to knock it down a couple of gears to hear the triple-cylinder sing its aggressive song from the low-slung exhaust. It’ll pull and pull all the way to 11,300rpm redline, making its maximum torque at 8,500rpm but spreading it well across the range. Maximum bhp meanwhile is at 10,000rpm. All-in-all the Yamaha responds so well to an aggressive or should we say enthusiastic riding style. It’s certainly an attention grabber and one of the two new colours will ad to that; Night Fluo it’s called which is available on several of the other MT models. The light matt grey with fluorescent detailing will divide opinion like Marmite I suspect. Yet, because the MT-09 is an extrovert the Lava Red option borrowed form the Tracer looks great but is perhaps a little grown-up for the ostentatious street bike! 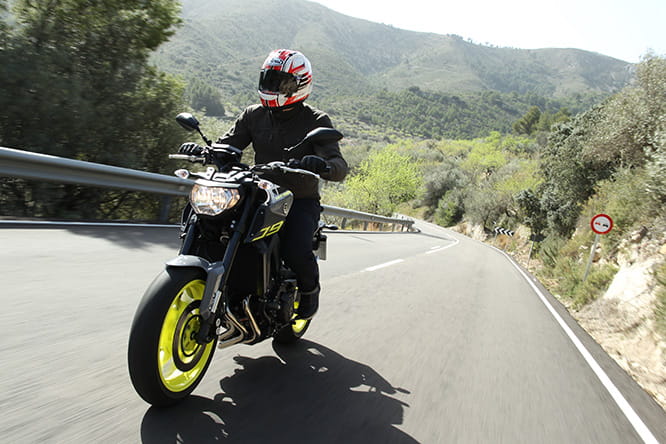 The 298mm dual disc front brake is naturally ABS-assisted such are the rules these days and they are more than capable at scrubbing off the speed effectively and stably though the engine braking characteristics of the tripe are also effective.

Press launches aren’t usually true representations of real-world riding particularly when it comes to fuel economy figures. Having re-set the instrument panel on leaving the hotel, by the end of the ride it read 6.7 litres/100km which is the equivalent of 42 mpg. Not too shabby for a bike with such performance and that all important fun-factor. 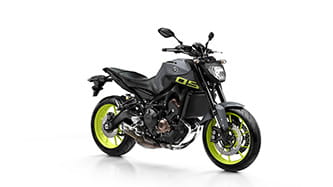 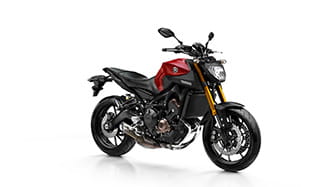 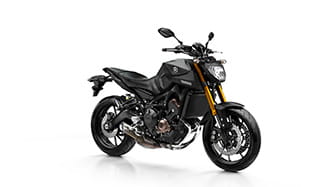 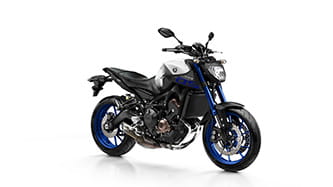 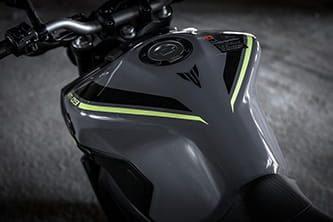 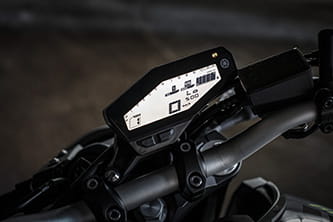 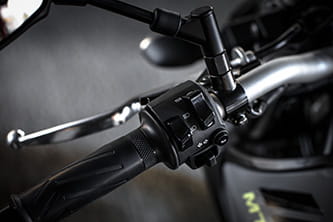 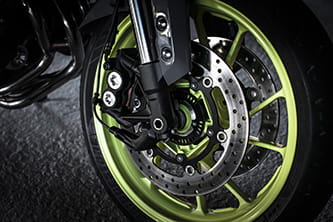