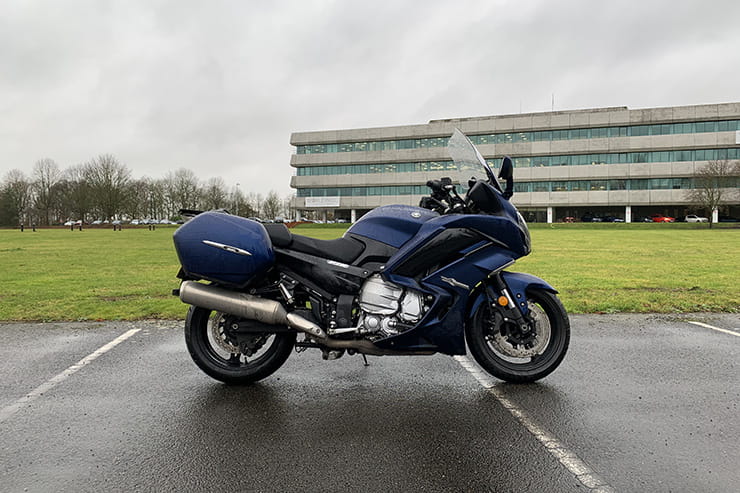 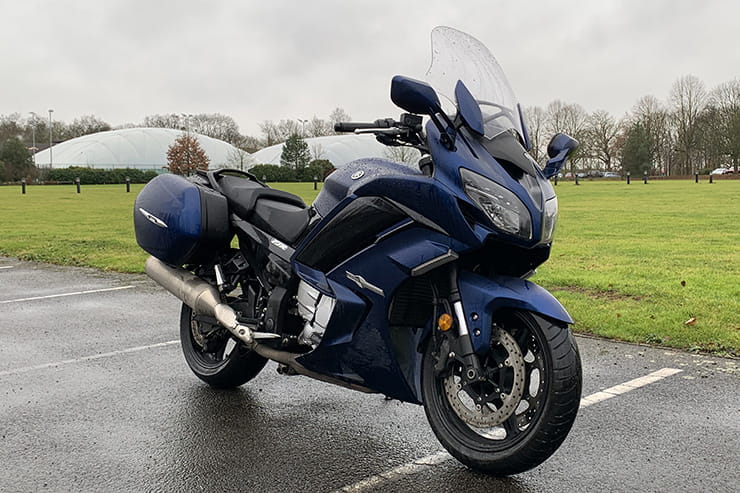 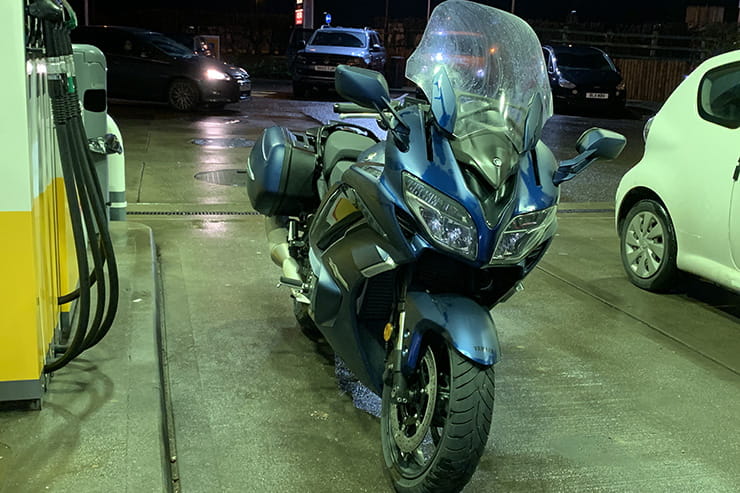 If success is measured by longevity, then Yamaha’s FJR1300 should be the greatest touring motorcycle ever. The current model might have evolved through different suspension, improved brakes, electronics, detailing and the addition of an extra gear, but the basic engine, chassis and riding dynamics are pretty much the same as when it first appeared back in 2001.

To put that in context, in the time the FJR has been around BMW has launched the R1150RT, three versions of the R1200RT, the R1250RT, K1200GT, K1300GT and K1600GT tourers, Honda launched and dropped the ST1300 Pan European, and two models of Gold Wing and Harley Davidson has had at least three different versions of its classic touring range.

List price is £17,099, which is more expensive than BMW’s state-of-the-art R1250RT in middle-of-the-range (but much better equipped than the FJR) SE spec. BMW aside, there’s not a lot of obvious competition in the new bike market, but the last-generation R1200RT, Kawasaki’s GTR1400 (dropped from the range in 2017) and Honda’s ST1300 are very tempting as secondhand buys. As is a used FJR1300 of which there are many at prices from £3k upwards.

Touring bikes tend to be adventure bikes these days unless you step up to the mega-tourers like Honda’s Gold Wing or Harley’s Ultra-Classic. 2020 will be the last year of FJR production and there are already some very good deals on unsold brand new FJRs going back a few years. The current model with the six-speed gearbox, electronically adjusted suspension and cornering-lights arrived in 2016 and this is the one to go for. If your dealer has one in stock, then chances are he’ll be keen to do a deal 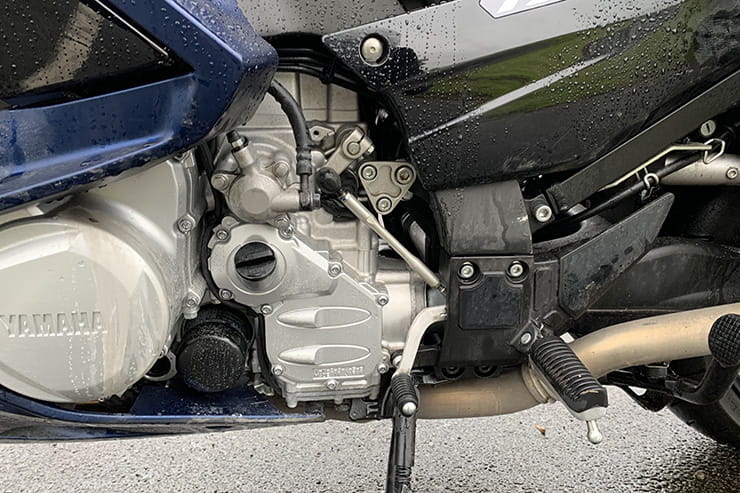 Essentially the same engine we first saw 19 years ago, but now much cleaner and more economical too

144bhp was a lot of BHP for a touring bike back in 2001 and it’s still a lot in 2019. In the intervening years two sets of restrictive emissions regulations have challenged Yamaha’s engineers, but the power figure remains the same – don’t underestimate how much work that will have taken. What’s much more important though is the spread of power and how it is delivered. With 102lb-ft of torque delivered at 6500rpm the FJR is an easy and relaxed bike to go very quickly on and the fuelling and power delivery is cleaner and sharper on the latest bike than on those early less-restricted versions. It’s also a heavy bike for something billed as a sports tourer and moving away from a standstill needs a considered approach – don’t be shy with the throttle and take some time getting used to the clutch action.

Water-cooled, fuel-injected inline four cylinder, with a six-speed (since 2016) gearbox. Yamaha made a lot of the thinking and learning from the (then recently launched) YZF-R1 at the FJR’s 2001 launch. The motor uses four valves per cylinder (most big Yamahas used five back then), is very compact for its capacity and has the gearbox stacked high (like the R1) to keep things even more compact.

By modern standards it’s lacking technology. No variable valve-timing or quickshifter and the fuel-injection/electronics are simple. But it’s a lovely engine to use. The clutch action is assisted for lightness and also has a slipper-clutch function to prevent the rear wheel locking when you change down at high engine-speeds. Power is smoothly delivered and the gearchange is slick. Occasionally, when your head’s in touring mode, processing traffic at 50mph-ish in fifth you might be disappointed in how long it takes the bike to pick up speed, but there’s a lot of weight to get moving and in third or fourth it flies. 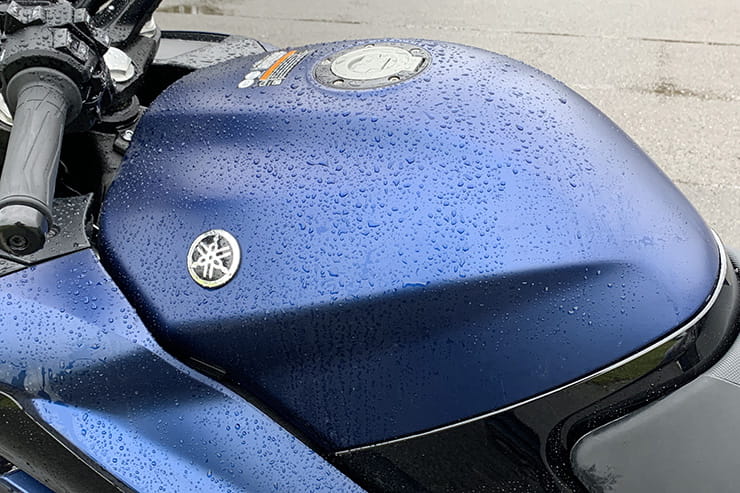 Our average figure during the test was 51mpg, which gives a theoretical 300 miles from the 25 litre tank. Winning the race to the end of the motorway without tripping the speed cameras involves speeding up between the smart cameras and then slowing down dramatically (or is it just me?) and 55mpg. Riding like a grown-up can add another 3mpg and head-down on the back roads it can drop into the high 30s, but if that happens regularly, you should have bought the KTM.

BMW’s R1250RT is ten per cent better in any circumstance and feels sportier, more responsive and sprightly on the road. With the same size tank it will also go 30-50 miles further on a tank 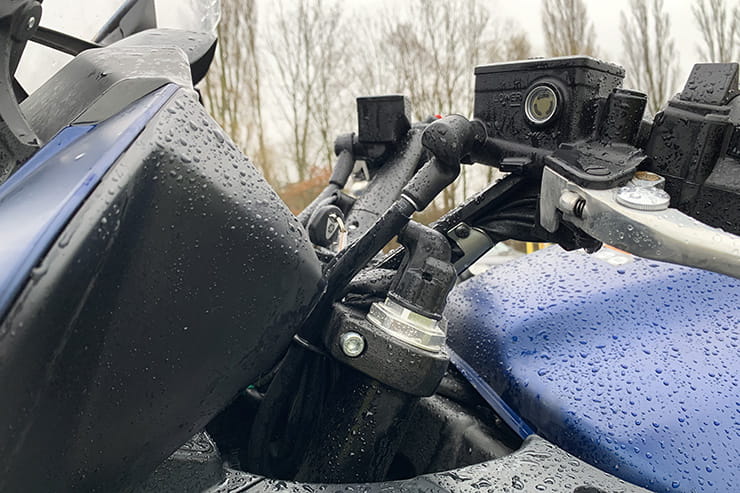 Like the engine, the current FJR has essentially the same alloy frame it started life with back in 2001. But this bike steers better, is more stable at high speed and offers more rider (and pillion) comfort because in the last 18 years the suspension has been developed and become easier to set-up and sports touring tyres have improved beyond recognition.

In most circumstances the FJR handles well and always feels like it has something in reserve. It steers easily, holds a line well and doesn’t start wallowing halfway through a turn like some softly-sprung tourers do.

The suspension adjusts electronically via the rocker switch on the LHS switchgear. You can adjust the damping through soft, normal or hard on the move, but preload has to be set with the bike stationary. It’s not a semi-active system like BMW, KTM or Ducati use. Once set, the damping level and spring rates are fixed.

Even at very low speeds, filtering through gaps that look too teeny for a 290kg tourer, the smooth power and stable chassis give a lot of confidence. Some owners talk about it feeling top-heavy at low speeds with a full fuel tank. I didn’t notice it any more than on similar bikes.

Pushing it around with the engine off is as challenging as you’d expect for a bike weighing 292kg. The distance from handlebars to passenger grab-handle feels long, so pushing it backwards needs time to get the knack. 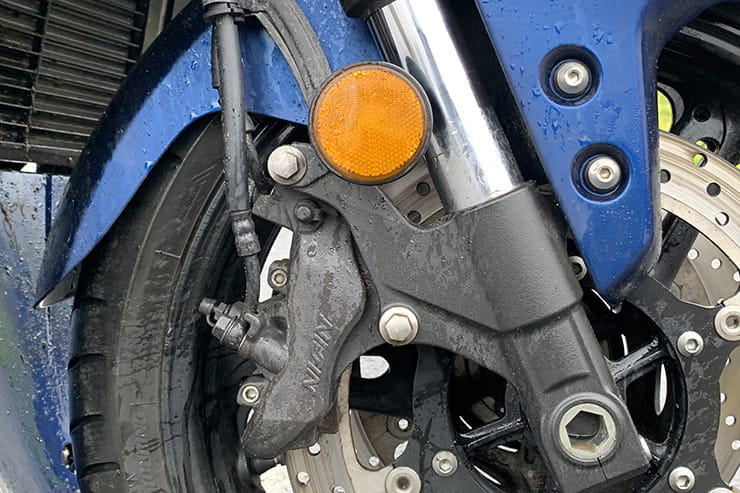 Heavy touring bikes running soft suspension can be tricky to stop quickly and safely. The Yamaha has a good balance of power and feel plus ABS too

The riding position is slightly more sporty than some tourers. Leaning the rider forward takes some weight off your lower back without taxing your shoulders. The seat has two height settings. Even as a six-footer I kept it in the lower position because I’d rather have slightly cramped legs than be nervous at slippery, wet winter junctions in a 50mph gale on a bike with an enormous screen.

The downside of this is with bent knees and slightly less weight on my feet the seat became uncomfortable after about 90 minutes and, in full winter kit with double-layer thermals my knees were aching after three hours.

The electrically-adjustable screen is very effective without disturbing your line of vision and the factory-fit heated grips are superb – properly warm when you need them to be, gentle heat when your fingers just need a cuddle.

On a bike where the ergonomics are very carefully considered, it was frustrating to find the sidestand was difficult to reach in chunky touring boots. The tang on the stand is a little too close behind the rider’s footpeg, making it hard to locate. 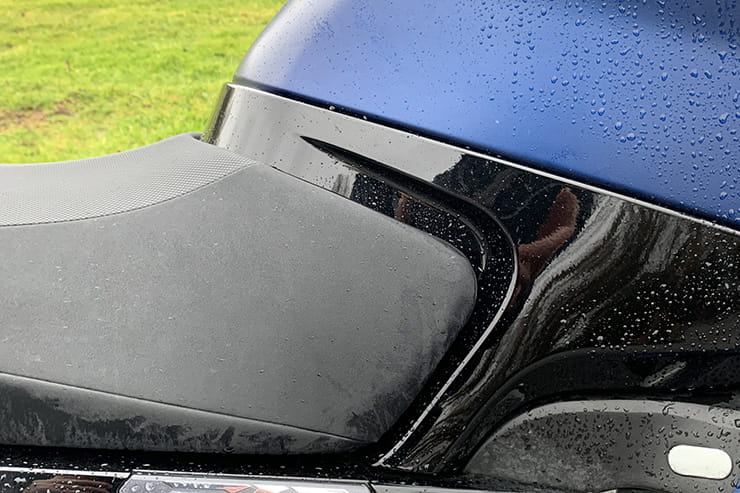 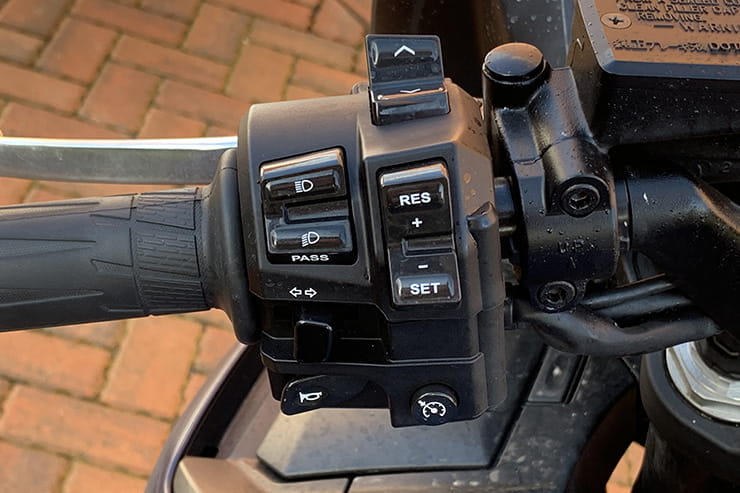 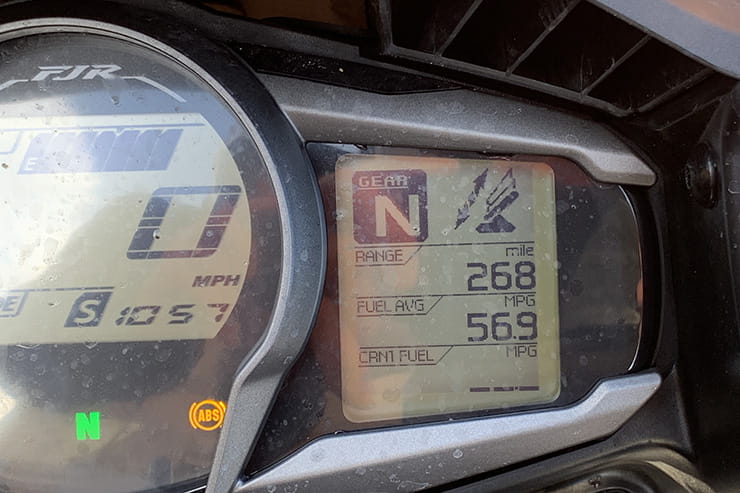 Seat height is adjustable (two settings). The left switchgear controls all the functions via a toggle and a rocker. Displays in the rhs instrument display show the settings

ABS and a simple traction control system are present but unobtrusive. There are two riding modes; Tour, which numbs the throttle response slightly and Sport, which sharpens it up. By modern standards the electronics are very simple and lack the ability to personalise your settings. For some people that’ll be a problem (at this price), for others it’s a blessing.

Cruise control and twin 30-litre panniers are standard and one key fits all locks on the bike. Also new in 2016 were the adaptive riding lights which illuminate as you lean the bike to light up the parts of the corner other bulbs cannot reach. It’s hard to say how effective they are from a rider’s point of view – the earlier FJRs always had a very good spread of light. All I can say is that the FJR’s illumination on unlit, twisty roads is superb and very confidence-inspiring.

Like the electronics the three-part instruments and simple switchgear now look very dated next to the latest TFT screens. Everything works fine and the displays are clear and easily read, but you can only have the information displayed in the way Yamaha have designed it, so if you want to see outside temperature, trip mileage and fuel range remaining…tough, you bought the wrong bike.

If someone gave you an FJR1300 and left you to get to know it for a month, I guarantee pretty-much every rider would come away impressed with the engine, the chassis, the comfort and the ease of getting anywhere on pretty much any kind of road. This bike does touring in a lovely, unfussy, capable way.

The engine is flexible, powerful, reasonably economical and has proved very, very reliable since we first saw it 18 years ago. The chassis can do stable, heavily-laden touring or look-at-me scratching through the lanes and it has all the basic kit (shaft-drive, luggage, cruise-control, heated-grips and adjustable screen) that a tourer needs.

It's only when you hear the price that things get tricky. Even if you don’t want the ‘full-Amstrad’ electronic experience of BMW’s R1250RT, you’ll certainly prefer the way its engine delivers almost-as-much power, sips less fuel, carries less 20kg weight and handles even better for less money than an FJR.

The saving grace is that you can get some seriously big discounts on pre-registered FJR1300s right now and, for the right money it really is one hell of a bike 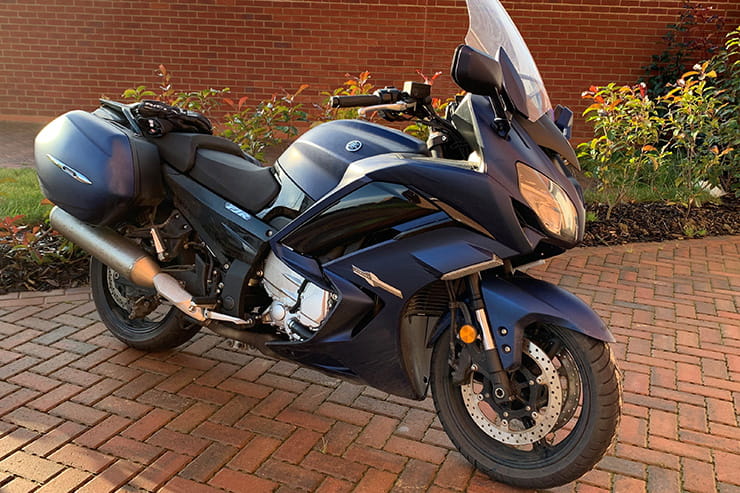 Less weight than a Gold Wing or a big Harley, but pricey next to BMW’s R1250RT

• Versatile for a tourer

• All the kit I need for touring