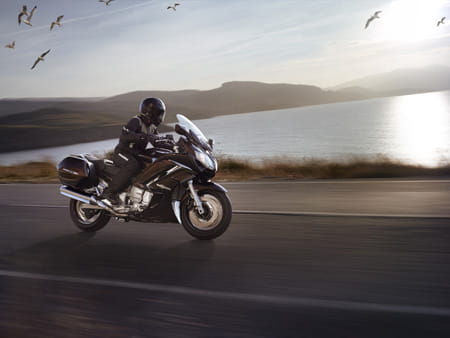 If ever there was a bike that is sorely undervalued in its guise of touring machine then it has to be Yamaha’s old gunslinger FJR1300. It is the bike that everyone forgets about when making a decision to buy a bike that is comfy, effortless to ride and value for money.

With an engine capacity of 1298cc, the FJR’s four-cylinder lump is built for low-rpm torque and is, therefore, a silky smooth performer capable of illegal speeds in the UK* but perfectly at home on the Autobahn. It’s also a known quantity – the FJR is a long-running Yamaha model – and has a deserved reputation for reliability.

The engine wouldn’t pull a house down but it can cheerfully lug the contents from England to Slovenia and back with ease. Twist the throttle and the wave of torque every time one of its five gears goes home digs the rear tyre into tarmac with absolute smoothness. If it wasn’t for the shaft drive that occasionally ‘clonks’ through the frame on down shifts you’d think final drive was actually belt supplied.

There’s a lot more to the FJR than meets the eye. Included in the FJR’s price are heated handlebar grips – a blessing in anyone’s books – and matching hard-case panniers. And supposing you can’t fit a pillion’s and your clobber in them, it’s good to know the steel tank will accept a magnetic tank bag. A big one too because the tank holds 25-litres of unleaded, which makes Honda’s VFR1200F 18.5-litres waif-like.

Holding a steady 75-80mpg while riding solo only nets 44.3mpg on a straight run, so, the old girl isn’t the most economical. This means a theoretical 243 miles can be covered before the FJR grinds to a stop. Fear of pushing 270-odd-kilos (Yamaha claim the FJR weighs 291kg) meant never going past 210 miles before refuelling.

ABS as standard is old hat today when compared to today’s fancy of traction control. The FJR doesn’t have traction control but it does have a good combined braking set-up married to ABS. The braking system is that good it makes light work of the weight that needs to be hauled up. Initial bite from the front brakes could be stronger but you can’t have it all ways – unless you use the rear brake at the same time in any braking situation and then you can relax a few yards earlier.

Now think on the fact that the FJR has an electronically adjustable fairing screen, height adjustable seat, reach adjustable handlebars and simple rear shock preload adjustment, and the next time the thought of owning a decent tourer pops up in the brain, don’t forget the FJR1300A. You won’t be disappointed.

*not that we encourage them!

Get Yamaha Bike Insurance with Bennetts