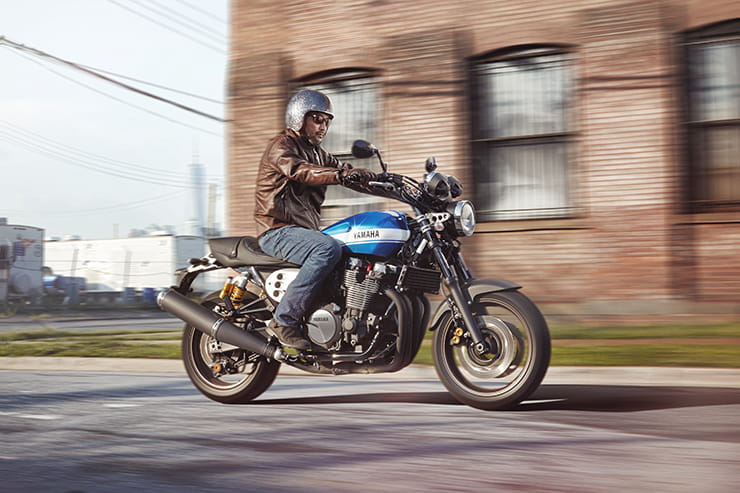 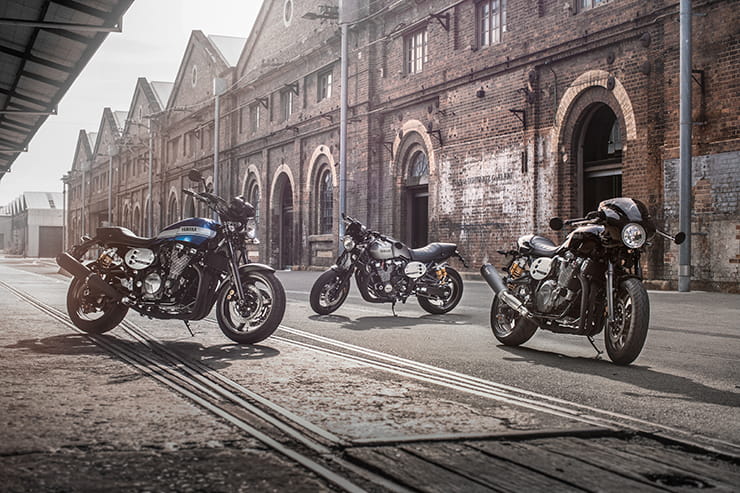 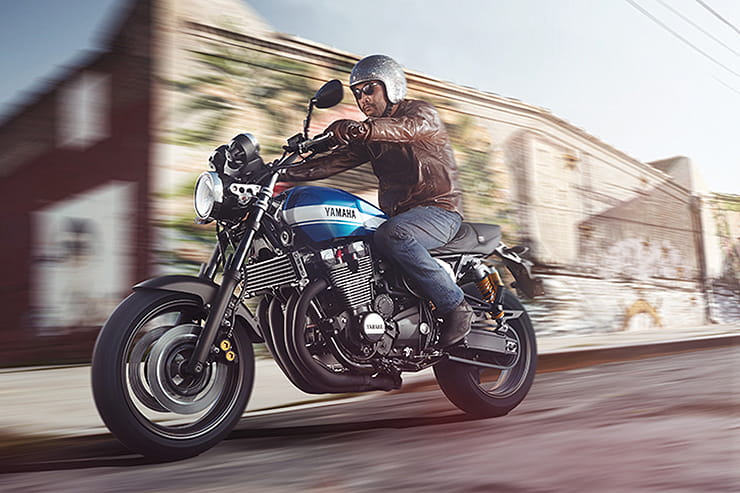 Yamaha’s XJR1300 is one of those bikes that has been steadily building up a dedicated fanbase throughout the years and those who own this air-cooled retro simply adore its old-school charm. Well, they did before it got all fashionable in 2015... Initially released in 1995 as the XJR1200, in 1999 it grew into the XJR1300 and stayed basically the same (bar gaining fuel injection and a few small engine mods as well as the SP’s Öhlins shocks) until 2015 when Yamaha decided to aim for the hipster market. Considering the previous model had managed to endure a lifespan of 16 years and the updated ‘trendy version’ was killed off in just two, you can see how much of a success this move was! Although to be fair to Yamaha, tightening emissions laws also played a large part in the demise of the XJR. If you are after a great-looking air-cooled bike with serious heritage and a relaxed attitude, the XJR1300 is a wonderful option, and the last generation isn’t actually that bad at all. In fact, it’s very good.

The XJR is dominated by its engine and the air-cooled 1251cc lump (which was the largest inline four on the market in 2015) is a real beauty. Absolutely stacked full of lovely low rpm grunt, it is silky smooth and a joy to ride. It may not make a huge amount of power with a peak figure of just 96bhp but this is a motor that is all about its torque and the 80lb.ft is delivered with turbine efficiency, making it super-relaxing to ride and totally unaffected in its performance by the extra weight of a pillion.

The air-cooled XJR is one incredibly solid lump and almost impossible to break, so you can buy with total confidence in terms of reliability. A lot of owners take advantage of the fact it is so exposed and therefore simple to work on and do their own oil and filter changes, which isn’t a problem however always be aware the valve-clearances need checking at 12,000 miles (usually it’s 24,000 miles on a Yamaha) which is best left to an expert. Aside from the possibility of a reg/rec or generator failing (highly unlikely) in terms of the mechanics, you can buy with confidence. In 2015 Yamaha painted the XJR’s exhaust black, which is helpful as it hides any marks, but the paint can start to wear thin, so check this area well and also look at the studs/bolts holding the headers on as they can get corroded and if you want to remove the exhaust and re-paint the headers black to freshen it up (it’s easy with a rattle can) they will need to be undone. Despite its old-school look, the XJR does have an EXUP valve so this will need a quick inspection to ensure it is opening/shutting freely but quite a few bikes run loud pipes and owners do remove the valve completely. It’s not an issue as the engine won’t run weak but a fault code may be thrown up on the dash unless the ECU has been tweaked or a bit of hardware installed to fool the sensor. Although a touch clunky (it’s old-school charm...) the XJR’s gearbox is very robust but it does only have five speeds, so don’t go looking for a sixth! Owners don’t seem too fussed about this as the XJR isn’t really a bike designed for sustained top speed runs, but you can vary the final drive ratios if you want to reduce the revs for motorway miles and improve its economy. 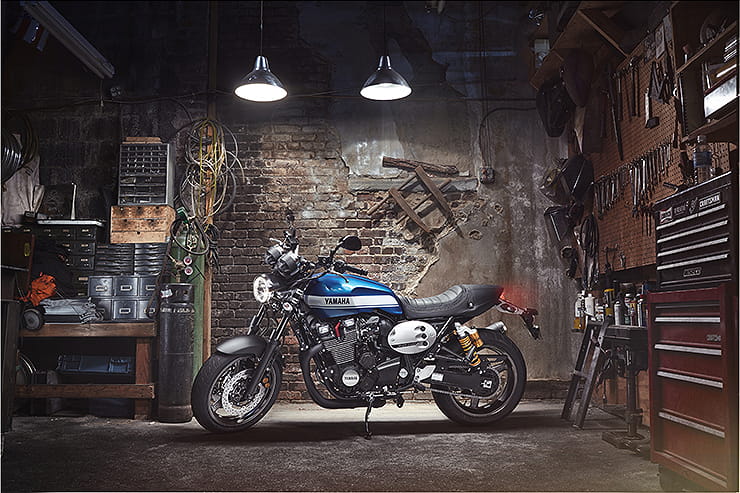 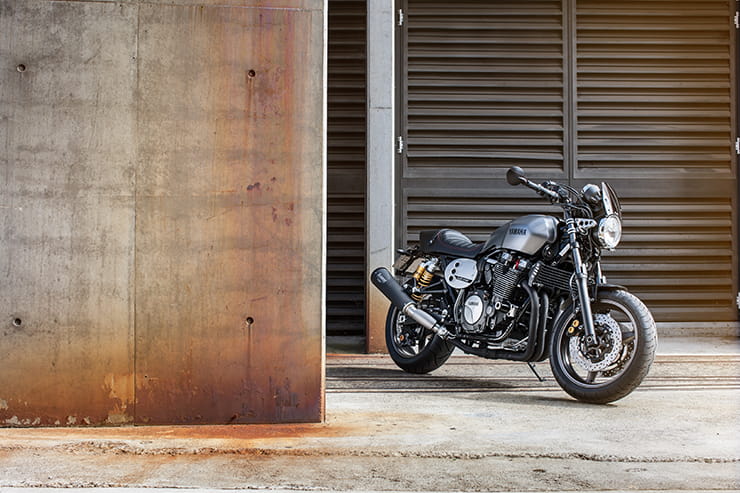 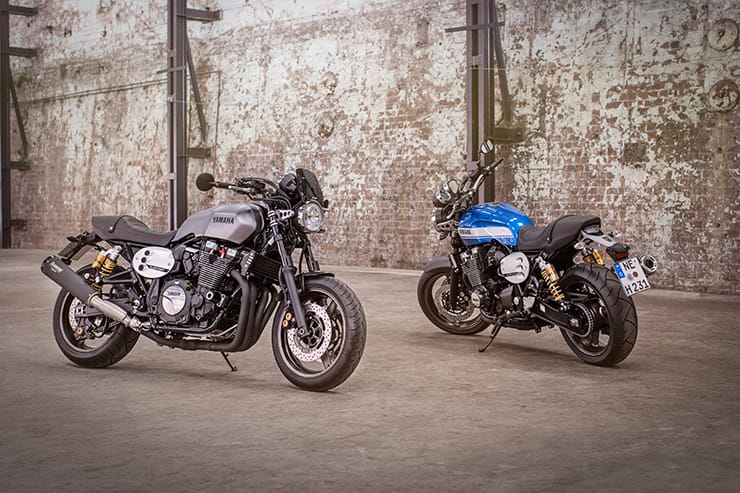 Despite its exposed riding position and five-speed box, the XJR delivers impressive economy figures with between 40 and 50mpg fairly easy to achieve and 45mpg a good average guide. That equates to nearly 150-miles from the 14.5-litre tank, which sounds like a lot but as the previous model had a 6.5-litre larger tank, which gave it a 200-mile-plus tank range and owners really loved that. This was a cause of much debate amongst XJR fans...

There is no denying the fact the XJR is quite a big old girl and a wet weight of 240kg means you are hurling a lot of bulk at a bend. This weight and the fact the XJR’s steel frame isn’t hugely sporty and the old-style conventional forks and twin shocks are set quite softly means you need to be aware of the Yamaha’s limitations. Yes, the forks received a DLC coating for 2015 and the bike has its usual Öhlins piggyback shock set-up (both ends are fully-adjustable) but both of these are ultimately more about styling than performance. If you up the pace a retro wobble soon starts to appear and let you know that if you want to go fast, you may need to look at a super naked with its sportsbike-derived chassis rather than an XJR. Keep the pace brisk, however, and the XJR is more than happy to play, and its wide bars mean you can muscle it around with a fair degree of sporting ability. Again, like the motor there is little to be concerned about with the XJR’s chassis in terms of reliability and so just look for the usual things such as chips on the fork’s DLC coating, any leaks and worn bearings in the headstock area.

The XJR uses the R1’s ‘orange spot’ four-piston calipers and they are more than up to the job. By now a set of braided lines will probably be needed, and high friction pads as well to introduce a bit more bite, but other than that they are fine for road use and deal with the bike’s bulk well. ABS was, surprisingly, never an option on the XJR. Always check the discs for wear as they are quite pricey to replace. 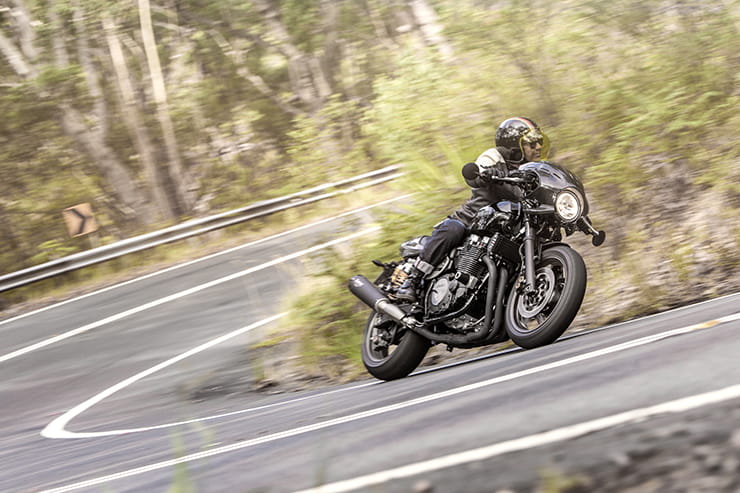 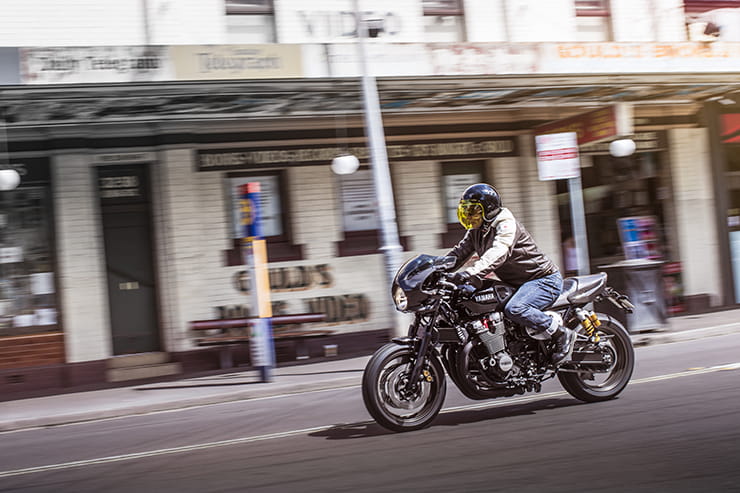 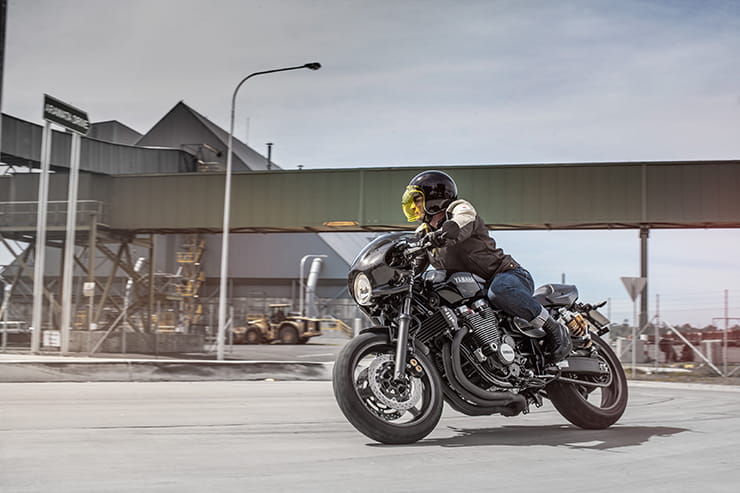 Here is the rub with the 2015 XJR 1300... In the update Yamaha decided to give the bike a sleeker silhouette and that meant altering the seat and subframe. The 2015 bike has a 10cm shorter subframe and a re-styled café racer seat where the old bike had a big old bench seat, and this is an issue for pillions. If you want to take a pillion, buy the older model as its sumptuous seat is a real joy for both rider and pillion and that means it is a great machine for two-up cruising. The 2015 bike is far more aimed at solo riders and while there are pillion provisions, they aren’t brilliant and certainly not a patch on the old model’s. So, can you cover distance on the new XJR? Yes. Yes, you can, it’s still a nice and relaxed bike with a roomy riding position and well-padded seat, it just isn't as plush as the older model when it comes to luxury. And then there is the Racer... A truly hideous bike in terms of comfort, the Racer adds a nose cowl as well as the worst set of clip-on bars known to man (well, aside from the XSR Abarth, which uses the same set-up) and that means it is absolute torture to ride. Avoid!

With no rider assists, not even ABS, the XJR1300 is about as old-school as it gets – but this was a deliberate move by Yamaha. In 2015 they were pushing the ‘Yard Built’ customisation theme and that meant everything had to be ready to be hacked (potentially, in reality no owner ever did this). The plus side of this is that if you want to make your XJR look a bit different, Yamaha did release over 40 accessories for the bike and also due to the fact the XJR is so loved, many aftermarket firms also cater for it. In terms of styling, bar end mirrors are common as are different levers, aftermarket exhausts, screens and tail tidies, all of which are cool and good to have. The parts on the Racer (it is just an XJR with accessories fitted by the dealer) can be added to the stock XJR, so you can bling up the bodywork with carbon and fit a carbon pillion seat cover but avoid the swallow tail clip-ons bars. Speaking of bars, a few owners update the XJR’s bars for chunky Renthal options, which look cool, but you need to check the brake and throttle lines aren’t overly stretched. As a rule of thumb, if it bolts on it can be taken off again so it’s ok, just avoid any bikes with more serious modifications such as hacked sub-frames.

The 2015 XJR wasn’t as popular as the previous model simply down to its reduced practicality, which as a major strength of the older model. If you aren’t too fussed about taking a pillion and want an old-school air-cooled retro with a superb motor and bags of charm, the XJR is a great option. A bit expensive considering its age but still a brilliant bike – just avoid the Racer!!!

Three things we love about the XJR1300… 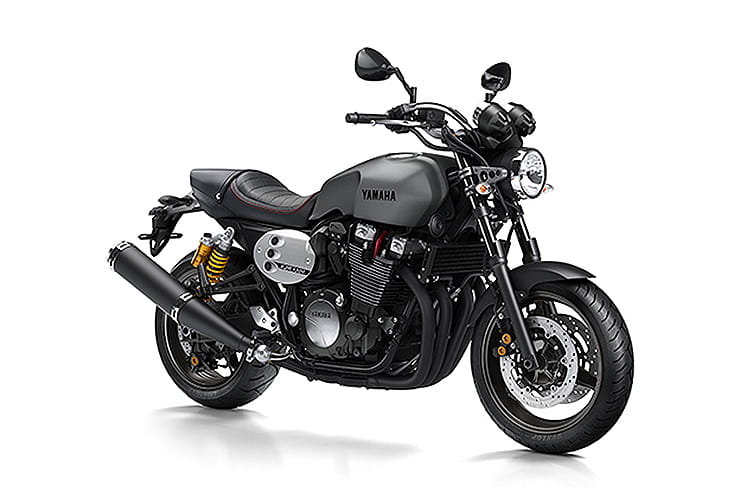 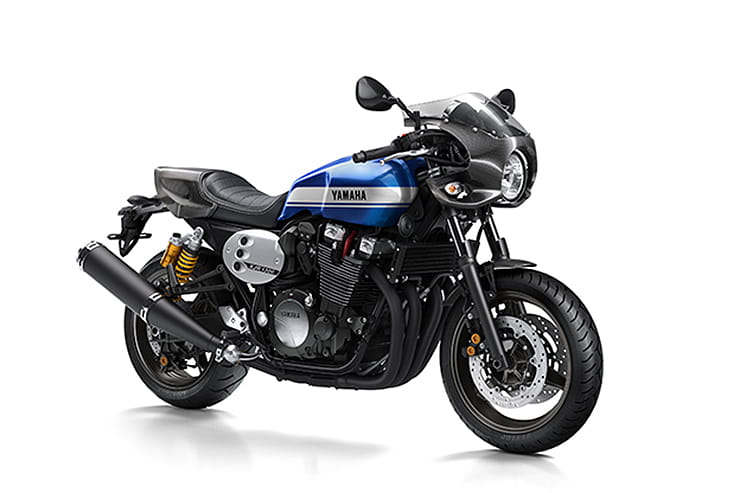 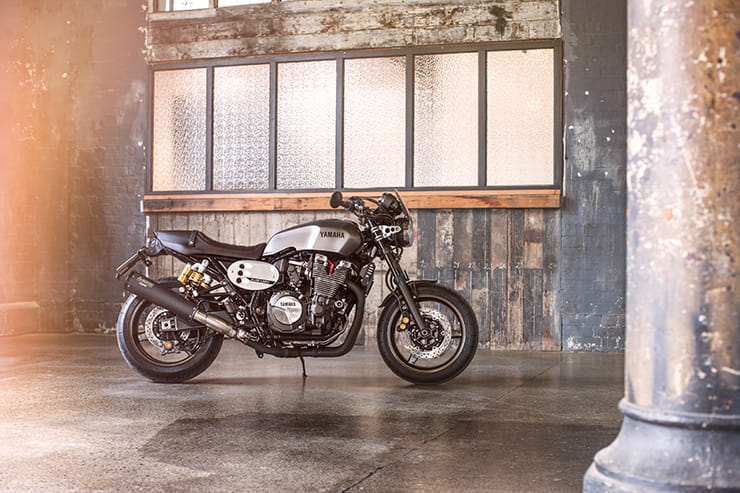