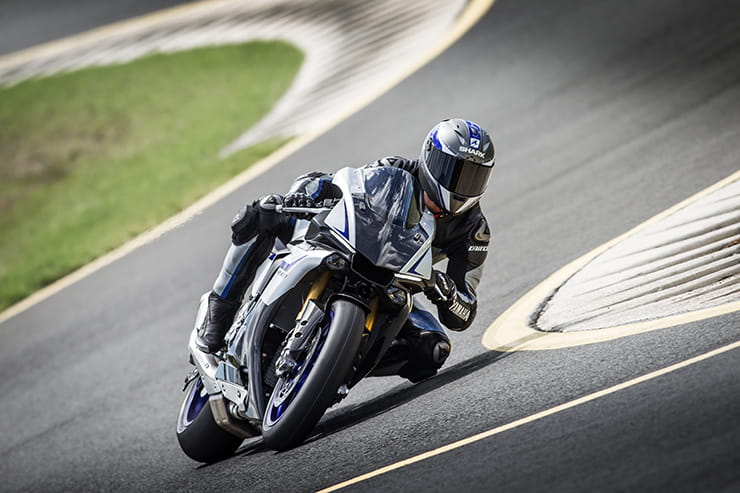 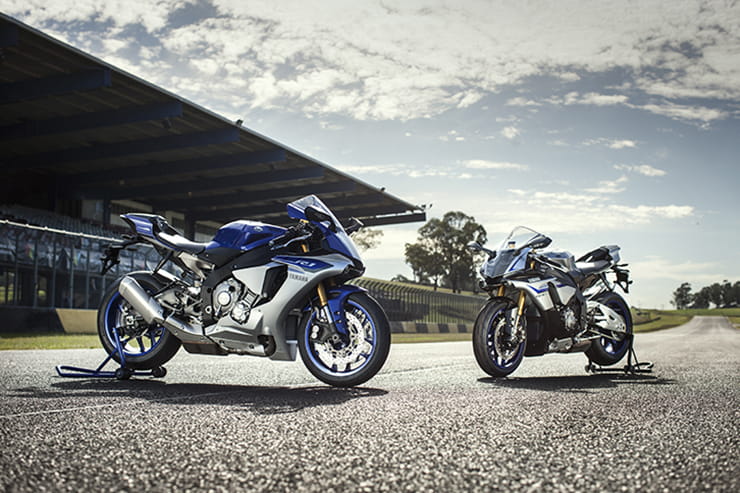 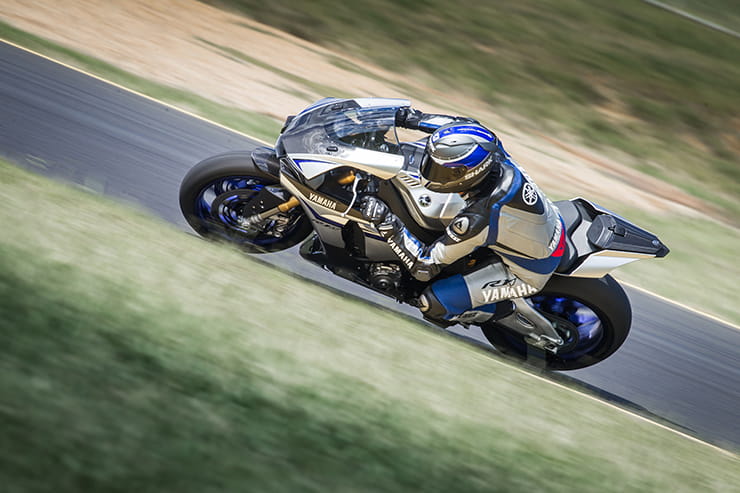 Billed by Yamaha as the ‘first fully-digital R1’, 2015 marked a huge turning point in the development of the firm’s litre sportsbike. Where the previous generation of crossplane R1 had success on the track (it won a WSB title remember) it was still quite road-focused with a relaxed power delivery and physically fairly roomy riding position – in 2015 this all changed. As well as massively upping the game in terms of electronic assists, the 2015 R1 shifted its focus far more towards track riding and even went as far as to employ a certain Mr Valentino Rossi’s assistance with the chassis’ development. And that wasn’t the only change. Although there had been an R1 SP before in 2006 (it was a bit of a bolt-on special and not actually that special) the 2015 R1 was joined by a full-on range-topping sibling – the R1M. Costing a scary £18,499 the M (the name a nod towards the firm’s YZR-M1 MotoGP bike) came with uprated Öhlins semi-active suspension and even carbon bodywork. If you are after a modern ‘digital’ sportsbike that sounds, looks and handles (on track) amazingly the R1M is astounding. As a pure road bike, however, it is a little bit compromised...

Although the all-new CP4 motor retains the same off-beat exhaust note and engine configuration as the older generation, in feel it is totally new. Lacking the lovely low-end drive associated with this style of engine, the new CP4 is far more track-focused and although it is gruntier than rivals such as the Kawasaki ZX-10R it does need to be worked. Very fast revving and once into the meat of its power (above 8000rpm) incredibly fast and engaging, on the road at legal speeds it does feel a bit lacking in drive (especially when compared to the likes of the GSX-R1000 with its variable valve timing) and through this impression encourages you to ride it faster than you really want to. If you are on track it suits smooth and rapid riding perfectly but on the road there is a slight impression that unless the speedo is displaying three figures it’s not that happy, which obviously isn’t ideal.

As modern sportsbike are so powerful, road riders struggle to even tickle the edges of their performance and that means reliability is generally excellent – which is certainly the case with the R1M. As so few bikes have covered over 10,000 miles you are highly unlikely to encounter any issues with the motor and thanks to the fact the R1 has a titanium exhaust as standard (including the headers) there are no issues with rust to be worried about. As on any modern bike you need to be wary of any fault codes as if gremlins get into the electrical system (generally it is a sensor going down) the repair bill can get quite high but on the R1 this is also rare. However there are a few things to be cautious about. A lot of R1s get either remapped or have a fuelling module fitted as the standard throttle connection is quite snatchy and the bike also guzzles fuel. The issue with an ECU remap is that if not done well it is harder than a fuelling module to get rid of as it can’t simply be removed, it needs to go back and get the ECU remapped again as the original Yamaha maps are overwritten. Always check the reputation (just go online..) of any dyno house that has done the work and see what else has been disconnected in the process! When it comes to the gearbox you also need to exercise a small degree of caution. The R1M only came with an upwards quickshifter until 2018 when a downshifter function was added (it can’t be retro fitted, aftermarket items are available). The issue with shifters on the road is that they are designed to work at high revs and continual low-rev use can lead to damage within the gearbox. Realistically the R1M is still a bit young for this to start to manifest itself, however always check on a test ride that there are no signs of excessive wear such as it jumping out of gear or feeling a bit notchy. Obviously, be wary of a bike that appears to be a track hack as that can stress the motor. 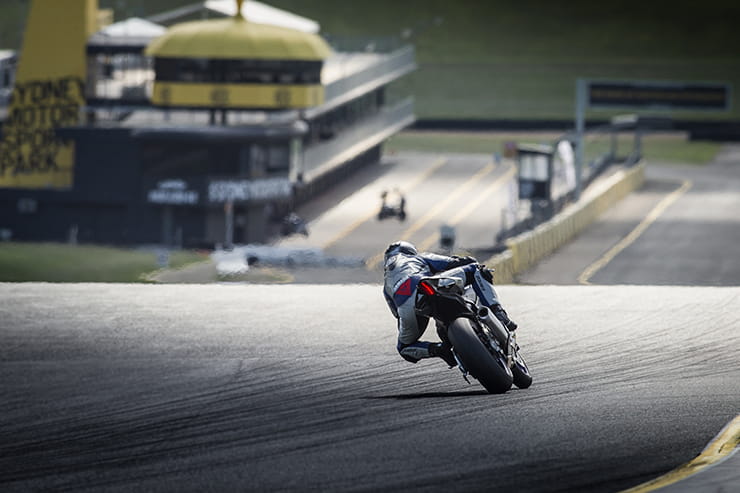 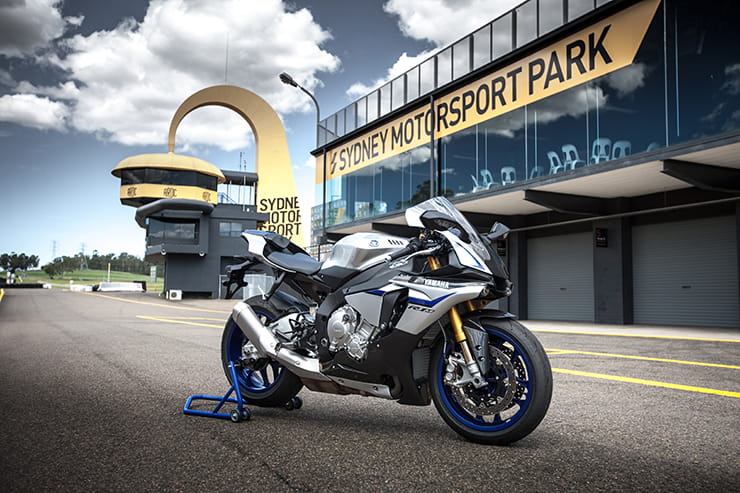 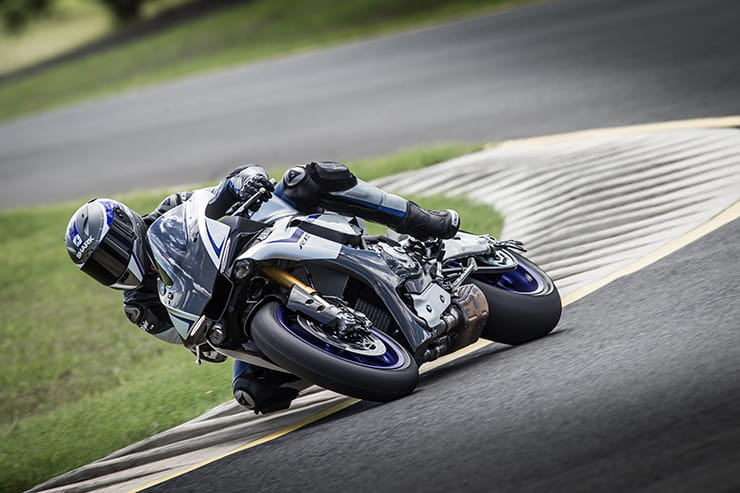 Not great it has to be said as the new R1 engine does have quite a thirst for unleaded, something that also bugs MT-10 owners. If you expect to average about 31mpg and see the fuel warning light at about 115 miles you won’t be disappointed. On track, however, it plummets – so always bring a good supply of fuel cans with you!

This M model’s main advantage over the stock R1 is the fact it features Öhlins semi-active suspension where the base bike has stock KYB units. The Öhlins Electronic Racing Suspension (ERS) is linked to the IMU and responds to the bike’s angle and also its pitch, so firms up under hard braking/acceleration. With ‘Automatic’ and ‘Manual’ modes, each of which has three setting (auto has two that also allow fine tuning) the system is extremely impressive both on the road and track and makes a significant improvement in the ride quality, especially over uneven surfaces - although it has to be said, the standard settings are quite firm for the road. A major advantage the R1 has over some rivals is the fact the Öhlins units are fully rebuildable, which is reassuring for used bike buyers as new OE electronic shocks are over £1000 if you need to buy them. The system’s ECU was updated in 2018 to include the latest Smart EC 2 with increased intelligence. Although the differences in feel between the two systems (especially on the road) is minimal the interface and way you can alter the damping is improved on the updated model. On track the R1’s handling is sublime, helped by lightweight cast magnesium wheels (always check for dings) and also the fact the M has a fatter 200-section rear compared to the stock model’s 190, which assists when you are in full attack mode. On the road the story isn’t quite as rosy as while the R1 is really agile and light, making it easy to manoeuvre, the riding position is cramped, suspension firm and engine quite aggressive, which means it is a pain at low speed. If you only ride on fast and flowing roads it’s a joy, if you need to go through any built-up areas, it’s not great. There again, how often do you see Rossi popping down the shops on his YZR-M1, so what did you really expect...

The R1’s brakes are a point of debate. Featuring Yamaha’s Unified Braking ABS system, the front and rear are linked so that when you apply a lot of force to the front, the rear is also activated. Designed to help balance the bike under hard braking, the issue the R1 has is that when used very hard on track, it has a tendency to cause the rear to drift into bends, which is a bit unsettling. Also, Yamaha’s choice of pad compound isn’t the best, delivering a lack of bite that needs to be cured through a set of aftermarket pads (the 2020 bike has not only a new pad compound but also engine braking control to cure these woes). Happily, braided lines are standard fitment on both the R1 and R1M and on the angle-sensitive ABS is excellent both on the road and track for the vast majority of riders. 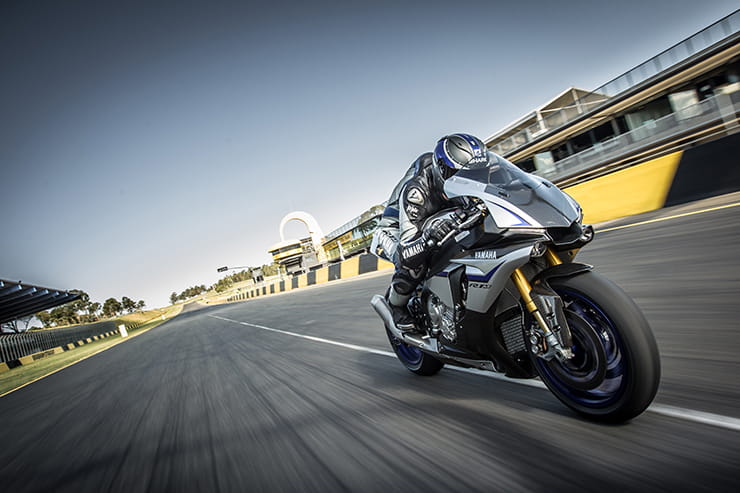 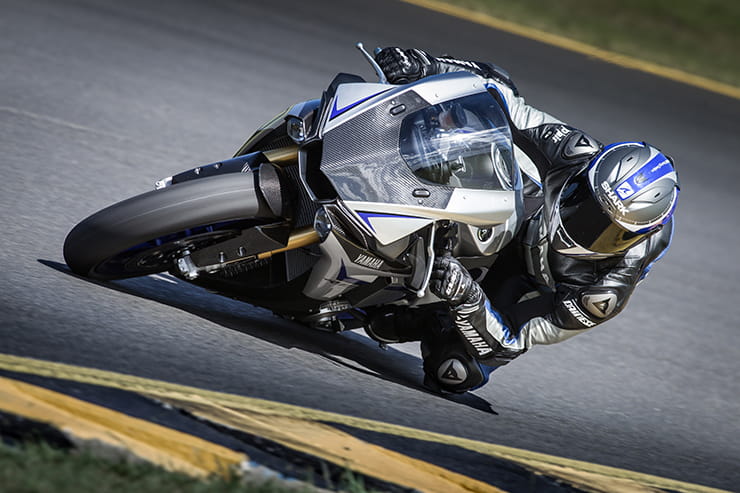 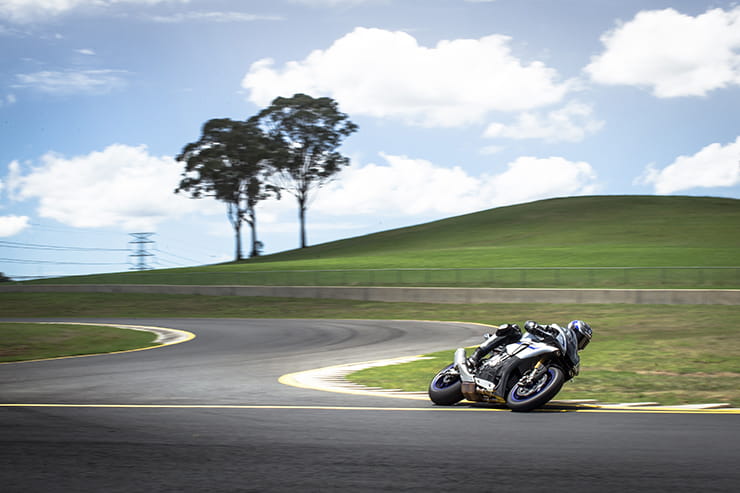 Rossi manages 40 minutes on his M1 and that’s about all you want to do on the R1M as its supersport-style riding position is aggressive with low bars, a firm seat and high pegs. A lot of riders fit a taller screen, which is a good idea, but realistically this is a track-focused sportsbike and that means touring is off the menu unless you are prepared to put up with a degree of discomfort. Taller riders will find it especially unpleasant.

Where do you start with the acronym-laden R1M? Yamaha threw the digital kitchen sink (almost...) at the R1M and with its six-axis IMU controlling the show you get traction control, ABS, slide control (allowing you in theory to drift the bike out of bends in safety), four power modes, launch control, anti-wheelie and a TFT dash with a ‘street’ or ‘track’ display mode. In addition, the R1M comes with the Communication Control Unit as standard, which is a comprehensive datalogging system that can connect wirelessly to a laptop. The quickshifter was up only until 2018 when it gained a downshift function alongside the anti-wheelie being refined and the ECU’s maps upgraded. In terms of accessories, not that many M models get altered and side from an exhaust end-can (Akrapovic is the most popular) and tail tidy, you are basically looking at crash protection and maybe a taller screen. One option the R1M doesn’t have is a choice of paint – it only comes in Silver Blu Carbon...

While undeniably a seriously track-targeted machine, the R1M is also a really rewarding bike to ride as long as you are prepared to put up with the fact it is so small and compact. On track and the right roads it is superb, however for day-to-day riding or on uneven surfaces it’s circuit-focus works against it, spoiling the ride.

Three things we love about the R1M… 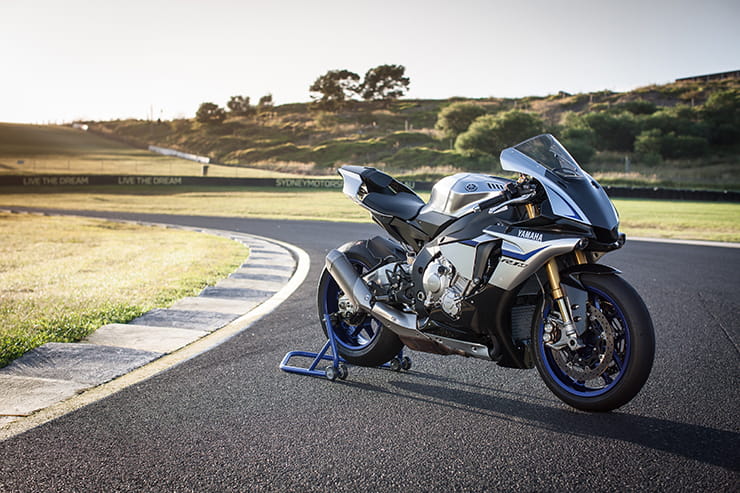 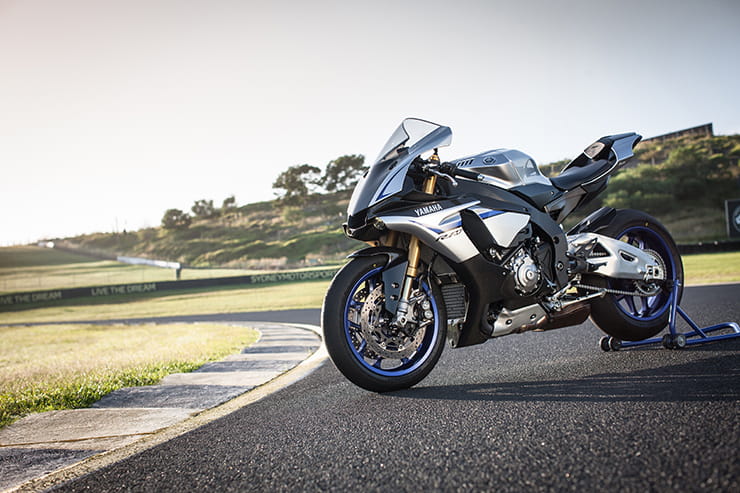 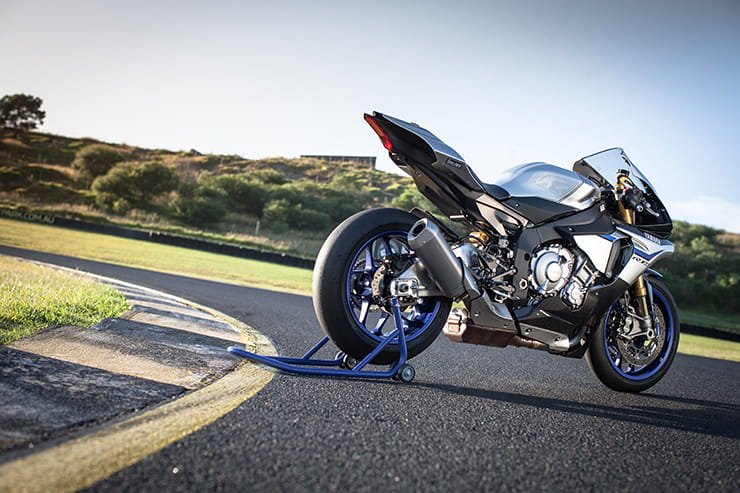