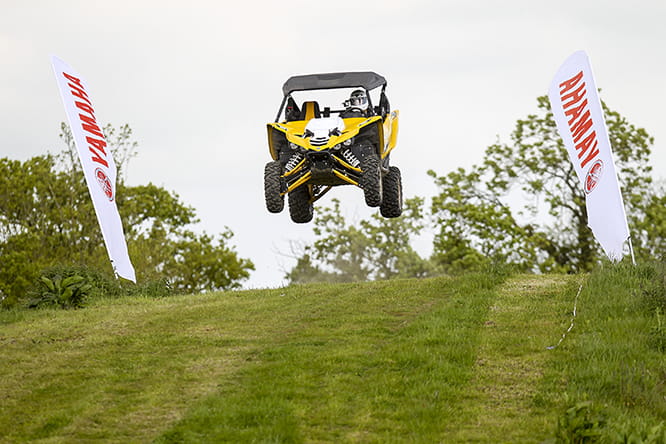 With a three-cylinder 998cc four-stroke engine making 110bhp, a sequential five-speed gearbox, a top-speed of 80mph, and 12-18” inches of suspension travel, Yamaha claim the new YXZ1000R is the most amazing amount of fun you can have this side of a motorcycle. And we’d agree. The triple screams like any high-powered Yamaha MT-09, the gearbox is sequential like a bike, and the way it handles jumps would put most motocross bikes to shame. It even comes in Yamaha speed-block yellow. Just don’t mention our test rider/driver putting one of the £18,000 Yamaha YZX1000R SE buggies on its roof…

But let’s put it out there before we start. No, this isn’t a motorcycle, and yes, this is Bike Social, not quad social or side-by-side social. But, Yamaha UK have had so much interest from motorcyclists since they launched the all-new sports side-by-side earlier this year that they wanted to get some motorcycle journalists in to test them. Who were we to say no?

It’s right at the point where the Simpson safety system is hanging me upside down from the roll cage as I’m upside down and 699kg of finest honed steel is surrounding me and stopping me crushing my neck that I realise I may as well reach or the key and turn it off. Perhaps I should have said no after all. At least I was in the lead, but did manage to do it while racing Yamaha's ace PR man Jeff Turner. Gutted doesn't even begin to say how I felt at that point.

On a bike when you crash you get flung free of the bike, usually. In a car or side-by-side you’re so well clamped in that you’re just hanging upside down, waiting for someone to get you out so you don’t just end up unclipping and landing on your head. 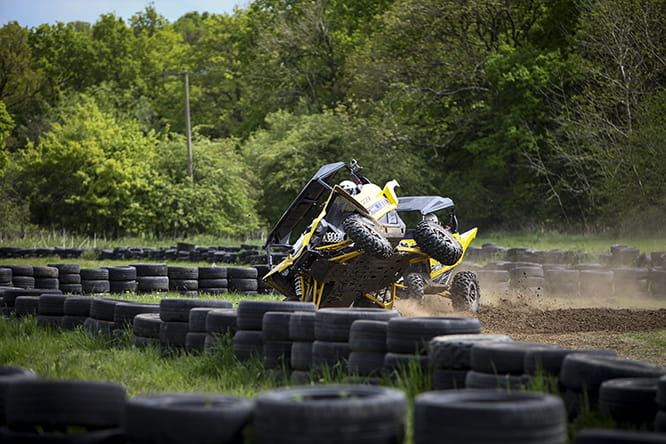 Marshalls come running and try to turn the YXZ1000 and its 92kg passenger over, before I’m unclipped and clamber out for the walk of shame back to the pits where Yamaha’s Jeff Turner is waiting. This is what happens when you let motorcycle journalists in things with too many wheels... What a dick.

At the briefing the main man John Thorne of Thorney Motorsport near Silverstone in Northamptonshire had told us: “The chances of getting yourself in trouble is highly possible. They weigh in at 700kg and if it goes wrong there’s a chance you could break your arm. They have 15 to 18” of suspension travel but that means when it goes wrong and they unload there’s a lot to let go. Drive it almost like a boat with slow and steady steering movements.” Essentially, these aren't toys, they're a full-on race car you can buy from Yamaha, and they demand respect. 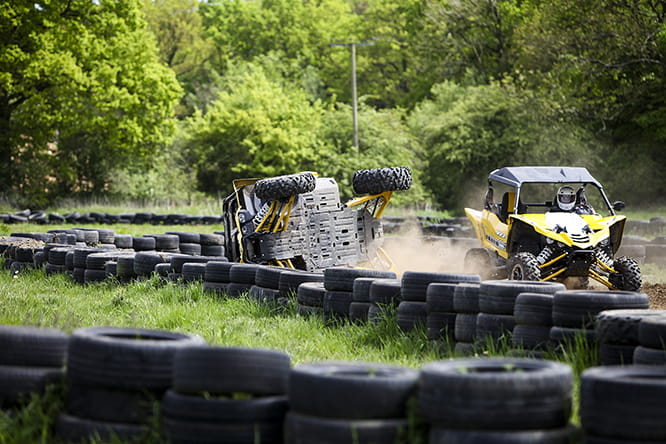 He knows this stuff, is a former British Touring Car driver and races a Yamaha YXZ1000R in a British championship. If only I’d listened. Sorry John, Sorry Jeff Turner at Yamaha.

The Yamaha YXF1000R is Yamaha’s attempt at filling in the lucrative market for sports side-by-sides that is taking off around the world, but mostly in America where they have massive deserts to ride, sorry, drive around on. But that hasn’t stopped Yamaha bringing them into the UK for the Britpart MSA British Cross Country Championship, and there are plans for a two car team in the Dakar in 2017. Around 100 cars will come into the UK, many bought by rich, frustrated blokes looking for speed thrills and something different to two wheels. It’s roughly the same price as a Yamaha M1 and is a hell of a lot of metal and excitement for the cash.

Walk round it and any red-blooded petrol head can’t help but be amazed by its purposeful presence. It looks angry at a standstill. The massive suspension travel, those huge Maxxis off-road tyres, the roll cage, the race bucket seats, the dash and gear indicator, it’s an impressive bit of kit. It can be run in 2WD, 4WD or even with the diff locked so that it will get over or through absolutely anything, but the diff lock restricts revs to 6000rpm.

The motor itself is taken from a Snowmobile, and uses a three-cylinder 1000cc four-stroke liquid-cooled engine that makes around 105 to 110bhp in standard form. If you’re racing one there’s a variety of options available including a kit that frees it up a bit more with a new ECU remap, race exhaust and manifold, bigger 15” wheels, FIA-approved roll cage, fire extinguisher, FIA-compliant seat, hi-vis lighting, electronic cut-off switch and Toyo MT or AT tyres. Everything you’d need to turn it in to a full-on race car is available including the car for £21,500 including VAT, the exhaust, ECU and a few other options are extra. Or you can buy a race kit for £3999 including VAT. Six UK dealers are set-up to sell them and to fit the kit if required, including the genius fellas at Thorney Motorsport where we drove the cars. 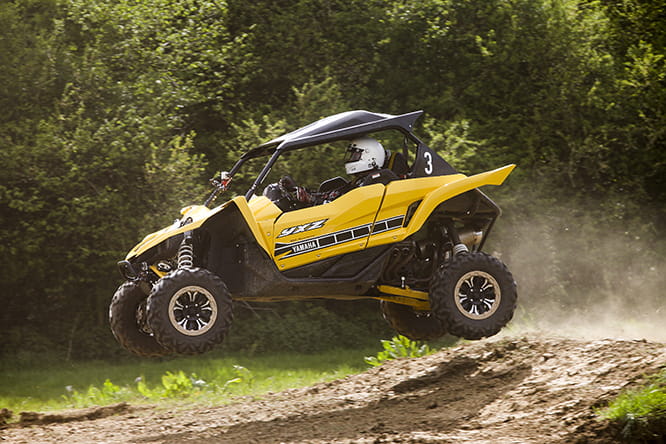 But enough about the spec – what’s it like to drive? In a word – intense. It’s not as quick as a bike but then you’d struggle to find anything that is. But it gives you the same levels of adrenaline that you get from riding a fast road or motocross bike. The engine is frenetic, yet torquey. There’s a distinctive three-cylinder howl from the motor that revs high enough to scream, and when you bang it into gear (John from Thorney Motorsport says be vicious with it) you get the same feeling when banging through gears on a motorcycle. You’re rewarded with instant drive and then it’s a case of trying to balance your right foot pedal with the grip from the Maxxis tyres on a loose surface. What most motorcyclists aren’t prepared for, including me, are the jumps and more importantly, the landings in something with four wheels. I’ve had a few club MX races in the past, but four wheels in the air takes on a whole new world.

On an out lap with a professional instructor I’m shocked at how fast you can take the jumps and how beautifully the car lands. The trick is to come at the jump with a neutral throttle, then gas it as you hot the face of the jump, this lift the nose, and then as soon as you’re in the air, shut the gas and let it land slightly nose heavy. The quality of the Fox suspension is incredible. Later, I get the hang of it and you can hang three or four feet in the air and it lands like you’re hitting cotton wool, not a hard muddy field.

Steering it is a different matter. You have to get all your braking done on the straight. The brakes are fantastic and you’ll be surprised just how much grip there is on loose, dry, mud. But try and brake in a corner and it all gets a bit, well boaty, and floaty. Hence why I managed to turn one over. The lesson? Don’t let an idiot motorcycle journalists in car, though to be fair we did manage to secure a third placed trophy in the final race. Respect to SuperBike's John Hogan in second and Bike World's Luke Bowler for kicking my ass and taking the win. 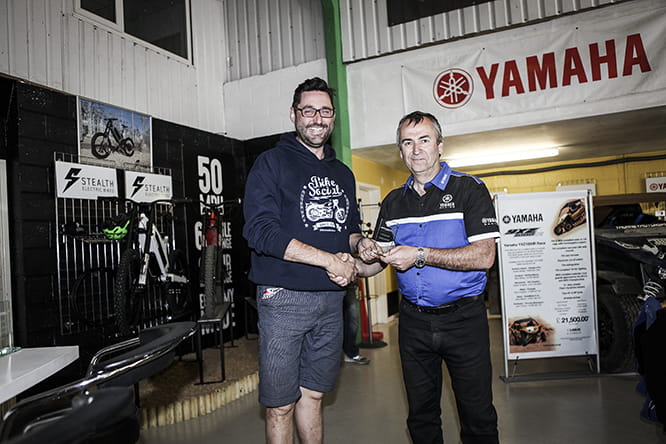 But if you are a thrill-seeker with access to some land and want one of the best thrills this side of anything on two wheels then the YXZ1000R is the ultimate boys’ toy. Racing these is one of the best experience you can ever have in anythng with wheels - two or four.

If you fancy having a go then Thorney Motorsport offer an YXZ1000R experience day (as we did) which includes practice, qualifying and three four car races, plus the chance to do a blindfold driving challenge in a Yamaha Viking. It costs £499 per person, per day. Contact them here or email: info@thorneymotorsport.co.uk