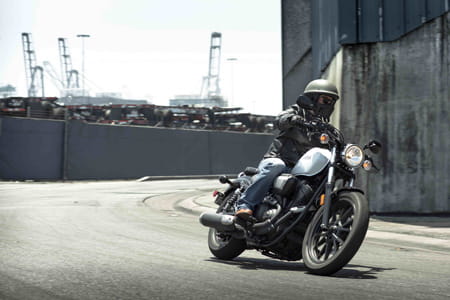 To many, cruisers are the domain of one manufacturer – Harley-Davidson. However, look aside from the obvious and there is a vibrant sub-culture of laid-back bikes from Japan. While some may instantly turn their noses up at the thought of a cruiser that isn’t from America, the fact of the matter is that quite often these bikes are actually not only cheaper, but also better performing than the bikes they replicate. Which is exactly the case with Yamaha’s new XV950 and XV950R. 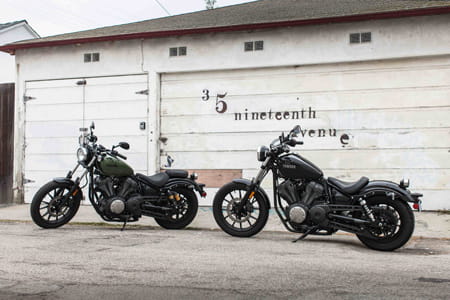 Using a traditional cruiser air-cooled V-twin motor, the XV models have four valves per cylinder with a single overhead cam opening them. Producing a claimed 51bhp with 58lb.ft of torque starting at 3,000rpm, the XV’s natural competitor appears to be Harley’s entry level 883 range. Although it’s not quite that simple. 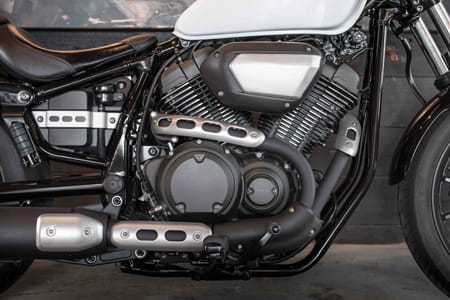 Yamaha have placed the XV models in a new category that it calls ‘Sports Heritage’. Basically this class, which also includes the XJR1300, VMAX and forthcoming SR400, is a range of machines that Yamaha claim encapsulate the traditional values of motorcycling. They are not only fun machines, but also bikes that lend themselves to customisation. Again, this may sound a lot like Harley’s territory, but when Yamaha say customisation they not only mean performance modifications such as loud exhausts, but also going as far as turning the machine into a different style of bike such as a flat tracker or cafe racer.

By getting various customisers such as Roland Sands on board to design ‘kits’ that transform the look of the Sports Heritage, Yamaha are hoping to attract younger, fashion conscious riders towards their bikes. But for this to succeed not only does the base bike need to be good, but also the various customisation houses need to start producing kits and riders need to buy into the ‘Sports Heritage’ concept. While Yamaha can’t necessarily influence whether or not this trend gathers momentum, what they can do is ensure the bikes performs up to standard, a job they have more than succeeded in doing with the XV950.

Yamaha call the XV a ‘performance bobber’, which basically means it has less forward foot pegs, flat and low bars and a motor with a bit of poke. Cruisers sell as much on looks as performance and Yamaha have done a great job of styling the XV. With a matt black exhaust system and black bars, engine and levers and neat brushed aluminium covers the XV looks really good.

Mean and moody, yet still classy. The R version, which costs £300 more, gains ‘piggy back’ shocks, a different seat cover, a stripe on the matt coloured tank and ABS but other than that it is identical to the stock bike.

To ride the XV is surprisingly entertaining. The V-twin engine has a deep exhaust note with a smooth throttle response and strong spread of torque. In town the clutch is pretty light and the low speed control easy thanks to a good weight distribution, however it is on the twisty roads the XV demonstrates its superiority over a Harley 883. 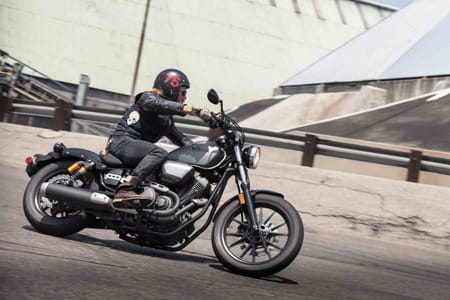 Start working through the clunky gearbox (it’s a cruiser, this is normal) and introduce a few bends into the equation and the XV is remarkably assured. While the ground clearance is typically limited for this style of machine, the Yamaha’s suspension and geometry make it surprisingly good in the bends. Once lent over (ignore the scraping sounds) the XV feels assured and well balanced through the corners and is certainly a better handling bike than an 883. You can chuck the XV from foot peg to foot peg through an s-bend and it will respond without going into a frenzy of wobbles as despite the suspension being set soft, it still has a sporty edge. And it’s reasonably comfortable as well.

With just a 12-litre tank you aren’t likely to be taking the XV on a huge journey, however for 60-80 mile runs at sub-70mph speeds (the tank should be good for around 110 miles) the XV’s seat is fairly well padded, the riding position relaxed and the vibrations from the motor non-intrusive. Aside from the addition of ABS the R and stock XV are virtually impossible to split, the R’s shocks offer a very slightly plusher ride, but in all honestly it’s only a subtle difference. But will either XV sell? 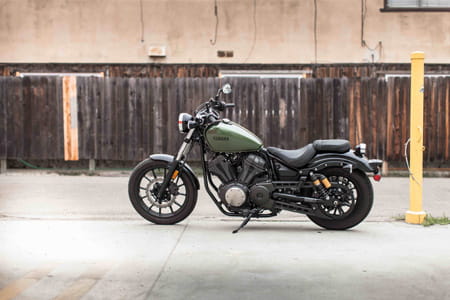 The truth of the matter is that the XV is a better bike that the Harley 883 while costing about the same – however will this fact alone attract sales? The main problem Yamaha have is simply down to snobbery, riders who want a Harley want a Harley because it is a Harley and won’t be tempted by a Yamaha. However riders who want a cool looking bobber that performs remarkably well and is very entertaining to ride should consider the Yamaha. If the whole ‘Sports Heritage’ customisation concept takes off the XV could open the door to a whole new world of motorcycling to owners. Imagine owning a bobber one year, buying a kit and then transforming the bike into a flat tracker over winter ready for next summer. Effectively you will have a brand new bike for a fraction of the cost of actually buying a new machine – if Yamaha can truly provide this facility to riders then they could well be onto a winning idea.