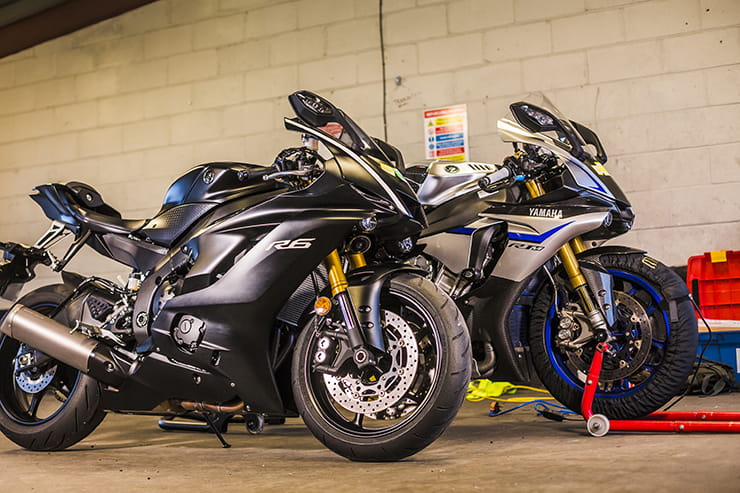 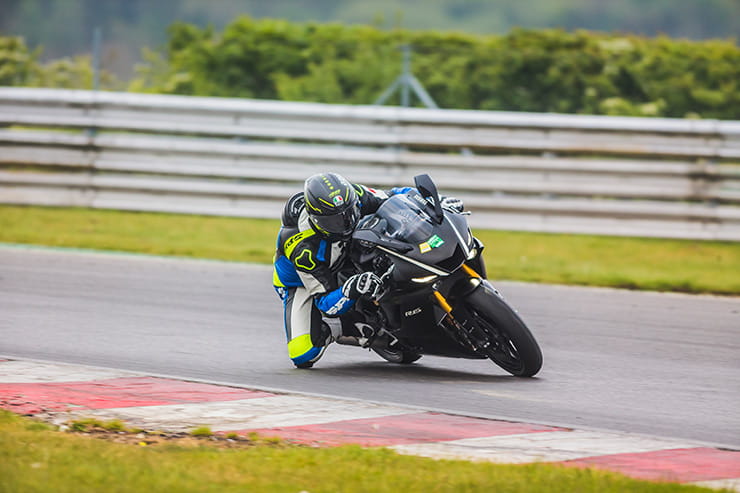 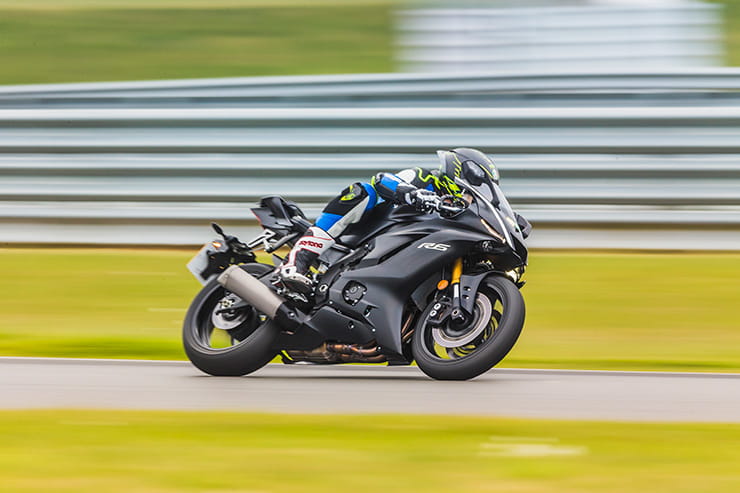 Six things we learned about the new Yamaha R6 on track

BikeSocial’s tame racer (former Manx GP competitor and Yamaha R1M owner) Kane Dalton took Yamaha's new YZF-R6 to Snetterton for an MSV Track Day. So, how does it go in the fast group at one of the UK’s fastest tracks?

BikeSocial’s R6 test bike and my own Yamaha R1M are side by side in the pits at Snetterton. The R6 looks even more menacing with its dark, matt finish. That huge, central ram air intake looks like it would bite your arm off. It's neat, small, compact and begging to be ridden fast. 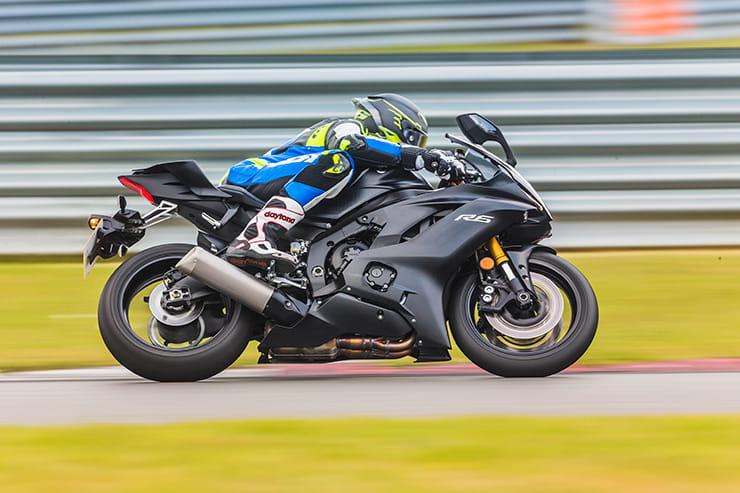 The new R6 has most of the expected 2017 electronics. Three riding modes, six-stage traction control and ABS. Even on a cold, slightly damp former airfield in Norfolk, I left the traction control on setting one (the least invasive) and used engine mode ‘A’, which gives the sharpest throttle response. There is also the option to turn these off if you prefer.  You can also fit the CCU datalogger found on the R1M to the R6 and overlay the following information.

For track-only riders or racers there are a couple of race kits; 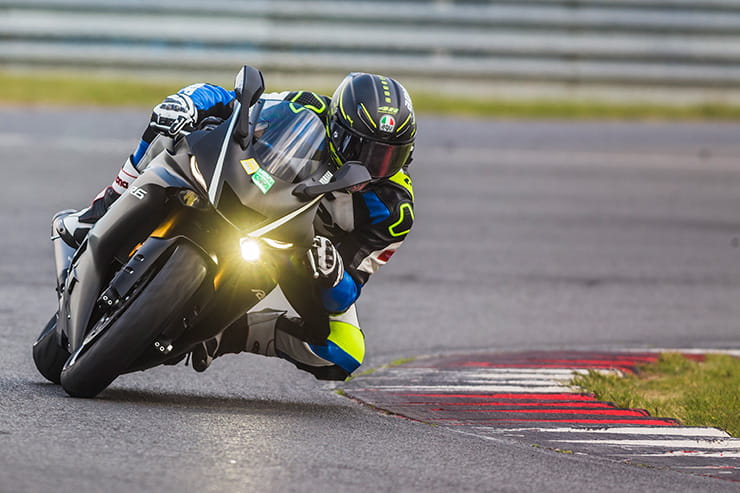 3. It’s easy to get along with

I left the pits on cold tyres which gave me time to get familiar with the layout. The riding position is focussed as you’d expect, like the R1 it feels like a race bike for the road. The tank has a great shape with deep knee cut-outs making it really easy to lock in.

The dash is simple and easy to read with a large analogue rev counter. The digital gear indicator is great and the traction control is adjustable on the move with easy to use large switch. 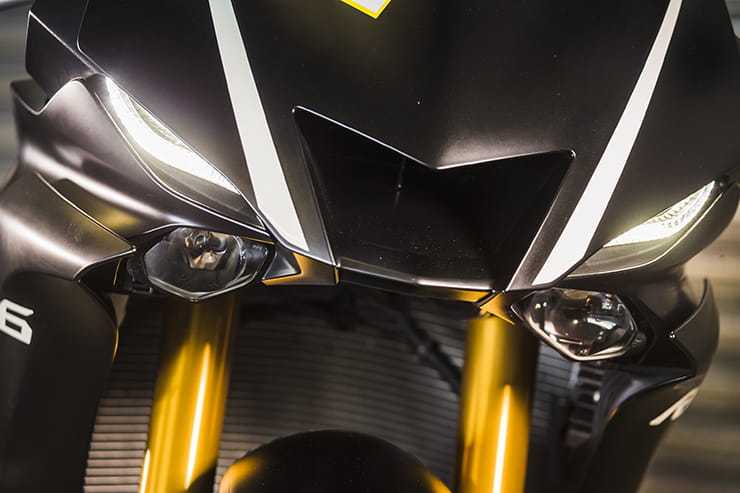 4. The suspension is superb

I put 4 clicks on the front KYB forks compression and rebound and left the back on its standard settings. This was going to be my base to work up or down, although as it turned out I left it just like that with no further adjustment. Riding the R1M back to back with the R6 for a direct comparison I was really pleased with set up and was happy and confident to get my head down and push hard. Under heavy late braking the front end was stable and it was really easy to turn in when I came off the brakes.

Mid corner the bike is surgical and precise. I found myself enjoying the long way round and overtaking around the outside - not bad for a supposedly "gutless 600". 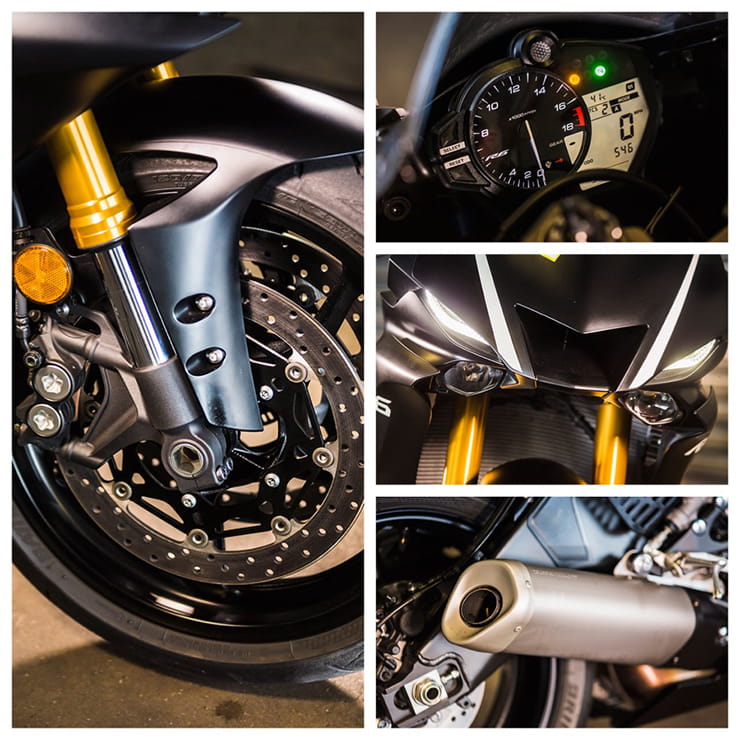 Like all 600’s you need to rev the R6 to get the best out of it. The power delivery is smooth and linear. On corner exits I could open the throttle to the stop and let the bike rev through to 16,000 rpm as aggressively as I liked with no issues at all.

Red line is marked at 17,000rpm. I set the gear shift indicator to 16,000 rpm and enjoyed the luxury of a quickshifter. The limiter was smooth when it kicked in. Tucked in down the Snetterton straights I was seeing 150 mph on the dash before having to hit the brakes. (I am tall and heavy so lighter jockeys will see better performance).

The quickshift works really well. You can stay on full throttle as you click up through the box which sounds amazing. I’m spoilt having the downshift assist blipper on the M, making it so much faster, easier and more stable changing down. You can downshift an R6 without the clutch, but there’s no downshift assistance, well technically there is if you invest in the Race Kit. 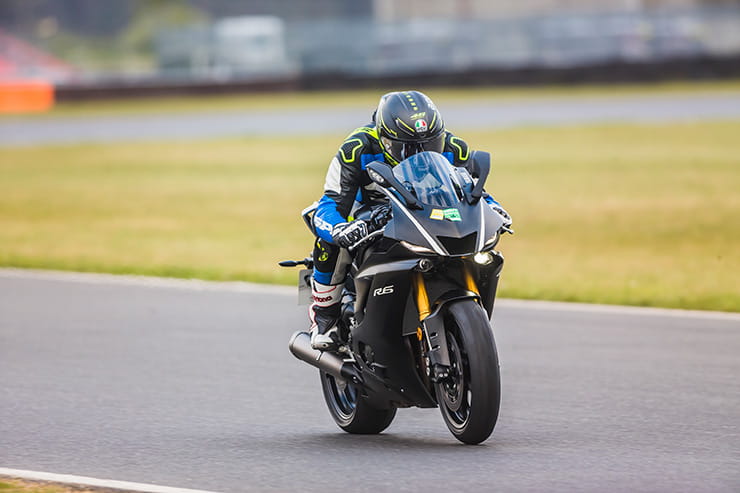 When you are tearing along at 150 mph you need the tools to get the bike stopped. I was having to re-calibrate my braking point on the R6. Riding back to back with the R1M my approach to the corner was faster and the braking point was earlier on the M. As I pushed the R6 I found that I was able to brake later than the R1M and then later again as I got used to the brakes and the bike. There was no noticeable intervention from the ABS even when I had the back wheel in the air. (I must not have been trying hard enough)

The R6 is undoubtably the new benchmark supersport bike. Ok, it’s the only new supersport bike for at least three years. That’s irrelevant, it’s still brilliant, and, as a package, it moves the class on significantly. Expect to be overtaken by several on your track days this summer.

Thanks to MSV Trackdays 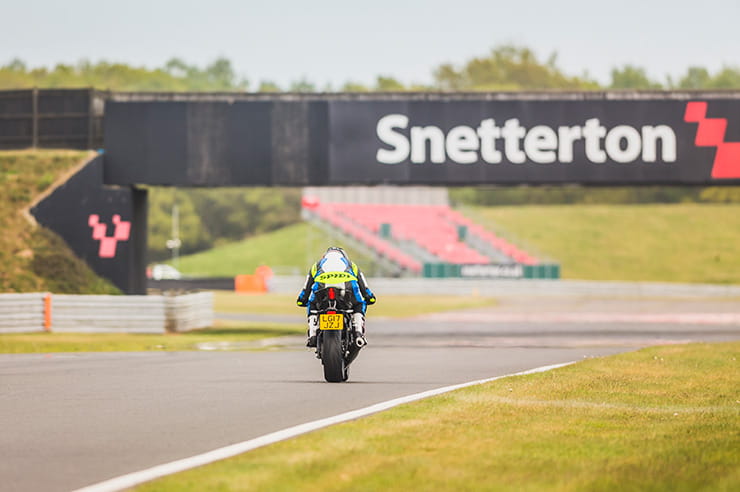