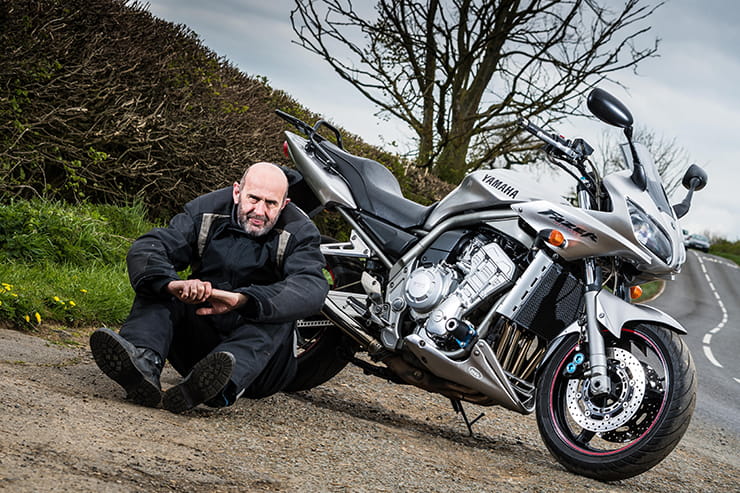 The movement is less than a couple of mm. A simple act of twisting a fifteen year-old suspension adjuster on the bottom of a shock absorber. These knurled-wheel, plastic Yamaha adjusters are usually seized after one winter and scrap by the first MoT. This one snicks into place like a brand new bike. This one thing, above all else, convinces me I have to buy this bike, because it has obviously been maintained by someone who really cares.

I blame Scott Redmond. BikeSocial’s used bike guru is also Eastern England’s most enthusiastic man. An hour in his company (no one ever gets less than an hour) is enough to make anyone fired up about cheap bikes and doing more miles. 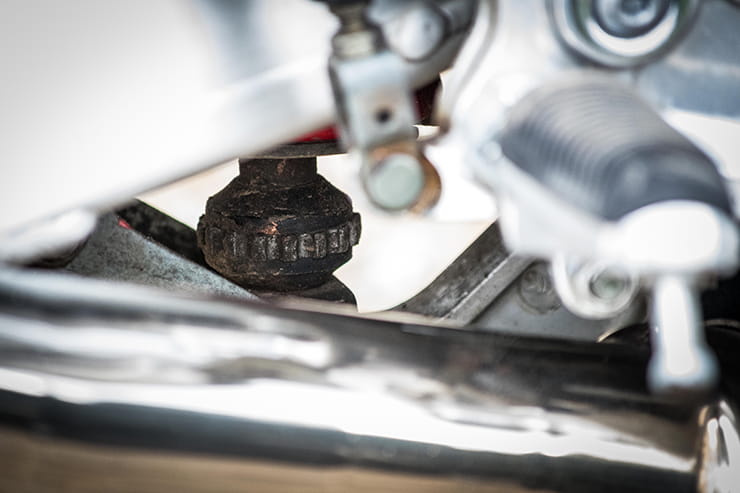 The adjuster on this Fazer turned like it was new

I ride every day and the longer the commute, the better. Currently it’s a 110 mile round-trip and, as much as I love my old Yamaha TDR250, it’s about as suitable for this trip as a 1959 Lambretta 125… with nitrous.

So, a few weeks back, me and Scottie were talking bikes. His £1000 ZZ-R600 project has come to a close and he’s looking for the next one, only this time, spending £2K, which gives a much better choice of bikes.  All the machines we talked about were bikes I could fancy and, as you do, a couple of pints into my evening had me looking around on Gumtree and eBay for local bargains.

Mr Redmond’s golden rule is “stick within a 30-mile radius of home, no matter how tempting it looks”. He’s right – a mate of mine wasted two months of weekends last year lapping the UK looking at tatty old honkers described as mint by their seller.

My golden rule is to not look for a specific make or model. The best £2k bike is the best bike you find for £2k, and it’s fascinating how some models are so much more expensive. Early-model Honda VFR800s (1998-2001) are a good example. These bikes are close-on 20 years old, most have done 40,000 miles-plus and asking prices are usually north of £1800. Having said that, you’ll often find that older Hondas and BMWs survive their years better than other makes. Flip that on its head though and you can find a bargain Yamaha or Suzuki that’s been looked after because typical prices for the majority are lower as they’re usually tattier. If you see what I mean. 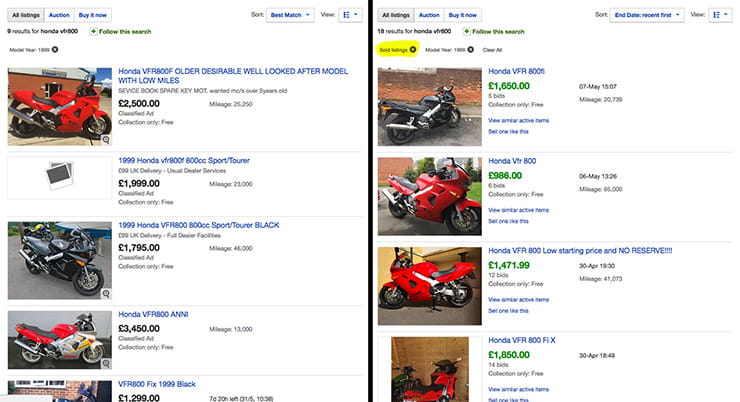 Reality (right) doesn’t always match the hopes of some ads…

Which brings me to the third golden rule – asking prices are worthless in the 2017 bike market. eBay in particular has become a device for encouraging people that their stuff is worth a fortune. But look regularly and you’ll see that most of it never sells. Ignore the buy-it-nows and classified ads, watch the auctions and then you’ll see what the actual value of an item is. With those early VFR800s, it’s closer to £1400. Or use the ‘completed items’ option in the search… all those ones in red didn’t sell.

Now, buying a bike in April used to be the action of a fool. The minute the clocks go forward everyone wants a motorbike. Prices are at their highest and, in the old days, everything sold.

But the new world is different. With so much choice, it can be harder to focus. I was dreaming over VFRs in Wales, Blackbirds in Nuneaton, CBF1000s in Pontefract and FireBlades in Hitchin. They all looked brilliant and such good value, making the local stuff seem dull and expensive.

But I don’t have the time to go to Wales, and Scottie’s rule is right – most will be disappointing. Plus, it doesn’t take much of a look at the adverts to realise how many part-time traders are taking the P. I don’t mind buying from a dealer, but I like them to be honest about it and not pretend to be otherwise. Look carefully at the photos (missing bar-end weights, bent levers and tatty chains are my personal warning lights), read between the lines on the descriptions and you can dismiss more than half of the cheap bikes for the over-priced chancers that they are. Check out the seller’s other items and ratings history too. I was all set to view a well-priced Honda CBF1000 until I noticed that the seller was also flogging bits of broken cars, second-hand crash helmets and paving slabs. Nothing wrong with that (apart from the helmets), but it didn’t tally with what his advert was trying to say about this loved-and-pampered machine. The flip-side of that was a back-street dealer in Wales who only sold one item at a time, but checking his history suggested he was a genuine good-guy, selling decent bikes at reasonable money.

So, I sat tight and waited. After nearly three weeks I’d looked at hundreds of adverts but not been to see one actual motorcycle.

And then I saw it. A 2002 Yamaha Fazer 1000, reasonable mileage, three owners in 15 years, the last had had it since 2010 and lived 10 miles from my house. A long list of service items done including fork seals and fork oil. The thing that got my interest was that it had just had a genuine Yamaha chain kit fitted. OE chains cost twice as much as pattern parts, don’t have a split link and need the swing arm removing to fit. This is serious maintenance on a bike advertised for just £1800.

A quick call revealed that the lady owner’s husband was a recently-retired bike mechanic and the list of stuff she told me that it’d had done convinced me this one was worth a look.

On arrival it turned out that I knew the owner (we worked at the same firm for a few years) and I’d seen and admired the bike regularly in the car park.

And, embarrassingly, for someone who’s bought this many bikes, written dozens of features about buying a used bike and enjoys haggling, I couldn’t find a single haggle-able fault with it. Not one.

Which was awkward, because now I was in love, and I had a total budget of £1800 that had to include taxing and insuring it. I won’t tell what the price we agreed was, but thankfully, I got it and am already head-over heels in love.

VFRs? You can keep em.

Read Steve's apology to Yamaha over his first impressions here... 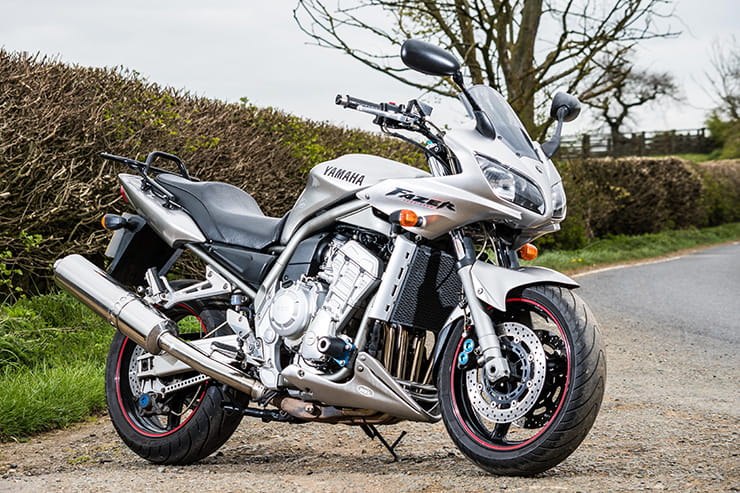