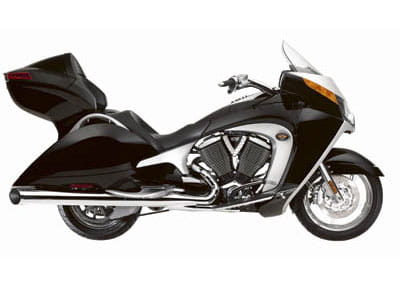 Victory is an American company and a relative newcomer in the motorcycle world. Even so, it’s made its mark very quickly from producing modern custom bikes that are viable alternatives from grand master Harley-Davidson. It was only a matter of time before Victory introduced a proper touring machine but nobody expected such a friendly monster in the form of the Vision.

As a touring machine, whereby soaking up the world’s offerings at a leisurely pace is paramount, the Vision is right up there with the likes of Honda’s Goldwing… it’s at this point Harley’s custom tourers would get a mention, but the truth is the Vision is much better.

The air/oil-cooled 50° V-twin engine is a 1731cc lump of pure torque and easily capable of lugging rider and pillion with assorted luggage, not forgetting its own 368kg (dry weight, gulp!) up and down dale all day long. Not at speed, mind you. The Victory is good for around 110mph but that’s pushing it. So is 100mph but it will stick to it at the expense of petrol being thirstily quaffed by the exemplary fuel injection and big dual cylinders. 75-85mph is where the Vision rules and rules well…

Considering the sheer bloody size and scale of the Vision it rides really, really well. The futuristic styling actually works at keeping the rider free of wind, rain and road spray, while the relaxed riding position is simply that. The pillion also gets the comfort of a five-star hand-made bed. You do need to exercise caution when coming to a stop or pulling away because of the amount of weight to be placed through one then two legs, but easy clutch operation and accessible engine torque make town work a darn sight easier.

Braking isn’t eyeball-popping but nor is it as weak as a Harley equivalent. Four fingers on the front brake lever are a must, especially if braking in a hurry, but it’s not like the Vision is going to be used to set lap records so it and the ABS system are acceptable. Helping to keep the ride together with so much weight onboard are a decent sprung set of front forks and rear suspension that needs topping up with air pressure to maintain an even keel with weight onboard.

As a first time effort, Victory must be applauded at making the Vision wholly usable and likeable. It’s loaded with electronic goodies, as you’d expect from a premium touring machine, and a parking-only reverse gear. Try one for size…

- points – weight is an issue for short-legged owners. Service intervals are very short (were 2600 miles) and may interfere with holiday plans