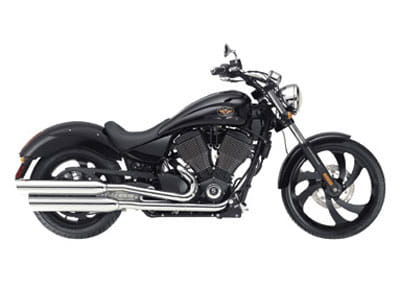 Think American cruiser bikes and all thoughts turn to Harley-Davidson. But then someone somewhere will say ‘what about Victory?’ Cue turned heads with unknowing expressions. The simple fact is Victory has been producing cool custom cruiser bikes with typical and traditional air-cooled v-twin engines since 1998. And in the space of 15 years has earned a reputation for reliability, introducing modern components to old school custom bikes and adding a bit of excitement to the way their machines perform.

One such bike is the Vegas 8-Ball. A tried and tested bike that originally came with a 92ci (cubic inch, or 1510cc) five-speed engine but in 2006 got several important upgrades to make it one of the best, most affordable and fun bikes in the Victory range. Part of the upgrade package was a new 100ci (1634cc) engine and this is where the ‘fun’ part of 8-Ball ownership comes from.

It only has five gear ratios but each one is partnered with a solid wall of 105ft lbs of torque. You can imagine, then, that the 8-Ball isn’t short of get up and go and is usually gone when an equivalent Harley has got out of first cog. The extreme level of torque isn’t as daunting as you’d think – Victory has got throttle control and injected fuel delivery sorted so you only get back what throttle input you put in; twist it slowly and move forward slowly; twist it fast and you’ll be going.. well, fast.

Keeping this torque monster under control is a modern tubular chassis consisting of nothing more than decent components. Suspension is expertly set up for a comfortable ride while retaining feel for what is happening – not easy on a chunky custom. While there is only one disc brake up front it’s acceptable given that the 8-ball doesn’t carry as much weight as you’d figure most custom cruisers have. Let’s not forget there’s a rear brake that is equally effective – go for big back end slides if the need to look a plonker arises. And ground clearance is surprisingly more than you think before pegs start carving Victory signatures in tarmac. High bars aren’t to everyone’s taste but lower replacement items abound so it’s not a problem especially to shorter riders.

Victory is a good name for a brand of bikes especially if that company’s range of bikes can take on the best and win, which the 8-Ball does in an impressive way.