Say the word “Magnum” to the average British motorcyclist, and — unless they think you’re talking about ice-cream — they’re likely to be reminded of the Harris Magnums, the series of mighty Hertford built, Japanese-engined specials that were among the fastest and best bikes of the Seventies and Eighties.

Things are very different across the Atlantic, where if a magnum is not a type of gun it’s a long-running TV detective show from the Eighties. And where the most popular type of modified motorbike isn’t a Z1000 powered cafe-racer, it’s a big-inch V-twin bagger with a large-diameter front wheel, a low seat and a spectacular paint scheme.

A bike, in fact, rather like Victory’s latest V-twin; the Magnum, whose arrival gives the name a distinctly different two-wheeled image. This Magnum looks special but it’s a standard production bike — a tweaked and blinged-up version of the Cross Country, Victory’s most popular model. 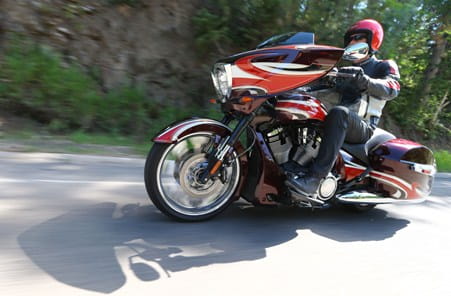 The basic shape and design of the Cross Country are retained, including its stubby screen above a broad handlebar fairing, which is cut away to reveal the 1731cc, air/oilcooled V-twin engine. But the upside-down front forks are revised to carry a front wheel whose diameter is increased from 18 to 21 inches, and suspension at both ends is modified to let the Magnum sit a couple of centimetres lower.

You can’t miss the Magnum’s new paintwork, which comes in four varieties of three-colour schemes, and also differs from the Country’s paint by extending to the fairing internals around the white-faced analogue instruments. The fairing holds a new LED headlight and hides an uprated sound system, now with a total of six speakers giving 100W of power. As well as using the radio you can connect to a phone or USB stick via a socket in one of the unchanged panniers. 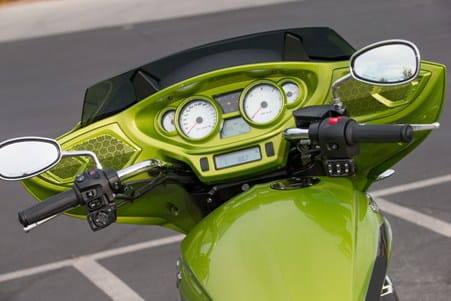 Other new features include the front fender and a reshaped, heavily stepped seat that is just 654mm off the ground. That makes it easy for even short riders to get both boots on the deck, and means that although the screen is short it gives surprisingly good protection, in conjunction with the wide fairing, though inevitably much of the sound system’s output is lost to the wind at speed. 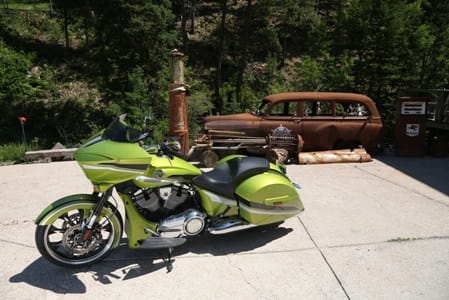 The Magnum’s capable of a fair turn of speed, too, even though the 50-degree Freedom 106 V-twin engine is a few years old and slightly down on power against more recent rivals, making approximately 95bhp with a broad spread of torque. On the launch in South Dakota the Victory was fun and respectably quick as it pulled crisply from 2000rpm and revved through the fairly efficient six-speed box. On a short stretch of freeway it loped along at 80mph with only 3000rpm on the clock, feeling smooth and relaxed, and with cruise control to help when required.

Handling was very similar to that of the Cross Country that we had along for comparison. That surprised me although Victory have tweaked the chassis to suit the bigger front wheel and lower rear, and rake and trail are officially unchanged. Slightly firmer dual-rate springs give less travel at each end, with only 90mm at the rear, but on fairly smooth roads the ride quality was perfectly adequate, with comfort helped by the seat’s back support. 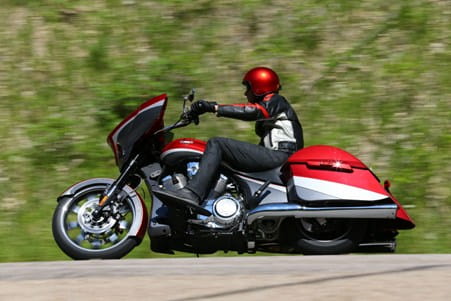 Braking was reassuringly good, thanks mainly to twin, ABS-equipped front discs and four-piston calipers, and the Magnum even had a reasonable amount of ground clearance for a cruiser, despite its lowered look. With its weather protection and panniers it would make a reasonably versatile bike, although the latter are too narrow for even an open-face helmet.

Victory’s bagger certainly matches its spectacular look with respectable all-round performance, and with the aid of its footboards (and optional top-box) it should make a decent tourer too. It will inevitably cost more than the Cross Country, which starts at £16,495, but it’s a versatile bike with a touch of custom style, and looks set to give the Magnum name a new lease of life. 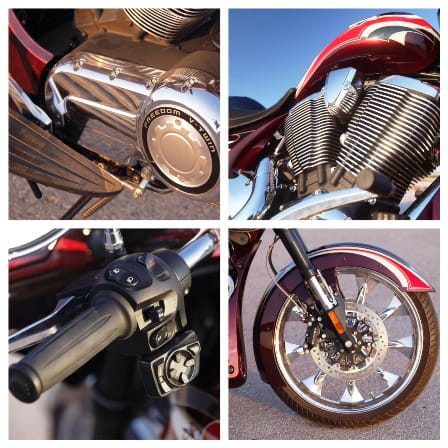