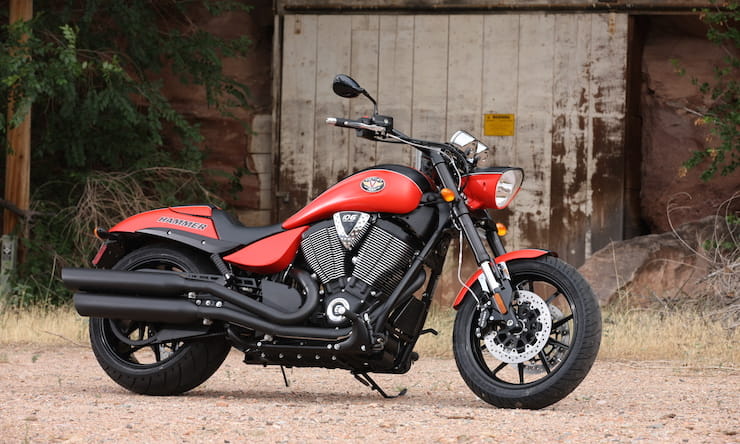 Why you want it:
When parent company Polaris shut Victory’s doors this year, it was a decision met with a degree of sadness. True, the company could now focus its attention on the far more popular Indian brand, but since bikes carrying the Victory name first started to be built in 1998 the brand has won many friends.

Initially designed to be compete with Harley-Davidson, Victory’s machines were a refreshing alternative to the pretty traditional Harleys. Where the Harley models of the late 1990s and early 2000s did tend to feel a little lacking in both performance and technology, this was never an accusation leveled at Victory. In fact, the most common phrase used when riders first sampled Victory models was ‘it’s like a Harley that works!’ And that was the key to their success – these were great looking cruisers that actually stopped, cornered and accelerated. And they did it all surprisingly well.

Not afraid to use modern technology, Victory’s bikes carried inverted forks while the motor had fuel injection and lashings of power. Give a Victory a big handful of gas and they have a very surprising turn of pace while the engine itself is far smoother and more modern feeling than a lumpy Harley of the same era. Show a Victory a set of bends and while they are still cruisers at heart, and therefore lacking ground clearance and are quite heavy and long, they are still pretty competent and fun to ride on roads that aren’t dead straight. And they stop quickly too, which isn’t something rival Harley ever really manage to achieve! So why didn’t Victory succeed?

The truth of the matter is that while Victory models look stunning, and they are real head turners, especially in the later lurid paint schemes, they were aimed at modern riders and this market isn’t as big as the traditional cruiser one. Performance cruisers need younger riders who have a spare £14,000 in their pocket, and this is a far more limited target audience than the traditional Harley or Indian stomping ground. That said, if you want a performance cruiser that goes as good as it look, try out a used Hammer, or any Victory model for that matter, as they are fantastic machines.

What to look for:
Despite being built for the showy cruiser market, the finish on the Hammer isn’t great. The depth of paint and chrome aren’t the issue, both are extremely high quality, it’s the fixtures and fittings that let the side down. Any plated nuts and bolts lose their shine really quickly and this lets the side down on a machine that is such a head turner. There is nothing you can do aside from apply an anti-corrosion spray liberally, but it is a frustration. The paint is also known to flake off the engine, which again is annoying but won’t harm the bike’s reliability. Owners do grumble that the drive belt is quite a pricey item to replace, but it generally lasts over 30,000 miles so this isn’t a big drama, and early bikes suffered a few reg/rec issues. Again, this is a cheap fix. On the whole, there isn’t a huge amount to be wary of and a bike with a full service history is a pretty safe bet. When it comes to extras, race exhausts and a free flowing air filter is worth paying a few quid more for as it unleashed a bit more poke.

Any updates?
The Hammer was launched in 2005 in America and made its way over to the UK at the end of the year. The bike initially came with the 100 cubic inch engine, but this was replaced in 2010 for the more reliable Freedom 106 motor with its 106 cubic inch capacity. Both engines feature a 6-speed gearbox. The Hammer was sold in two models, the standard bike and the S, with the S having blacked out features such as the cylinder heads instead of the stock model’s chrome to make it appear sportier. There have been a few wheel designs over the years, but generally the bikes have remained unchanged. If you don’t like the Hammer’s styling, the Vegas 8-Ball, Boardwalk, High-Ball and Jackpot are essentially the same chassis and engine platform, but with altered looks, bars and attitude.

What to pay:
The Hammer was one of the more popular Victory models in the UK, however that doesn’t mean there are a great number of them for sale as they were quite a niche market. Getting hold of an early 100-motor bike is tricky, but if you can locate one they go for in the region of £5000. The later 106-motor bikes are more common and you generally need to expect to pay about £7-8000 for a 2010 bike with 2012 area models costing closer to £9000 and the latest 2015 bikes over £10,000. This may sound a lot, but the Hammer S retailed at £13,995 and Victory models are quite sought after by their dedicated fans, which helps them hold onto their residual values.

www.hbcmotorcycles.co.uk - A long time Victory dealership, HBC often have a good supply of used models in stock and are very knowledgeable about the brand.

www.krazyhorse.co.uk - The guys at Krazy Horse are also a recognized Victory dealership, but more importantly the shop and café is a very cool place to simply visit for a look around.