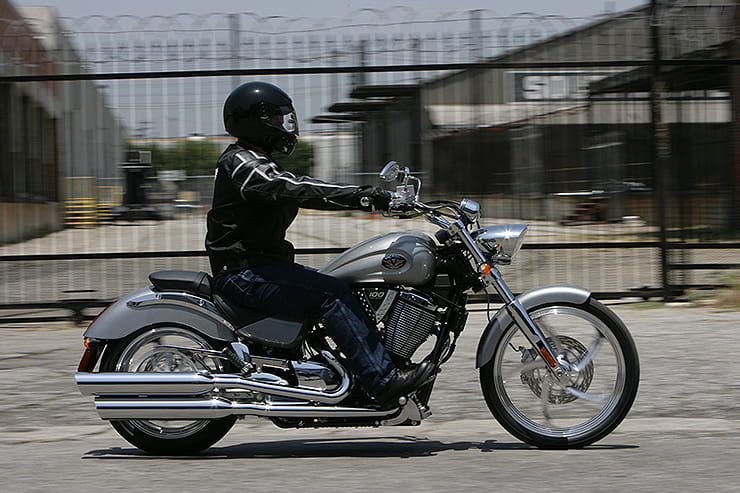 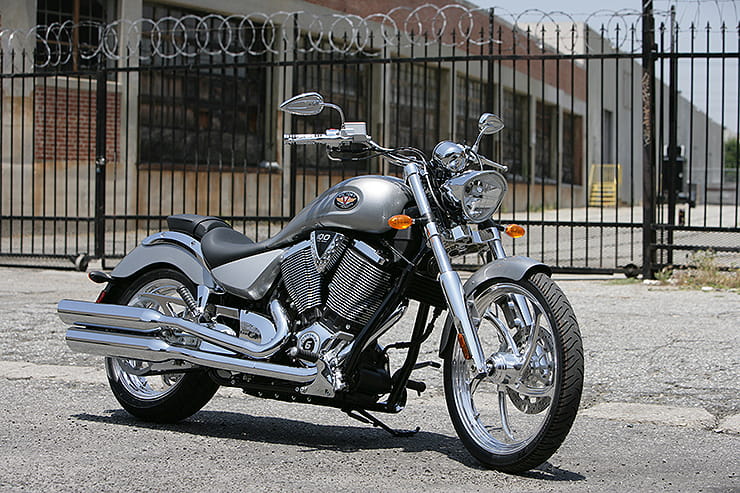 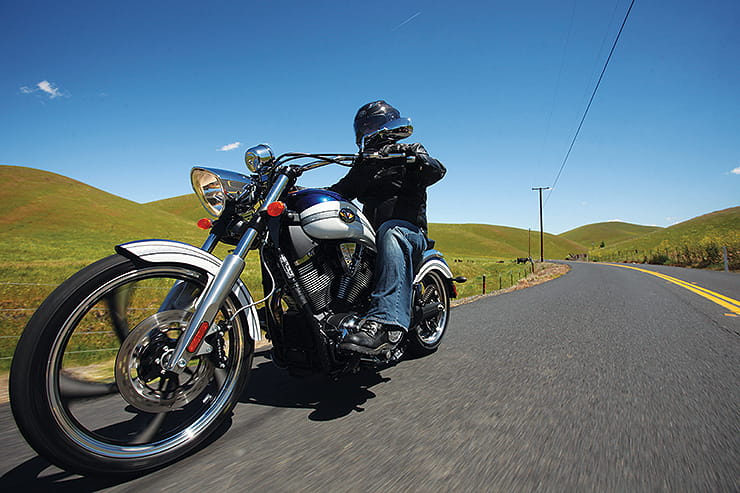 Victory Motorcycles was a company that deserved to succeed but, in the end, failed, which is a great shame. First opening its doors in 1997, Victory was owned by Polaris Industries (who are better known for snowmobiles and off-road four-wheelers) and was set up as a direct rival to Harley-Davidson. Also American-based, Victory took a different path to Harley and always aimed their bikes at a younger, more radical customer who put performance at the forefront of their shopping list as much as style. Great-looking and fast, Victory bikes were a reasonable success story but in 2017 as sales stagnated, Polaris decided to pull the plug on the operation and instead put their focus on a new two-wheeled brand – Indian Motorcycles, which they bought in 2011. With Indian having the heritage that Victory lacked, this was probably the right move but for fans of these unique cruisers, it remains a shame that the company was wound up. If you want a stand-out performance cruiser, Victory’s offerings remain right up there and always turn heads in any carpark.

Victory’s bikes were never cheap and cost anything from £8995 to £17,495 depending on the model. The Vegas was generally nearer the bottom end of this scale and could be found for £9696, however its price tag altered depending on the model as there were a fair few Vegas-based variants such as the 8-Ball, Jackpot, Z-Ness etc. Nowadays you need to look at paying around £8000 for a tidy Vegas with variants upping this to closer to £9000-£10,000 as they have flash paint and extras. Occasionally a cheaper one will pop up in classifieds but this has generally covered over 10,000 miles, which is pretty rare for a cruiser and to be honest is best avoided as the finish will probably have suffered.

As you would expect from a big, air-cooled V-twin, the Vegas is hardly left lacking in grunt! A motor that really gives the impression that there are lots of big bits of metal pulsing up and down, it’s not a very smooth or refined engine and instead drives forward with big thumping amounts of torque. Victory, like so many cruiser manufacturers, tended to shy away from performance figures but roughly 89bhp and 110ft.lb of torque seems about right and you seldom find yourself wishing for any more.

The Vegas is powered by Victory’s ‘Freedom’ engine, which is an air-cooled 50-degree V-twin with single overhead cams and a four-valve head. Initially launched in 100 form, with the 100 relating to its capacity in inches, this was upgraded in 2010 to the 106 engine. If you don’t speak imperial, 100 is 1634cc with 106 equating to 1740cc. The later engine is better performing, a touch more reliable and a bit more refined but there isn’t a huge amount to split them. And they both have fairly horrible and clunky gearboxes, although the 100 only has five gears where the 106 comes with six, which makes a difference if you want to cover distances, not that you will on a Vegas...

A lot (most...) owners fit a Stage 1 kit to the Vegas, which consists of a fruity exhaust, performance air filter and ECU re-map and it is worth every penny and is definitely something to look out for on a used bike. Cleaning up the throttle response and also adding a chunk of mid-range, it makes the thumping motor even more engaging.

When buying used the actual engine is solid but there are a few things to be wary of. The drive belt lasts roughly 30,000 miles however this can be shortened by damage, so always check it looks ok as replacing it is expensive and time-consuming. The motor has hydraulic tappets so there are no valve-clearances to worry about and requires servicing every 5000 miles, which isn’t too expensive due to its exposed nature – although Victory specialists are becoming rarer and rarer. A few early bikes suffer reg/rec issues and batteries can also be a weak point but neither is a huge concern as the reg/rec is a simple plug-and-play unit. Always check the oil cooler on the front of the motor as it is quite exposed and damage through stones being flung up from the front wheel isn’t uncommon. 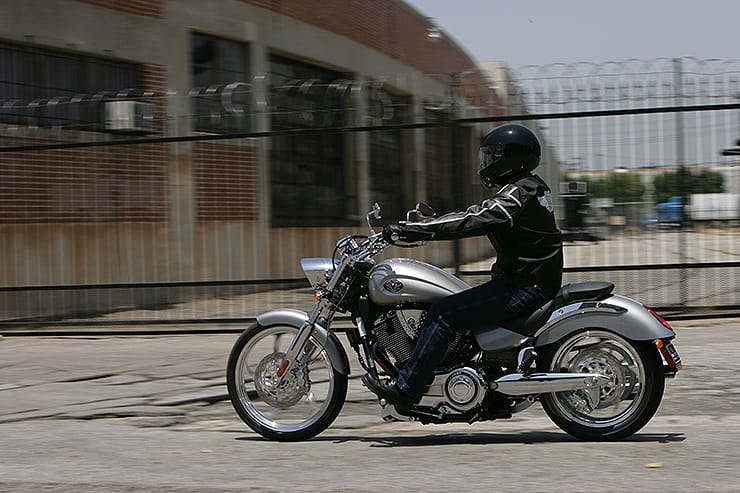 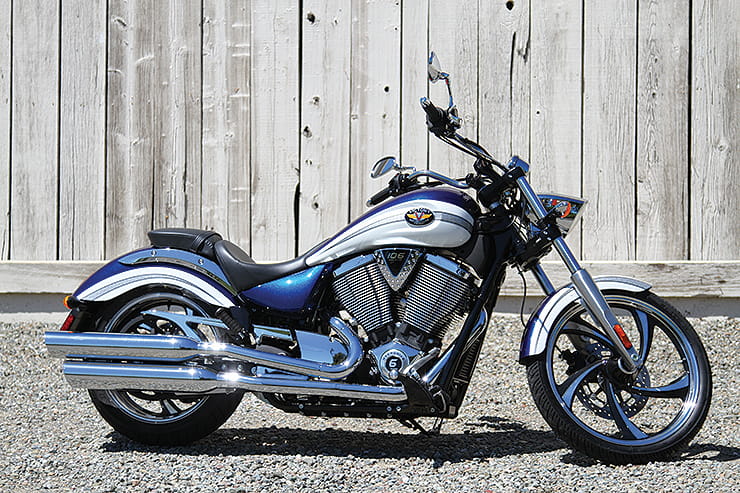 Fuel prices aren’t such a concern in America and the Vegas can be a bit thirsty. Figures in the low 30mpg range aren’t uncommon but the exposed nature of the Vegas means that owners tend not to ride until the tank runs dry.

The Vegas has always run a skinny 21-inch front wheel with an 18-inch rear, which when combined with its rather long 2462mm wheelbase means that this is a bike mainly aimed at straight line riding. You can fire it at bends but a lack of ground clearance and the huge wheelbase means it is far happier just taking it easy instead. Well, unless you gun it off the line at a set of traffic lights, which is when it is anything but relaxed!

Cruisers are more about the attitude of the ride rather than the actual quality and you have to say that the Vegas nails this brief. As well as sounding awesome, the look is beautifully uncluttered from the seat and there is a real attention to detail with everything nice and neatly positioned and the instruments not too intrusively placed. Some riders dislike the forward-mounted pegs and swap them for more mid-mounted items, which is a matter of personal taste, but other than that it is what it is. And when you are on the go the hefty 298kg (dry!!!) weight isn’t too much of a handful as the seat height is very low. Although there are a few issues when buying used to be wary of...

Owners grumble about the quality of the fixtures and fittings on the Vegas and it is true, corrosion is hard to keep at bay, which is a real shame. Keep a close eye on any plated areas and always apply anti-corrosion spray liberally.

The single front disc has a four-piston caliper, which is good news, and to be honest that’s all it needs. As the Vegas lacks ABS the skinny front tyre is quite quickly overwhelmed by the brake (especially in the wet) and so caution is advised. Owners use the rear just as much as the front, which is the safest way to ride the Vegas. 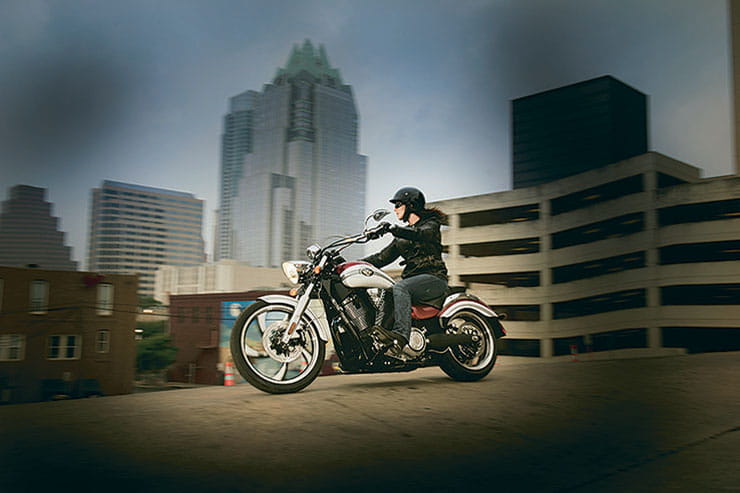 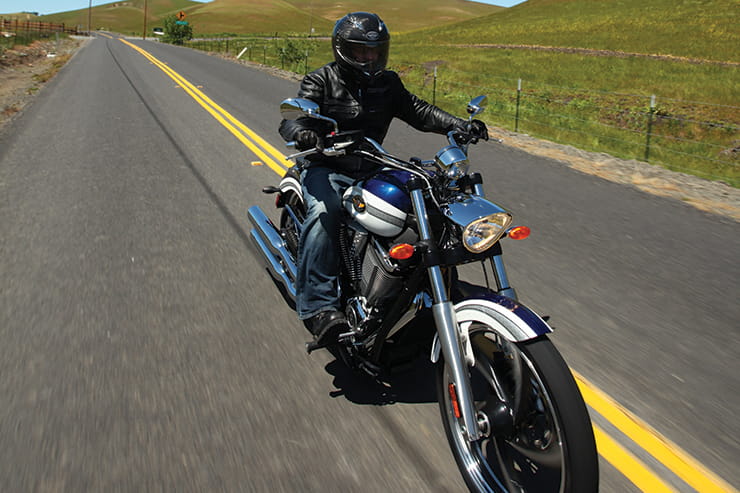 You don’t really want to go touring on a Vegas, this is a bike for sunny cruising and with this in mind its lack of wind protection and firm seat aren’t such a worry. If you want to cover miles, there are other Victory models such as the Cross Country that are far more suited to this role. Save the Vegas for what it does best – posing!

Nope, you get no rider assists with the Vegas and aside from ABS (which would be nice) you don’t want them. Keep it raw and analogue.

In terms of accessories, the Stage 1 kit is popular, a few owners go for Stage 2 (new cams) but in the UK this kit is rare. A great addition is a cover to protect the oil cooler and then you are down to bling and bolt-ons. Panniers aren’t uncommon (always check behind them for corrosion) and pillions will appreciate a back rest. One or two riders fit screens, but they ruin the look of the bike! If you really want to go down the accessories route, get onto one of the many America sites for inspiration and expect to have to get items shipped over as the UK scene is considerably more limited. Or search out one of the less common models such as the 8-Ball, Jackpot or Z-Ness.

The Vegas isn’t a cheap bike to buy but it is a unique machine that you won’t see parked up at many bike meets. Reliability isn’t an issue and aside from a few bits of corrosion, generally they aren’t to be feared in the used market. It’s a shame the price tag remains quite high but there again, you are buying a lot of metal! And metal that is actually built in America, which isn’t the case for all ‘American dream’ bikes...

Three things we love about the Vegas… 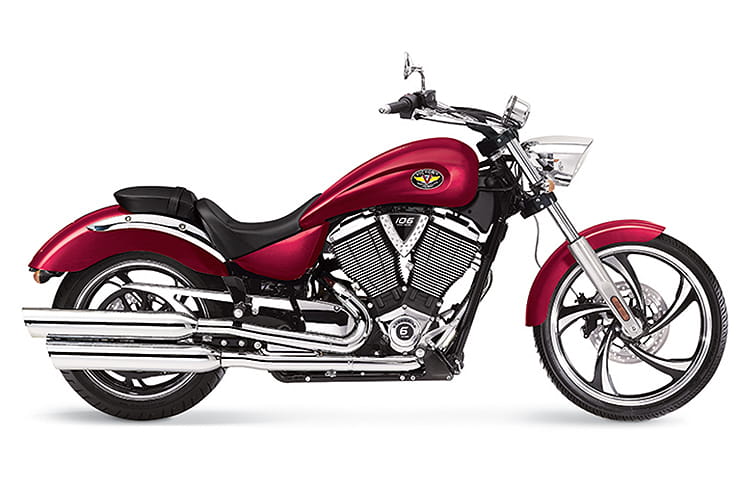 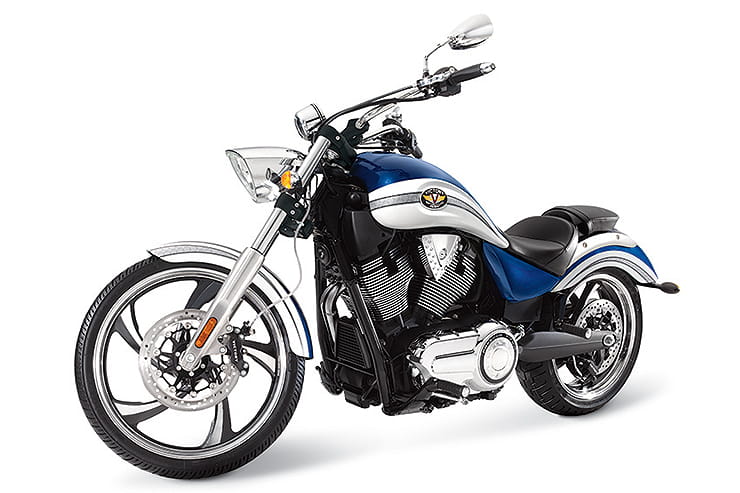