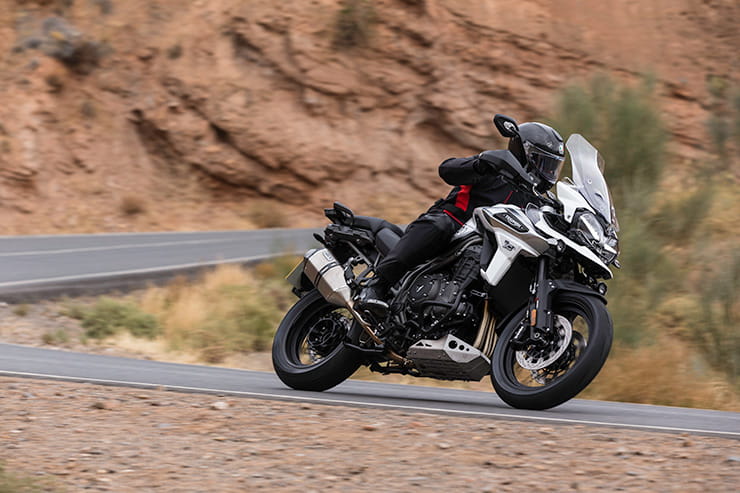 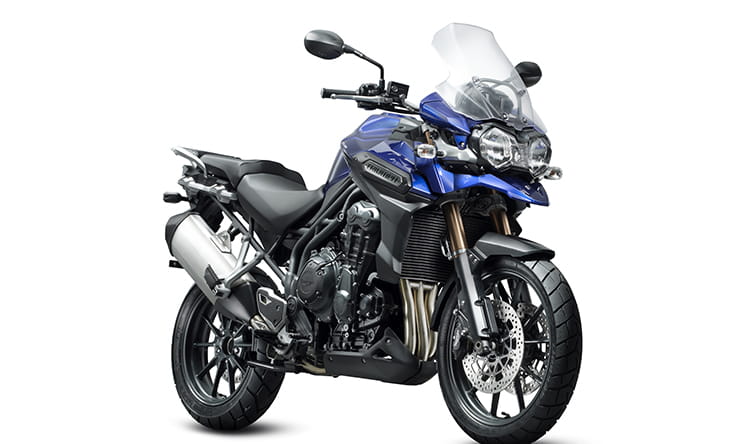 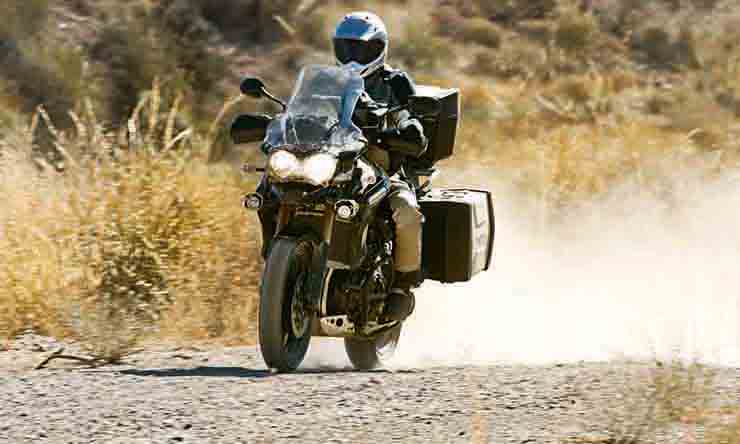 In 2012 Triumph released one of their bravest models to date and in doing so went head-to-head with the established class leader, the all-dominating BMW R1200GS. The Triumph Tiger Explorer took the fight directly to BMW through an all-new large capacity water-cooled triple that was designed to feature everything the BMW lacked (which at the time included water-cooling and a ride-by-wire throttle!). While initially the public were positive, it only took a year until BMW launched the heavily-updated water-cooled R1200GS, somewhat taking the shine off the Triumph and firmly reestablishing the BMW as the class leader. However for those whose adventure riding doesn’t involve any off-road, the Tiger Explorer is a very refined-feeling adventure bike with a reasonable price tag in the used market. 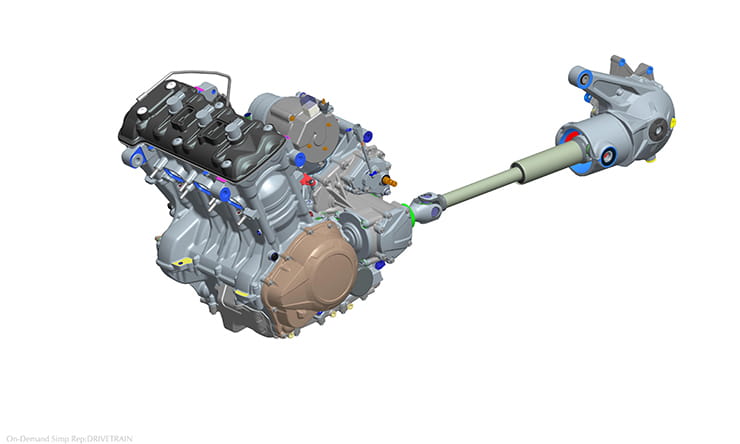 Featuring an all-new 1215cc triple motor, Triumph opted for power and performance over weight when it came to their new power plant. Water-cooled and featuring a ride-by-wire throttle, the triple produces a claimed 135bhp with 89.3lbft of torque and has an I-shaped balancer shaft (I-shaped to reduce weight) to ensure everything is nice and refined. Running a hydraulic clutch and a back-torque limiter to eliminate the chances of damage to the sprag-clutch when the bike is started, the Explorer has impressively long service intervals of 10,000-miles with the valve-clearances at 20,000-miles. Tagged onto the back of the motor is a ‘piggy back’ generator with a 950W output which sits behind the cylinders and runs off a sprocket behind the clutch. To keep power constant and stop surges at tickover, the generator has an overrun decoupler which keeps the generator running at a constant speed. 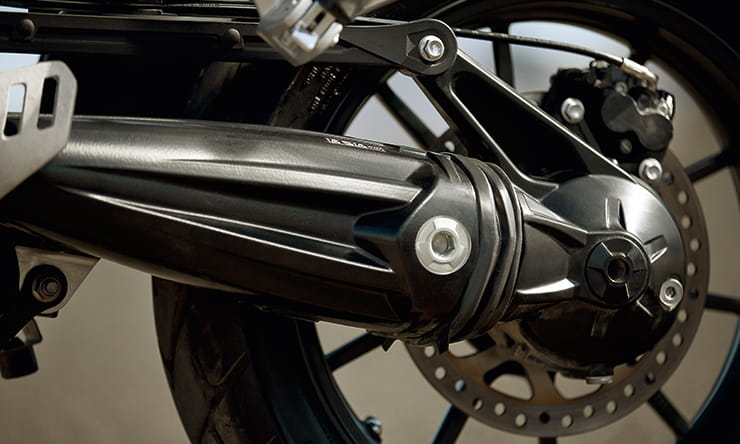 Triumph stuck with what they knew when it came to the Tiger’s chassis and to keep a ‘family’ similarity with other Triumph models the Explorer features a tubular steel trellis chassis. As big adventure bike riders expect a shaft drive, the Tiger has one and it even has a torsional damper built into the engine end of the unit to take out jolts while a metalastic shaft (effectively a rubber joint where the front and back drive shafts meet) is also incorporated. Unlike later models, the original Tiger came with cast wheels and not spoke ones, a further hint at its on-road focus, and a reasonably large 20-litre tank.

Featuring beefy 46mm fully-adjustable inverted Kayaba forks at the front and a Kayaba monoshock with adjustable preload and rebound damping at the rear, the Tiger’s suspension was right up there with what was expected in 2012. However, sadly for Triumph, a year later BMW introduced semi-active suspension to the GS, instantly making the Tiger seem outdated. Triumph responded by adding this as an option on its higher spec models in 2016. 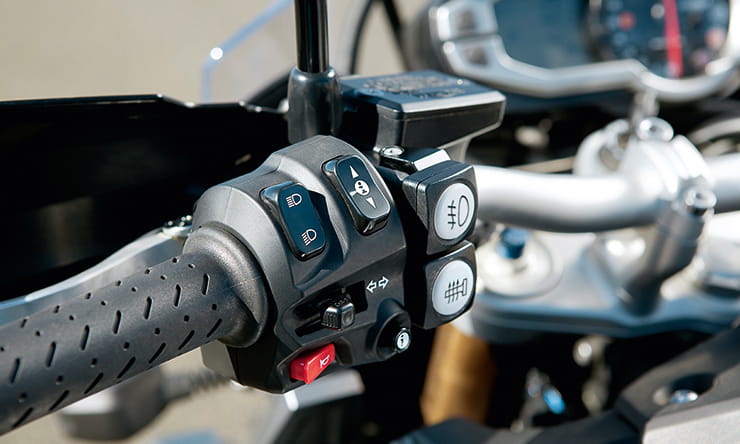 Triumph armed the Tiger with just about every gizmo it could and its ride-by-wire throttle (Triumph’s first ever) has no physical cables to operate it, meaning less wear. Cruise control, two-stage traction control, ABS (which can be switched on and off), self-canceling indicators, 12v power sockets, the Tiger has it all. Well, everything riders expected in 2012 before IMUs were common place and everything had to be angle-sensitive…

Although the Tiger’s tank tends to splay the rider’s legs wide, Triumph were clever to give the Explorer an adjustable riding position with the seat height varying between 840 and 860mm and the screen and bars also variable in their height. It’s a very comfortable bike over distance, but like all adventure bikes when fully loaded it can be quite heavy at low speed. And at a claimed 259kg when its 20-litre tank is brimmed, that’s a lot of bulk to control.

The Explorer is a brilliant pillion bike with a roomy seating position and grab rails on either side of the bike. If you stick on a top box to lean against, it’s ideal for covering huge mileage two-up. 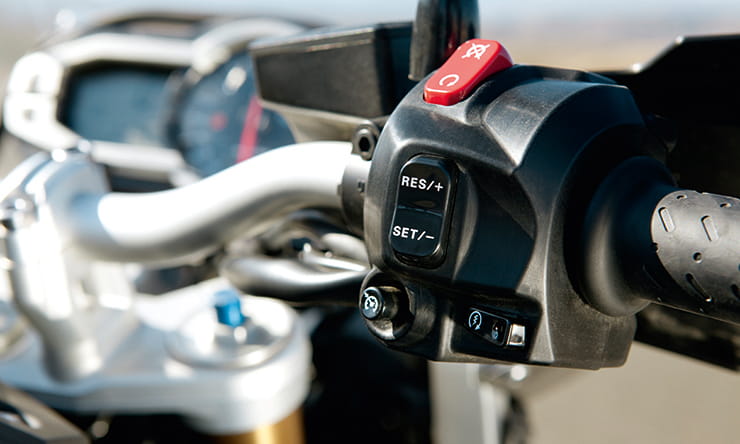 The new 1215cc triple-cylinder is typical Triumph in the way it balances low rpm drive with a superb 89ft lbs of torque and a heady 135bhp. If the fact the Explorer can ride in any situation with ease – including pillion and 95-litres of optional pannier and topbox carrying capacity – doesn’t delight you, then rubbishing Euro motorway limits most certainly will.
Triumph has mastered, in a short time, the relationship between engine, gearbox and Cardan shaft for the final drive. Absolutely no complaints whatsoever about this set-up when ridden on the road and, by all accounts, (to date we’ve ventured no further than a gravel drive) it’s similarly fault-free off-road.
Triumph’s new ride-by-wire throttle system is integral to the onboard computer that oversees the standard fitment of traction control, ABS and cruise control – all deemed necessary to compete in such a populated class and all work precisely and as smoothly you’d expect from a bike that has had an extreme level of development.
The best part is all the trip info and other electronic aids (air temp, fuel system, optional tyre pressure monitor etc) are controlled by simple bar-mounted switchgear and read via a clear LCD screen.
The Explorer’s ergonomics also get high marks with height adjustable screen and adjustable handlebar position. The actual thought of climbing onboard such a tall bike (840mm seat height at its lowest setting) is galling, but with the bars set close to this 5ft 7in rider and the seat height on the minimum 837mm, (optional low seat is available) everything from comfort to forward view is rosy.
Our first experience with the Explorer showed that Triumph is very much on top of the adventure segment with a bike that is capable of comfort, speed and riding thrills in complete safety. And no doubt it will make for a viable global traveller when tarmac stops and adventures truly begin.
Bennetts Bike Social Review, October 2012.

The Tiger Explorer is no lightweight and that’s its main issue. If you are used to a substantial bike such as a Pan European, and are quite tall, then its weight probably won’t bother you. However if you are short in the leg the Triumph can feel a big, top-heavy, old beast. To some potential owners this is enough to see them reverting to the BMW with its lower centre of gravity, however this weight does bring with it some added benefits.

Once rolling the Explorer is super-stable and feels glued to the road. It exudes the same kind of impression that a Pan does of being on a mission and nothing will stand in its way. It’s comfortable, loaded with extremely clever and useful tech and overall a pretty solid bike with long service intervals. In short, it’s a damn fine road tourer. Pretty terrible off-road, but what do you expect from a bike that weighs just shy of 260kg!

The issue Triumph had with the Explorer was that they based all their design on the older air-cooled GS, so when the water-cooled one arrived and introduced impressive handling and a lightweight feel to the class it instantly felt dated. If you prefer the old-school adventure bike impression of size and stability over agility, the Explorer won’t disappoint – especially when you look at its price tag!

First generation bikes always surer a few teething issues and the Tiger Explorer was no exception. Some dealers cruelly started to refer to the Explorer as ‘the exploder’ due to a spate of early bike suffering substantial engine issues (some had their heads changed), however these machines will have either expired by now or been sorted, so in truth you are unlikely to experience anything too major. If a motor is going to go pop it will generally do so within the first 10,000 miles and most used Tigers have now cleared 20,000. However that’s not to say there aren’t a few gremlins remaining out there…

The biggest issue with the Explorer is simply down to build quality, which is a real shame on such a premium model. If you buy the XC with its spoke wheels, inspect the hubs and spokes very carefully for rust as they are extremely prone to this, and on both bikes be very wary of seized suspension linkages, a frustratingly common Triumph complaint. There have also been a few recalls/updates, one for a sidestand bolt and one an ECU issue, so ensure these have been completed. The rest of the bike’s issues appear to be individual cases with no real pattern with owners reporting everything from leaking clutch slave cylinders and cracked exhaust down pipes at the weld to corrosion under the engine paint, sensors failing and corroded fasteners. 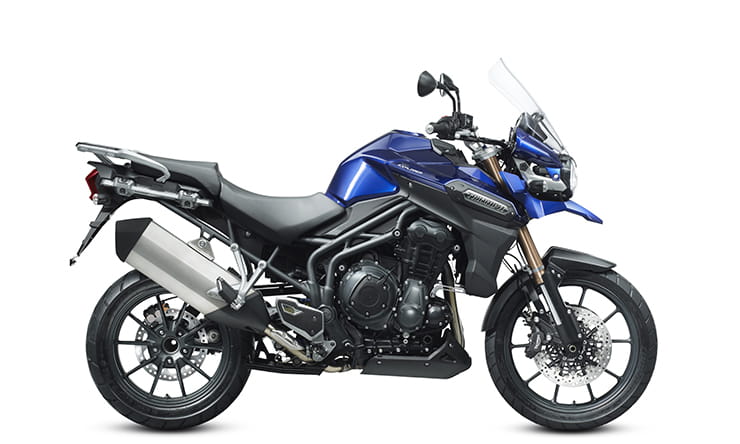 The Tiger Explorer was launched in 2012 (the XC with spoke wheels joined it in 2013) and both received a major technological and performance update in 2016. Alongside a refined ride-by-wire system the triple’s internals were lightened to give it a freer-revving nature as well as Euro4-compliance and 2bhp more power with 2ftlb extra torque, not to mention a 6% boost in mid-range. To confuse matters, the Explorer now arrived in six different versions with three XR road-orientated ones and three XC off-road styled ones. Spoke wheels and off-road crash bars define the XC while the XR gets cast wheels and the spec of the model increases with its price tag. Options depending on spec now include semi-active WP suspension, cornering ABS and traction control and hill-hold control while all models get an electronically adjustable screen. The Tiger Explorer became the Tiger 1200 in 2018 and once again its motor was upgraded internally with a lighter fly wheel and its electronic package revised.