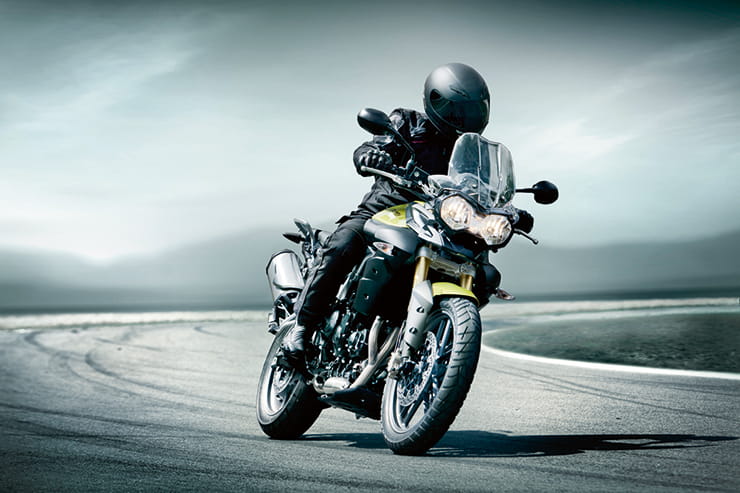 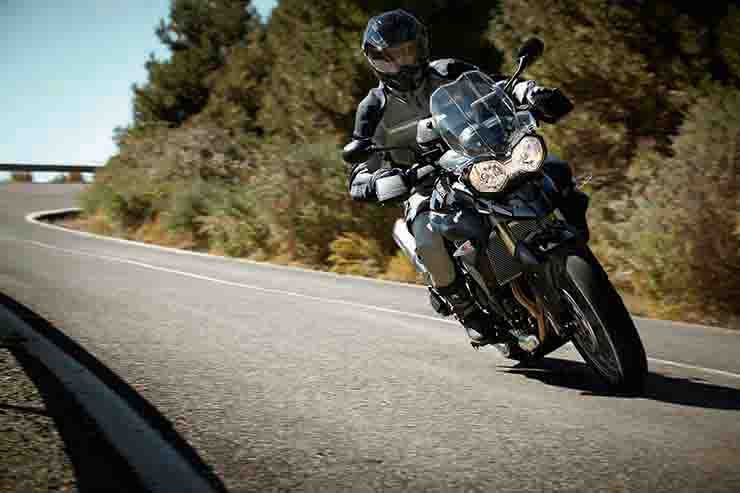 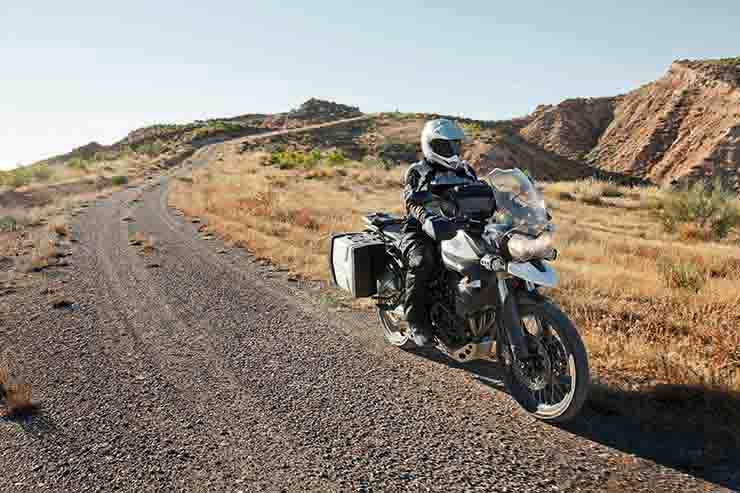 The original generation of Triumph’s middleweight adventure bike may be a bit more basic than the later upgraded 2015-onwards machines, however this actually plays into its hands in the used market. Lacking many of the fussy electronics such as a ride-by-wire throttle or TC whose various sensors can start to develop issues with age, the early bikes make for pleasingly solid and practical do-it-alls that are well worth considering. Comfortable, delivering reasonable economy figures and mechanically sturdy, the early Tiger 800 and its slightly more rugged XC sibling may be getting on a bit now but certainly shouldn’t be avoided in the used market.

When new the basic Tiger 800 cost £7149 with the XC commanding a few quid extra at £7749 due to its higher-spec spoke wheels, longer-travel suspension, and brush guards. However, that wasn’t the end of the story for the Tiger as ABS was an optional extra on both bikes, which added £600 to the price tag if you ticked that box. Nowadays the prices are about the same for both models (and all years) and you can expect to pay around £4500 for a fairly well used example in a dealer (over 25,000 miles) with fresher machines commanding just over £5000. A full luggage set tends to add about £500 to the price tag and is worth looking out for. Very low mileage models change hands for £5500-6000 but they need to have only covered around the 10,000-mile mark to achieve this price.

Powered by a long-stroke version of the 675 triple (which ups its capacity to 800cc) the Tiger 800 has far more mid-range and a lot less of a rev-happy nature than its 675 siblings, which is bang on character for its role in life. It is also the ‘old-style’ of crank configuration, which is smoother and less vibey than the slightly rough T-plane crank the firm now uses on the Tiger 900 models. Producing 94bhp with 58ft.lbs of torque it is interesting to note that even when Triumph added ride-by-wire in 2015 the power and torque figures were virtually unaltered, so realistically the only benefits you are getting on the newer bike in terms of performance come from its electronic gizmos, which not everyone wants. On B-roads the Tiger feels right at home and its mid-range drive is very impressive for a machine of its size while the triple motor also ensures that should you go searching out a bit of fun by upping the revs, it is happy to respond. Adding a pillion into the equation can make it start to feel a bit lacking in drive, but for solo adventuring it provides more than enough performance.

As is so often the way with first generation models, the original Tiger’s motor can feel a touch rough and ready. It isn’t anything to be too worried about, and certainly doesn’t harm its reliability, but the 2011-2014 engine is noticeably more rattly and noisy than the 2015-onwards one, which had its mechanical noises deliberately reduced and the gearbox’s action made slicker in the update – two areas that are often highlighted as weak by owners of the first Tiger 800 model. Are they that much of a worry? To be honest, no. While the gearbox is undeniably a touch clunky it isn’t anything too frustrating (it has never worried Speed Triple owners...) and certainly never misses ratios and the engine’s noisy nature can be chalked down as character. Pleasingly basic thanks to its analogue throttle control system, very little goes wrong with the engine on the early Tiger models (owners of the ride-by-wire model can suffer from hot start problems) so you can buy with a fair degree of confidence. There are a few odd issues such as the rubber chain guard on the swingarm wearing through quickly, which costs just £30 to replace, and the exhaust valve on early bikes can make a weird pinging noise on overrun but generally the Tiger is a sound bet. There have been a few ECU updates, so check these have been completed as the old maps can cause the bike to stall on overrun, but your main worry is service history. The Tiger has 6000-mile intervals but also needs an annual check over, so see what has been done and when. The big financial worry is the 12,000-mile service, which is the valve-clearance check and also the suspension linkages strip and regrease, which if ignored can (and probably will...) lead to big issues down the line. Expect to pay about £600 for this service as it also includes swapping the fuel filter, air filter and plugs. Happily, unlike the older model, due to its basic nature very few original Tiger 800 models suffer from electrical gremlins, however, always check for any warning lights on the dash as the exhaust valve can play up (seize...) and throttle position sensors can deteriorate with age. 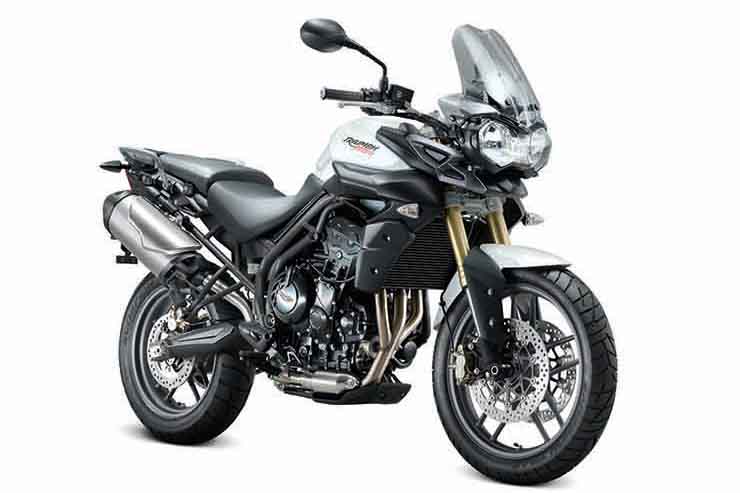 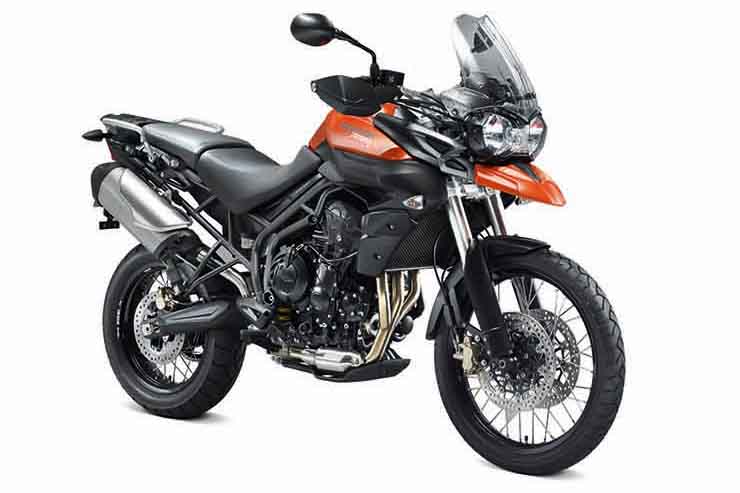 Triumph claimed some very impressive economy figures for the Tiger – 49.6mpg in an urban environment, 75.3mpg at 56mph and 74.5mpg at 75mph – all of which are basically bobbins! The Tiger isn’t bad in terms of economy but expect 55mpg rather than the somewhat optimistic 75mpg that Triumph claim. That still equates to a range of over 200 miles from the 19-litre tank, so is hardly to be criticised. Triumph claimed even better economy for the updated ride-by-wire model but again, that proved somewhat optimistic... It’s a touch more economical but only very slightly.

The basic Tiger model has cast wheels with a 19-inch front (100/90) and 17-inch rear (150/70) where the XC comes with a 21-inch front (90/90) spoked item and the same size rear but in a spoke rather than cast design. On the road this tends to make the XC feel less assured simply down to the reduce amount of rubber on the ground and also the fact the longer-travel suspension (an extra 40mm at the front and rear) adds an element of wobble. Also the 21-inch wheels requires more effort to get it to change direction and alters the bike’s geometry for the worse if you like speedy handling. Overall, this means the basic Tiger model is the better bike for road riders who have no interest in the off-road side of adventuring, although it has to be said the XC does look a bit better. However there is another issue when it comes to the XC and that is seat height, which although adjustable between 845mm and 865mm is 35mm taller than the Tiger 800’s 810mm or 830mm height. Interestingly, some owners fit wider tyres to both Tiger models, something that is claimed to improve front end feel. Always check if the relevant tyre manufacturer recommends the fitment if you explore this route as it can lead to handling and safety issues.

When buying used there are a few areas of concern with the Tiger 800 – bearings, chassis and suspension. Any bike approaching 30,000 miles may well require new head bearings and possibly wheel bearings, so check for play or roughness, while weeping fork seals are also pretty common. The shock should last about 30-40,000 miles, but this is determined by use, so check it well for a lack of damping and also inspect the suspension linkages. A gripe from Tiger owners who do go off-road (there aren’t many) is the fact the pegs are mounted directly to the frame, making the frame itself and not any hangers vulnerable to damage in the event of a spill, so look closely at this area for any repair work as crashes also happen on the road (check its history via a HPI company). It’s unlikely but certainly a consideration.

Irritatingly, neither Tiger model came with a centre stand as standard fitment, however Triumph sold one and it is well worth fitting (there was a recall for its spring) as it makes chain maintenance far easier.

ABS (non-angle-sensitive) was an option on both the stock and XC models, so search this out if you want it and always check the spec of the bike you are buying. If you are into off-road riding, you will be happy to hear it can be deactivated if required on both models. The two-piston sliding calipers are fairly weak in their performance, especially on the road, which is a bit of a shame and aside from a change of pad compound there isn’t much you can do because braided lines come as standard fitment. If they feel particularly poor, rebuilding the calipers only requires a £45 kit and is a simple job for a reasonably competent DIYer. 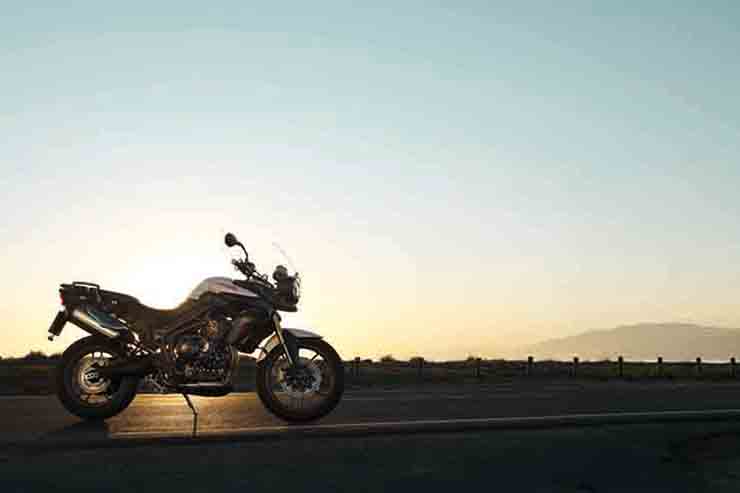 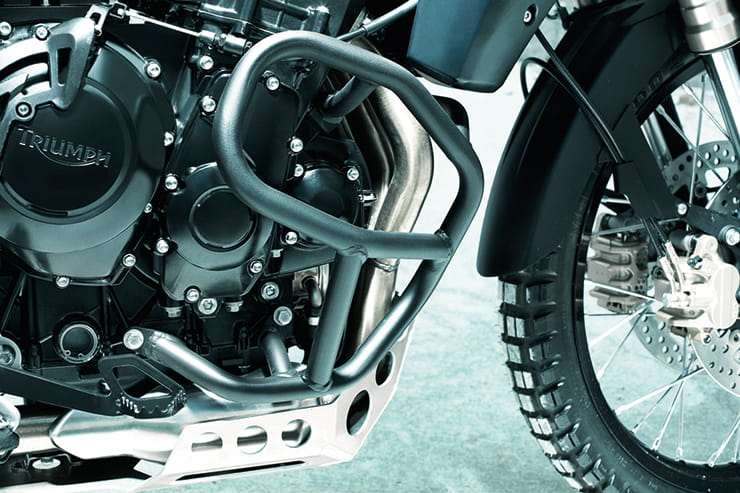 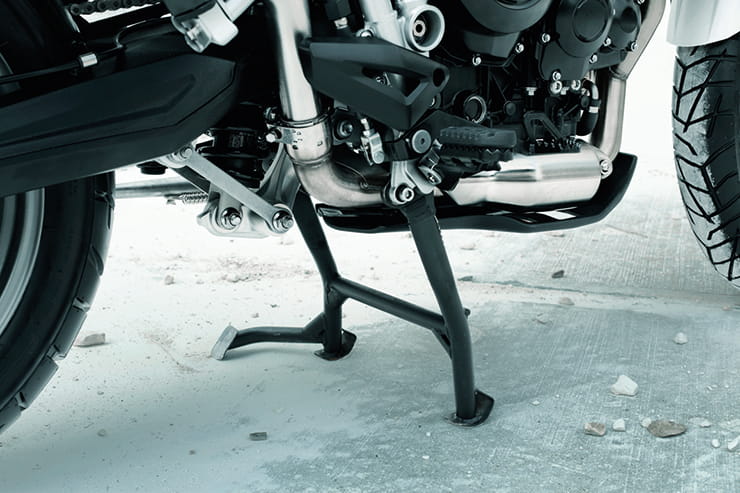 The Tiger makes for a really good touring bike, although this generation does lack things like TC or cruise control as it has a basic electronics system. Physically fairly roomy, taller riders should feel at home on the Triumph and the seat is very comfortable and the bars adjustable in their position, which is great news. The screen is a bit low (some would say terribly low and ineffective) and only the XC gets brush guards as standard, but there are loads of aftermarket firms willing to step in and assist there. When it comes to pillions the Tiger is ok but due to the fact it is only a middleweight it makes a better solo tourer. If you want to go two-up, check out the Tiger 1050, which is excellent.

When it comes to rider assists, you get the option of ABS (which can be deactivated) and that’s it aside from an immobiliser. Triumph fitted the Tiger with a 645W alternator as they knew riders would plug in heated clothing and probably fit heated grips, so you are less likely to overload the system. Good thinking Triumph.

In terms of accessories, hard luggage is a common (soft luggage was also an option sold by Triumph) and good extra and Triumph’s own aluminium panniers and top box are popular alongside heated grips and a taller screen (Triumph sold an adjustable one). A few owners go for aftermarket seats and replacement end cans (Arrow were Triumph’s official supplier) but in general Tigers are left pretty standard with only crash protection and fog lights another common addition (a radiator guard is worth fitting) alongside an auto chain lube system. A few owners go the full off-road hog and fit loads of crash protection but it’s not that necessary unless you plan a lot of green lane or proper adventure riding. Triumph own tyre pressure monitoring system can be fitted to the Tiger.

In many ways the Tiger 800 or Tiger 800 XC are better used buys than the more complex later version of the bike. Due to their basic nature there is less to go wrong and who really needs cruise control anyway? If you want a practical middleweight adventure bike, at £5000 a tidy first generation f Tiger 800 is a really good shout.

Three things we love about the Tiger 800… 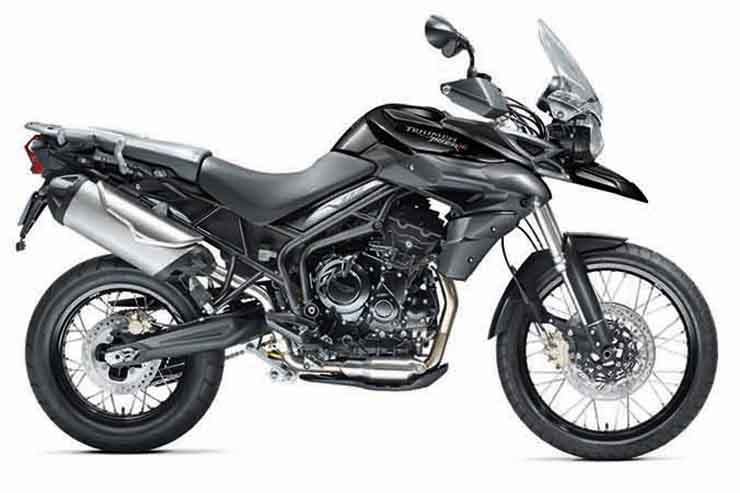 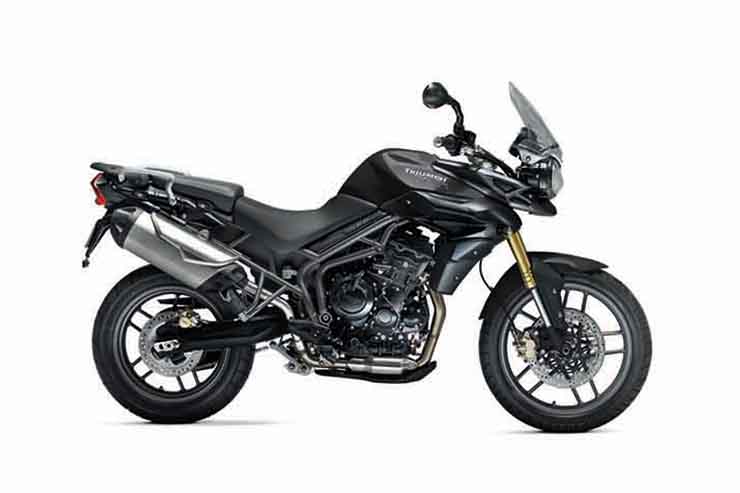 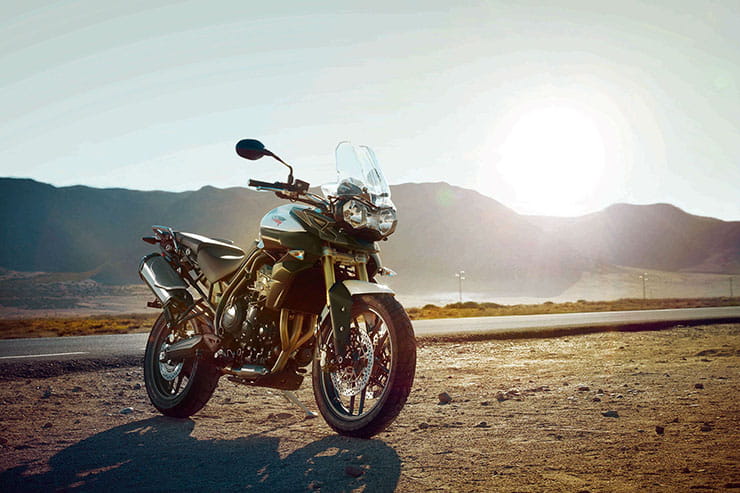