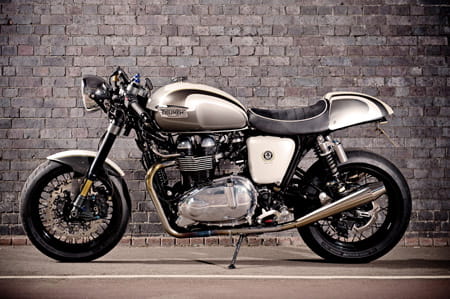 I have a confession to make. I’ve been unfaithful.

Not to my wife, thankfully, but to my second true love; the Triumph Thruxton which takes pride of place in my garage. Even worse, it was with another Thruxton. And I enjoyed every minute of it. Sorry about that.

In my defence, it would have been hard not to, for the bike in question was the 904 Ace Special created by Tony Scott, who runs T3 Racing from a small garage in the wonderfully named Gasoline Alley near Brands Hatch.

The man behind the Triumph Triple Challenge racing series, he first saw a Thruxton at the NEC bike show five years ago, and thought: “That’s stunning, but it could be better.”

Fast forward, then, to the work of art sitting in front of me in the morning sun, with a bespoke hand-painted classic colour scheme, hand-made forks, hubs, shocks and stainless steel exhaust, digital dash and race-bred suspension and brakes, all wrapped around an engine bored out, tuned and married to a quickshifter-assisted gearbox.

The only original bits, in fact, are the chassis and the footpegs, and Tony’s already selling as many as he can make in spite of a price tag well over double that of the standard bike. 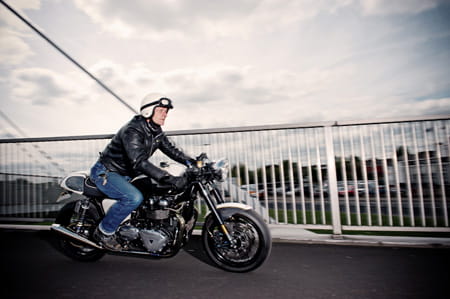 “I could have bored it out to 1000cc, but for me, a bike like this is more about classic looks and fun rather than speed and power,” said Tony.

Thank heavens, then, that I’d brought my Davida open-face helmet, goggles and silk scarf, I thought as I climbed aboard and pressed the go button to unleash a deliciously rorty burble from that bespoke exhaust.

The classic clip-on bars are lower than the standard Thruxton, forcing your weight onto them until you get above 50mph, at which point the wind lifts your chest and with it your spirits as you drink in the panoply of sensations this bike has to offer.

It’s as if the standard model has been called into the headmaster and been told: “Now look here, young Thruxton Minor, you’re a fine motorcycle, but you could be so much better with a little effort.”

Everything about it is firmer and more precise, from the handling to the suspension to the braking.

Acceleration, with power up from 68bhp to 80 and peak torque not only up from 51 to 60 ft lb but coming on song at 4500 rather than 5800rpm, is significantly sharper than the standard bike, accompanied by a divine symphony from that exhaust.

But satisfying though that is, sheer acceleration and top speed, as Tony says, is not what this bike is about, but the sensation of soaring through sundappled bends and taking sheer, unadulterated pleasure in not only the whole experience, but tiny details like the ace of clubs and laurel wreath symbol on the tank above the limited edition number, funky postmodern touches like the LED indicators on the bar ends, the digital dash and, best of all, the single mirror on the right hand bar which was smaller than my wife’s compact, but still showed me everything I needed to know about the road behind.

In fact, if I looked hard enough, I could see a ghostly image of myself, forever roaring onwards to a glorious past on the most perfect incarnation yet of an already very fine motorcycle.