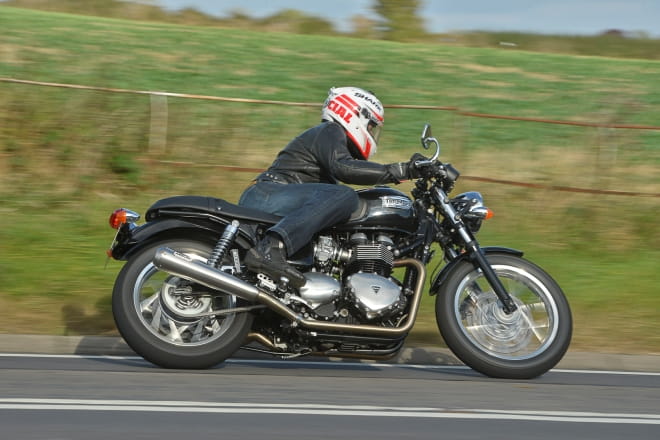 The modern day Triumph Thruxton has the retro-cool look that befits its famous 1960’s cafe racing ancestors. Back in the day the trend was to create a home-made bike based on a British twin, with dropped bars and single seat units among the popular styling twists.

Fast forward 40 years and Triumph revisited that scene with the production of the Thruxton in 2004; a straight-out-of-the-box, ready-made, factory-produced bike based loosely around the Bonneville and using an 865cc parallel twin. Its Thruxton name heralds from the Hampshire race circuit where Triumph enjoyed many successes during the 60’s.

A further 10 years on and here we are, aboard the most up-to-date version, all £7,699 worth, looking resplendent and graceful in one of its two available colours, Phantom Black. The other being Brooklands Green. 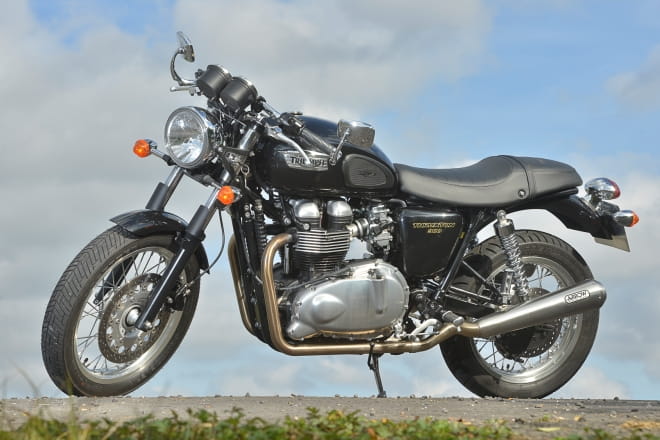 As soon as I cocked a leg over this modern classic the full-faced Shark helmet and sporty TCX boots I was wearing immediately felt as suitable as using a tea spoon to dissect a slab of filet steak. It serves a purpose but it’s just not quite right for the job. That said, they take nothing away from the relaxed feel of riding the Thruxton. Life slows down a bit. You take a deep breath, exhale, feel chilled and then you glide.

Ok so it’s heavy and yes it lacks the significant torque and power some like to feel with a twist of the right grip and yes it’s got a quirky manual choke with an electric start. But it’s comfortable and stylish and the thumpy parallel twin sounds sweet especially with the 2-into-2 Arrow exhausts (a £925 upgrade). We spent a couple of weeks meandering around The Fens and doing a bit of commuting with a whole new found respect from other road users. In this fast-paced world full of road rage and lack of indicator-use, they (collectively) seemed to embrace the Triumph offering a warm welcome to the road and glances of appreciation. From family cars children wave, mums smile and dads offer an envious raised eye brow. And that’s probably because there’s nothing boisterous about this bike, it’s neither aggressive nor threatening in sound or appearance. 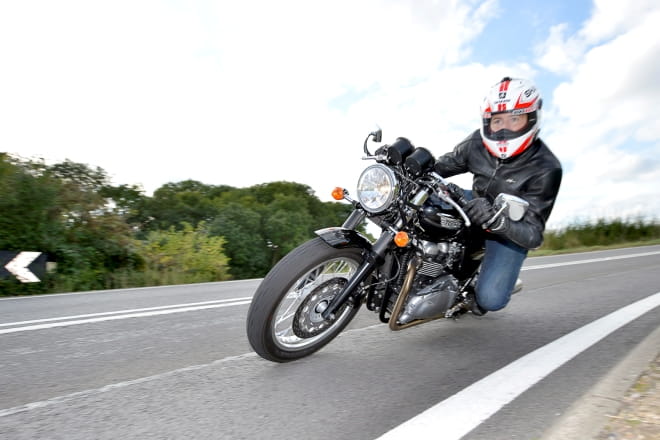 If you’re from a generation who recalls the aforementioned and original cafe racers then you’ll feel quite reminiscent on board the Thruxton but should you have been born in the 80’s or later then just think yourself as the boss of a trendy New York advertising agency…in a big budget Hollywood film. The Thruxton has the ability to make you look cool. Retro cool.

With 69 Nm (or 50.9 ft-lbs) of torque on offer, the engine has enough about it to pull you nicely through the slick 5-speed gearbox. So slick in fact that the clutch can be ignored from 2nd – 5th and back again if you match the engine revs and offer a token gesture of a shut-off of the throttle. It won’t frighten you with its speed but offers enough to warrant its sporty-ish riding position. The foot pegs are placed directly below your hips which propels you into your expected cafe racer-esque position. I was perfectly comfortable but I would imagine any rider of 6’ 2” or above might find it a little cramped from their waist down. There’s enough room between rider and pillion pegs for a size 10 boot positioned on the toes and the dual seat is comfortable enough. I found the bike quite narrow which had benefits with B-road handling and was complemented with knee pads on the side of the tank (a £40 option). 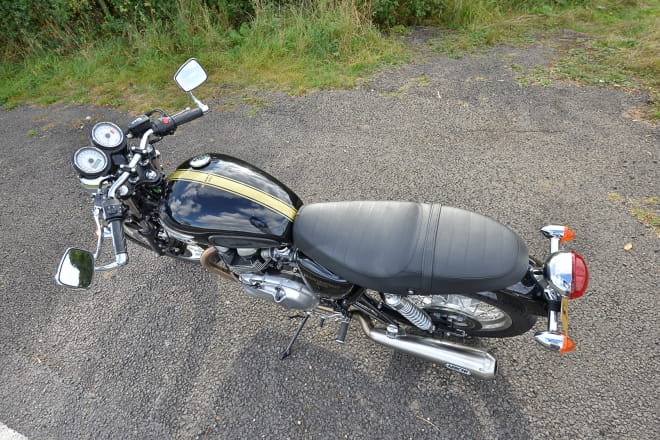 Triumph kept it simple with the bikes’ operations and displays - an analogue speedometer and tachometer with odometer and trip information is about all you get to play with. These twin clocks along with the single headlight unit and indicators are attached to the front forks. There are no engine modes or traction control settings which of course befit the 60’s look, feel and engineering. There’s not even a fuel gauge for its 16 litre tank but you do get a miniscule warning light.

At £7,699 the Thruxton offers good value for a taste of yesteryear with the engineering reliability of modern day machinery. It’s a bike that is good-looking and individual enough to spark conversation among riders as well as those who don’t. It’s comfortable enough for the daily commute despite being designed primarily for the Sunday morning cruise. The retro-cool culture of recent years seems a good fit for the Thruxton and, just like the original 60’s cafe racers, it offers a great platform for a modification or two which therefore attracts an audience of all ages. 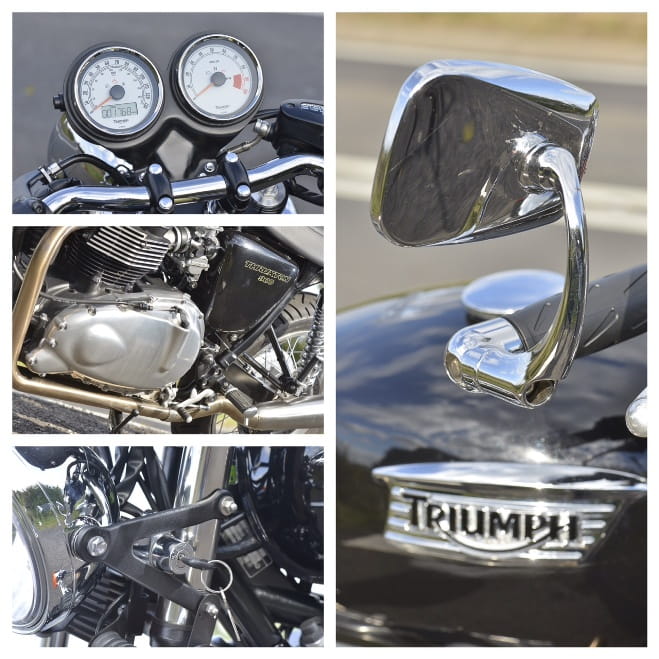 If you'd like to leave a commment here then  or !