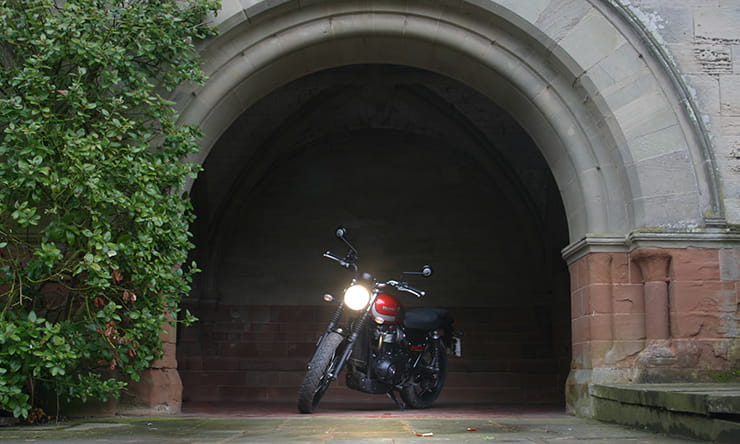 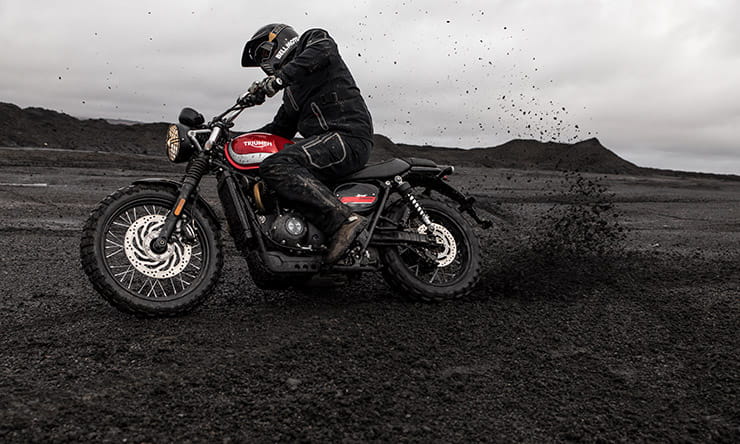 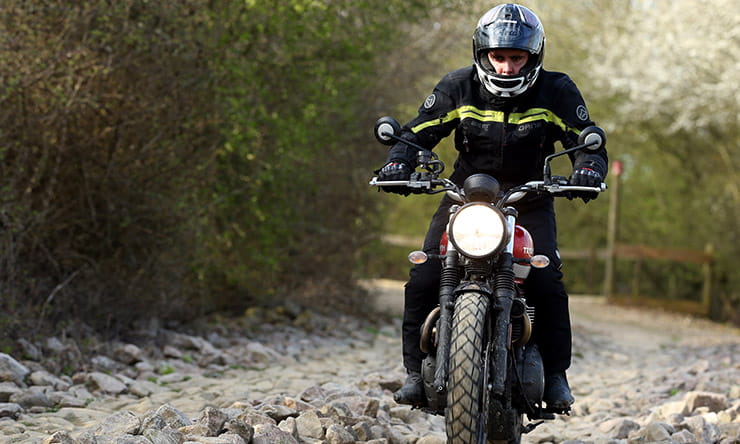 I’ve been riding the Street Scrambler for about three weeks, clocking up over a thousand miles with the bike. I’ve used it for my daily commute from Coventry to Peterborough, a mild green lane ride and even a California Superbike School Advance Rider Skills course at Bedford Aerodrome.

Prior to riding the Scrambler I’d been lucky enough to enjoy Triumph’s pocket rocket, the Street Triple RS. Pulling up the road from the factory after collecting the Scrambler was a rude awakening. That said, it didn’t take long to get over our first date nerves and begin to enjoy each other’s company. 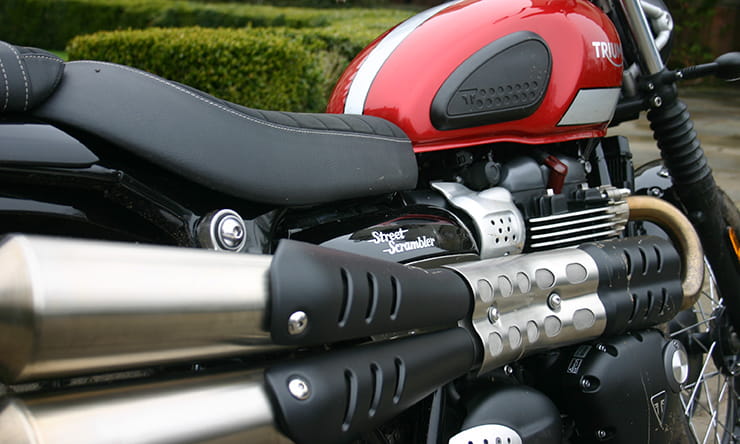 Priced at £9,000 on the road, the Street Scrambler is the more expensive of the ‘Street’ range of machines from Triumph. The three bike range features the Street Twin (£7,800 OTR) and the sporty café-racer-inspired Street Cup (£8,800 OTR). They’re all based around the same engine and frame, with different wheels, seat, handle bars, suspension and paint differentiating the models. If you were looking to buy the Scrambler, a £1000 deposit and 4000 miles a year would drain only £133 from your account a month over 36 months.

Another financial plus is that the ‘Street’ range of bikes all kick out about 54bhp, meaning insurance prices for new riders will be low, but you still get that big bike feel and character. 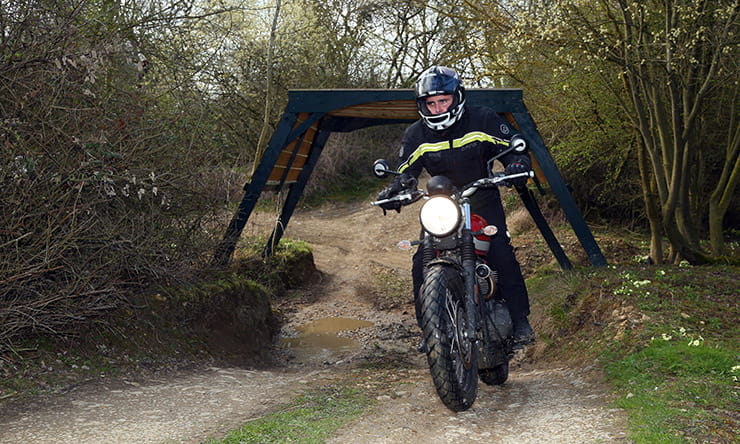 The Street Scrambler makes a new-rider-friendly 54bhp (claimed) at 6000rpm and a claimed 80Nm (59lb-ft) at a low 2,850 rpm. Now, these numbers might not sound like much to some but, firstly; this bike isn’t aimed at the power hungry knee-down heroes of the track-day fast group. Secondly; you don’t need big bhp to bring a grin to you face. And that’s exactly what I found on the Scrambler. Yes, you have to ride it quite hard to get the most from it. It took me about 50 miles to figure out where the best dollops of power and torque were – sadly Euro 4 has done a good job of hiding them – but they are there! You can make good progress through traffic and as long as you don’t expect to fly past that lorry on the A605 that’s already doing 60mph you’ll be fine. 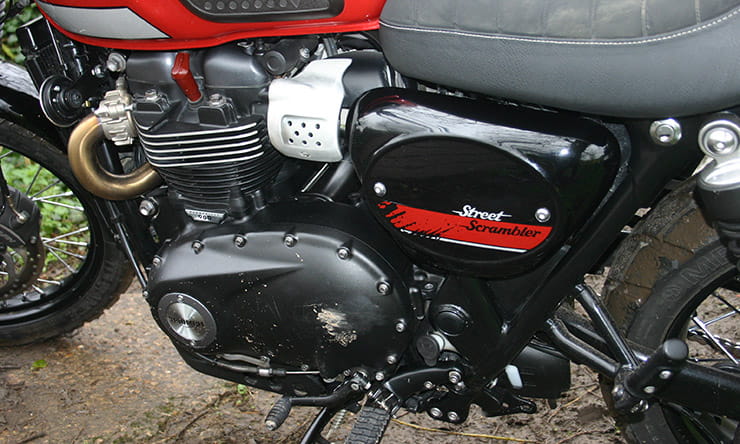 The Scrambler is powered by a liquid-cooled, parallel-twin engine. Its single overhead camshaft manages four valves per-cylinder with fuelling looked after by multipoint sequential fuel injection. Overall the engine is spot on for the brief – it’s fast enough to make a new rider feel like they’re about to take off, yet unintimidating and tractable in pretty much every situation. When the engine was cold I found the fuelling a bit woolly but once it was up to temp and the auto-enricher – electronic choke – had turned off it was a pleasure to ride. As with every Triumph I’ve ridden, I found the ride-by-wire throttle to be very well set up; it still retained the feel of a cable-operated grip without any glitches when rolling on or off. 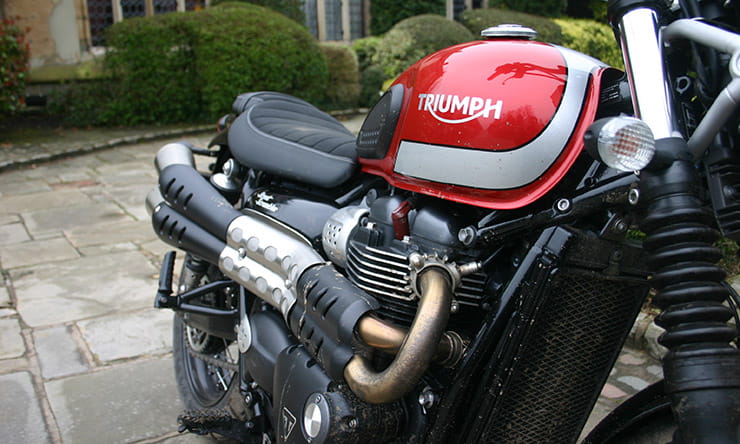 The exhaust is a high-level 2-into-2 system with a catalytic converter mounted on the right hand side of the engine. The exhaust does keep your leg warm if riding in Kevlar jeans but never to the point of being painful thanks to the heat shields for rider and passenger. The exhaust note from the standard system is as retro as the styling. Partly thanks to the 270° firing order, but also the short pipes and megaphone silencers – the Scrambler is all about the burble! Rolling along in 5th gear at 30mph with see the twin’s rev-counter show about 1,700rpm, and the exhaust note sounds fantastic. Even my other half, who’s been on the back of most of the bikes I’ve tested, mentioned it was the nicest sounding bike she’d heard. And the Vance & Hines option exhaust is even better!

The gearbox on the Scrambler is a five speed with a long throw that gives out a decent ‘cluck’ when the next gear is selected. It’s sweet to use and the long throw plays to the bike’s strengths in a way. I mean it’s nice to ride a bike that you can feel what’s going on beneath you. It’s not vague or slushy; I think a new rider would like that positivity and feedback. 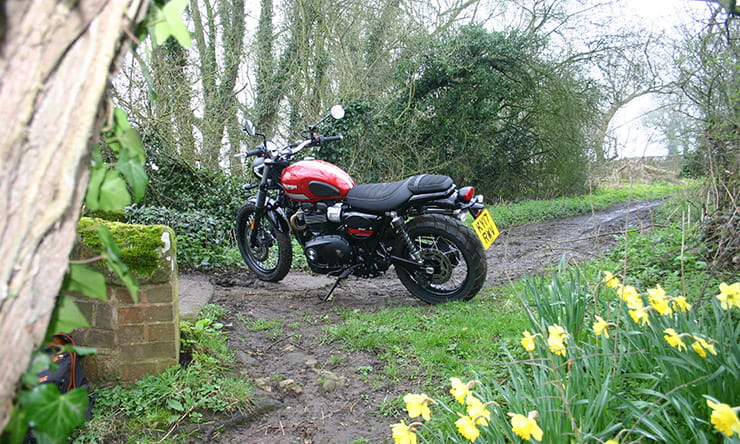 For a 900cc twin the Scrambler returns surprisingly high mpg. Keeping below 70mph on my commute to work – consisting of town, dual carriageway, motorway and B-roads – would return an average of about 67mpg. Any attempts to increase the average speed would see the mpg plummet. Drastically! With nothing to hide behind, you and the bike have the aerodynamics of a spider crab on a push bike; not ideal for chasing high-speed / high-mpg journeys. That said, I could make the 140-mile round trip from home to the office and back again for about £14.

Sadly the Scrambler’s tank is a little on the small side; at 12-litres it’s just too small to make the commute on one tank, meaning a top-up on the way home would be needed to prevent any range anxiety. 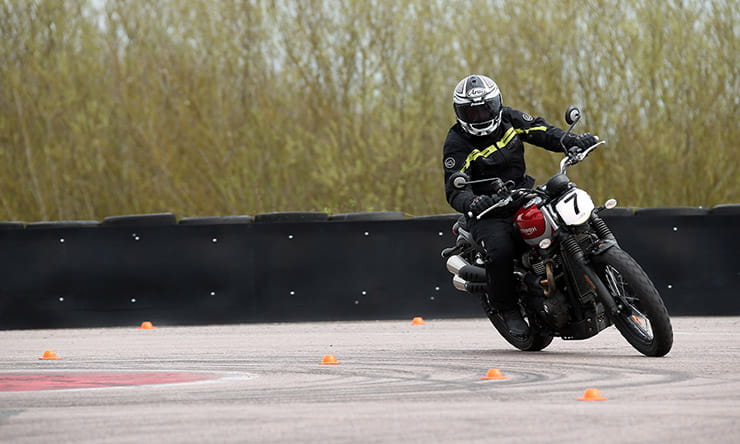 Think scrambler and you might think wallowing suspension, vague front-end, compromised road manners… but you’d be wrong. Its suspension hardware is exactly the same as the other bikes in the ‘Street’ range, meaning you have compliant but not overly soft suspension, decent weight-distribution and an accessible seat-height at 790mm. The KYB 41mm forks have 120mm of travel, meaning they’re more at home on the road but also just about capable enough for some light green-lane riding if the mood takes you. The mood took me, so I found a lane and took it for a spin. Ground clearance was an issue and if you wanted plush a set of piggy back Fox shocks would do the trick.

Even taking the Scrambler on the Advanced Rider Skills day with the California Superbike School was a blast! The Metzeler Tourance tyres provide a surprisingly solid base for track riding, which easily saw me scraping the footpegs. Sorry Triumph! I even managed to engage in a bit of a battle with a chap on a GSXR-1000, he did have to do a double-take as I nipped up the inside of him on the short back straight. I didn’t see him again after that come to think of it… 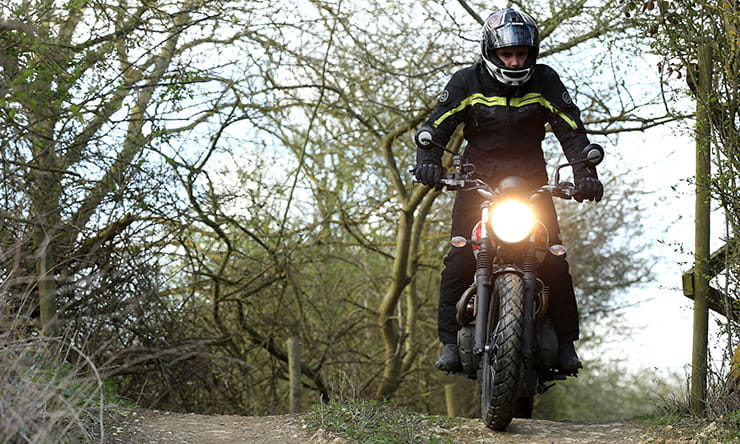 It’s worth noting that the Street Scrambler isn’t just a styling exercise; with some selected mods from Triumph’s aftermarket catalogue you can turn this into a properly enjoyable off-road machine. The Triumph Adventure Centre in Wales even has a fleet of them with super-knobbly Pirelli Scorpion Rally tyres and plush Fox shock absorbers that you can go blasting round the Welsh hillside on.

And they’re really good! With a low centre of gravity and the traction control turned off, this mild-mannered boulevard cruiser becomes the coolest mud-plugger around. And the best thing is that the power it has is just enough, meaning the engine just does its thing without the ECU interfering, like it would have to on more high-powered, off-road machines. 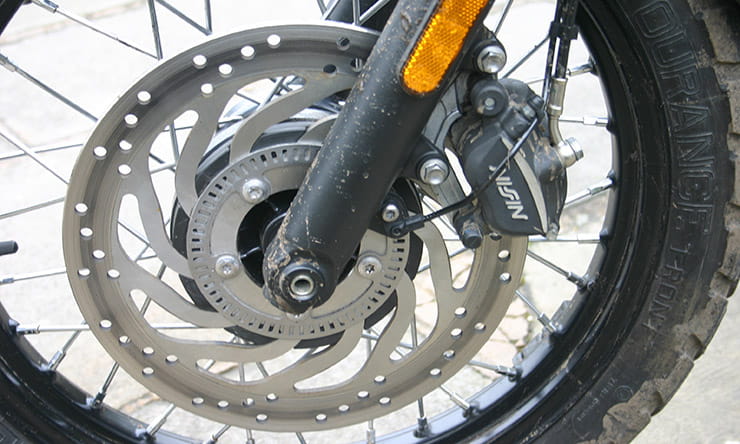 The Scrambler’s Single 310 mm disc and Nissin two-pot floating calipers are my only bug-bear. For me they lack bite and feel. This probably wasn’t helped by the fact that the first time I rode the Scrambler, I had just jumped off Triumph’s Street Triple RS, with its swanky Brembo M50 Monoblocs up front. The Scrambler’s brakes took some getting used to, but you do get used to them and again, the bike is aimed at newer or returning riders who might not have experienced top-end stoppers before. 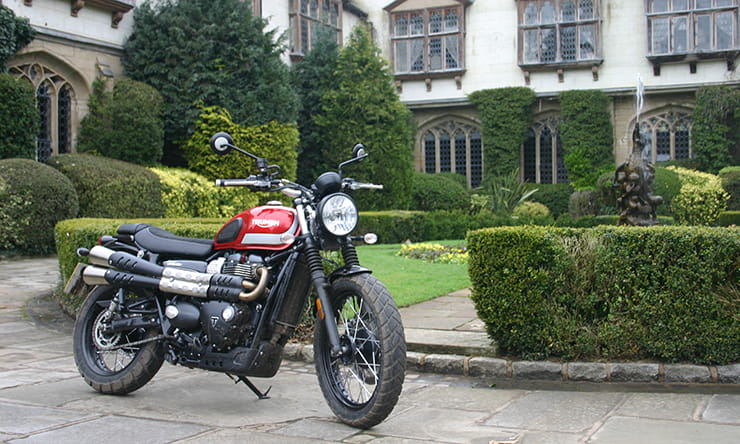 It’s okay, but not great. I did about 230 miles in a day on mine – granted that’s more than most owners will – and by the end of it my right knee was aching. To get around the exhaust your right leg has to kick out at about 40°. This not only puts pressure on my knee and hip but also meant my leg acted like a sail at motorway speeds. The positioning of the exhaust also meant that standing on the pegs when the going got muddy was tricky but not impossible. The Triumph options catalogue includes anodised bear-trap footpegs, if you’re a stand-up kinda rider; these would be top of my Christmas wish list. They look pretty funky too.

Aside from the leg positioning the rest of the ergonomics are fine; the bars are wide but nicely set back and easy to reach, while the seat is thin but surprisingly well padded and low enough to allow shorties – like me – two flat feet on the ground. 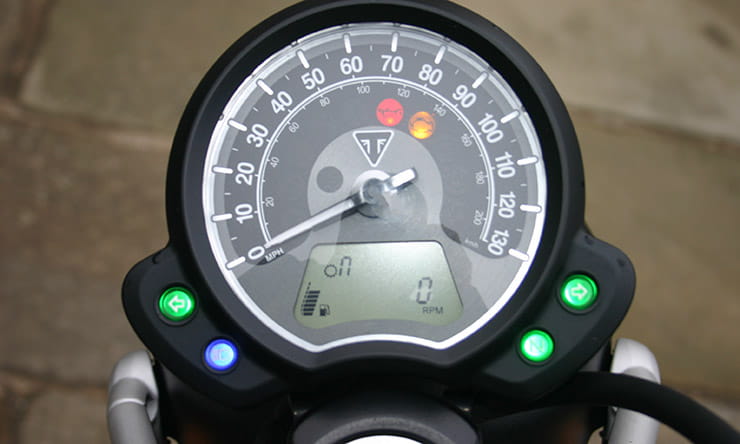 The Scrambler’s dash consists of a large outer analogue speedo, with a smaller multifunction LCD display that can be configured to show range, service indicator, clock, two trips, average and current fuel consumption, traction control status and RPM. You also get a gear indicator and fuel level. All the controls are well placed and although some of the plastics feel and look slightly budget, I didn’t have any problems of gripes during my three weeks with the bike.

Unlike some of the other machines in Triumph’s range that use this dash set-up – the Bobbers use the same system – the Scrambler doesn’t get the same adjustable mount as its bigger, pricier siblings. I did find that on some mornings and evenings – when the sun was low – the dash was tricky to read and the option to move it to a more readable position would have been welcome. 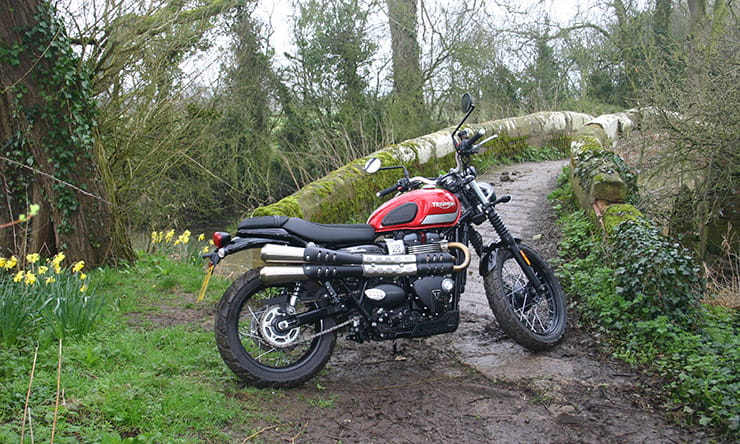 ‘Less is more’ is phrase I rarely understood until I rode the Street Scrambler. The problem is that so often in your life, bikes just increase in power, top speed, lean angle, deceleration – everything has to better, faster, lighter. But you miss out on things. I rode the Scrambler through Pailton, a small retirement village outside of Coventry on a sunny but cool April afternoon. Fifth gear, 25mph, baritone burble in full effect. An old guy was walking his dog along the pavement and he stopped, he didn’t wave his walking stick and mutter under his breath like he would of if I’d been on a superbike in Power Ranger leathers. He just stood there and smiled, even gave me a nod!

If you ride this like a superbike you’ll hate it. Don’t force the square peg into the round hole, just take it all in. Slow down, relax. There was a game I played when I had the Scrambler that was actually massive fun, I called it the ‘See how quickly you can get into top gear’ game. It’s not about going quick, it’s about thrumming along below the speed limit in top gear. It’s surprisingly addictive!

One of the best times I had on the Scrambler was on my commute to Peterborough, the day after I picked the bike up. I played the ‘see how quick you can get into top gear’ game on the way. I got to work in the same time as I had on the Street Triple RS. And I didn’t arrive like a sweaty, incoherent mess. 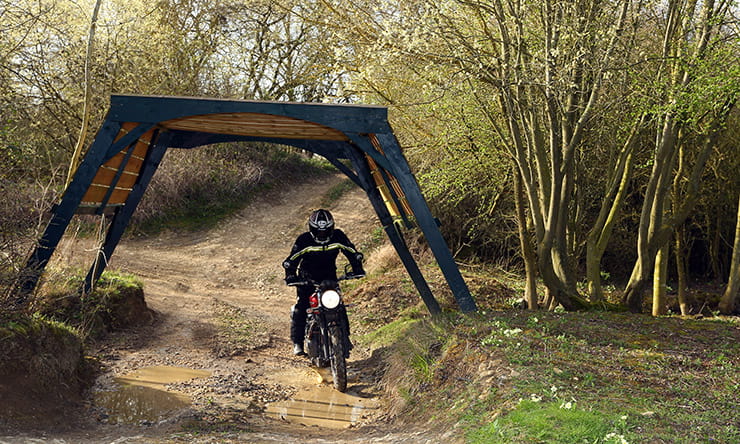 Three things I loved about the Triumph Street Scrambler…

• Actually seeing things as you ride – instead of a blur!

• Another couple of litres in the tank would be great 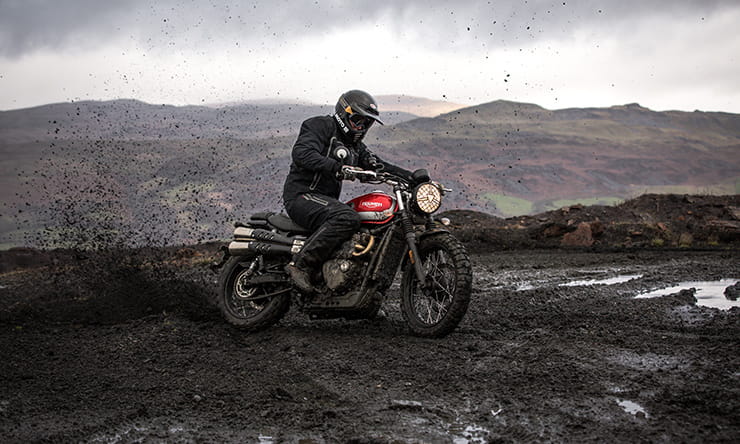 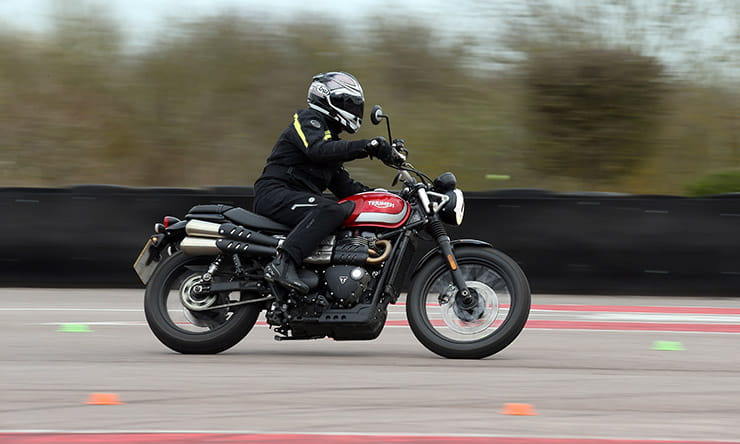