As much as we hate to admit it, motorcycles are a bit of a fashion statement for some of us.

Let’s be honest, we all like to feel that we’re riding around on the latest, fastest, most powerful and gadget laden bike of the season, and manufacturers are usually keen to pander to our wants and needs.

But back in 2010 Triumph released a bike so uncool, so out of fashion, that it makes your cousin Cedric look like Arthur Fonzarelli. 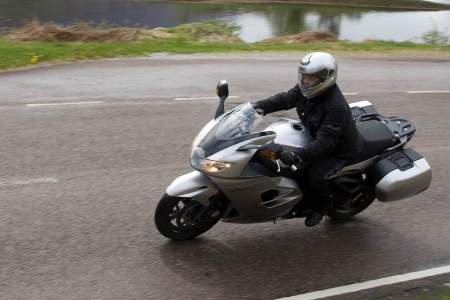 For a brand pumping out some great bikes and trading on the legacy of Steve McQueen, the Sprint GT was something of a disappointment to Triumph fans.

The problem with the Sprint is what it’s not, rather than what it is. It’s not a tall and en vogue adventure tourer like a GS or Tiger, it’s not a shaft-driven luxury tourer like the RT or Trophy and it’s (definitely) not a sports bike like a Fireblade or even Daytona.

Having spent months riding a Sprint GT I feel the need to spring to the defence of this helpless whipping boy. While it may not be any of the above, it’s also got a pretty low seat for shorties like me, a relatively low (for a tourer) 268kg weight due to its simple chain drive and a decent degree of comfort thanks to the very natural riding position. At a pound under nine grand it comes fully loaded with some massive luggage capacity. That makes it very good value for money, and that’s important – right?

It’s also got 130 bhp from the incredibly engaging 1050cc Triumph triple and enough carrying capacity to shame most bona fide tourers when fitted with the huge 55 litre topbox and the standard fitment panniers. However, it’s that carrying capacity that led to the relatively cool reception that the GT received upon introduction because, to cope with the extra weight the GT is expected to carry, the swingarm and subframe are both longer and heavier than those on the Sprint ST that preceded it. That, in turn, leads to a bike that feels a bit lazy to turn when pushing on but which is stable and predictable enough. The basic right way up forks and four-pot brakes would not have been cutting edge in 2004, never mind 2014, but do an adequate if not exactly outstanding job. The adjustable (for preload and rebound) is a bit on the soft side out of the box but if you’re complaining about that on a regular basis, you’re probably riding the wrong bike.

With bikes like the Tigers and Trophy in the Triumph range, it’s kind of hard to see what the future holds for the Sprint GT. Until Honda introduced a new VFR800F for 2014, manufacturers as well as customers seemed to be completely ignoring the sports touring sector, but as long as there are at least some riders looking for a practical all-rounder, it looks like there will be a place for the last remaining examples of this once popular genre.

And, you know, the Sprint GT is not all bad. In fact it’s not bad at all. It’s a heck of a lot of bike for the money and the 2014 model is absolutely loaded with Triumph accessories, including that enormous top box, heated grips, touring screen and comfy gel seat. In that spec, the Sprint GT SE shares exactly the same luggage set up as the Trophy uber-tourer, which rolls out of the showroom sans topbox for £14,299. The 1050 may be as glamorous as a date with Deirdre Barlow, but it’s earnest enough and still able to show a decent turn of speed.

In many ways, it’s a just a bike out of time. That doesn’t make it a bad motorcycle, just a solid and dependable all-rounder that’s never really been in fashion. I really enjoyed my time with my Sprint GT but, then again, I also happen to enjoy a bit of dad dancing in my beige slacks.