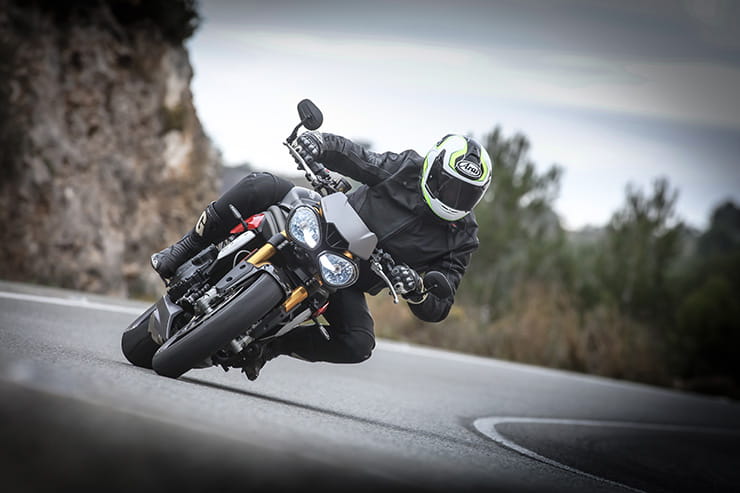 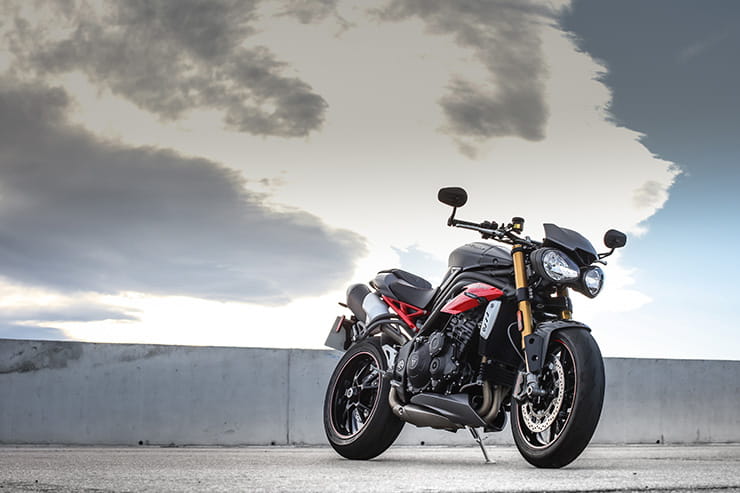 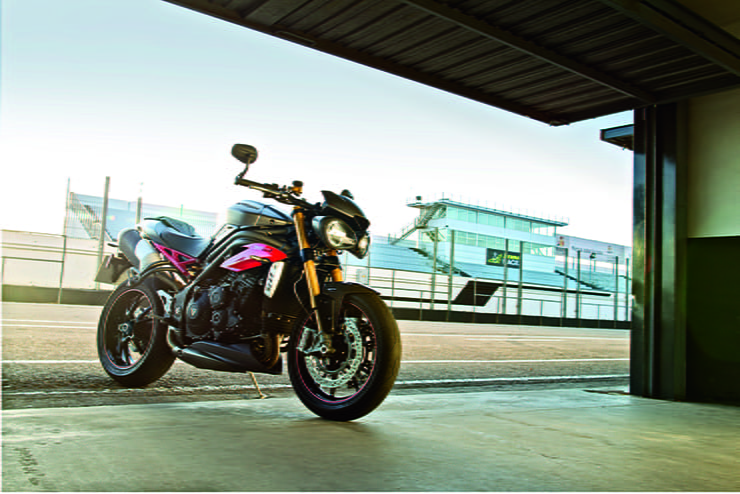 While the Speed Triple’s wonderful 1050cc triple engine was enough to win it friends the world over, by 2016 its lack of electronic assists compared to its rivals was starting to become an issue. Triumph needed to arm their naked bike with a bit more power and the latest in terms of rider aids and so in 2016 they did just that – boosting the bike’s power to a claimed 138bhp and adding rider modes and traction control through a new ride-by-wire throttle to go with its switchable ABS system. The latest generation of Speed Triple had arrived and it was very, very good…

While the 1050cc liquid-cooled triple retained the same 79mm x 71.4mm bore and stroke as before, Triumph claimed the 2016 bike’s motor had received over 104 new updates and developments to help it feel freer revving and also increase its performance. While its 138bhp (up from the previous model’s 135bhp) with the same 82.6ftlb of torque may not sound that impressive, peak figures don’t tell the whole story. Within the motor a new style of piston and lighter crank combined with a redesigned combustion chamber and reprofiled ports gave the gases an easier route towards the explosion area - and when there a revised fuel system with a new ECU and ride-by-wire throttle ensured the resulting bang was more efficient than ever before. This improved combustion and lighter internal components allowed the Speed Triple’s engine to pick up revs faster, giving a far more spirited feeling in its acceleration and overall character, helped further by a 70.2% freer-flowing exhaust system! Add to this new gear linkages, new balancer gears and a new slip and assist clutch and it all added up to a bike that feels chalk and cheese when compared to the older generation. 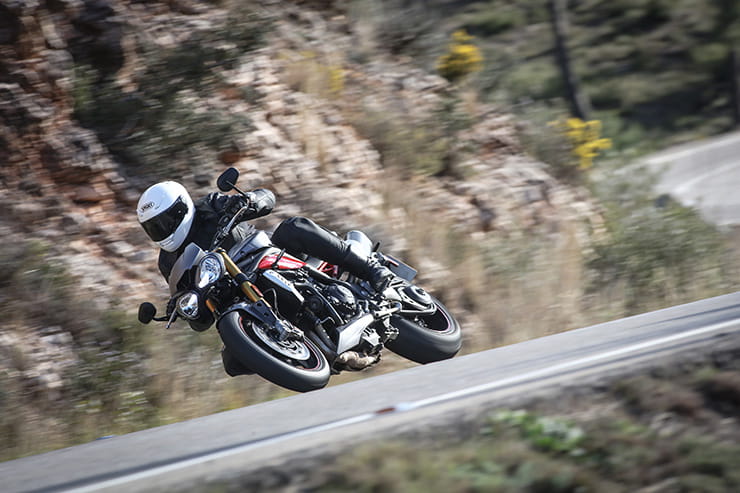 Both the R and S share the same updated triple motor.

The 2016 update was far more targeted towards the Speed Triple’s motor than its chassis and while it did shed a small amount of weight (Triumph only claim a dry weight of 192kg where they claimed the outgoing model was 212kg wet so it is hard to quantify this) the chassis was left largely unaltered. The single sided swingarm is the same as before and so is the aluminium alloy twin-spar chassis. Well, if it isn’t broke…

The 2016 Speed Triple comes in two forms with suspension effectively being the major differences. The standard S model has 43mm Showa forks while the R has Öhlins NIX30 units. On the rear the S also carries a Showa monoshock where the R gets an Öhlins TTX36. Both bikes have fully-adjustable suspension front and rear and both have the same 825mm seat height.

In order to give the Speed Triple a bit more bite, 2016 saw the arrival of Brembo M4.32 radial monobloc calipers on both Speed Triple models that grip 320mm discs. Armed with ABS as standard that is also linked to the rider mode selected, the ABS has three settings – Road, Track and Off. The rear brake is a single piston sliding unit with a 255mm disc. 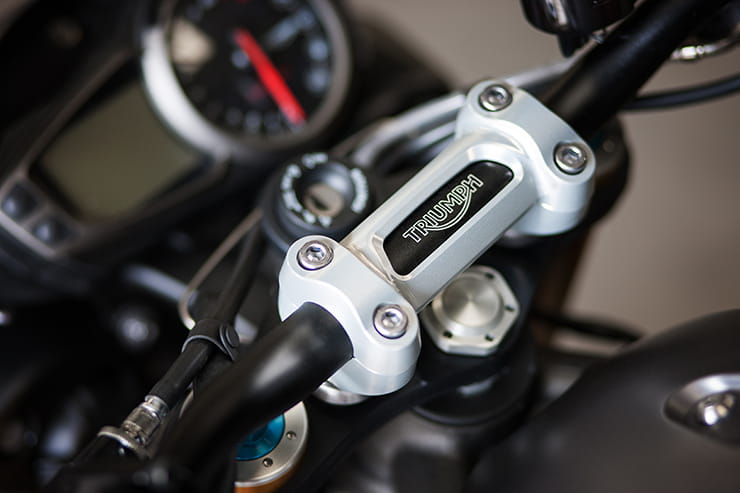 The R gets a billet machined handle bar clamp

Here it gets exciting! The addition of a new ride-by-wire throttle allowed Triumph to give the 2016 Speed Triple far more advanced electronics for the first time. Boasting ABS, five rider modes (Rain, Road, Sport, Track and Rider-configurable) and four traction control settings (Rain, Road, Track and Off) these are all linked so that when you alter the rider mode, you also automatically vary the ABS and TC settings. And in Rider-configurable mode you can store your own unique combination of ABS and TC. Interestingly, the Speed Triple’s ECU was also new in 2016, well new for the naked bike as it is the same ECU as used on the Daytona 675! A gear position sensor was also new, allowing a factory-fit quickshifter to be an optional extra, and a tyre pressure monitoring system was also an optional extra that links to the bike’s all-new LCD dash. DRLs are standard on both the S and R model. An IMU only arrived in the 2018 update on the RS model.

Triumph actually made the Speed Triple’s seat 20mm narrower in 2016 as well as re-sculpting the tank and integrating a low fly screen, so it is a touch more comfortable than before. The new bar-end mirrors aren’t to everyone’s tastes, but it’s a comfortable naked bike as long as you don’t mind a bit of wind blast.

The back of a Speed Triple is never a great place for a pillion and the seat is small and the bike lacking any grab rails. Not really ideal for anything other than short hops. 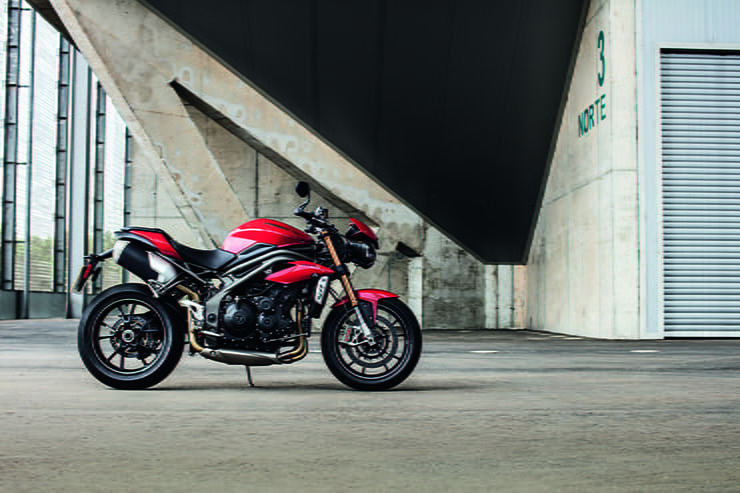 Not exactly the height of pillion comfort…

This is a hugely accomplished motorcycle, taking the icon Speed Triple a large leap forwards. Feeling like a proper grown-ups bike, it still hauls and comes dressed with some top equipment making it attractive to riders of all ages. Contemporary with its styling, rider modes and torque curve while credible, iconic and authentic with its history, build quality and refined engineering. Is it worth upgrading if you’re riding around on a 2015 model? That’s a tough call but even before I’d even ridden the new bike, a Triumph test rider said to me “the difference between the two is like night and day”. After a day on the 2016 ‘R’ I don’t necessarily agree. Certainly, there’s plenty of differences for the better but when so many components including the chassis are the same, maybe we can put the difference down to sunset and day instead.

While the Speed Triple was updated again in 2018, the 2016 bike is still a brilliant used buy as it comes with exactly what Speed Triple fans demanded. The motor feels fresher while still retaining the user-friendly nature of before and the addition of clever electronics makes it safer while not detracting from the fun factor that has always been at the heart of this great bike. If you own an earlier Speed Triple 1050 model you will love the updated 2016 bike and in all honesty, you won’t be disappointed that you haven’t bought the all-singing 2018 model unless you like to take your Speed Triple on track. 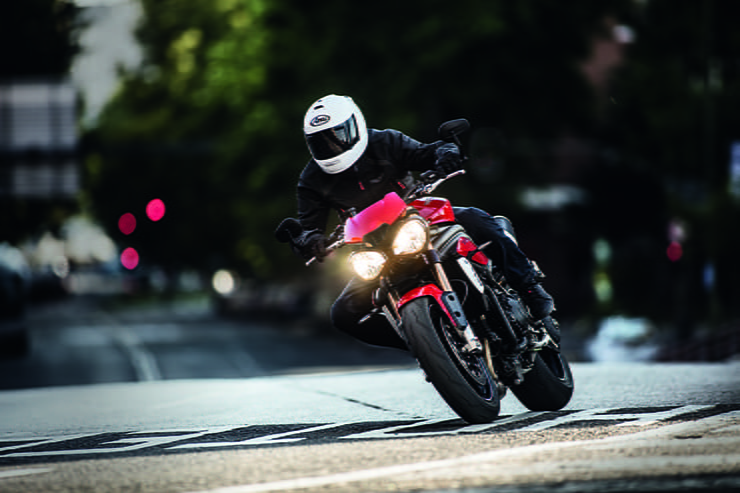 As you are talking a relatively new bike there isn’t that much to be wary of when it comes to buying a used 2016 Speed Triple, especially considering the long development history of the 1050 motor. As with all Speed Triple models, be cautious about the eccentric adjuster on the rear wheel as it does seize up (they all do) if grit and grime enters the system and also check the suspension linkages haven’t been pressure washed clean of any grease. Unlike older 1050 models, this generation is happy to take a quickshifter without the potential of inflicting gearbox damage, but it is always best to buy a bike with an official Triumph unit (it is plug and play) rather than an aftermarket one. As the bike is relatively new, always perform an HPI check to see if it has an outstanding finance hanging over its head but other than that you are basically looking at consumables and anything that will allow you to haggle on the price. 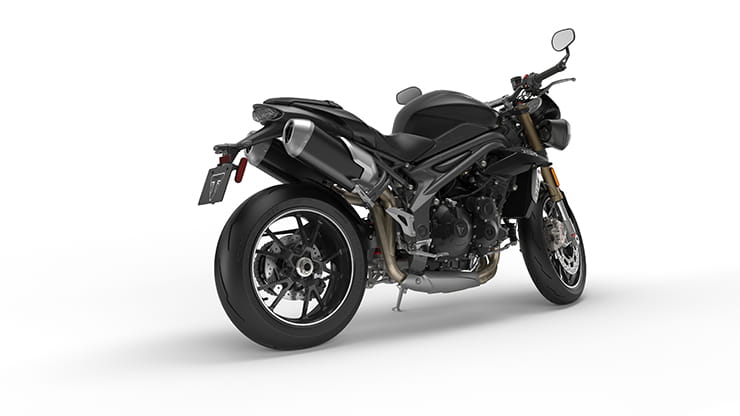 That eccentric adjuster just loves to seize up…

The Speed Triple was updated in 2018 and was also renamed the S and RS as opposed to the S and R. Following the same format as before the S is the base model with the RS gaining uprated chassis components. The 1050cc motor was overhauled once again, gaining 10bhp and 3.7ft.lbof torque and also a faster revving nature, while the whole bike shed 3kg in weight. The RS comes with a quickshifter and autoblipper as an optional extra but an IMU and Arrow cans as standard and both the S and RS feature new five-spoke wheels, new switchgear and a TFT dash.