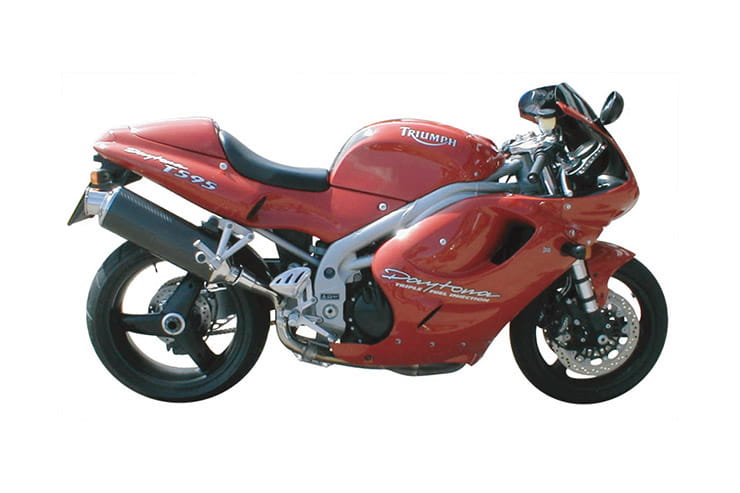 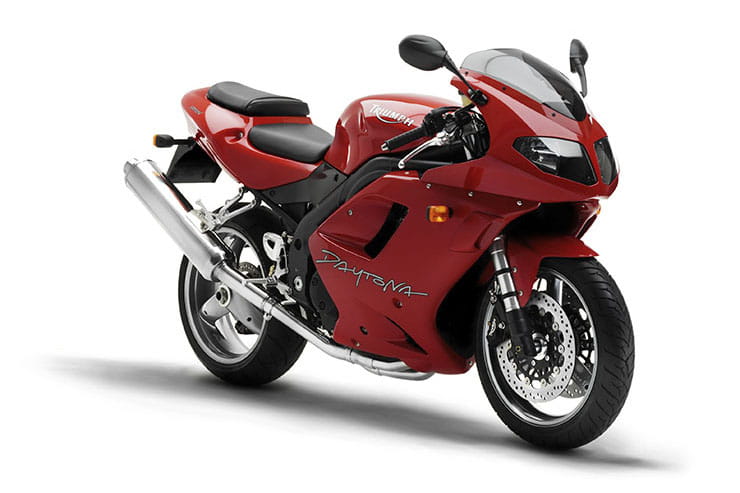 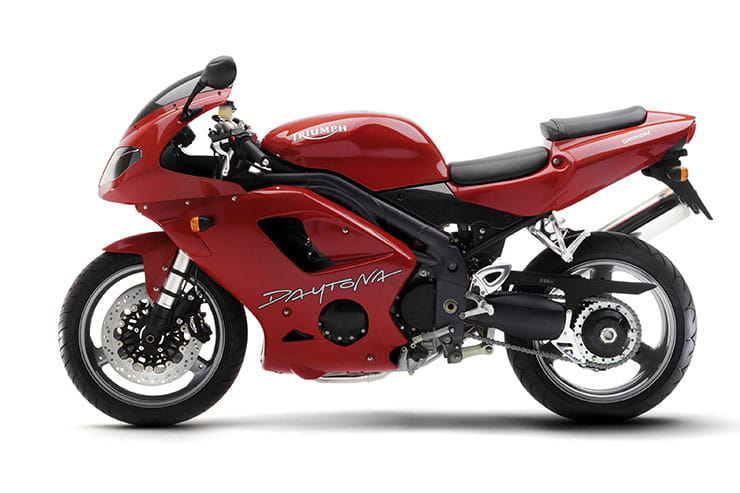 Retro sportsbikes are currently going through a revival as older riders look to recapture their youth. Or more precisely, the bikes they couldn’t afford or threw through a hedge during their youth. Machines such as the 1992 Honda FireBlade, 1998 Yamaha YZF-R1, Kawasaki ZX-7R, Suzuki GSX-R750 SRAD and Yamaha YZF750R are seeing their prices climb as decent examples start to become rare. But one bike is still flying under the radar – Triumph’s Daytona 955i.

Ok, you may initially sneer at mention of Triumph’s slightly bulbous triple sportsbike, however hold your horses as this was a bike that had Yamaha not moved the game on such a giant step in 1998 with the R1, which remember caught everyone else by surprise including the other Japanese manufacturers, could have enjoyed far more success. And at the end of the day, we are talking about a 147bhp British superbike here for less than £3,000, what’s not to like?

Launched in 1997 and hyped as Britain’s answer to the Blade, the Daytona was fairly on the money from the start. Using the Honda as inspiration (and a target) the 955i was designed to be a real-word superbike and as such was roomy and comfortable rather than fully track focused – the kind of machine the Blade had matured into. Triumph’s designers did a great job in hitting this brief, the problem was that in 1998 the R1 arrived and everyone assumed the Triumph could match it, which it was never designed to do. As a result when the litre bike class exploded in the 2000s, the Triumph was left behind and even with 147bhp it was no match for the GSX-R1000, R1, Blade or ZX-10R. Well, not in terms of outright track performance…

If you are after a characterful sportsbike that works fantastically on the road the Daytona 955i is certainly worth considering. The triple engine is an absolute pearl (aside from its terrible gearbox) and for sporty A and B-road riding it is on the money. Ignore the peak power figures, which are actually quite impressive, and instead focus on the 74ftlb of torque driving you forward alongside that beautiful triple exhaust note. Add to this a chassis that is more than capable of whipping through the bends but does so without any hint of instability and with plush rather than overly firm suspension, not to mention decent pillion provisions, and there are a lot of reasons to reconsider the Triumph Daytona 955i. And do it now, before everyone else catches on to this overlooked British beauty. 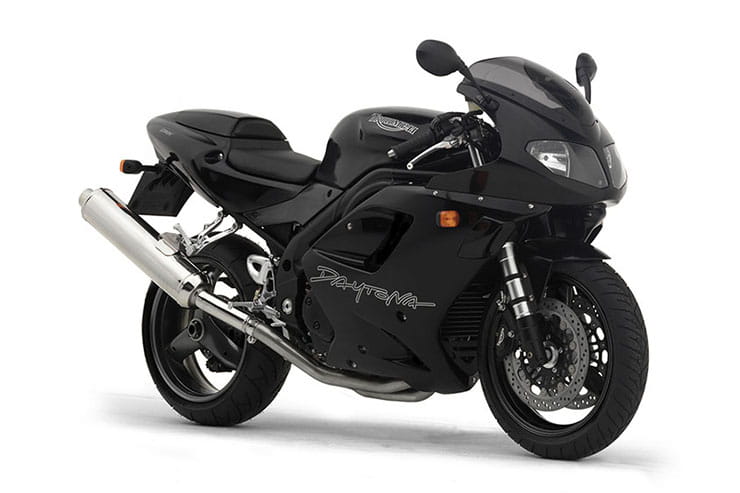 The Daytona 955i is an old girl now and as such she is starting to show her age, which means when buying a used one you do need to be very careful to avoid the pitfalls that turn a bargain used bike into an absolute money pit…

Starting with the chassis, be very cautious when it comes to the eccentric adjuster on the single sided swingarm. These seize solid and if they do you need some specialist tools and a lot of effort (not to mention luck) to free them off. If they don’t come loose you are looking at a new hub, which you can only locate in the used market and as such is getting quite rare. Always slacken the pinch bolt and try to move the adjuster and give it a very close inspection for those telltale marks that indicate it has been attacked with a hammer and drift… While you are there, also inspect the suspension linkages as they also seize up if they aren’t regreased at a minimum of the 12,000-miles Triumph recommend but ideally every couple of years. Warped discs are also fairly common, as are seized caliper pistons, and as on any older machine, check its bearings (head, swingarm, wheels) for play.

Onto the motor and it can be a bit of a minefield. The sprag clutch is quite weak on all 955i models, so listen for a squeak when you hit the starter and if the battery is sluggish to turn the bike over, be a little concerned as this is how sprag clutches get damaged. Gearbox issues aren’t uncommon on the Triumph with 4th and 6th gear tending to go missing, although 2nd is also weak. Always check all is present and correct on a test ride. A few bikes suffer electrical gremlins, but these are surprisingly rare so as long as all the lights etc work and there are no faults indicated on the dash, all should be well.

When it comes to finish the Daytona isn’t that bad. Paint flakes off the motor, which seems more common on newer bikes, and plastics can crack over time but generally it’s not too horrific. As there is nothing overly complicated about the Daytona 955i it is a fairly robust used machine. 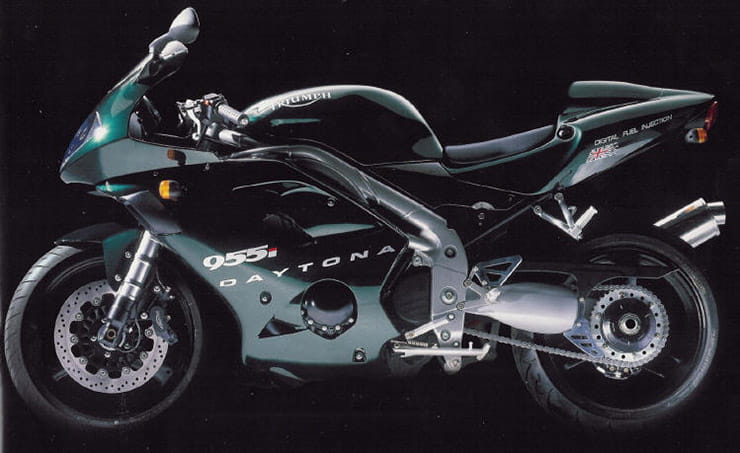 The first Daytona 955i wasn’t actually called a 955i, it was the T595 and emerged in 1997 only to be renamed the 955i in late 1998 after confusions over its name and capacity. T595 made it sound like a supersport bike! In 1998 the renamed Daytona 955i emerged and featured a slightly updated motor and very small tweaks to the airbox and exhaust. In 2001 the Daytona 955i received a major update with power increased by 18bhp to a claimed 147bhp, improved chassis with a double sided swingarm replacing the single sided unit and a sharper look. The Daytona 955i was updated in 2004 with a new fairing, lights and clocks as well as a sharper tail before its final update in 2005 that consisted of a revised cylinder head, cases and tweaked gearbox and swingarm. There have also been a few limited edition Daytona models with the 2001 Centennial featuring a single sided swingarm and the 2003 Special Edition being black and also using a single sided swingarm. 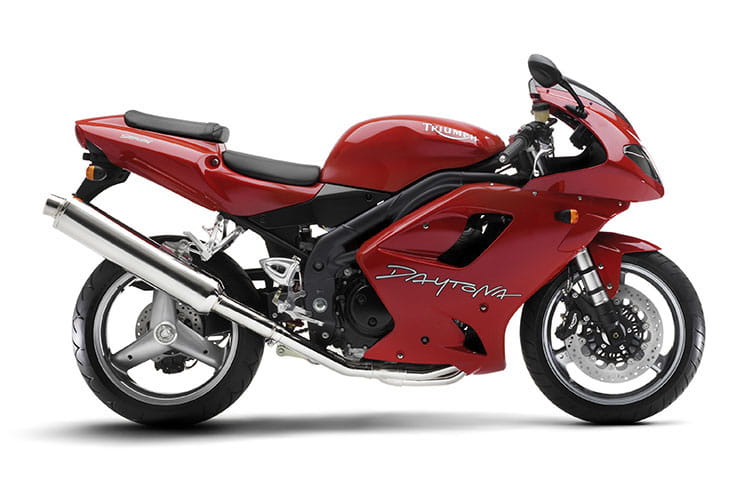 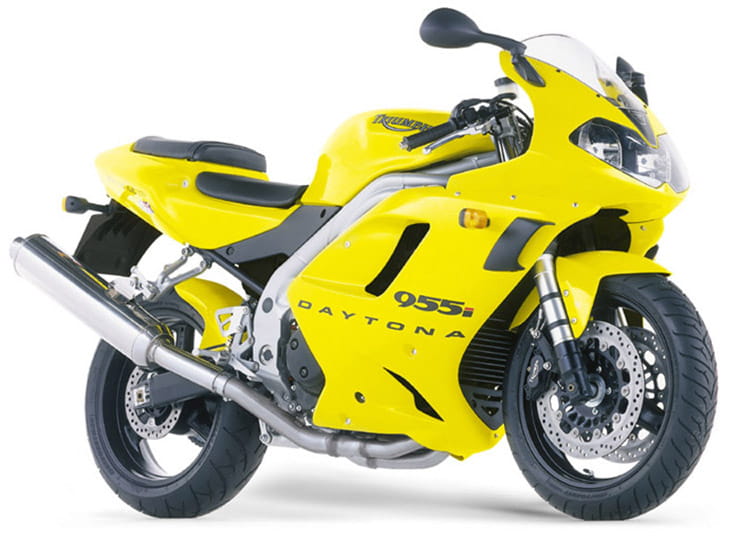 For a little more guidance from those in the know, why not visit the Triumph Forum and head to the Daytona Deliberations area.

And if you want some technical help, contact Clive Wood who is one of the UK’s top independent Triumph specialists.