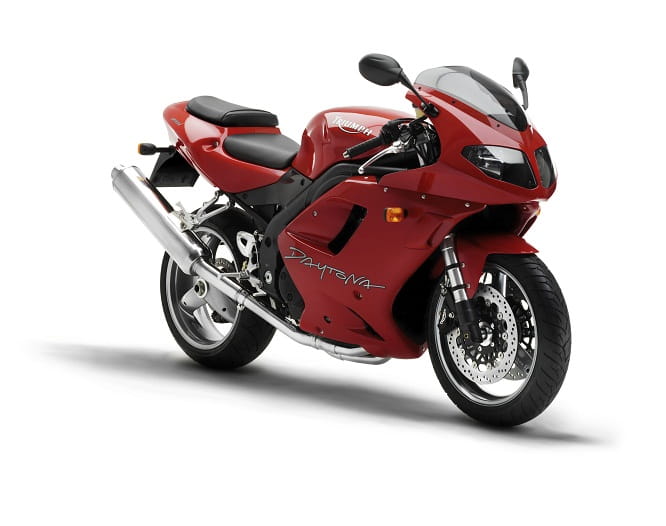 The Daytona 955i is a case of Triumph getting slightly above their station and attempting to chase the Japanese when they really should have instead concentrated on forging their own path. But you have to admire the sheer balls for a small (at that time) British firm to go toe to toe with the Japanese heavyweights. And they very nearly succeeded.

Originally unveiled in 1997 as the T595, this was the British answer to the FireBlade and as such a lot of expectation was placed on the bike. Using a 955cc triple engine, the Daytona was significantly different to the inline four Blade to appeal to many riders, but confusion over the name (Americans struggled to comprehend it wasn’t a 595cc bike) saw it fail to set showrooms alight. Then, when the R1 appeared in 1998 and signified the resurgence in the litre bike class, despite all Triumph’s hard work the triple was never going to be in the running. The Daytona remained in Triumph’s range until 2005, but despite a few updates it was too heavy and underpowered to compete and the firm pulled the plug on the project, instead concentrating on the supersport sector with its new Daytona 675. So why do you want one? Because the Daytona 955i is a wonderful machine to ride and hugely underrated.

Yes, the Daytona is physically larger than its rival sportsbikes, but like the Kawasaki ZX-9R this actually makes it very appealing as a road bike. You aren’t cramped into a riding position that forces all your weight to rest on your wrists with the Daytona, instead it’s a far more relaxed stance and the triple engine has a lovely wide spread of torque, making it perfect for road riding. Not only this, it also sounds pretty amazing, especially with a fruity exhaust can fitted, and stands out from the crowds. But there are downsides.

Triumphs of this period were pretty agricultural and as such the Daytona 955i is a heavy bike and nowhere near as agile as the Blade or R1. It’s still sporty, but far more akin to a sports tourer than a sportsbike. The gearbox, which Triumph still struggle to get right nowadays, is clunky and the finish can be questionable. But does this matter? Not really. You can pick up a lovely Daytona 955i (the later models are the better ones) for under £2000 and at that price you will own a wonderful road bike that is brimming with character and is immensely good fun to ride. 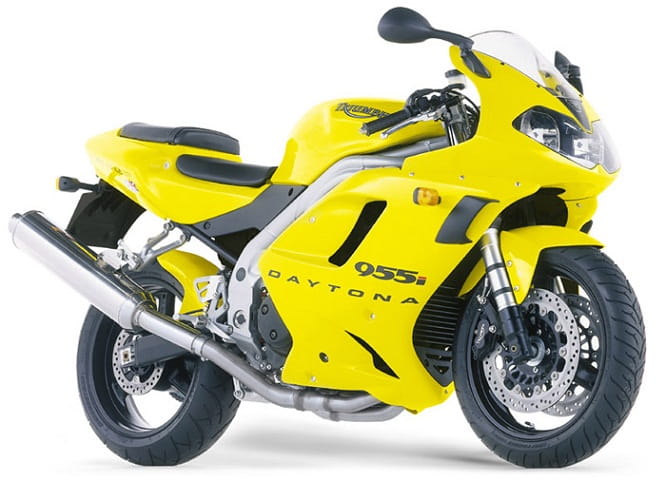 The doom and gloom brigade will harp on about the middle of the 955i’s cylinders overheating, but this simply isn’t true on the 955cc engine. Overall the motor is very solid but it does suffer from silly things such as the sprag clutch slipping (listen for a squeak when you hit the starter), a pretty poor gearbox (well, it is a Triumph…) and reg/recs packing up. The main concern when buying used is the suspension linkages, which should be stripped and greased every 12,000 miles but invariably aren’t, and this causes them to seize up. The eccentric adjustor on single sided swingarm models can also seize, so check it moves freely, and the suspension is fairly soft and often springs leaks so check with a cloth for any signs of oil. A lot of owners moan about the finish, but that’s standard for any Triumphs of this period.

The first 955i Daytona triple was, confusingly, called the T595 despite the fact it actually had a 955cc capacity. This discrepancy was cleared up in 1998 when it was renamed the 955i and received a small update that included tweaks to the engine and exhaust. The bike was totally overhauled in 2001 and, as well as a double sided swingarm replacing the single sided unit on the older bike, the frame’s geometry was sharpened and the motor’s power increased. In 2004 the fairing was re-styled and new clocks fitted before the frame was painted black in 2005 and the gearbox revised in 2006 alongside new engine cases. In 2001 the ‘Centennial’ special edition was released with British racing green paint and a single sided swingarm while the 2004 ‘Special Edition’ was painted all black. 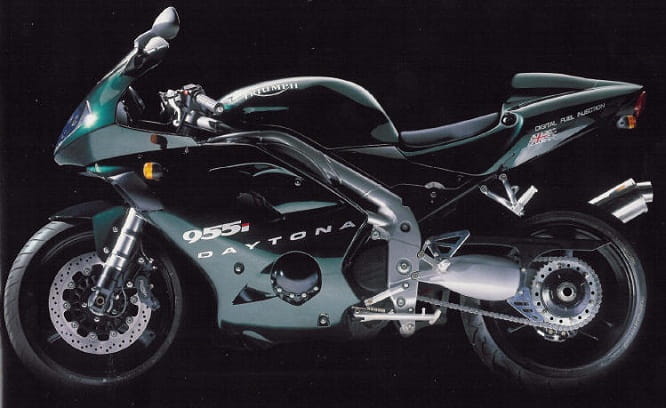 Clive Wood – Clive is an independent Triumph expert and knows everything about the 955i. He can be located via Facebook or

Jack Lilley - Lilley’s has been a Triumph dealer since 1959 and if it has a Triumph badge on the tank, these are the guys to talk to.