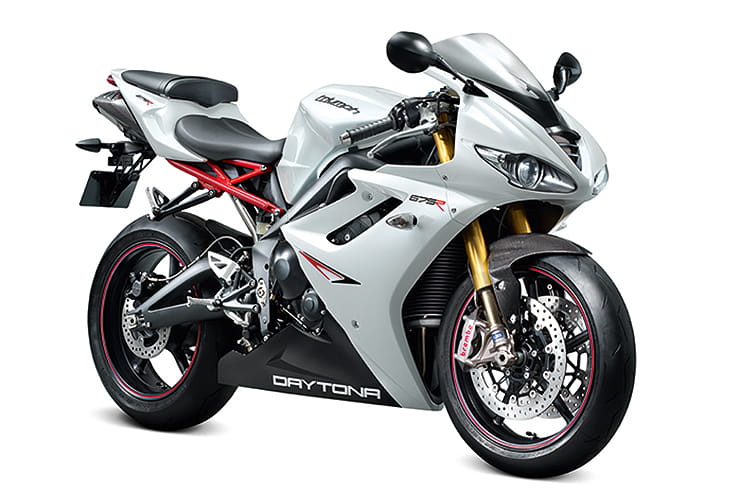 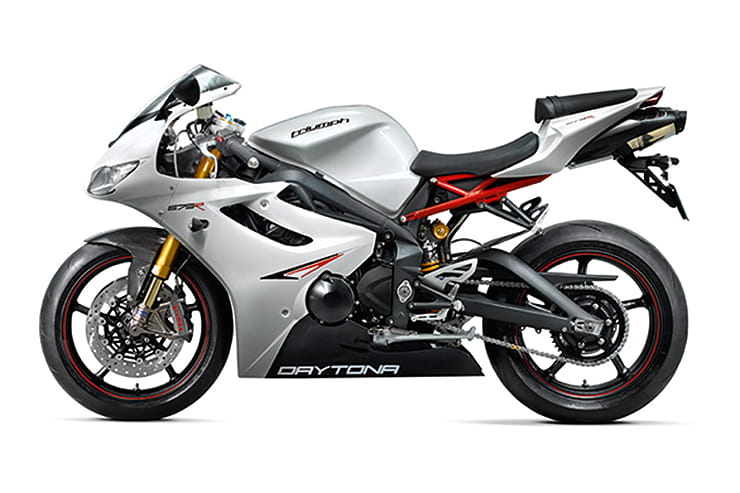 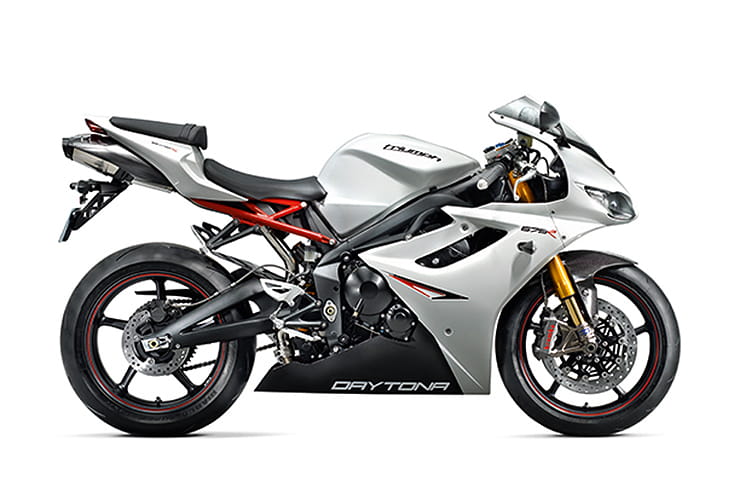 Triumph’s Daytona 675 delivered a hammer blow to the Japanese supersport bikes, demonstrating that sky-high rev limits and frustratingly gutless inline four engines weren’t necessarily a trait of the class through its amazing triple. And then, in 2012, Triumph really pushed the boat out and delivered a high-spec Daytona model that came with top-quality components throughout. If you are after a lightweight race-rep that has it all, including a bit of exclusivity, check out the fabulous Daytona 675R.

Bad news on this front we are afraid as the Daytona 675R remains quite a pricey acquisition. Initially retailing at £9999, which was £1500 more than the stock Daytona, the fact this model was only on sale for one year, the Daytona model’s general desirability and the R’s high specification means that prices are certainly not cheap. Where a stock 2012 Daytona can be picked up for between £5500 and £6000, you have to look at spending closer to £6500 for an R model. And that is if you can find one as currently there are very few for sale in the UK… 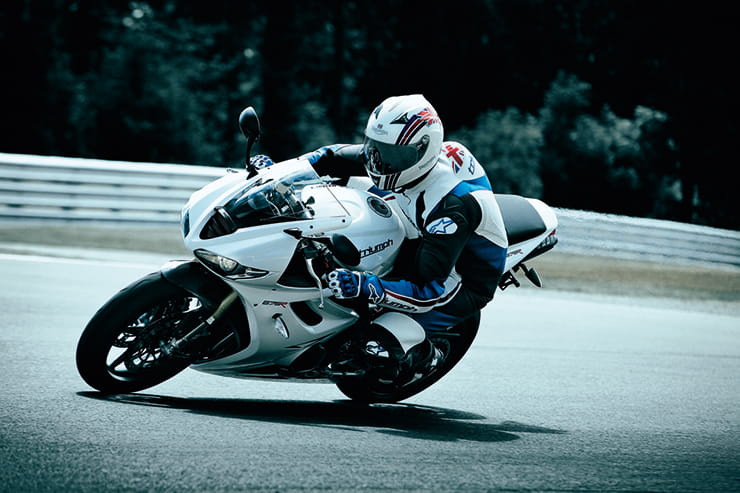 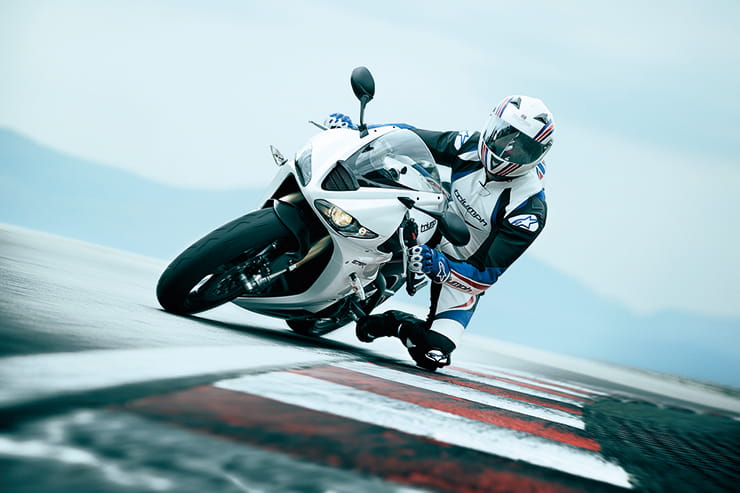 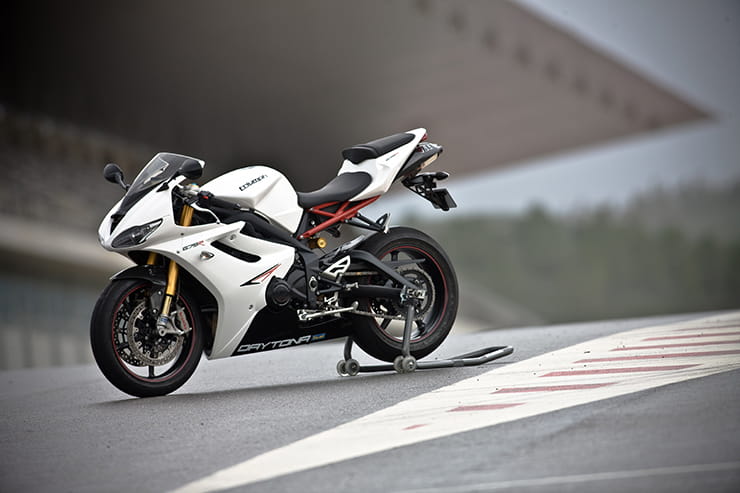 The R’s engine is identical in specification to the stock Daytona 675, which is no bad thing at all. The triple is an absolute beauty and the very first generation of R has the ‘old’ 675 motor, which in some ways has a bit more spirit and poke than the updated motor that is used on the ‘low exhaust pipe’ Daytona models. When Triumph updated the Daytona in 2013 they made the motor bigger bore with a shorter stroke, giving it a bit more of a revvy nature as well as extra power. For road use, the older engine has more grunt where you want it and feels that little bit more relaxed when you just want to take it easy. Don’t think it is slow, up the revs and it can still take off like a scalded cat, but lower in the range it is more eager and that’s a blessing when you are exiting roundabouts or want to be lazy on the gearbox. 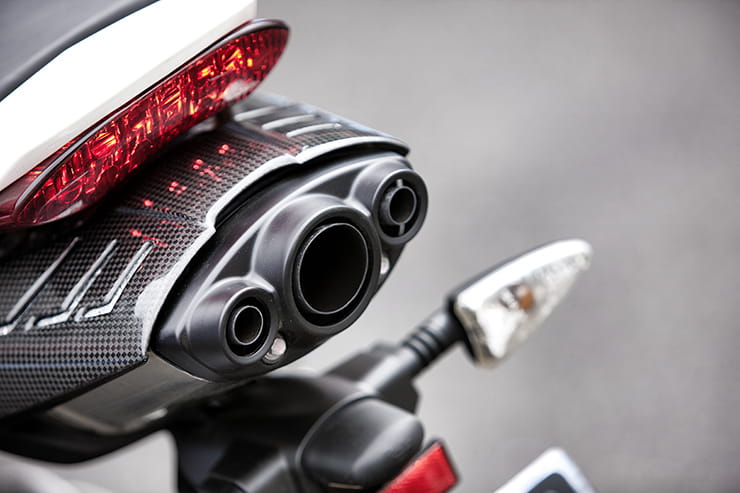 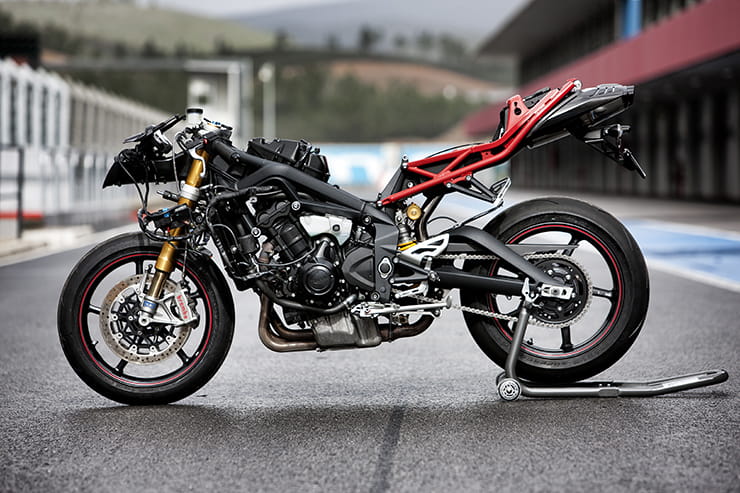 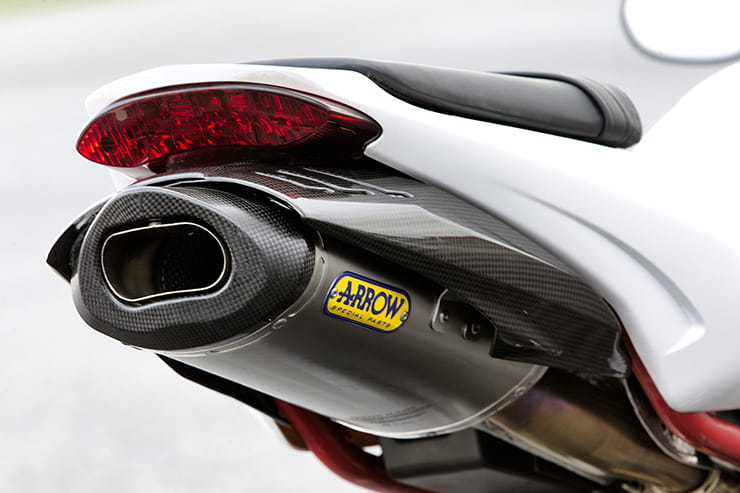 The R model came with a quickshifter as standard (just upshifts, not down) which works well thanks to the fact the 675R’s gearbox is lightyears ahead of that used in the older 1050 triple engine. Nice and slick, if it feels at all rough or notchy then there is something potentially wrong inside due to the previous owner maybe not being positive enough with its engagement. As this generation of triple motor is at the end of its life span (it first arrived in 2006), Triumph have sorted the issues (oil burning, reg/recs) so it is a pretty solid unit and the only major gripe that owners have with the later underseat pipe models is the fact the exhaust can get very toasty in summer, cooking your posterior. Adding a £100 de-cat link pipe (you can cut and shut the OE exhaust) to remove the cat and allow the exhaust gasses to flow a bit better helps matters, as does fitting an aftermarket exhaust, but heat is just a fact of life when you have a cool underseat pipe look. When it comes to aftermarket exhausts, Arrow are by far the most popular models as they were official Triumph extras, and when combined with an aftermarket air filter does add some extra poke to the bike’s mid-range. Exhaust valves also love to seize up, so check it is functioning when buying used. 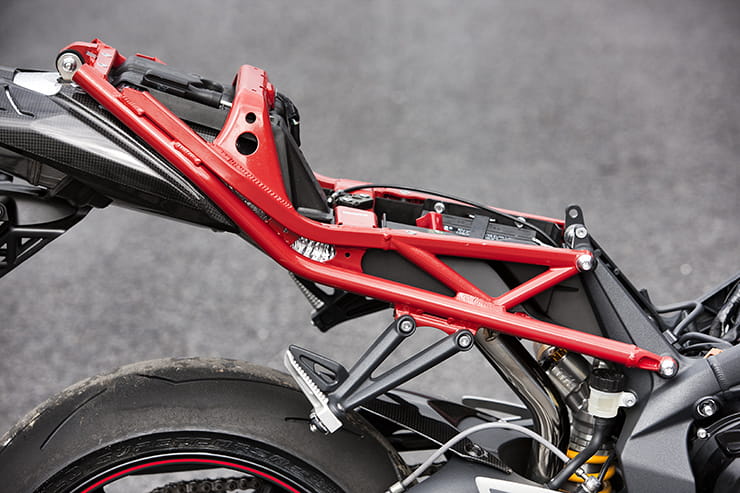 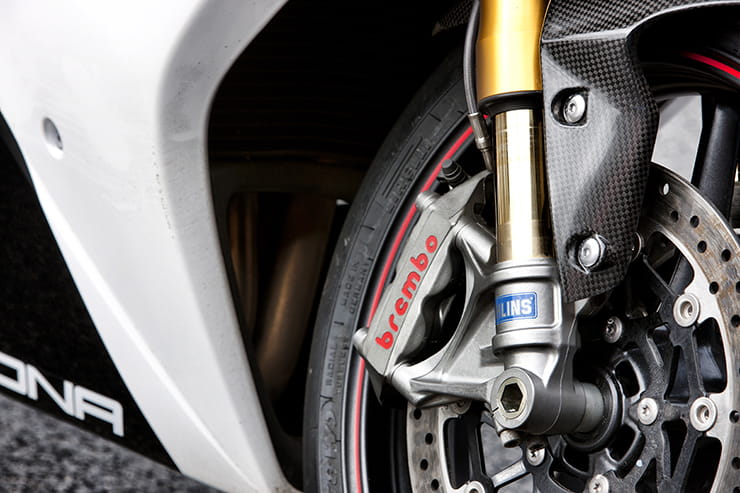 The Daytona is a sportsbike so you can’t expect it to be that frugal, however thanks to its low-revving engine economy figures in the mid-30s are possible. If you decided to take it on track this will drop dramatically - but that not exactly a surprise.

The standard Daytona is a brilliant handling bike that just destroys bends and is sublime on a twisty circuit and with its upgraded suspension, the R model elevates this ability to another level. Using the same chassis as the stock Daytona aside from a dash of red paint on the subframe, the R swaps the stocker’s Kayaba forks and shock for Öhlins NIX30 forks and an Öhlins TTX36 shock. Both are proper quality units (and fully rebuildable) and it is when you start to push on that you really spot the differences. With far more adjustability, a bit of twiddling here and there makes a huge difference and once set-up (it is well worth investing in getting this done by a professional) a 675R can be made absolutely staggering. And not just on track, there is a common misconception that Öhlins suspension is for track use – it isn’t. Quality suspension delivers a far more composed ride whatever the situation, so if you are a road rider only you will certainly spot the difference in ride quality delivered by the Swedish loveliness. When buying a used bike, just check the fork seals for leaks as Öhlins units don’t like to be sat around unused and also inspect the suspension linkages as they can seize up (a common Triumph issue) unless stripped and re-greased regularly. Triumph recommend every 12,000-miles but owners report this is too long, so aim for every four year at a maximum.

Another one of the R’s upgrades over the base Daytona sees its Nissin calipers swapped for Brembo monoblock units with a Brembo radial master cylinder, which bite with more ferocity. There is nothing that wrong with the Nissin calipers (all Daytonas get braided lines as standard) but you can’t beat a bit of Brembo bling! ABS was not an option, that arrived a year later on the upgraded model. 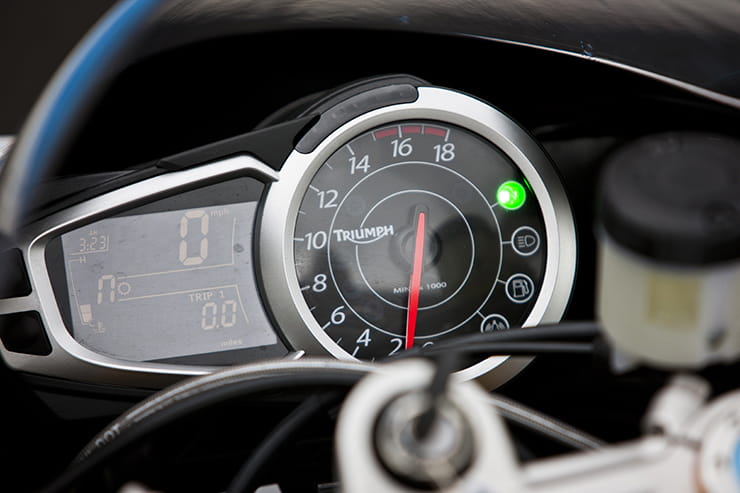 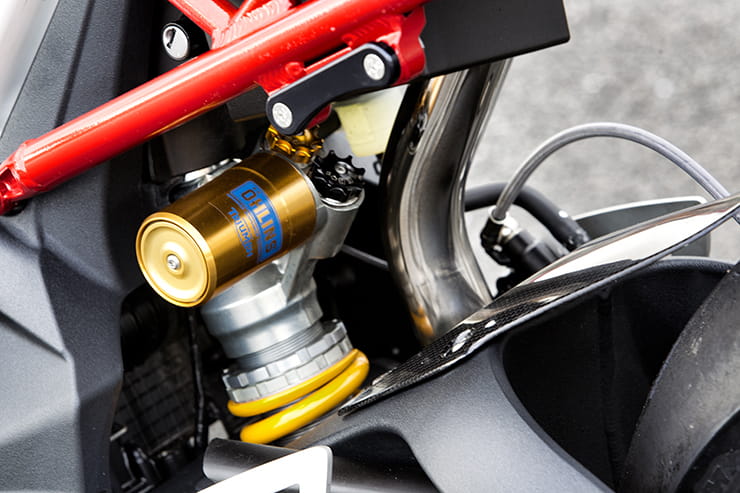 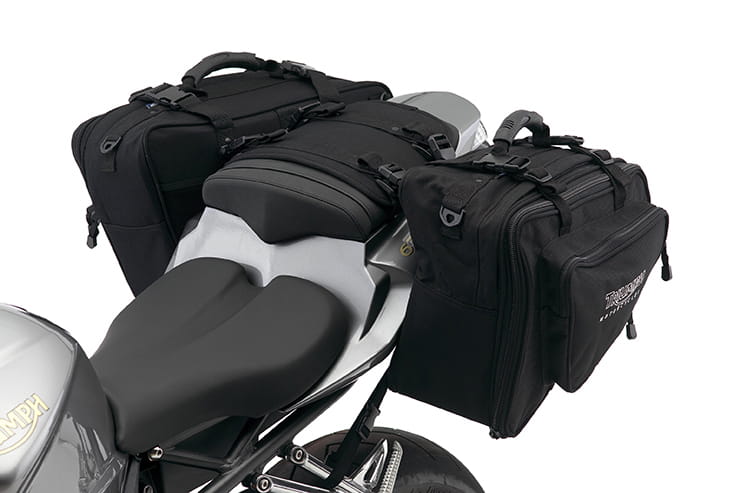 Err, does riding around Cadwell Park constitute touring? The Daytona is a compact, aggressive supersport bike and that means distance work isn’t a strong point. The seat is firm, the bars low, the pegs high and the OE screen fairly small. Fitting a double-bubble screen makes a bit of difference to the wind blast and rear sets can be set lower than the OE Triumph pegs, but the Daytona isn’t a bike to load up and take on a touring holiday, despite Triumph selling a range of soft luggage! Well, not unless you are on first name terms with an osteopath…

The R gets a quickshifter as standard (it is just Triumph’s official extras plug-and-play unit) as well as a smattering of carbon fibre here and there but that it is and traction control, ABS and any other rider aids are lacking. Not that aside from ABS you really require them on a supersport bike. In terms of accessories, Triumph sold a huge array spanning a full titanium exhaust system, performance cams and a race ECU for those wishing to take the R on track to Arrow Special Parts rearsets, more carbon panels, a gel seat and even a range of soft luggage for road riders. Very few are still available from Triumph direct, so if you want bling, buy a bike with it already fitted. 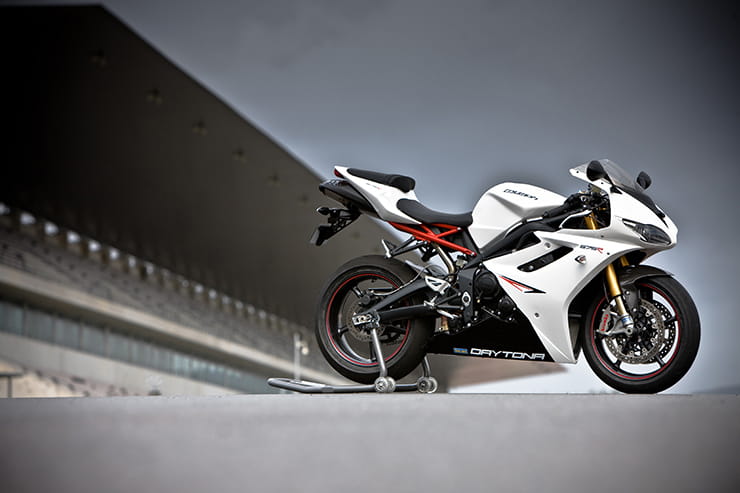 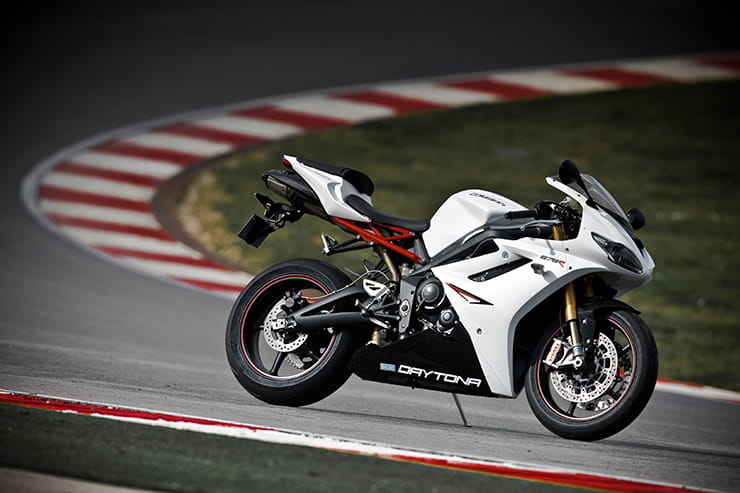 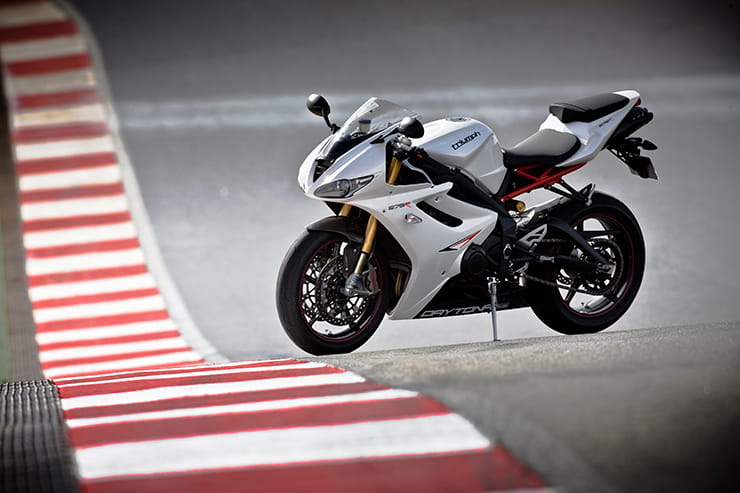 The Daytona 675R is a real gem of a bike that is sublime on the track and very good on the road. If you are after a supersport bike with a bit of showmanship, the older R model is just that touch more exclusive than the later one as it was only built for a single year and, arguably, the older underseat pipe bike’s looks are better than the low slung pipe model’s. It’s just a shame that prices are so high but exclusivity never comes cheap and it is still considerably less than a brand new supersport bike. 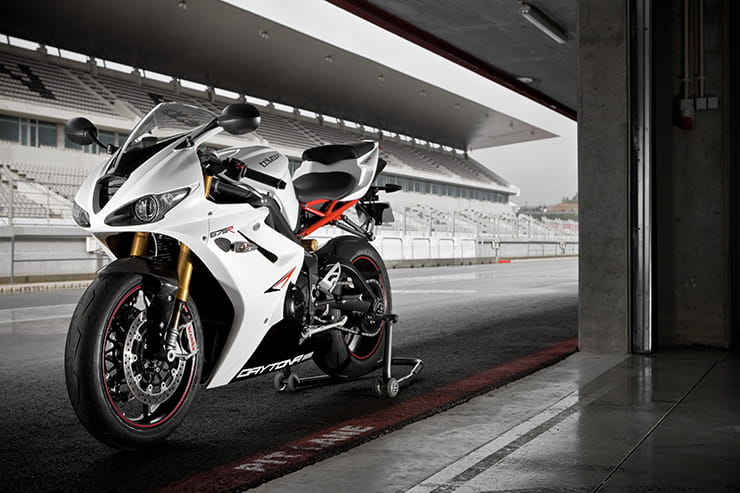 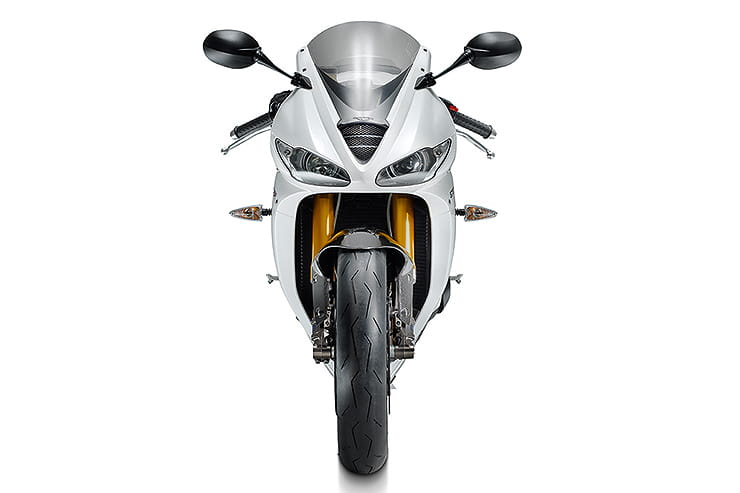 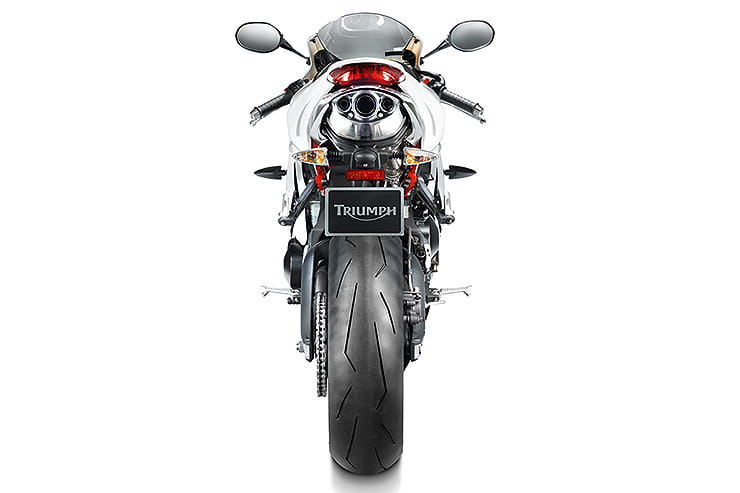