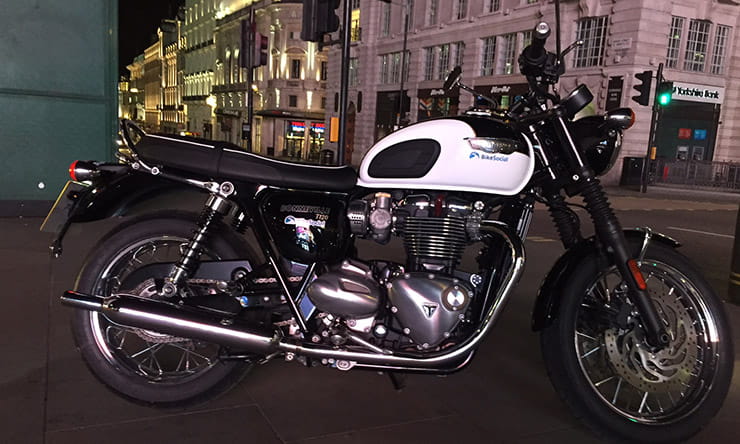 Each week our man Scott takes a new bike and tests it in real world conditions. This time he’s taking Triumph’s new-for-2016 Bonneville T120 on a midnight ride to the big smoke, as you do…

Triumph's Bonneville T120 oozes nostalgia. The attention to detail is painstaking in some areas, and borderline cheese in others. It’s a fusion of olde worlde looks and kerb appeal, mixed with the latest technology and fuel efficiency.

I came up with a plan to ride to London, at midnight, for no other reason other than I could. From Peterborough it’s an arrow straight ride down the A1. The tank was full and the on board computer gave me an indicated range of 156 miles. Then strange things started to happen. Because I wasn’t in a rush I decided not to bomb it, but plod along instead. Other road users were whizzing by, but life in the slow lane was where it was at. The fuel range responded to my gentleness and gradually my tank range increased, while my recorded miles went up. By the time I reached Black Cat, I’d bagged 40 miles on the trip yet my estimated range was now sitting at 200 miles. I knew that this trend would nosedive once I hit traffic, but with my route to London being an empty one I kept the 1200cc twin clicked in sixth gear and enjoyed the ride.

The gear ratios felt a bit out to me. Early ratios come and go too soon for you to be aware of them, though pulling away feels like you’re getting a gentle push off from an invisible hand, like it feels when you pull away in second instead of first, it’ll always do it, but there’s a split second where you want it to be a bit more instant. The redline is between 6,000 and 7,000 revs. Beyond this the electronics kick in and shut the door on you. With a quoted max power of 80bhp the T120 isn’t sluggish and with lack of rider comforts 70mph really does feel like 70, which I like. 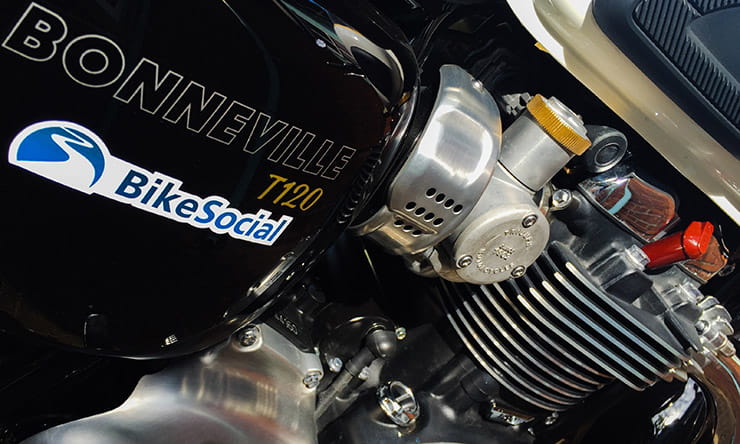 With the miles racking up, the night was still young. My addiction to increasing the tank range had consumed me, even if I hadn’t consumed loads of fuel. The traffic lights and roundabouts between Elstree and the centre of London meant that experiment was now over. The chill of the night air had lifted, so much so that I switched off the hot grips that come as standard kit, or at least I thought I had, instead I had maxed them out to the Hi setting, which I confirm is very toastie indeed. Why didn’t I read the handbook? Oh yeah, because men never do.

Anyway, back to the test. With a seat height of 785mm and a decent centre of gravity, slow speed moves are a piece of battenberg. The bars are quite low but, when you factor in the position of your buttocks, they feel higher than they are. The mirrors are useless, and no amount of fiddling found a happy medium, if anything I just made my rear view worse. The clocks are a bit confused. The traditional twin pod layout is classy, but the LED displays are small and a bit of an afterthought, although that said they never annoyed me. The brakes are happier in town, point and squirting between traffic lights you always have plenty of braking power to hand. When on the open road though that 224kg of rolling mass doesn’t feel so eager to haul up when the twin piston calipers up front get the brake fluid down their throats. The 310mm discs are plenty big enough, so maybe four pot stoppers would be the obvious solution going forward? The T120 comes with ABS as standard, though the lack of rain meant I never really felt its benefit.

The back streets of London allowed the T120 beat to bounce off the historical fascias that grow skywards. The T120 does sound well. It’s not in the Harley league, where Triumph might need to patent to exhaust tone, but considering it’s breathing through emission friendly silencers I reckon one that was allowed to breath more easily would sound epic.

Sat on Chelsea Bridge, waiting for a cuppa to be made, I admired the Bonneville from afar. Like how you watch your other half walking towards you, you obviously know what they look like but you see things differently. The T120 is more than a sum of its parts. It looks the part. I had noticed how car drivers do a double take at it, it’s got soul.

With the sunrise less than a few hours away I decide it’s time to get out of town, and instead of riding home I opt to head for the M1, to drop the bike back at Triumph HQ.

Hinckley is around a 100 miles from Chelsea Bridge, and once I’ve got to the start of the M1 I employ operation slow lane, to see how far I can nurse what remains in the badger coloured tank. My digital display implies that there’s around 80 miles, but by the time I hit the M1 that’s plummeted to less than 40. The last thing I want to do is run out of fuel. That would be daft, but I’m too much of a non conformist to get petrol at the first of several service areas along the M1.

The M1, unlike the A1 hours earlier, is busy. It’s Monday morning, the night sky is black to my left, but to my right daylight is striking up behind the clouds. By the time I reach the M25 my tank range is increasing, my steady progress reaping me rewards. From 40 miles I’m now being teased with a figure that’s 20 per cent up on that. Could I get the Ton Twenty back to Triumph without a refill? The answer to that is, of course, no. I had to pit and chuck a few quid in. The cold light of day made me realise it was just too much to ask. The hot grips went on to help warm my hands, and suddenly I felt very tired. The 15 litres of petrol and my tortoise approach to riding had returned me 200 miles! That’s around 70mpg.

Peeling off the M1 and picking up the A5 allowed me to dance with the gear lever along through the  countryside. I even hit the rev limiter for the third time, just because I could. The T120 lapped it up. It reminded me how versatile this Hinckley bike really is. We’d had a spin around London, received admiring glances, I’d not once felt uncomfy and even my hands hadn’t got cold. The biggest thing that stands out is how user friendly this bike is. That term ‘born again biker’. I’ve never been a fan of pigeon holing people but this bike is perfect for anyone who loves riding a bike, not because they need to, but because they want to.

After spending the whole night with the 2016 T120 Bonneville I carried these memories of its character away with me. The build quality looks solid, painted parts are well coated. The chrome looks deep, giving you reflections of yourself at every angle. Suspension never gave me any issues, even two up. The ruts of the inside lane of the A1 and M1 couldn’t upset its progress. The rear suspension units do a good job and forks gave me no reason to feel negative. The single headlamp lit the darkness of the night with no bother. I’m 6'3" and don’t miss many dinners, I was totally comfortable at all times. Could the T120 use a fairing? It's a question I toyed with and, despite the benefits of weather protection, I feel that Triumph have been right not to load the T120 with one.

I had thought the bike could use a centre stand, but realised the morning that I handed it back at Hinckley it does have one fitted!

I enjoyed my time with the Triumph. Would I look back at it? Yes, every time. There’s not a single bad angle on the T120.

The day light? No idea what that’s about, worse not realising I was riding at night and not on full wattage.

Switchgear, clumsy, less is more where switches are concerned.

Gaiters. The fork gaiters just add that finishing touch to the voice of this bike.

Looking for bike insurance? Get a Triumph motorcycle insurance quote with Bennetts today! 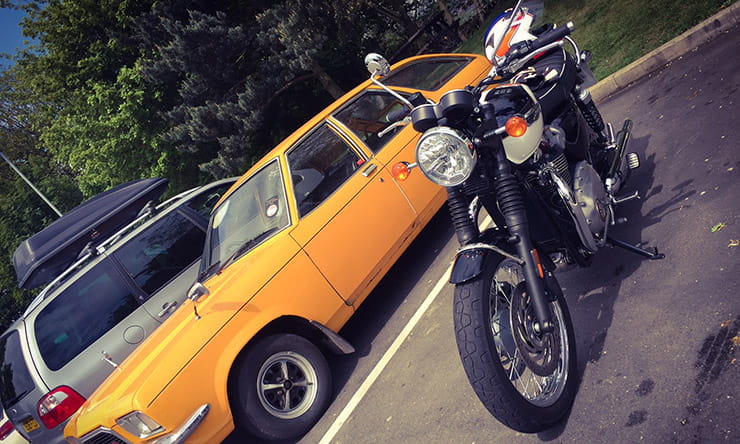