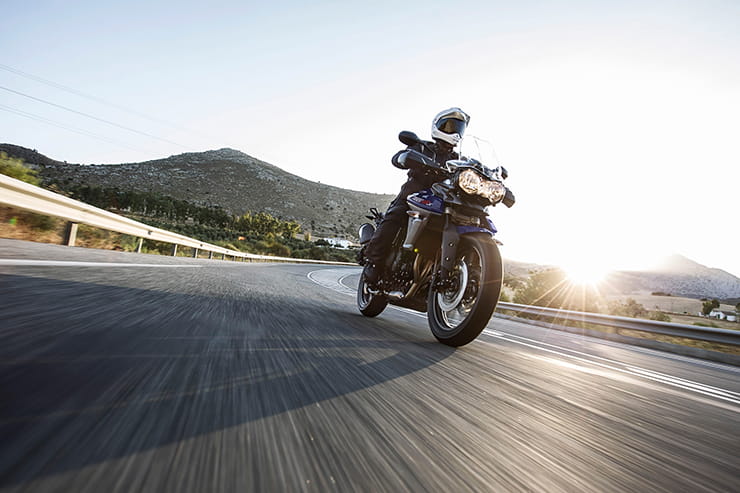 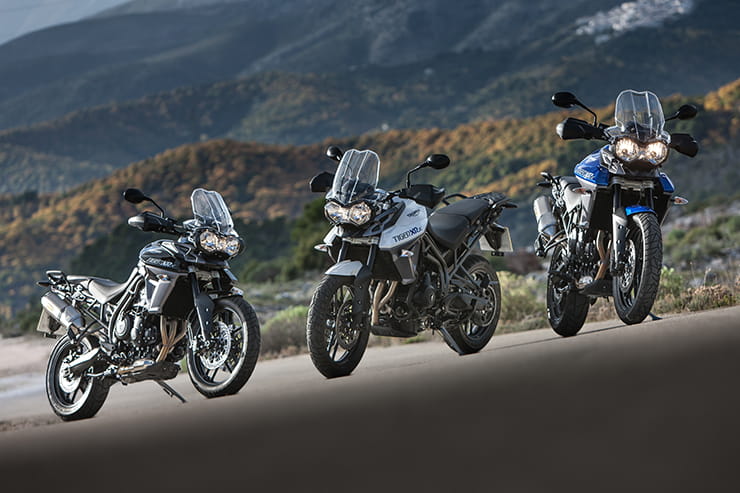 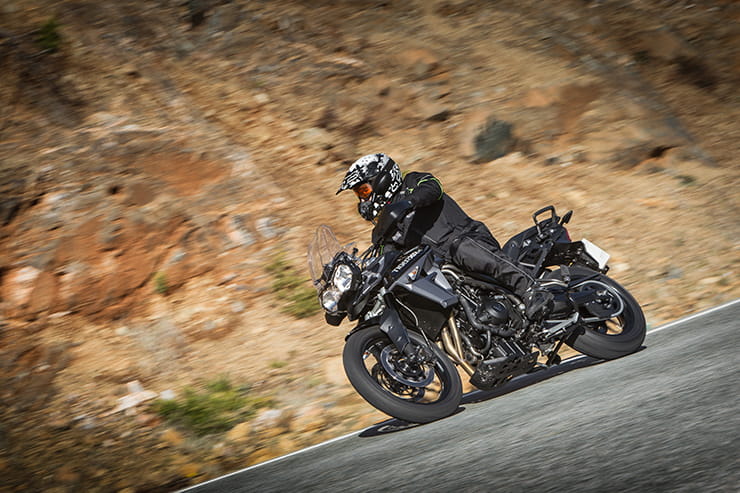 First released in 2010, Triumph’s middleweight Tiger 800 range of bikes very quickly established themselves as great options for those wanting to tour on an adventure style of machine but not wishing for the associated weight of a bigger capacity model. After becoming Triumph’s best-selling model in Europe, the range expanded and evolved in 2015 to include four new versions in its second generation. Although technically only two are actually new, the others are variations on a theme. Splitting the Tiger 800 into a more road-focused XR model and an off-road targeted (light off-road it has to be said...) XC model, both versions gained higher-spec x models to tempt riders to part with even more cash. If you are interested by the thought of a middleweight adventure bike powered by a spirited triple motor, the Tiger 800 XRx looks rugged but is a better road bike than its XCx sibling thanks to its smaller diameter front wheel.

When new the XRx cost £1000 more than the standard XR model, so you have to expect to pay a few quid premium in the used market as well. The good news, however, is that most used bikes are the x version anyway, so you aren’t limited on choice. You can get a base XR for £5500 but to get the x you need to expect to pay closer to £6000 for a well-used bike or £6500 for one with less than 20,000 on its clocks. Aim to wade in at this point and you should locate a mid-teens mileage XRx with full luggage, which is just about all you need. You can push the boat out and get a later one for about £7500, which is the top end of the price bracket, but really there is no need.

The Tiger 800’s engine is a long-stroke 675 triple, taking its capacity up to 800cc. By increasing the motor’s stroke, Triumph ensured that rather than top-end power the triple produces mid-range torque, which is exactly what the power figures of 94bhp and 58ft.lbs of torque back up. To ride the triple feels full of enthusiasm while also packing a good mid-range thrust that means taking a pillion isn’t out of the question. On twisty roads you can release a bit of its sportsbike heritage as you rev the triple to 10,000rpm and swap between gears while on more mundane stretches it is relaxed and refined, which is exactly what you want when cruising in top. Flexible, great sounding and frugal, it’s a lovely motor and also very reliable.

In its second-generation Triumph refined and improved the 800cc triple while also adding a bit of clever tech. Inside the engine mechanical noises were reduced and the gearbox’s action made slicker, two areas highlighted as weak by owners of the first Tiger 800 model. An all-new ride-by-wire throttle was then added to improve fuel consumption and also allow Triumph to add power modes, traction control and boost its fuel economy, again an area owners did grumble a bit at. Even with its new throttle system a few owners have hot start issues with the XRx, which seems to be cured by updating the fuel map to a custom one or even one for use with a free-flowing exhaust system, although this isn’t recommended if you are still running the OE system with its catalytic converters within. If you are suffering, go for a custom map and set-up from a reliable dyno house. Service intervals are every 6000 miles with the valve-clearances checked every 12,000 miles, which isn’t to be skipped according to owners as they do quite often need adjusting, so always check the bike’s service history. Weirdly, the rubber guide that protects the chain from hitting the swingarm seems to wear out quite quickly. It is a serviceable item but if the wear goes too far the chain can mark the swingarm, which is annoying. Replacing it is fairly simple (there are online guides) and it’s not an expensive part. Always watch out for any fault codes on the dash because unlike the previous model, which was fairly basic in terms of its tech, the 2015-onwards bike does up the ante and that means more electrical items to go wrong and if they do you are looking at a big bill. 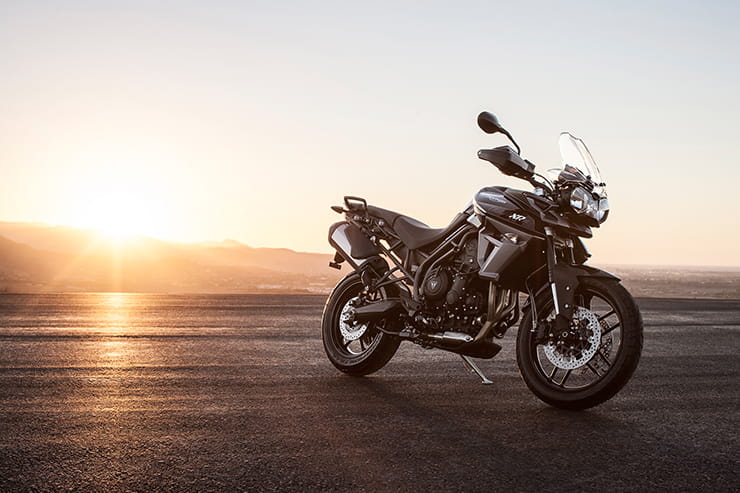 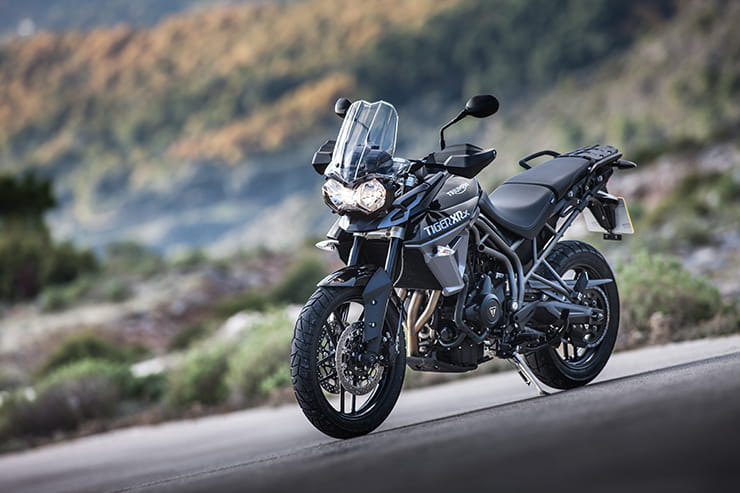 Triumph claimed that the updated motor with its new fuel system could deliver 17% better fuel economy, which equated to 65mpg (up from a claimed 55mpg before) and that the 19-litre tank could see you covering distances of up to 272 miles. In practice the numbers are closer to a genuine 55mpg with a 210-mile range but that’s still not bad at all.

The XR version has cast wheels with a 19-inch front and 17-inch rear where the XC comes with a 21-inch front item with a 17-inch rear and are a spoke design, which does make a difference to how the bikes feel on the road. If you have no interest in off-road riding, and not many adventure bike riders do, then the XR is the better option as the smaller diameter wheel is wider and gives a far more assured feeling from the front end in corners. Also, the XR’s seating position is lower, which shorter riders will appreciated – although taller ones can increase the seat height from 810mm to 830mm should they wish (there is also a shorter seat option of 790-810mm). Triumph called the XR a ‘sports adventure bike’ and you can certainly enjoy the corners on it, especially with more road-targeted adventure tyres fitted. The forks strike a nice balance between comfort and support when you up the pace and while they aren’t adjustable, they work well enough for 90% of the time. And the same is true of the shock, which only gets preload to adjust to help compensate for the extra weight of a pillion/luggage. Tipping the scales at 216kg wet, the Tiger is pleasingly manageable at low speed and the triple is a narrow motor, meaning your legs are closer together as the bike’s waist is thin, making the reach to the ground feel even less. As on any older used bike, inspect the suspension linkages for grease (they should be rebuilt every 12,000 miles but seldom are), the bearings for play and the wheel rims for dings but again, generally the Tiger is a solid bike. The x model gains a centre stand, which is helpful for routine maintenance, which the base XR model lacks. It’s available as an aftermarket option from Triumph, so don’t worry too much if you buy an XR without it!

ABS (non-angle-sensitive) was standard on all the 2015 Tiger models, however the x versions take it one stage further. Where the base model’s ABS can be turned off for off-road use, the x bikes have a special ABS mode that allows the rear brake’s ABS to be disengaged yet the front system to still be active with a degree of slip before the ABS comes into action. More use on the off-road XCx than the XRx, it is always nice to know it is there if you require it for crossing a campsite’s wet grass... Unlike modern Tigers, the 2015 bikes only get fairly basic two-piston sliding calipers at the front, which are ok but not exactly ground-breaking in their performance. They are prone to seized sliders due to corrosion but pleasingly come with braided lines as standard, which is good. 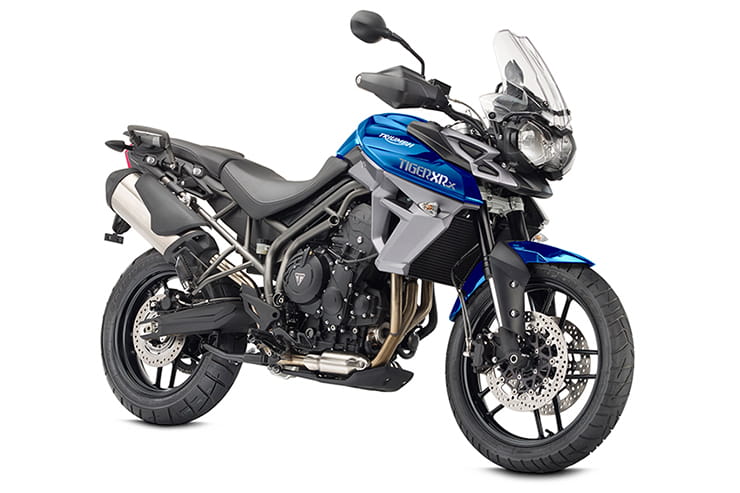 If you are over six feet tall the Tiger’s seating position can feel a little compact (you can adjust the bar’s position) and the screen, which is adjustable in its height, is a touch short, allowing the wind to buffet your helmet. That said, the Tiger does make a really good touring bike and the x comes with a few extra creature comforts such as cruise control, hand guards and rider and pillion ‘comfort’ seats alongside an extra 12v power socket (you only get one on the base bike) over the standard XR. So yes, it’s a good tourer but you may wish to invest in a few extras...

Starting on the technology side, the XRx gets switchable ABS (with extra functions over the XR), switchable traction control and four throttle maps – Rain, Sport, Road, Off-road – alongside three riding modes (Road, off-road and Programmable). The throttle maps alter how the throttle responds while the power maps alter the ABS, traction control and map settings in one hit. In Programmable mode you can set your own choice of ABS, TC and throttle map. Unlike the base XR, the x gets cruise control as standard alongside a trip computer, which adds journey time, average speed, average fuel economy, fuel consumption and range until empty to the standard bike’s dash display, which has a fuel gauge and gear indicator. In terms of accessories, hard luggage is a very good extra and Triumph’s own aluminium panniers and top box are very popular alongside heated grips and a taller screen. A few owners go for aftermarket seats and replacement end cans but in general Tigers are left pretty standard with only crash protection another common addition alongside an auto chain lube system.

The Tiger 800 XRx strikes a nice balance between the fairly analogue first generation of Tiger and the quite tech-heavy latest model. You get a good array of assists that are genuinely helpful but not too many as to make you worry about things starting to fail on an older used machine. If you want a lighter adventure bike with a bit of character, the XRx is the pick of the bunch and at £6000 represents good value for money.

Three things we love about the Tiger 800… 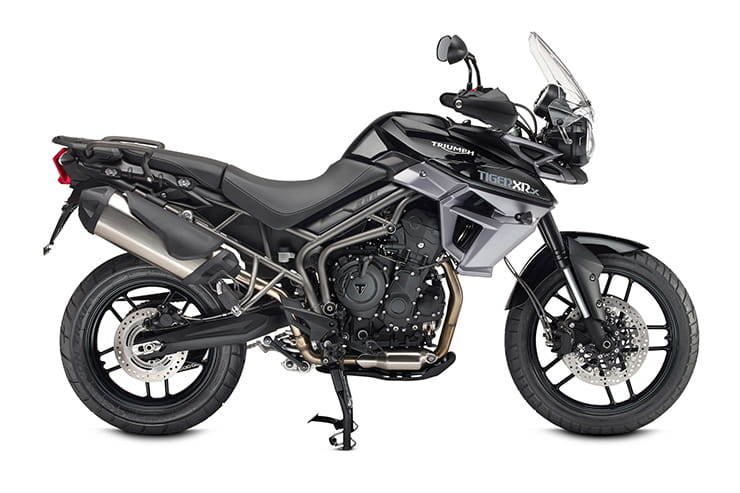 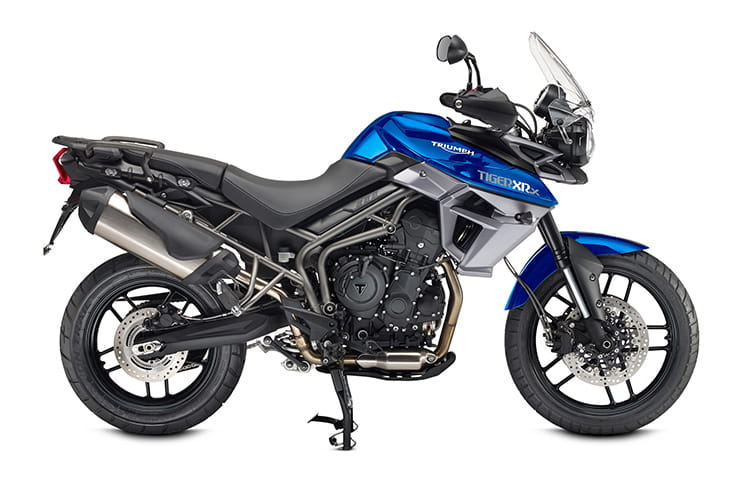