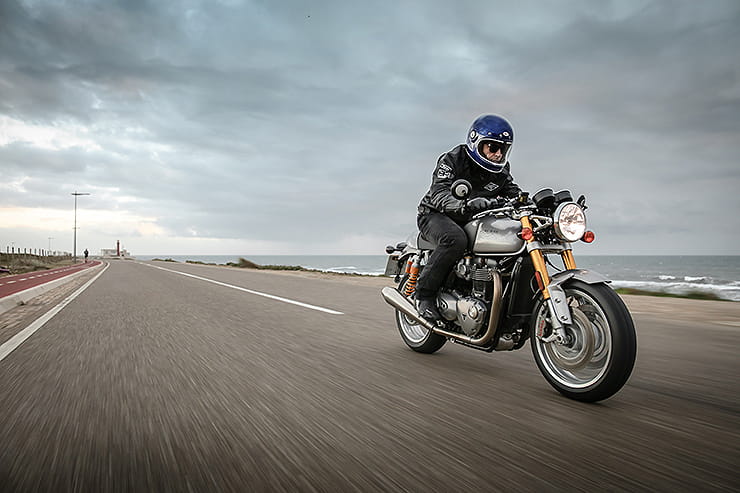 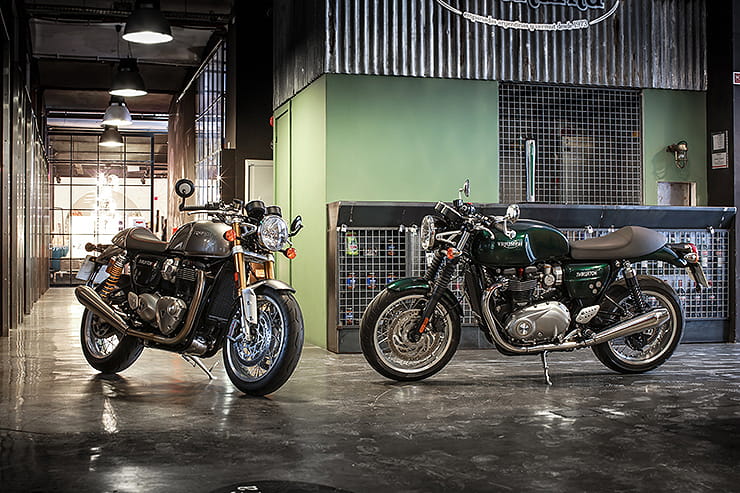 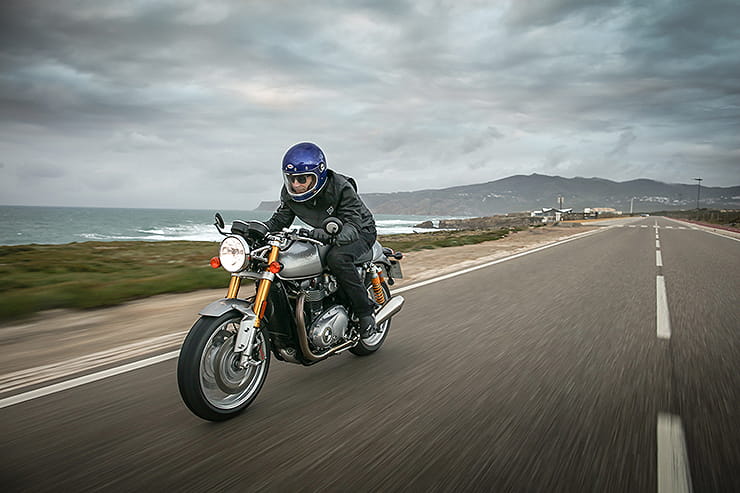 Something ‘Hinckley’ Triumph does extremely well is making eye-catching bikes that manage to capture all of the flavour of the firm’s heritage models yet do so without compromising on their ride quality. Take the Thruxton models as a perfect example. Launched in 2016 in basic and higher-spec R guise (both now replaced by the RS model), the Thruxtons took the T120 parallel twin engine as a base (tuned for more power) and formed around it a retro racer with a wonderful attention to detail that purists would appreciate and new buyers be drawn towards. From the Monza-style tank cap to the spoke wheels and the bullet seat, the Thruxtons have it all. Yet far from just looking pretty, both arrived with modern electronics in the shape of ABS, power modes and traction control as well as thoroughly up-to-date handling. Even more so in the case of the uprated R with its higher-spec suspension and Brembo brakes. Although not the most comfortable of bikes (if you want retro comfort, check out the Speed Twin), the Thruxton models are very appealing as they handle impressively, go well and look stunning. Not only that, they are also ripe for a bit of customisation...

In 2016 the Thruxton cost £10,400 while the R version upped this to £11,700. Nowadays prices for the base model start at £7000 in a dealership for an early bike and rise to a maximum of about £8500-£9000 for a late model. Not as popular as the R, you can bag a bargain on the lower spec one so be prepared to haggle. If you want an R you need to look at paying a minimum of £7500 for one with approaching 10,000 miles on its clocks or £8000 for one with closer to 5000 miles. The top end is roughly £10,500 but that will be a bike with a few tasteful Triumph official accessories such as the half-fairing or full exhaust system. The Thruxton was a popular bike so is quite plentiful in the used market and colour doesn’t seem to affect its price tag.

The parallel twin HP (High Power) engine was introduced on the Thruxton models and is identical in both the base bike and R. Effectively a T120 HT Bonnie motor (which is called the High Torque engine by Triumph) the HP version features a lighter crank, higher compression ratio and unique airbox. This ups its power from the HT’s claimed 79bhp to 96bhp with torque figures of 82.6ft.lb where the HT has 77.5ft.lb – although it has to be noted the Bonnie engine delivers its torque lower down the rev range. Far from a rev-happy engine, the HP retains all the lovely drive and mid-range you get on the HT but adds in a bit more urgency, making it feel perfectly suited to its new racy guise. The parallel twin has a beautiful soul to it and there is a nice dose of vibes to make it feel alive yet remains ultra-refined with a beautiful throttle connection. Although not as good for pillions as the HT engine, neither is the Thruxton’s pillion seat, so that’s not an issue!!!

The 1200 parallel twin was introduced on the T120 models in 2016 and it has a very solid reputation for reliability. Despite the fact the HP version makes more performance, there are no major worries and recent TFT (Triumph Factory Custom) bikes and Euro5-compliant models have pushed it further than in original HP form so all should be well. Also, very few used Thruxtons have gone over 10,000 miles, so you can buy with total confidence. The motor may be all-new but it is quite old-school in its design and only has a single overhead cam and that means servicing is quite cheap. Triumph state 10,000 mile intervals (or yearly) with a minor service likely to set you back about £200 with the valve-clearances at 20,000 miles upping the bill to the £600 area. An annual oil and filter change should be about £150. Technically the fuel lines should be swapped every four years as well as the coolant every three years and brake fluid every two. If it goes to an official Triumph dealer this will almost certainly be done but if it goes to a non-official Triumph mechanic these things may well be skipped so check where it was taken by looking at the service book. Owners report the gearbox, although a bit clunky (just like the original British bikes...) is solid and the OE exhaust is also well finished. A lot of owners upgrade the exhaust end-cans to give the bike a better exhaust note. This does little to enhance the power as the catalytic converters are situated before the end cans, but it does make the bike sound even more glorious. 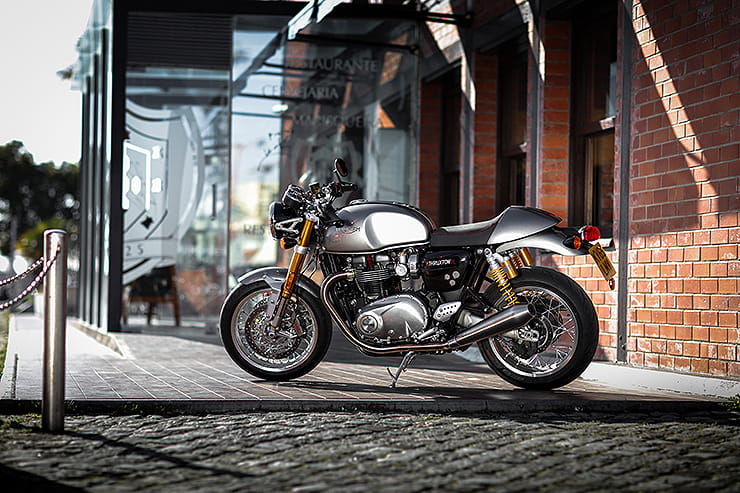 Triumph claimed the Thruxton could average 61mpg, which equates to roughly a 180 mile range from its 14.5-litre tank. Owners report that a figure closer to 50mpg is a bit more realistic so you are looking at seeing the fuel warning light after about 120 miles and a range of just over 150 miles. Ride it gently, however, and you can reach high 50s mpg figures with a bit of throttle restraint. But where’s the fun in that?

The Thruxton is a café racer and so you would expect it to handle – and you won’t be disappointed. An impressive bike in the bends, both Thruxton models share the same frame and swingarm (the R gets a clear anodised finish on its aluminium swingarm) but the base bike has slightly lazier geometry and conventional KYB forks with no adjustment and twin KYB shocks with only preload to fiddle with where the R gets fully adjustable Showa BPF forks and Öhlins shocks. On the road the R feels the sportier of the two bikes (it also has uprated brakes) and it is set firmer on its suspension than the base model, which can lead to a slightly less plush ride. The upside of this, however, is that it is more planted and assured when you increase the pace and with its full adjustability you can always tweak the settings to make it more compliant. A narrow bike, the Thruxton is very easy to get on with at slow speed and its low seat height (the R is 5mm taller) means you can easily get both feet on the ground while its 206kg weight (dry, assume roughly 220kg wet) is very manageable thanks to a low centre of gravity. When buying used a fair few owners grumble about the quality of the finish on the metal parts, so check well for corrosion, especially on the ‘carbs’ and engine cases. Overall, the finish is good on the Thruxton but small details do let it down slightly. If you want to make your base bike a bit sportier, changing the tyres from the OE Pirelli Angel GT to the R’s sportier Rosso Corsas gives it a bit more agility.

With ABS and braided lines as standard, the main difference between the R and the base bike is the R’s Brembo monobloc calipers, which are matched to Brembo discs and a Brembo master cylinder. Noticeably upping the stopping power when compared to the base model’s two-piston sliding Nissin calipers, a few owners grumble that they can lose their bite after a while, which is odd. The best solution seems to be a change of brake pad as Triumph went quite conservative with the friction material. In fairness to the base bike, you don’t really ride it to the point that its more basic brake set-up becomes an issue. 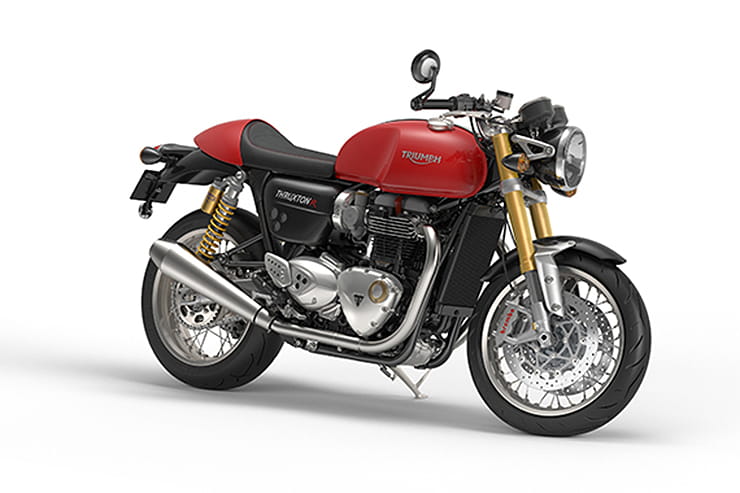 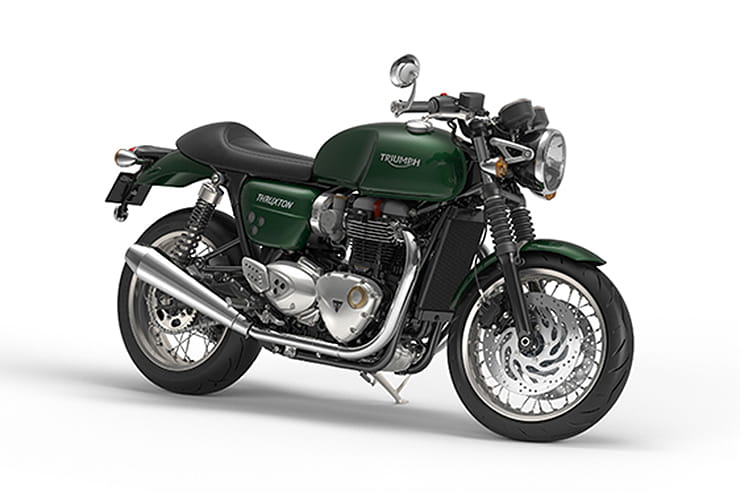 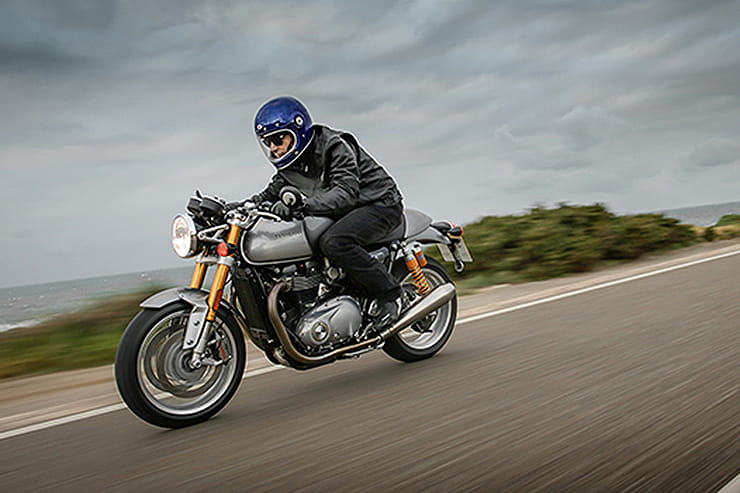 The Thruxton isn’t too extreme in its riding position and the bars are clip-overs rather than clip-unders (the top yoke), so you can rid one for reasonable stretches without being left in too much discomfort. The seat isn’t that forgiving, and pillions certainly won’t be too happy as the pillion seat slopes backwards and is tiny but for solo days out it is fine. If you want to tour two-up, look at the Bonneville T120 models (very relaxed) or the Speed Twin (a bit more exciting and better handling) as they are far better suited to the job. Or you can buy the accessory dual seat from Triumph for the Thruxton. Interestingly, the R lacks any vibe-damping rubber on its pegs, which the base bike comes with.

When it comes to rider assists, you get three power modes – Road, Rain and Sport – as well as switchable traction control and ABS. The Thruxtons also have a torque-assist clutch, LED lights, a USB charge point at the headstock and an inbuilt engine immobiliser. Pleasingly, all are neatly tucked away so as not to ruin the overall retro look. And then there is the accessories range...

Launched alongside over 160 accessories, you can buy a massive selection of parts with which to customise your Thruxton model. Triumph sold three ‘inspiration kits’ which were dealer-fitted items that gave unique looks. There was the ‘Track Racer’, which cost £1620 extra and included a half-fairing, clip-ons, mudguard removal kit, LED indicators, Vance & Hines slip-on silencers, knurled bar grips, leather tank strap and seat cowl (standard fitment on the R, an option on the base model). The ‘Café Racer’ was £1295 and included a mudguard removal kit, V&H slip-ons, clip-on bars, flyscreen, LED indicators, rubber knee pads, knurled grips and a seat cowl. And finally, there was the ‘Race Kit’ which never really appeared and was intended for track use only with a performance cam, de-cat exhaust and free-flowing air filter.

Outside of these kits a fair few aftermarket companies make parts for the Thruxton and owners do like to add trinkets. Generally official Triumph parts (especially the half-fairing and exhaust) add to the bike’s used value. Avoid heavily modified bikes unless they are official Triumph parts and always test ride a bike before you buy it – clip-ons may look cool but they don’t suit everyone and they do make it quite uncomfortable to ride.

The Thruxton is a really beautiful bike in more than just its looks. Just about staying the right side of sporting with its riding position to ensure it is enjoyable to ride on the road, the parallel twin engine has loads of spice and both sounds and feels in a way that stirs your emotions, which is what you want on a modern retro. Blessed with impressive handling and a good amount of (hidden...) modern tech, there is little not to like. And while the higher-spec R model grabs the attention, in many ways the less-flashy lower-spec model is just as appealing as it appears more authentic with its conventional forks and brakes. 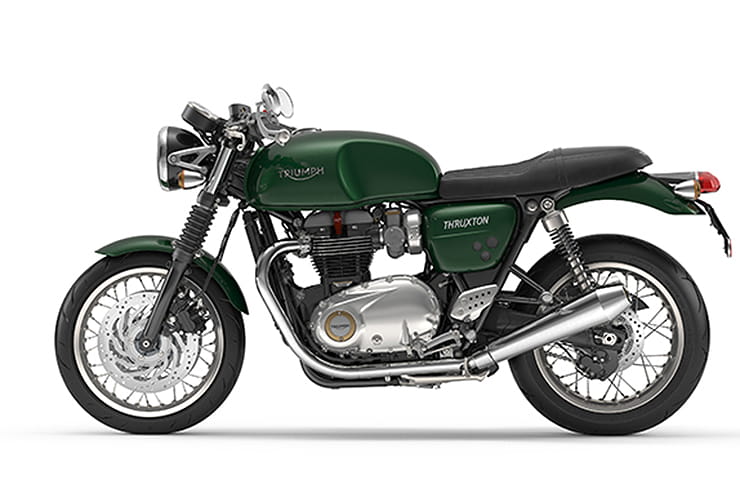 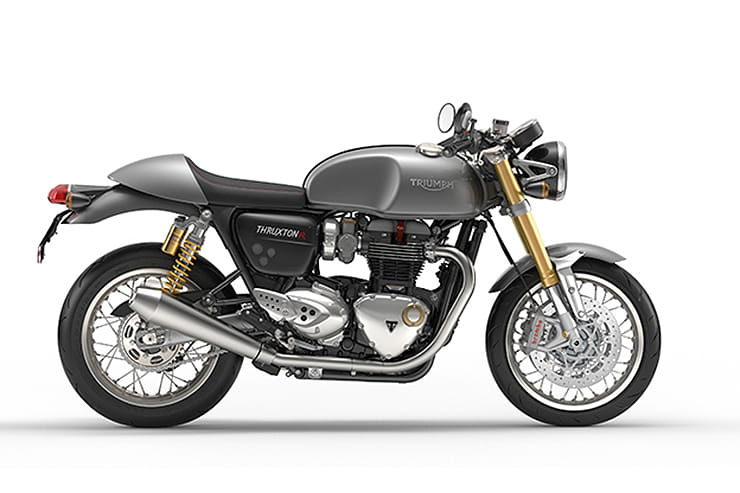 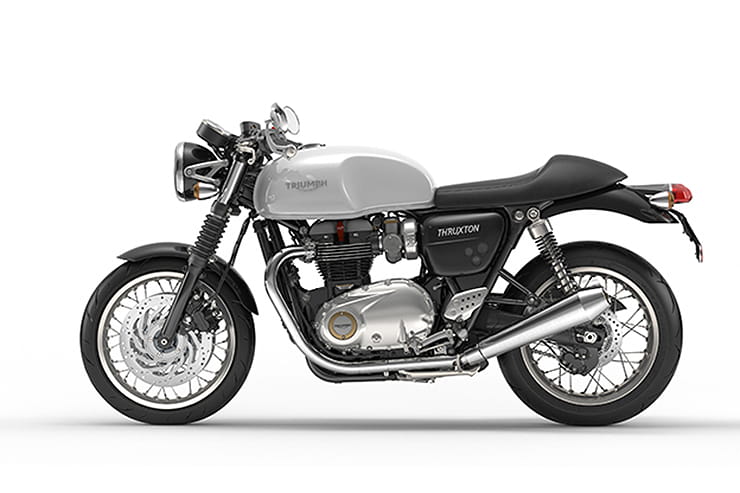 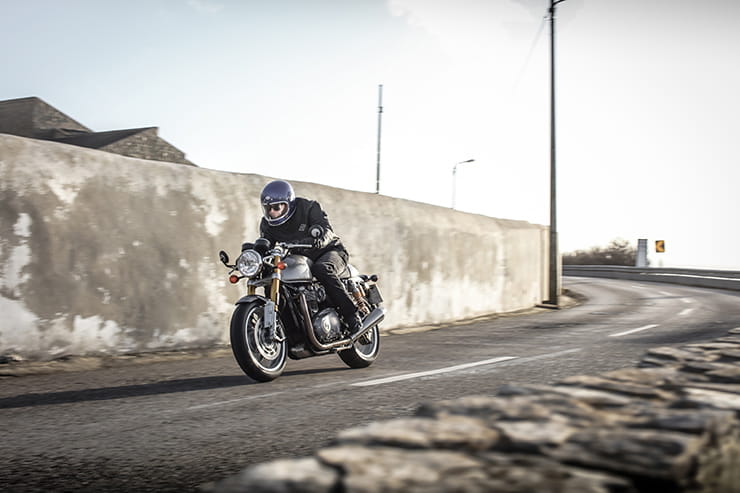