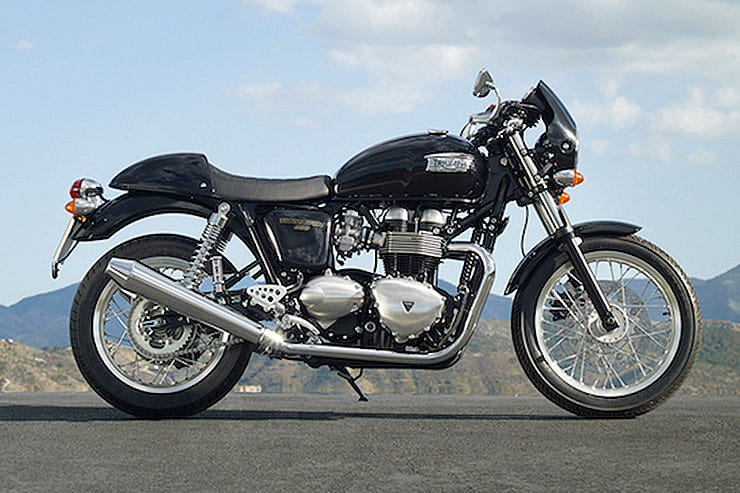 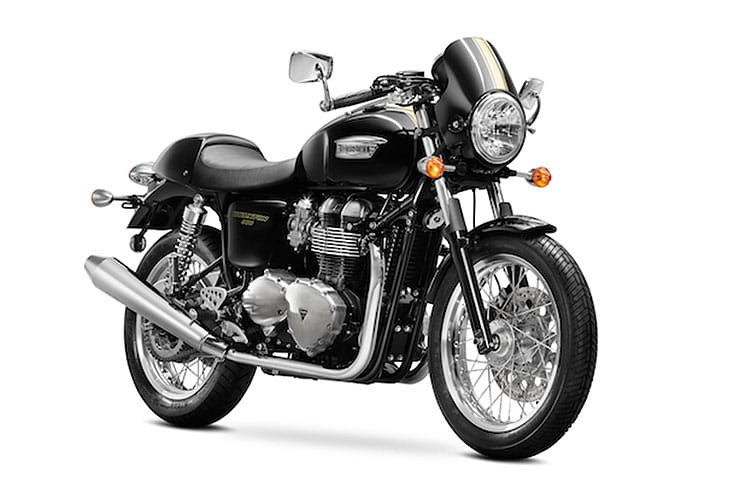 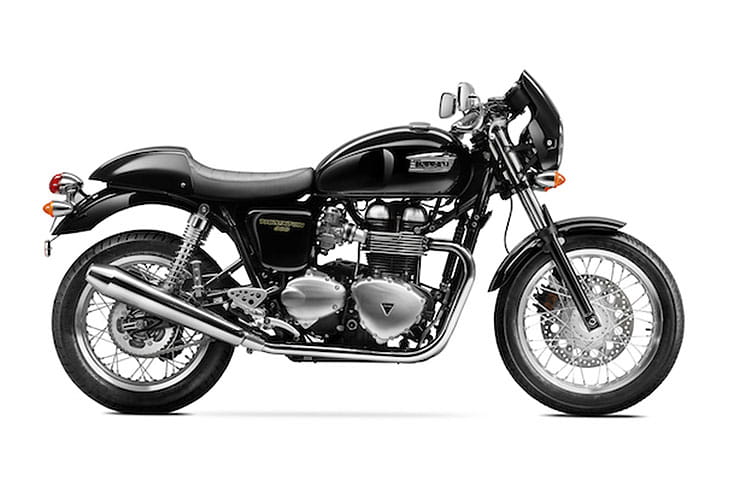 The Thruxton was originally launched in 2003 as a café racer version of the 2001 Bonneville retro roadster. As such it was inspired by the ‘rocker’ bikes of the 1950s and ‘60s, mimicked those bikes’ more racy riding position and (slightly) enhanced performance yet underneath it all was still a fairly soft, novice-friendly middleweight twin.

It proved such a success it survived right up to 2015 by which time its retro café racer formula had been mimicked by numerous rivals such as BMW’s R nineT and Ducati’s Scrambler. Its biggest update came in 2008 when production switched from the UK to Thailand and the 865cc engine became fuel-injected and in 2016 it was replaced by an all-new 1200cc Thruxton.

With larger all-round proportions, 90bhp and more sophisticated chassis component the new Thruxton is a genuine performance bike that makes the original seem soft, slow and basic. However, with used prices now as low as £4500, generally solid reliability and, if looked after, decent cosmetics, the original 900 still makes an accessible, charming and entertaining café racer styled bike that’s useful, eye-catching and a great basis for further customisation.

The first-generation Hinckley Bonneville was never expensive, being conceived as an accessible, novice-friendly machine, and the same was true of the Thruxton 900, costing only a couple of £100 more.

Even during its final incarnations, in 2013, at £7,699 the Thruxton, although a little basic, offered good value for a taste of yesteryear with the engineering reliability of modern-day machinery. It is worth pointing out, however, that the 900’s all-new successor in 2016, even in base form, is far more sophisticated and now costs from £11,000. While the latest top-spec 1200 Thruxton RS boasts 105bhp, riding modes, sophisticated Ohlin’s suspension, radial monobloc Brembo brakes and more – but costs over £13K.

By contrast, a used, decent quality albeit fairly basic original Thruxton 900 can be had for as little as £4500. 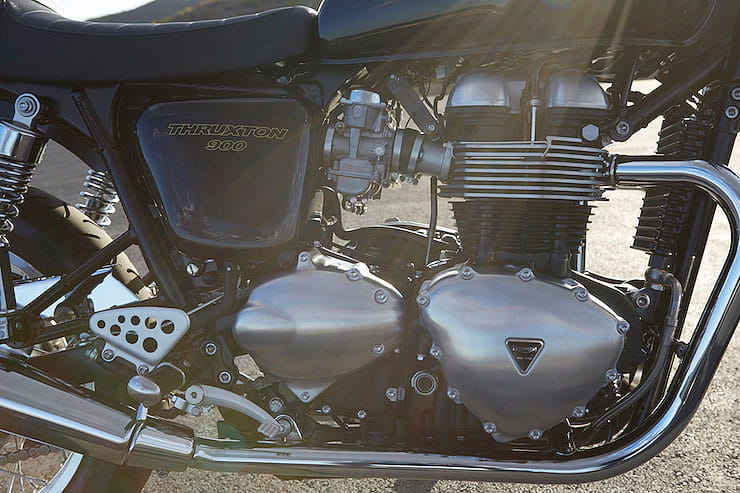 The Thruxton’s enlarged motor produces a healthy 69bhp, which is well up on the Bonneville, Scrambler or Speedmaster’s power output from essentially the same mill. That, allied to the 69 Nm (or 50.9 ft-lbs) of torque on offer, means the engine has enough about it to pull you along pleasantly. Ok, so it’s also heavy and it lacks the significant torque and power some like to feel with a twist of the right grip. The Thruxton doesn't have the punch some may think a big twin should have, nor has it as much as the newer 1200 version so it won’t frighten you with its speed. But it does offer enough to warrant its sporty-ish riding position.

Although based on the then standard, 790cc air-cooled parallel twin from the Bonneville 800, the Thruxton’s engine was given a significant makeover by way of larger pistons taking capacity up to 865cc, new camshafts and exhausts and rejetted carbs, together giving a healthy peak power boost of 13%.

Up to 2008 the Thruxton had a carb-fed motor, but upon moving production from the UK to Thailand, fuel injection was added at the same time.

Transmission is via a slick five-speed gearbox, so slick in fact that the clutch can be ignored from second to fifth and back again if you match the engine revs and offer a token gesture of a shut-off throttle.

The standard exhausts are fairly muted prompting many owners to replace them with aftermarket items or even Triumph’s own ‘TOR’ (Triumph Off Road) versions, which sound particularly sweet.

Reliability is generally excellent, as long as looked after and serviced regularly although many owners recommend taking particular care of the engine cases in winter while many also get the later, fuel-injected bikes remapped which can boost performance and response significantly. 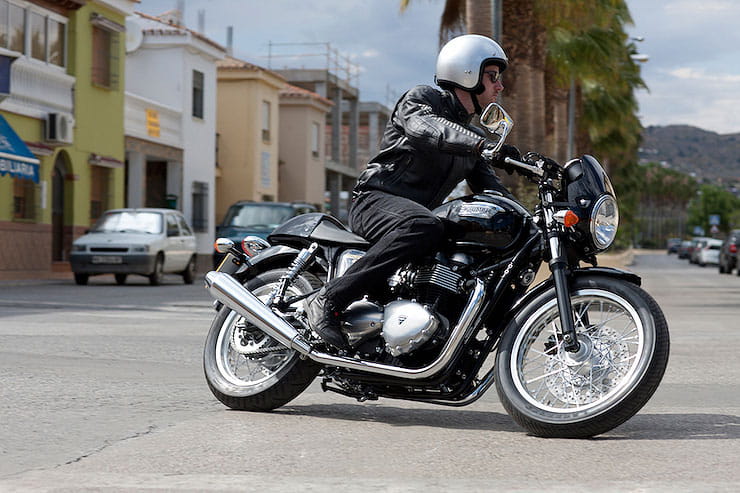 Although larger capacity than the 790cc Bonneville twin on which the Thruxton engine is based on – and also higher performing, the Thruxton 900 is still ‘merely’ a fairly gently performing, sub-900cc twin, so it’s fuel consumption rates aren’t at all bad. That said, however, Triumph machines of the era, of any type, were notoriously thirsty. On balance expect around 45mpg on average, depending on usage, which, combined with its fairly small 16-litre fuel tank, returns a tank range of around 160miles.

To turn the Bonneville into the Thruxton, along with the enhanced engine, the chassis gained longer twin rear shocks to change the posture of the bike and help make the steering quicker. The forks were also upgraded slightly. These, combined with the Thruxton’s sportier riding position helped make Triumph’s café racer a pleasing handler – modern Triumphs have a deserved reputation for decent handling, after all – although, with only basic suspension adjustments, an old fashioned tubular steel twin loop frame and twin rear shocks, it’s still nowhere near as sharp and sophisticated as a dedicated modern sports machine. Some owners criticise the suspension for being a little soft while, despite appearances to the contrary, it’s also quite heavy. 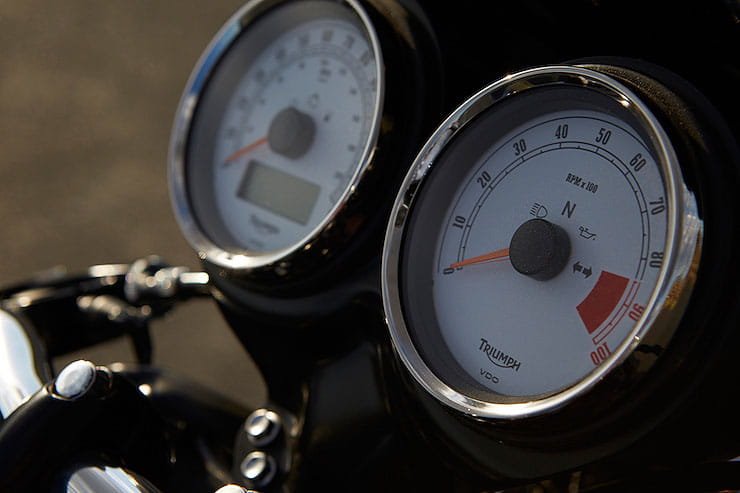 It might not look like it but the Thruxton’s brakes were also a performance upgrade over those of the base Bonneville. Although at the front there’s still just a single front disc grasped by a twin piston brake caliper, the disc itself is larger, now 320mm. Conversely, at the rear, the Thruxton now had a smaller, lighter 255mm disc, again grasped by a twin piston caliper. They are an improvement over the Bonnevilles, although not by much. Although for most riding, which is likely to be fairly gentle and on the street, they are sufficient. Used buyers should check for any sign of seizure or damage while upgrades such as braided lines and performance brake pads should be welcomed.

For the correct café racer posture the Thruxton gained lower, although still one-piece tubular handlers, a more raised rear end (due to those longer shocks) and a pillion seat cover. That said, it’s nowhere near as extreme as that all sounds.

The foot pegs are placed directly below your hips, which propels you into your expected cafe racer-esque position. I was perfectly comfortable, but I would imagine any rider of 6’ 2” or above might find it a little cramped from their waist down. There’s enough room between rider and pillion pegs for a size 10 boot positioned on the toes and the dual seat is comfortable enough. I found the bike quite narrow, which had benefits with B-road handling and was complemented with knee pads on the side of the tank (a £40 option).

Overall though, they take nothing away from the relaxed feel of riding the Thruxton. Life slows down a bit. You take a deep breath, exhale, feel chilled and then you glide. Although without any sort of weather protection (a small headlamp cowling is available as an optional extra, not that it does much), long motorway trips aren’t the most comfortable.

Triumph kept it simple with the Thruxton’s operations and displays – an analogue speedometer and tachometer with odometer and trip information is about all you get to play with. These twin clocks along with the single headlight unit and indicators are attached to the front forks. There are no engine modes or traction control settings which of course befit the 60’s look, feel and engineering. There’s not even a fuel gauge for its 16-litre tank but you do get a miniscule warning light.

That said, although a little basic, it all suits the Thruxton’s pared-back, café racer style and, besides, there are plenty of both official Triumph cosmetic and performance enhancing goodies available, ranging from cowlings, knee pads to slip-on exhausts, centre stand and others. If buying used make sure they’re what you want (or the standard item, such as the silencers, are offered with the bike), are well-fitted and in good cosmetic condition. 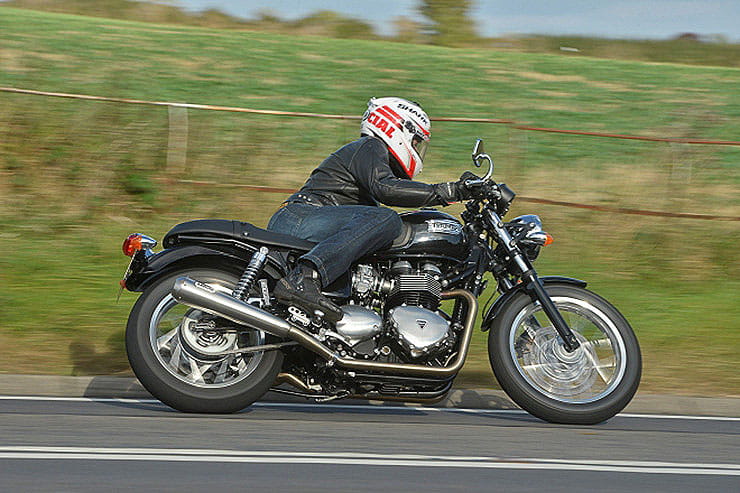 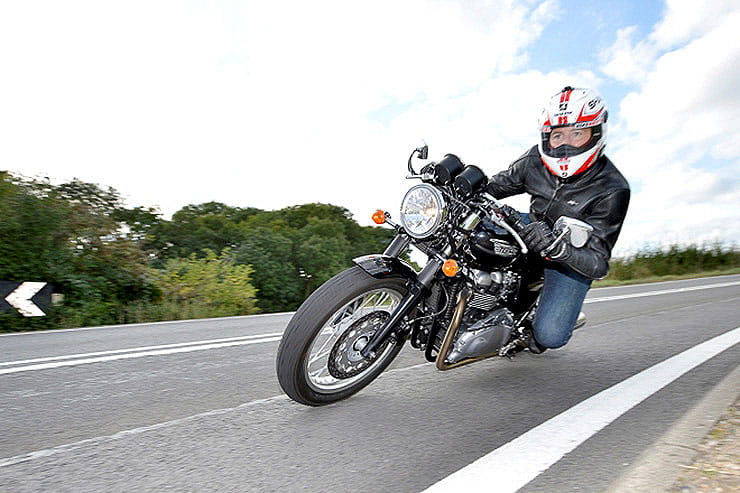 If you’re from a generation who recalls the aforementioned, and original cafe racers, then you’ll feel quite reminiscent on board the Thruxton. But should you have been born in the 80’s or later then just think yourself as the boss of a trendy New York advertising agency…in a big budget Hollywood film. The Thruxton has the ability to make you look cool – retro cool.

Although not particularly high performing or extravagantly equipped, the Thruxton 900 is a bike that unintimidating and easy to get on with and is also good-looking and individual enough to spark conversation among riders as well as those who don’t. It’s sufficiently comfortable for the daily commute despite being designed primarily for the Sunday morning cruise. The retro-cool culture of recent years seems a good fit for the Thruxton and, just like the original 60’s cafe racers, it offers a great platform for a modification or two which therefore attracts an audience of all ages.

Better still, as a used buy it’s now tempting value, it’s mechanically solid and reliable, despite initial concerns when production moved to Thailand and it’s also a great ‘blank canvas’ on which you can customise to suit your own personality. It’s also a bike that’s warmly embraced by nearly everyone. Children wave from family cars, mums smile and dads offer an envious raised eyebrow. And that’s probably because there’s nothing boisterous about this bike, it’s neither aggressive nor threatening in sound or appearance. But there is, still, plenty to like.