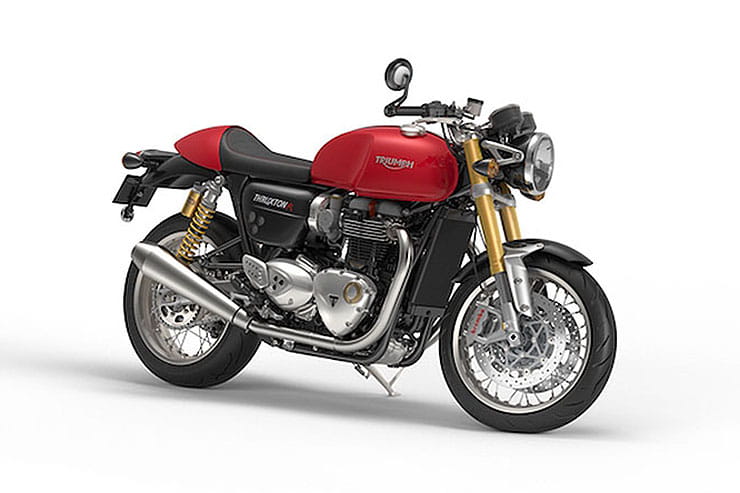 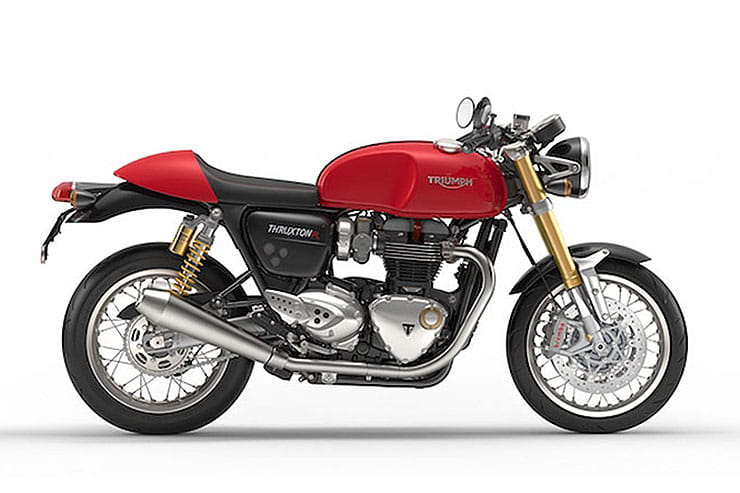 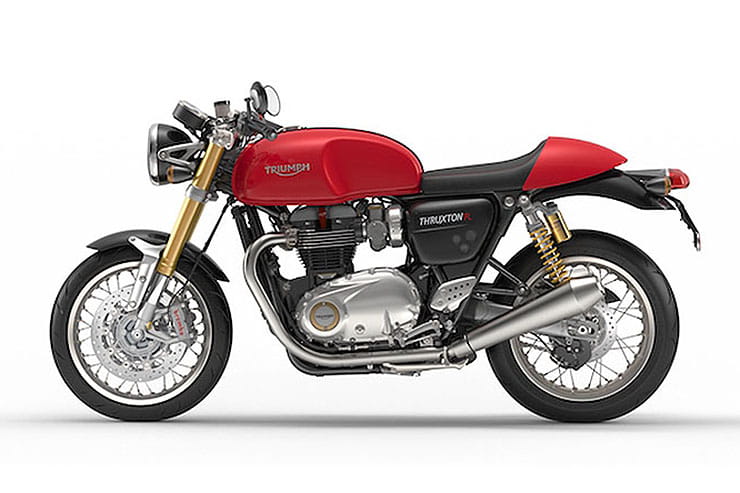 The Triumph Thruxton is the sportier, café racer-styled version of its popular retro roadster Bonneville, which were all completely reinvented in 2016 with an all-new, liquid-cooled powertrain (which is styled to look air-cooled), new chassis, everything…

The Thruxton name itself, meanwhile, comes from the Hampshire racing circuit which in the 1960s hosted the important Thruxton 500 endurance race which specially adapted Triumph Bonnevilles dominated in 1969 by taking the first three places. Soon after, Triumph built a commemorative, performance version of the T120 Bonneville known as the T120 Thruxton and a legend was born. Following the successful launch of an all-new, retro-styled Bonneville by the revived Hinckley Triumph marque in 2001, an uprated, café racer-style Thruxton variant was also launch in 2004 which remained in production for 12 years.

However, the all-new 1200cc version launched in 2016 is not only bigger and more powerful, it also comes in two versions – the basic Thruxton 1200 with conventional forks and twin shocks and an uprated R with multi-adjustable inverted forks, adjustable Öhlins piggy-back shocks plus also equipment upgrades by way of stainless silencers, a ‘Monza’ fuel cap, brushed aluminium tank strap, clear anodized swinging arm, painted seat cowl and a polished top yoke.

With 96bhp and fabulous handling both are a huge step up from the old 865cc, 69bhp version and are also more substantial and better equipped. Reliability and quality have proven good as well. If you like the retro look but want modern sporting ability and features such as switchable riding modes, the Thruxton 1200 is definitely worth a look.

Although a significant step up in performance and specification, the new Thruxton 1200 was also a sizeable step up in price over the old Thruxton 900, too. Where the old 900 costs around £7600 when new, the new 1200 and 1200 R were £10,400 and £11,700 respectively, although, if compared to contemporary sports bikes with a similar Öhlins/Brembo and riding modes spec, that price wasn’t at all bad.

As a used buy, it’s even more tempting value. The R version has proved much more popular so there are more used examples available. Even so, an early 2016 base Thruxton 1200 with well under 10,000 miles under its tyres can now be snapped up for a little over £7000 while a higher spec R of similar will cost a snip at just £500 more. 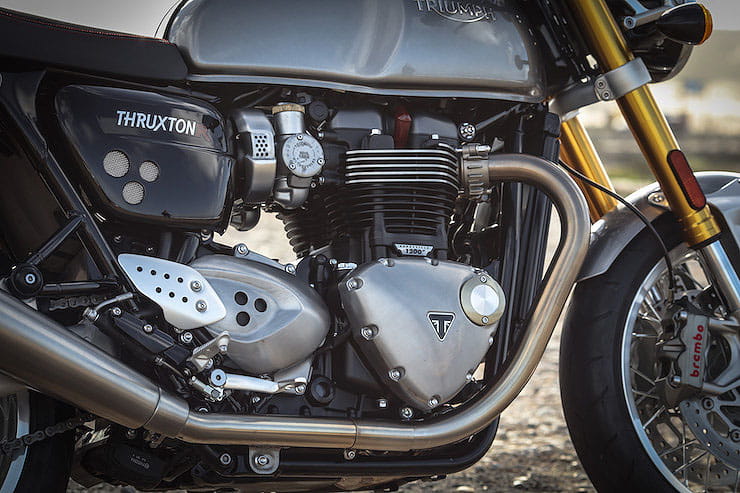 It’s a lively performer for a retro, too. Give it a handful and the speed of the acceleration will quickly eat up and then run out of revs. Click up and the bike continues to pull hard rewarding you for keeping it between 5000-6500rpm with a cracking ride, as if it wants to be ridden like the sportsbikes at the start of its ancestral line. Yet it’s also decently flexible and the three power modes, although not affecting peak power, soften the delivery markedly.

It’s vibrant, and its low inertia crank gives you just the right amount of feeling through the chassis, pegs, bars and seat to reassure you that the engine is responding to your every input. Some bikes can be too teeth-chatteringly throbby but the Thruxton’s degree of mechanical feedback is just right to remind you of its history each time it pulses enthusiastically beneath.

The gearbox is sweet with easy up and downshifts, often clutchless just with the slightest of rolling off of the throttle. The gears on the Thruxton are smaller and have a shorter space between them than the T120 Bonneville, the front and rear sprockets are also different sizes given the Thruxton’s sportier DNA. It means the Thruxton is revvier and responds well to being kept higher up the range, closer to the 7000 red line.

It sounds stunning too. The exhaust note from the stainless steel (on the R, they’re chrome on the standard bike) upswept reverse megaphone-style twin end cans offers a burbly roar, deep and rich. Dip the clutch and give the throttle a handful in town and watch the look on pedestrians’ faces – most will love it. You certainly will. 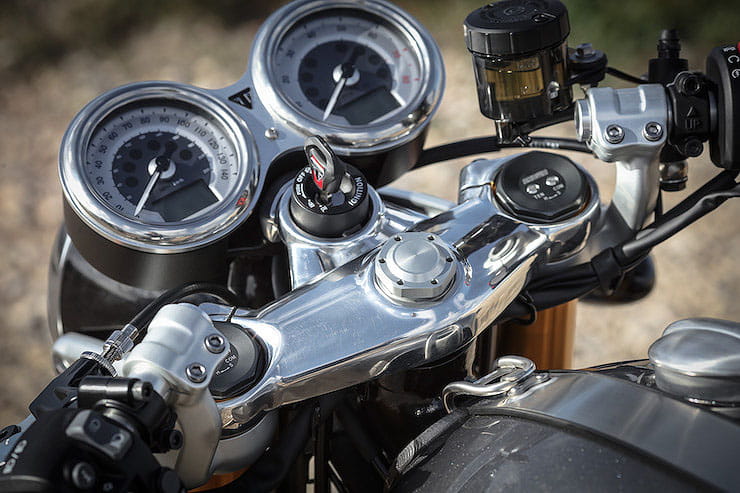 Although a performance version of the Bonneville with a larger engine, the Thruxton 1200 is still ‘only’ 96bhp and a twin cylinder bike compared to our sports machines which are four-cylinders and can approach 200bhp – so, if ridden sympathetically, it has the fairly reasonable fuel economy figures to match. We’d certainly expect mpg figures in the high-40s with over 50mpg easily achievable if ridden with care. That, along with the middling 14.5-litre fuel tank should return a range of over 150miles between fill-ups.

The Thruxton 1200 and 1200 R differ most with the quality of their suspension components: the 1200 has conventional, non-adjustable 41mm Kayaba front forks and preload-only adjustable Kayaba twin rear shocks. The R has fancy, fully-adjustable 43mm inverted Showa ‘Big Piston’ front forks and similarly-adjustable, ‘piggy-back’ Ohlins rear shocks. Either way, as with most Triumphs, both are fine handlers with intuitive, involving steering and fabulous road-holding making both a joy on a twisty road on a sunny Sunday afternoon, something helped further by also being relatively slim and light. The main advantage of the R is its more cultured, classy ride which truly puts it at the top of the retro pile and its adjustment options.

That said, for all the good the suspension is doing, the relatively unpadded and therefore the authentic seat doesn’t offer the most comfortable ride. The suspension, set in completely out-of-the-dealership standard form, settles the bike well even if committed in a corner and you catch an abnormality in the Tarmac. 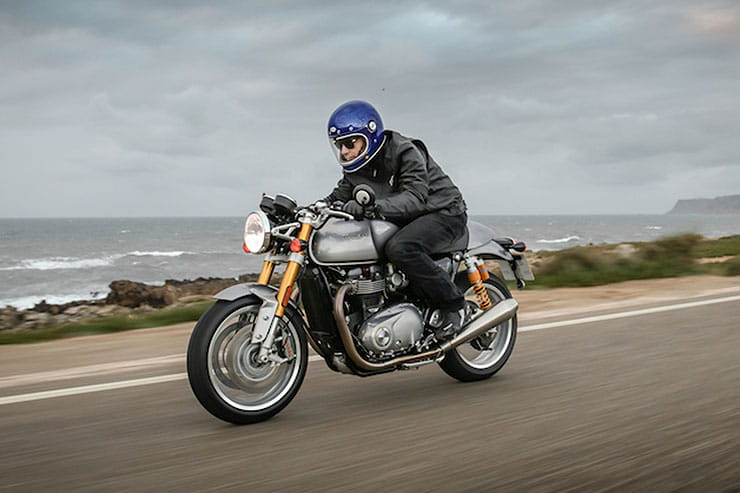 Both Thruxton 1200s feature twin big 310mm front disc brakes although again they differ in the quality of brake calipers used. The stock bike uses conventional, twin piston Nissin calipers and although these are up to the job, the R’s radially-mounted Brembo four-piston items take the braking power up to another, near-superbike level along with extra feel and finesse. You pays your money…

The Thruxton R is an extremely well balanced bike. Narrow with a slender seat waist, it encourages the rider to sit back and lay as flat as possible over the tank gripping with the knees in a true classic racer pose. This is where you get the most out of the bike. Its side profile doesn’t shout sportsbike yet the most comfortable riding position does. It’s certainly easier on the wrists that way!

Of course, that doesn’t make it the most comfortable bike over distance. The seat is fairly thin and the low-ish bars take their toll, which is why many owners choose to fit higher handlebars and/or a small nose cowling. Even then, however, the Thruxton is no real touring bike, with limited luggage space and less weather protection.

Adding to the ride ability of the Thruxton and Thruxton R are the three rider modes: Rain, Road and Sport all of which link to the ride-by-wire system. Each offer no adjustment in maximum power but instead affect the sharpness of the throttle’s response through the speed at which the butterfly valve opens.

These modes can be adjusted while riding with a flick of the appropriately named ‘Mode’ button until your desired one flashed on the instrument panel, roll off the throttle for as long as it takes to whip the clutch in and out. Done.

‘Sport’ certainly lives up to its name and threatens to overrule the traction control under hard acceleration from a standing start, the front wheel lifting a little in the first two gears with zero wheelie encouragement. Meanwhile, in ‘Rain’ setting, there’s a slight, and I mean very slight, snatch in the microscopic amount of throttle travel between off and on throttle should you be crawling through slow moving traffic.

Over 160 dedicated accessories are available for owners to customise their Thruxtons, including a pillion seat and pegs, and like the other Bonnevilles, the Midlands-based manufacturer has produced some inspiration models using a handful of the official accessories; ‘Track Racer’ (£1620) - possibly one of the most beautiful bikes I’ve ever seen, a ‘Cafe Racer’ (£1295) and the ‘Race Kit’ – designed for circuit use only with a price and more info due later in the summer. These prices don’t include fitting by the way. 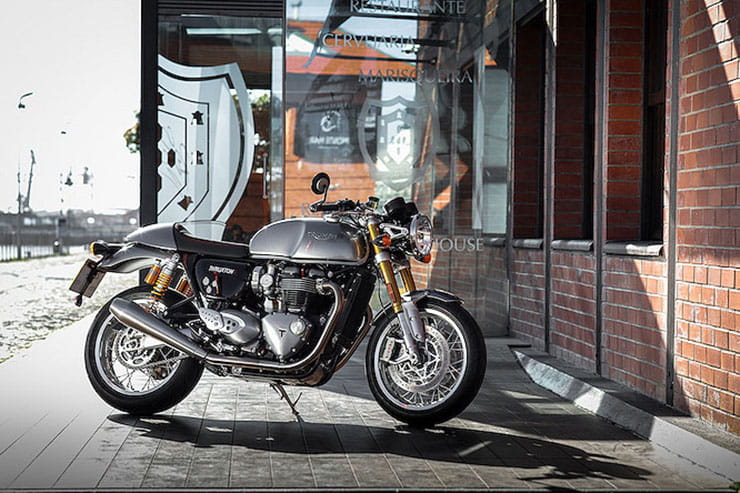 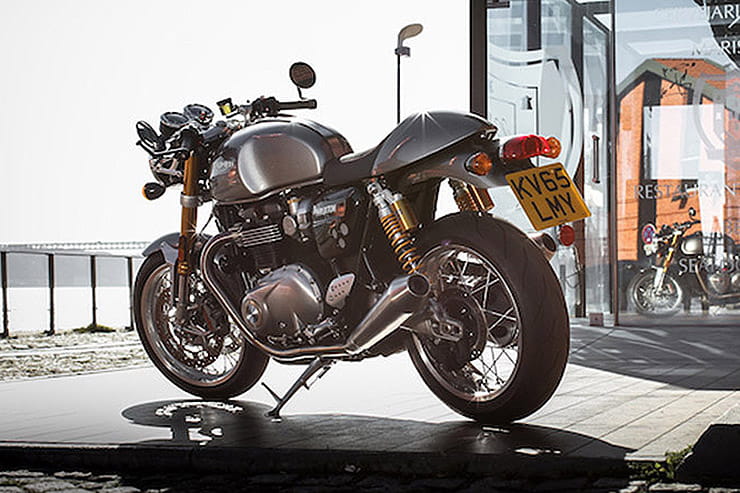 Triumph has created something very special with the latest model to proudly carry the Thruxton name. While the marketing chaps will drill words like ‘icon’, ‘legend’ and ‘authentic’ into presentations and web pages, I’d urge you to get on the bike, feel the engine, hear the exhaust, drop your visor and give it a whirl and you’ll understand why words like that are used.

The Thruxton R stands out even more due to the quality of components and extra detailing. The care and quality of the finish is exceptional and as you swing a leg over, the feeling that some people in a factory near Leicester spent time to complete this four-year project with the care it deserved adds to the overall riding experience.

And because service intervals are now extended to 10,000 miles and the bike is cleaner emission-wise plus a claimed 11% more economic, the new Thruxton 1200 is a winner for your wallet too.