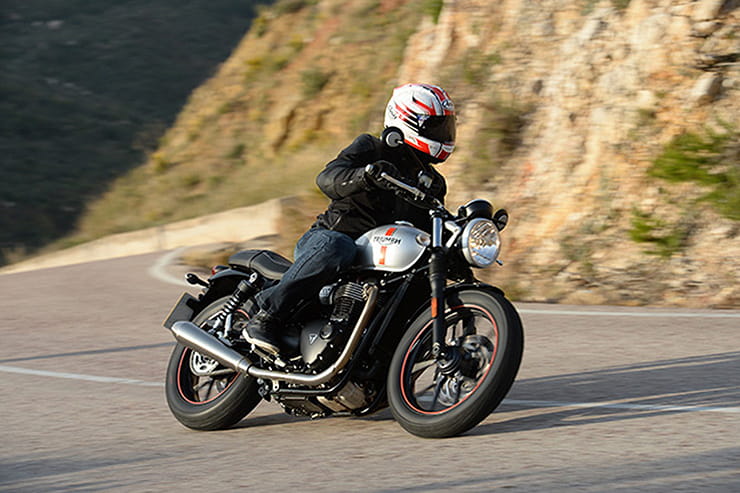 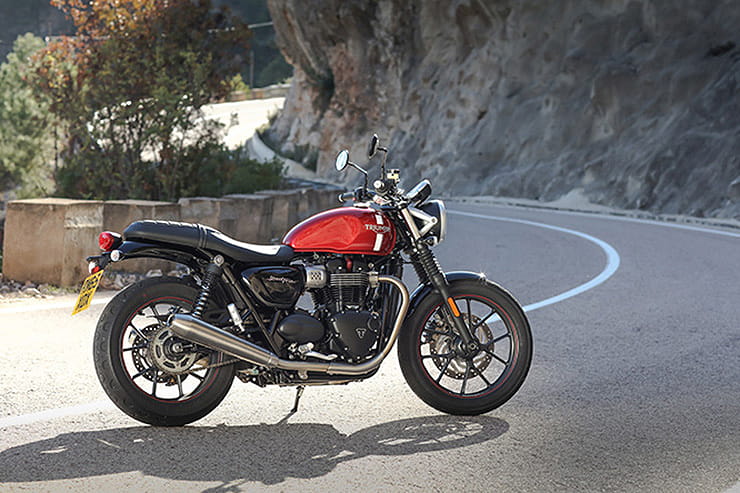 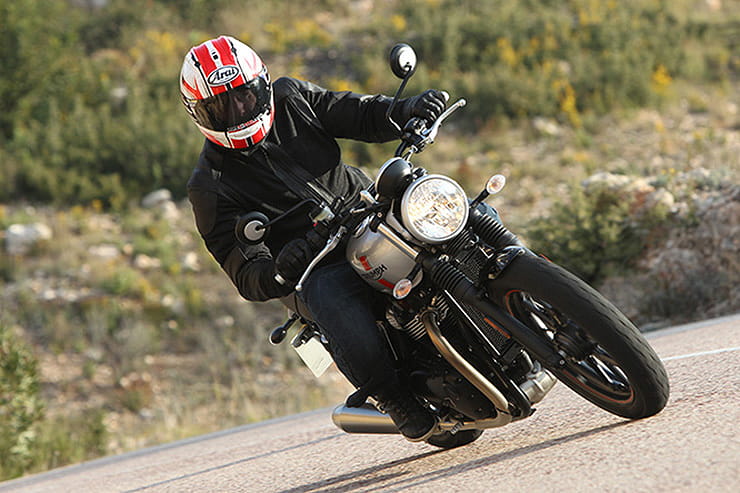 Replacing Triumph’s much-loved air-cooled Bonneville model, the Street Twin arrived in 2016 and was aimed at attracting newer riders into the brand through its relaxed outlook on life (and ability to be A2-restricted). With looks that are far less retro-inspired and more modern roadster than its predecessor, the Street Twin even introduced not only water-cooling but also modern technology such as ABS and traction control via its ride-by-wire throttle. Not that you would necessarily know this as the Street Twin manages to retain all the feel and sound that made the Bonnie such a hit while allowing the modern tech to do its stuff in the background. If you are after a fun day-to-day naked roadster that is easy-going and cool-looking, the Street Twin could be for you. Even more so if you buy one with an ‘inspiration kit’ fitted...

Considering it cost £7200 in 2016, the used prices of Street Twins remain very high. An early bike in a dealership will set you back just under £5500 with private sales commanding in the high £4000s, generally around £4800. The main issue driving this cost is the fact not that many get ridden long distances and so you are generally buying a bike with less than 10,000 miles on its clocks. There are a few customised machines out there which owners try and get a premium for but these are best avoided unless they are built using official Triumph accessories or custom kits.

Triumph called the all-new 900cc Street Twin motor a ‘high torque’ engine, which is fair enough as they also claimed it made 18% more in the low rev range than the older air-cooled motor. However, this does brush over the fact it actually makes 13bhp less peak power... On the road, you don’t spot the lack of peak power and the liquid-cooled parallel twin is a very chilled-out motor that is vibrant and punchy from low down. It runs out of puff fairly quickly but this isn’t a bike for charging about on and instead it is far better suited to keeping the speeds legal and enjoying the ride.

Although the all-new engine gained water-cooling when transforming from the old 865cc motor, it also lost a cam and the Street Twin’s parallel twin motor is a basic single overhead cam design with four valves per cylinder. Interestingly, Triumph gave it a 270-degree firing interval to add to its character - although they stopped short of putting a sixth gear in the gearbox! A reliable unit, there are no major engine dramas to watch out for and it is also cheap to service thanks to its accessibility with annual checks costing just £100-£150. The exhaust system is brushed stainless steel, so resists corrosion well, and it is even fairly fruity to boot – although lots of owners fit a louder aftermarket system with V&H popular. There are ‘hot’ cams from aftermarket firms that can gain an impressive jump in performance but do you want to take the risk and compromise its reliability? 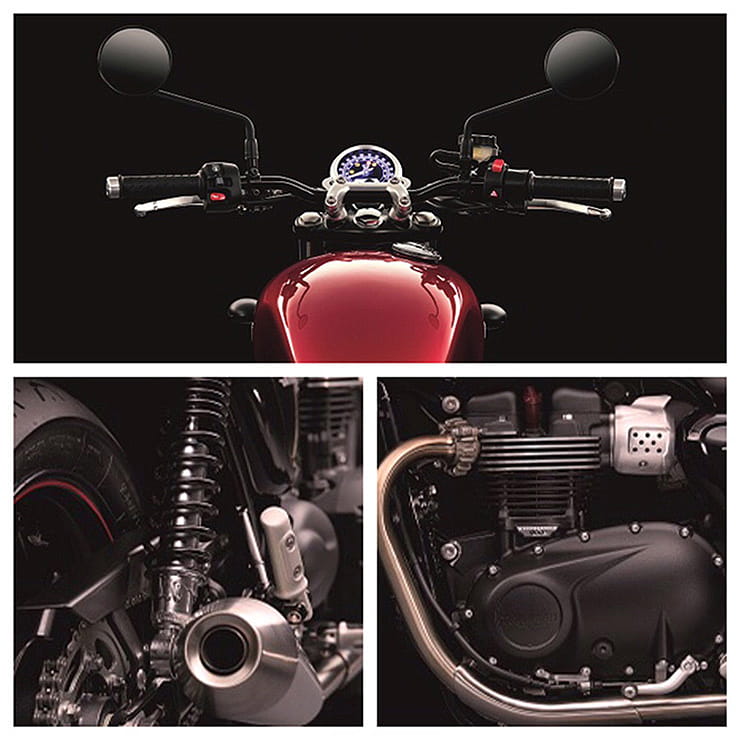 Triumph got all environmental on the launch of the Street Twin and claimed that the ride-by-wire throttle and improved engine design (and water-cooling) gave their new model 36% better economy than the air-cooled Bonnie. While this is nice in theory, in practice it’s not quite as good. That said, 62.5mpg in real world riding isn’t bad at all and should see the 12-litre tank last 200 miles. It’s not, however, the 72mpg Triumph claimed...

Boasting an all-new chassis and suspension set-up, the Street Twin is a blast in the bends. The Kayaba suspension’s adjustability is fairly limited (only preload on the shocks) and it can feel a bit on the soft side when you up the pace but for 90% of the time the ride quality is ideal. And more importantly, the Street Twin’s low seat height and 198kg dry weight mean it is very agile in town and easy to reach the floor on, again making it reassuring for newer riders. A huge improvement on the old Bonnie’s wobbly ride, it stops just the right side of being too sporty and is enjoyable rather than full-on in the bends.

The Street Twin may only come with a single disc, but it adds something to the party that the old Bonneville models never managed to gain – ABS! The 310mm single disc is gripped by a two-piston Nissin caliper, so has enough rather than an excess of power on tap. A good system, on a relaxed bike such as the Street Twin you don’t notice the lack of a twin disc set-up. 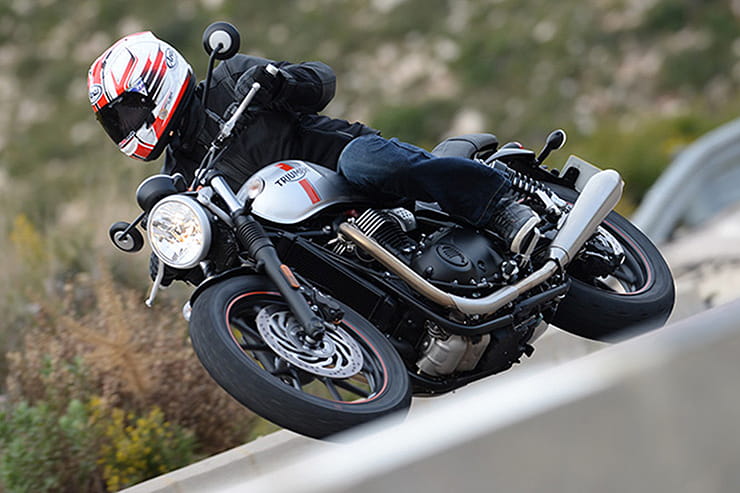 The top of the seat is 750mm, the same as the outgoing model though the position of the pegs and handlebars has been adjusted to create a more comfortable riding position. The foot pegs are slightly further back and have been lowered while the bars are further away and again, slightly lowered. The stand-over comfort has been improved by a narrow waist where seat meets fuel tank and while the seat foam thickness is supposed to have increased by 25% it hasn’t increased its comfort by 25%. That’s not to say its uncomfortable, far from it but you wouldn’t fancy a 100-mile journey in one sitting.

The Street Twin comes with ABS as well as (switchable) traction control, a slip-assist clutch, LED rear light, USB charger under the seat and even an immobiliser system. The dash’s digital menu show gear position as well as a service and range indicator and there is also a fuel gauge, mpg reading, clock and the usual trips etc. Triumph’s tyre pressure monitoring system can be linked to the clocks and Triumph made over 150 accessories for the Street Twin including screens, ‘ace’ bars, mudguard removal kits, V&H cans, etc etc. In short, lots of bits to make your Street Twin stand out from the crowds. Or you could just buy one of the three ‘inspiration kits’ – the Scrambler, Brat Tracker or Urban – which did it all for you. And did it very well indeed.

The Street Twin is Triumph doing what they do best – making a great-looking modern retro (or roadster) that is fun to ride, reliable and ripe for customisation. If you want a cool city bike that is also happy to be taken on weekend rides in the country, the Street Twin is a great option.

Three things we love about the Street Twin… 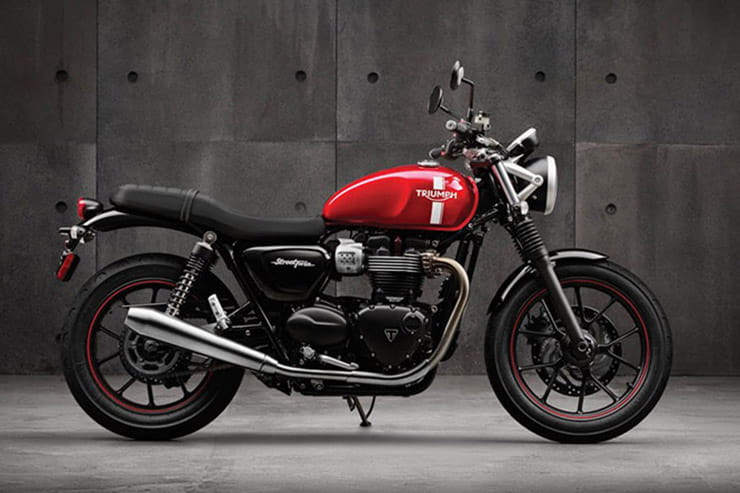