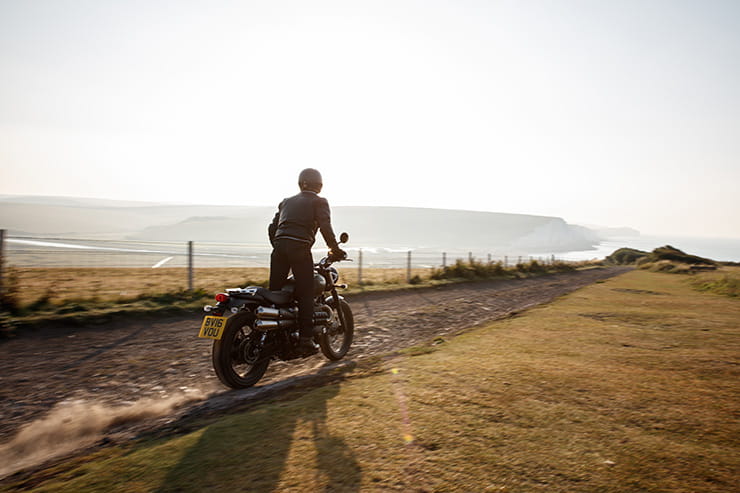 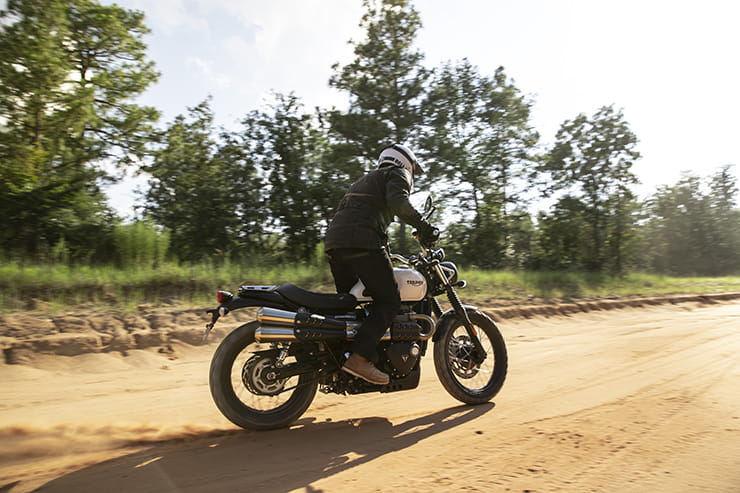 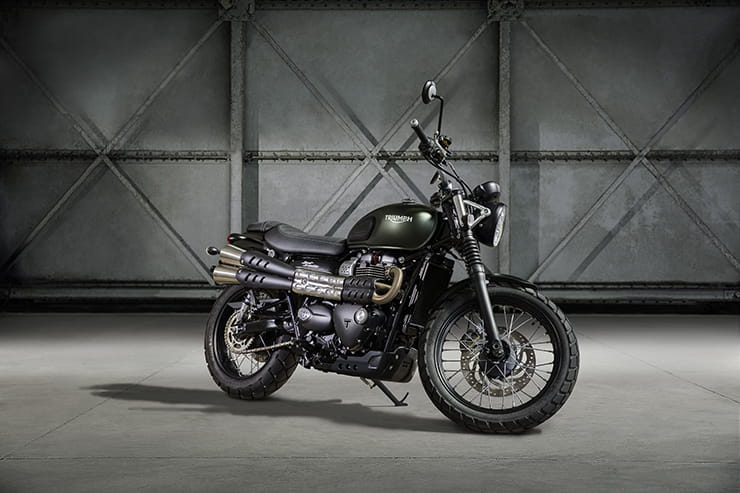 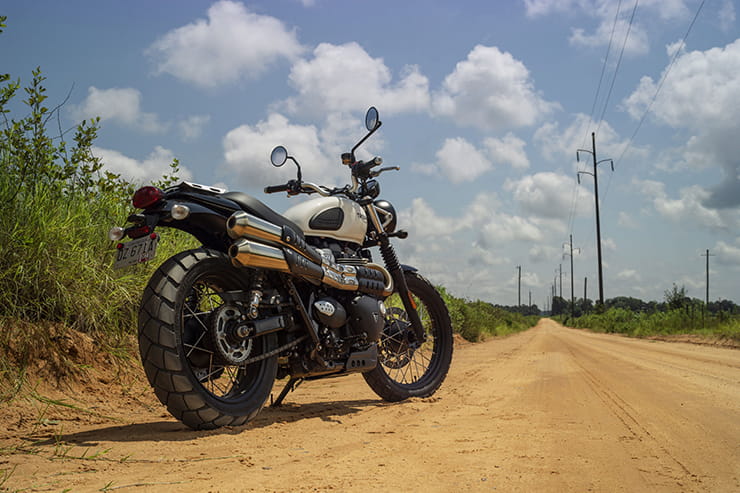 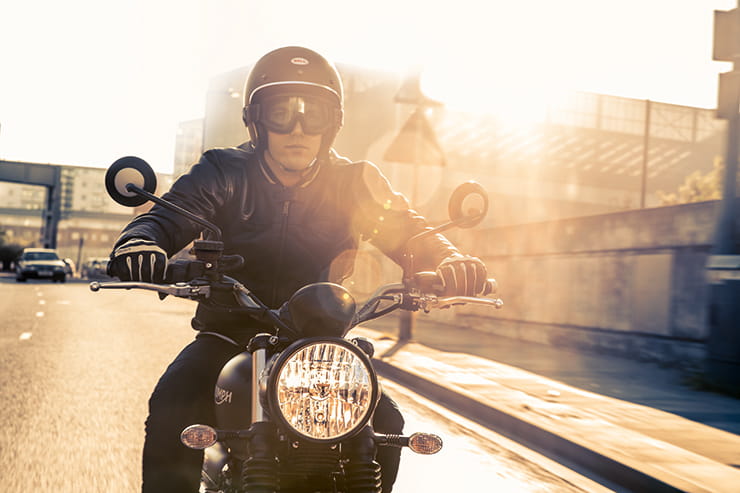 When it comes to modern classics, no one does it better than Triumph. From the Bonnie to the Bobber via the Thruxton and Speed Twin, the British firm has nailed just about every genre there is of late and always done so with their own take on the retro look. However there is one style of bike that remains very close to the firm’s heart – the scrambler. Triumph’s off-roaders were the bikes to have in the 1960s and even stars like Steve McQueen owned and raced a Triumph. Capitalising on this heritage, in 2006 the firm made a Scrambler model, which was a variant on the air-cooled Bonnie, and when the Bonnie was updated to become the Street Twin with its water-cooled motor, the appearance of an off-road version was only a matter of time. In 2017 the first Street Scrambler arrived and true to form built upon the Street Twin platform with some off-road parts to create an urban adventurer. Updated in 2019 and due for another refresh in 2021, the Street Scrambler isn’t the most popular of the firm’s modern classic middleweights, however it is a cracking bike with bags of charm and a very cool look.

The Street Scrambler is a fairly new bike and Triumphs tend to hold their residual values well, so don’t expect to bag a bargain just because it doesn’t sell as well as the Street Twin. A good Scrambler will set you back roughly £6500 in a dealership for a first generation bike or £7500 for an early updated 2019 model. As performance isn’t really at the heart of this bike, buyers tend not to be too fussy about the extra power the new generation boasts and as a result the older model’s value hasn’t been badly affected by its launch. Which is good news for sellers but bad for buyers as it hints that with the 2021 model soon to be released, used prices are unlikely to drop much for either.

The Scrambler uses the same water-cooled parallel twin as the Street model and it is a good, solid power plant that is pleasingly chilled-out and easy-going. A bike that doesn’t really like to be rushed, the torque curve is nice and flat and that means you can hold a gear and ride the linear torque with minimal effort and maximum ease. The 2019 updated model certainly has more spring in its step, with a claimed 18% boost in horses and more torque lower down the rev range, but this isn’t a bike where you really hang on the performance and while peppier you won’t be left disappointed by the 2017 model’s motor. Both can be restricted to A2-legal if required.

As the Street Scrambler is a fairly new model, faults are few and far between because not that many have put on the kind of milage where issues start to be highlighted. The SOHC twin is a thoroughly modern motor with a pleasingly basic design, which helps with reliability, and 10,000-mile service intervals (or yearly) keep the costs nice and low. Despite its off-road styling, very few Scramblers venture onto the rough stuff but it is always wise to inspect the bottom of the motor for dings (there is a bash plate) and the radiator for any signs of stone damage just to be on the safe side. As it is basically an urban enduro, Triumph have given the Scrambler  a lovely light clutch action and the gearbox, which is only five-speed, is also fairly slick in its operation. A few owners have encountered issues with the paint flaking off the frame and front of the motor, but generally this is due to stone chips and you can buy with confidence as long as the bike looks nice and tidy. When it comes to the exhaust, the OE unit is really heavy and fairly weedy in its sound note but it does look cool so not that many get swapped. Some owners go for a louder item but unless you pay extra for a twin stacked system, some of the bike’s classic look is taken away and that’s a shame. 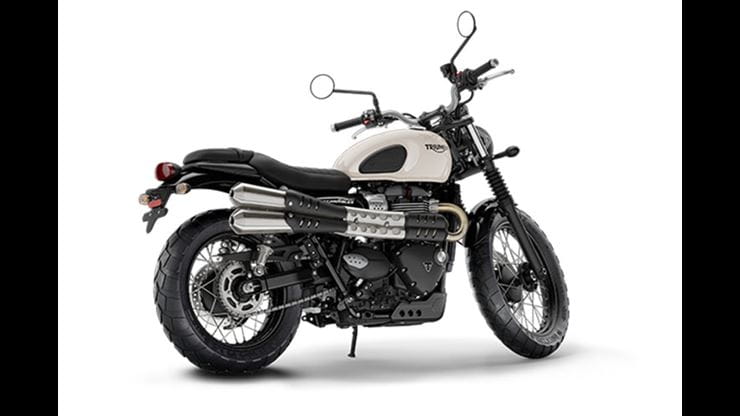 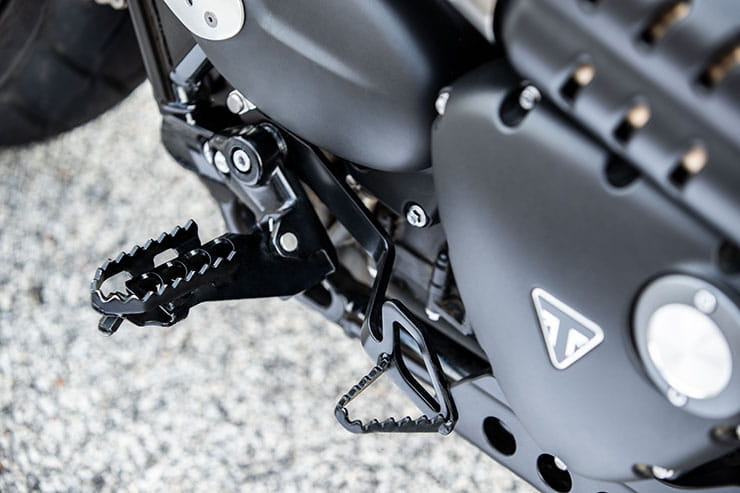 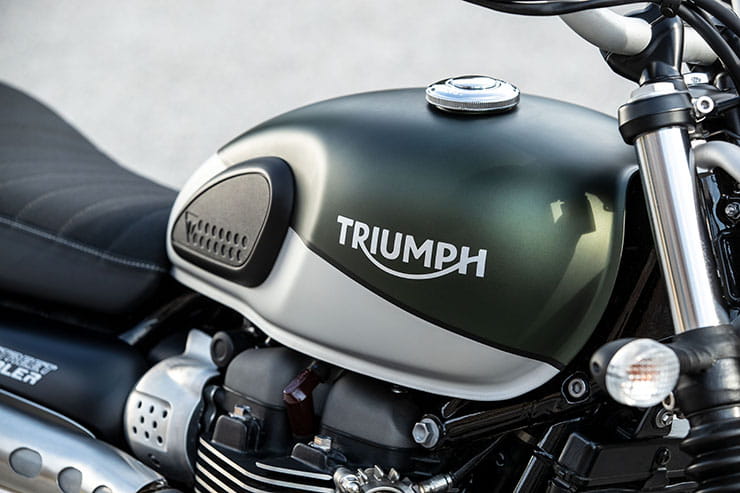 The Scrambler sips fuel at a very pleasingly low rate and if you take it easy the 2017 bike will deliver as much as 87mpg with 62mpg a worst-case scenario and in the mid-70s pretty standard. It may only have a 12-litre tank but at that rate you can expect to cover 150 miles before you run dry. Triumph admitted that the 2019 update was a bit thirstier than the 2017 version but only by about 4mpg so it is hardly a massive worry.

There is actually a difference in front wheel size between the 2017 and 2019 scrambler with the newer model upping its front from the old bike’s 18-inch item to a new 19-inch one. Does this affect the ride? To be honest, not really and it is far more an aesthetic change (Triumph attempted to give it more off-road presence) than anything else. Not a bike for throwing into bends, the Scrambler handles well if you just want to cruise the roads and at that pace the Metzeler Tourance tyres offer enough grip while also looking pleasingly rugged. When you start to push on the soft suspension (you only get preload to adjust on the twin shocks) starts to protest and the fun factor drops dramatically. There again, why go fast? This is a bike designed to allow you to enjoy the ride, not set a new fastest lap on. Triumph call it ‘neutral and predictable’ which is just about spot on. Tipping the scales at 213kg dry the Scrambler certainly isn’t a lightweight, but with a low seat height, narrow waist and good natural balance, it doesn’t feel hefty or cumbersome at low speed.

ABS (not angle-sensitive but switchable) is standard equipment on the Scrambler alongside braided lines. The first generation has a single two-piston sliding front caliper, which is a bit weedy and is why in the 2019 update Triumph broke out the four-piston Brembo box and upped its performance. There is still only a single disc, but the Brembo caliper certainly makes a noticeable difference to the bike’s stopping power. The rear is a pretty standard affair and there isn’t much to say about it aside from always check it is working ok as being underslung, it is prone to corrosion and its pistons seizing. 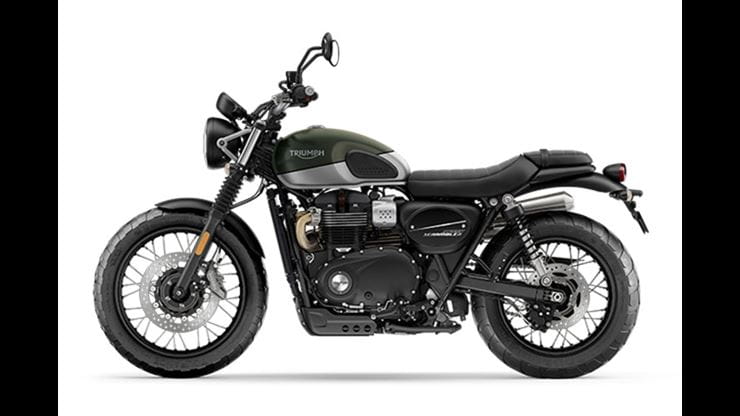 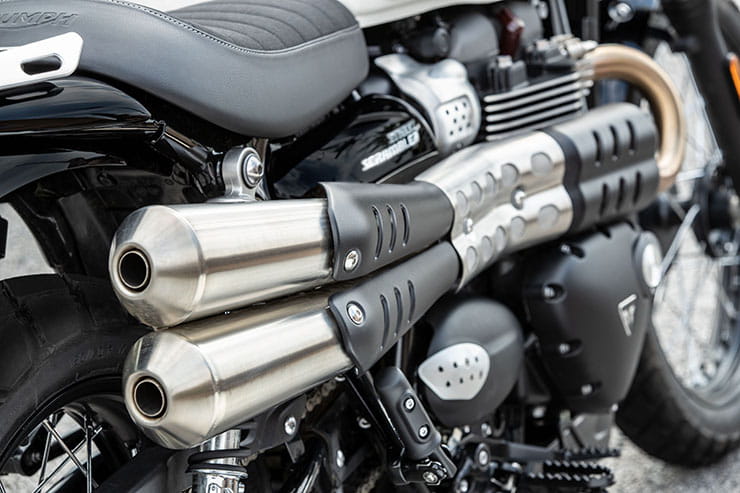 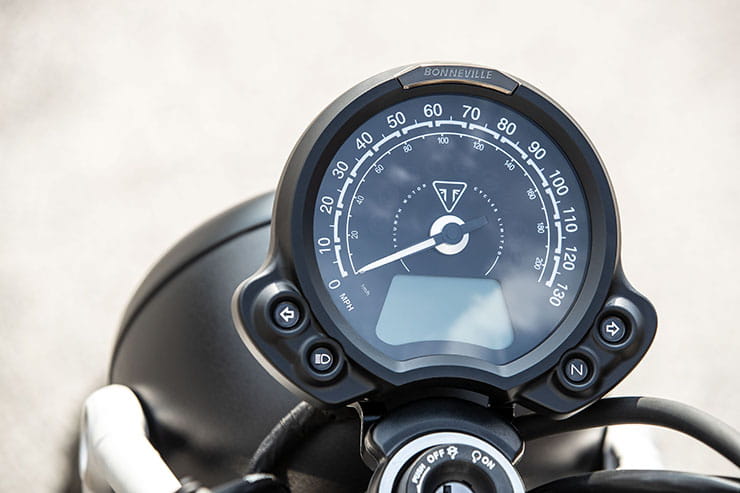 With its tall bars, low pegs and flat seat, the Scrambler is a great bike for gently covering miles on. As it lacks a screen and you are quite upright you don’t want to be going fast, 60mph is plenty, but stick at this pace and you can happily watch the miles pass by. There are luggage options out there but in truth most are aimed at commuters, which is far more realistic as to what any owners are likely to use the Triumph for. If you want to do more miles, consider swapping the chunky treaded tyres for more road-targeted ones which will not only provide better wet and dry grip but also reduce road noise and vibrations.

Thanks to its ride-by-wire throttle, the Scrambler comes with traction control as standard and alongside the ABS it is switchable should you venture off-road. The engine has a slip and assist clutch, there is an immobiliser as standard, USB slot under the seat and the clocks have a gear indicator and variety of other displays such as mpg etc. In 2019 two power maps were added – Road and Rain – although in truth they are a bit pointless on such a chilled-out motor. When it comes to accessories, a centre stand is a must to help you lube the chain, a screen makes covering miles easier and small luggage looks both neat and is practical. Some owners go for the Vance & Hines slip-on silencers, which are quite fruity, and Triumph sell a lot of CNC machined bits such as oil filler caps or brake reservoir covers. Serious riders sometimes opt to uprate the shocks for FOX items, which are an official Triumph accessory, and there is an Urban Tracker kit, which contains a stack of Triumph goodies to make your Scrambler into a funky city adventurer. There are a few ‘customised’ bikes out there, which are best avoided as you can never be 100% sure of the quality of the work and unless you know the customiser who did the job, and can therefore check their quality and skills, these are best avoided.

The Street Scrambler is a really good bike if you want a comfortable urban enduro that looks great and has very little attitude. It’s fun, easy-going and simple to make look a bit different to stand out from the crowds through one of the over 120 Triumph accessories, which is cool. Don’t bother taking it off-road, keep to the urban jungle and enjoy.

Three things we love about the Street Scrambler… 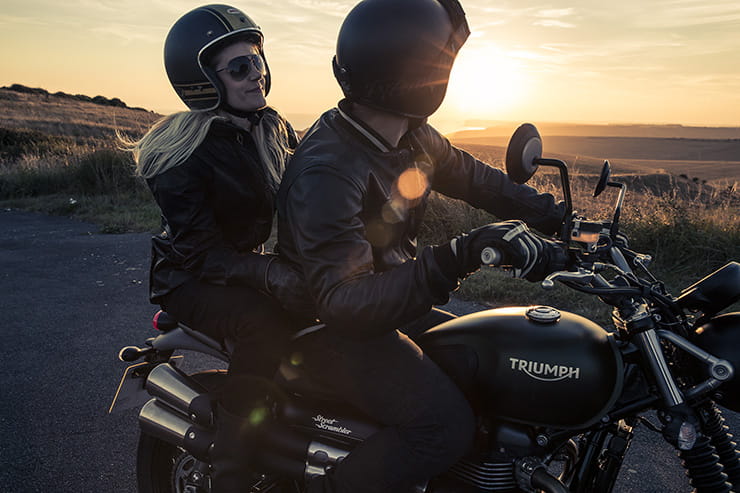