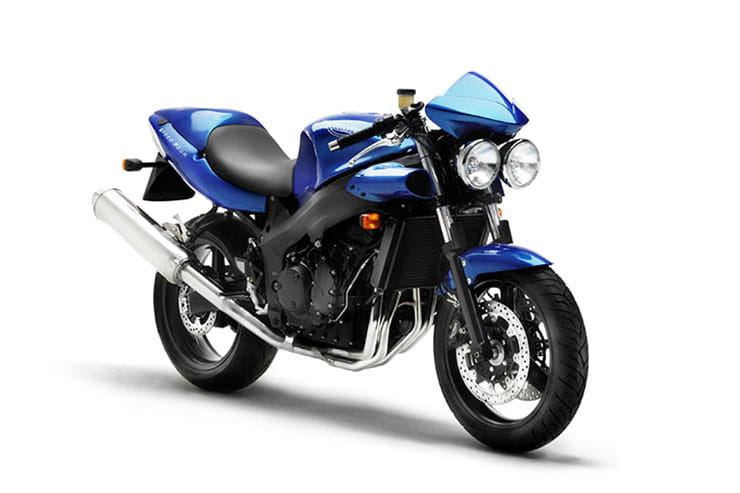 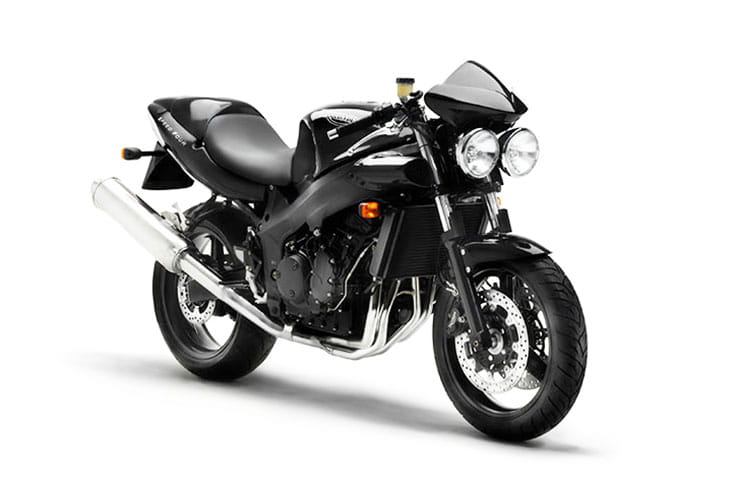 Here’s a blast from the past for you – the Triumph Speed Four. There is a fair chance a few of you may not remember this British-built naked middleweight, which is understandable because it was a bit of a flop, however if you do you are probably thinking ‘oh god, not one of them...’ But hold on, in retrospect we were all a bit harsh on this naked due to the fact its faired sibling, the TT600, was so poor. If you are looking for a fairly cheap middleweight, or even a cheap trackday bike, the Speed Four is actually well worth checking out. Boasting a supersport chassis and engine with flat bars, it is actually a really good fun bike to ride – as long as you are in the mood to feed it revs! And if you can find a Roulette Green one – well, it’s certain to turn heads...

The Speed Four was £5649 brand new in 2002, which was £600 less than the TT600 but still a few quid more than rivals such as the Honda Hornet - but you did get a bike with a higher spec-list. Soon afterwards prices plummeted and they haven’t really recovered due to the fact that the Speed Four is (yet...) to reach cult status. Get online and you can find a tidy example in a dealership for between £2500 and £3500 with the top end a touch optimistic if we are being honest. Private sale bikes change hands for in the region of £2000 but tend to be quite tatty so aim to blow just less than £2700 for a good example in a dealership. Or if you are only going to thrash it on track, buy one that is £2000 in a private sale and has a few miles on its clock!

The inline four engine was taken from the TT600 but Triumph gave the naked bike revised cam shafts and a different fuel map in an effort to introduce a bit of mid-range – not that it really worked. The headline figures Triumph claimed were 97bhp with 50.5ft.lb of torque however these are probably measured at the spark plug, definitely not the back wheel, and it feels considerably less to ride. Better than the TT600 but still quite snatchy on the throttle, the Speed Four prefers to be revved and it is quite down on mid-range when you compare it to a modern inline four. However if you are prepared to work its gearbox, it is a really enjoyable motor to keep on song and actually pretty rapid once spinning. There again, with peak torque at 10,500rpm, that’s no surprise!

Ok, we do need to talk about that inline four engine because it does have a few issues. Let’s kick off with the most obvious, the fuel injection. Triumph used a Sagem fuel injection system on the TT600 and Speed Four, which was a bit of a disaster and is why the Daytona 600 ran Keihin. Unsophisticated and clunky, it is the root of most of the complaints about the bike. Careful set-up and balancing of the throttle bodies can make it ok but you are never going to get it as smooth or refined as a modern system. If the bike hasn’t had its bodies balanced by someone who knows there stuff, the Speed Four can be a bit of a pig on the throttle, so ask when this was last done and be wary of bikes that hunt on tickover. The actual motor itself is quite robust and major failures are rare however the gearbox and clutch can be problematic. The gearbox is clunky as standard and it isn’t uncommon to hear of them jumping out of gear, so always check all is well on a test ride, and a few owners have had clutch baskets collapse. On a common bike this isn’t such a worry but as the TT600 and Speed Four are quite old now, used spare parts are trickier to locate than for something like a Hornet. As the Speed Four is quite old you can also expect issues with reg/recs or generators, but these are quite easy and relatively cheap to replace, but always check the radiator for leaks as that’s a big bill to get fixed. The valve clearances should be checked every 12,000 miles (service intervals are every 4000 miles) so ask when this was last done and also enquire when the coolant and brake fluid was last changed, it should be done every two years. The exhaust is solid on the Speed Four and many owners still run the OE headers however aftermarket end cans are common. Although they can help the fuel injection system and boost the mid-range slightly, most owners fit them as they either like the extra noise or they have dropped the bike and dinged the OE can! 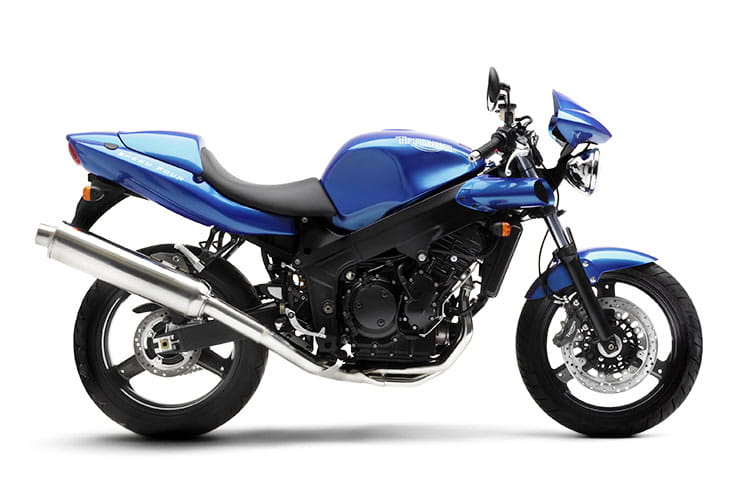 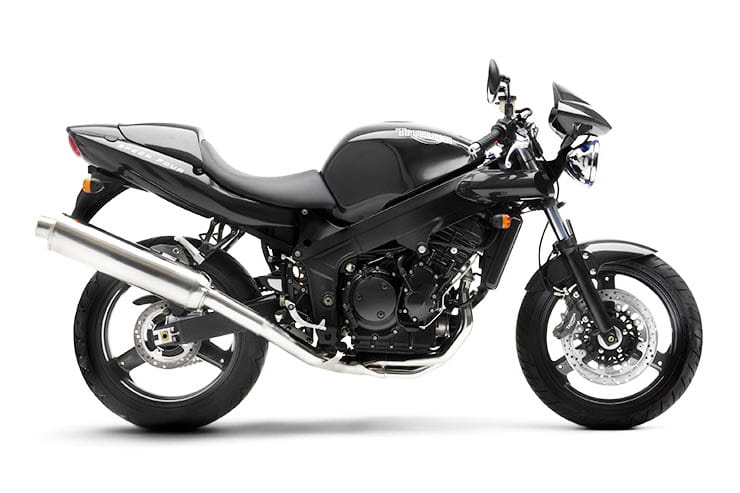 On a rev-happy engine such as the Speed Four’s, fuel economy is never going to be great and while some owners claim to get close to 50mpg, you need to assume you are more likely to average in the low 40s. The good news, however, is that the bike has quite a large 18-litre tank, so you should be able to clear 130 miles between fill-ups. That said, a few owners report they need to start looking for a fuel station at just over 100 miles if they are riding with enthusiasm...

This is the reason why you may want to consider buying a Speed Four. Triumph absolutely nailed the chassis on the TT600, but sadly the poor fuelling made everyone overlook its sweet handling. If they had got the fuelling sorted, as they did on the Daytona 600, the TT600 and Speed Four would have sold better. Why do we say this? Because the TT600 and Daytona 600’s chassis are basically identical and everyone raved about the Daytona’s handling! Unlike so many rival naked middleweights, the Speed Four has fully-adjustable suspension front and rear and it is far from budget. With careful set-up (by now assume the forks will require a rebuild and the shock may well be past its best, always check for leaks and any lack of damping) the Speed Four is a great handling bike that is light, agile and an absolute scream in the bends. But it’s not all plain sailing, the steering lock is sportsbike poor and the suspension linkages (as on all Triumphs...) are prone to seizing if not stripped and regreased regularly. When buying used, always inspect the linkages and also the wheel and head bearings as they will probably be on their way out by now. Generally, however, the chassis is the bike’s stand-out feature and all should be well.

Again, like the chassis, the Speed Four’s brakes are straight off the supersport bike and that means twin four-piston calipers that have bags of bite. Braided lines were standard fitment, which is great, and overall there is little to fault. They aren’t particularly known for sticking pistons or warping discs, so a quick check that there is still plenty of thickness left on the disc and no signs of scoring from worn pads and all should be well. 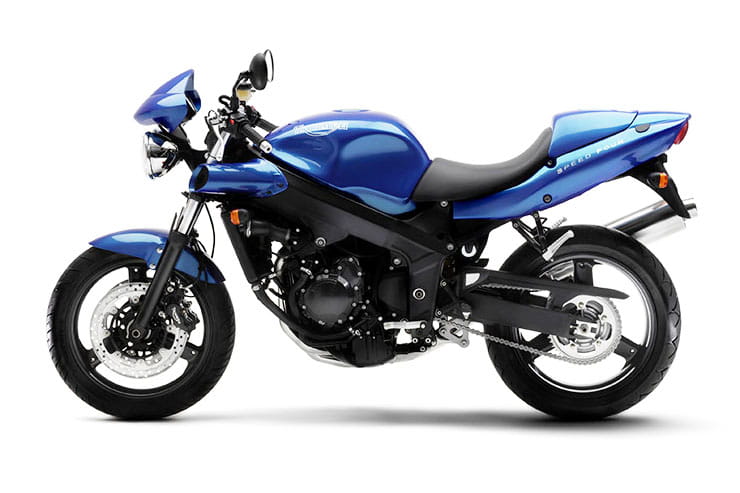 The Speed Four has a small front nose fairing but in all honesty, it isn’t very effective. Not that owners seem to bother fitting a taller screen so it seems they are comfortable with their decision to go naked and put up with what that entails. As this bike was built in an era when supersport bikes were still pretty practical, the Speed Four’s seat is actually surprisingly well padded and if you can put up with the windblast, or are happy to keep the speed below 60mph, it’s ok for covering reasonable distances on.

In 2002 rider assists weren’t common so there is nothing on the Speed Four, not even a fuel gauge! Accessories are also quite thin on the ground and although Triumph did sell a few such as a belly pan, radiator cowls, hugger, tank bag and throw-over panniers, most used bikes are pretty standard. Always be very wary of a bike with an alarm fitted (Triumph sold their own but most went down the aftermarket route) as they can be a nightmare and are seldom worth the hassle nowadays. Generally, the best things to add to a Speed Four is a belly pan, new sticky tyres, a replacement shock and maybe new forks springs when you get the forks rebuilt. However at this point we should mention colour... The Speed Four came in a variety of colours but everyone remembers the Roulette Green – if you want the bike to stand out, this is the best option by far! Although some sellers try and charge more for it as it is so memorable...

The Speed Four remains an interesting bike and one that is also still pretty cheap. Good handling and not that bad looking, the engine isn’t the best but careful set-up can make it run fairly well and then you have a sporty naked that is a bit different to the run of the mill Hornet, Fazer, SV, etc etc...

Three things we love about the Speed Four… 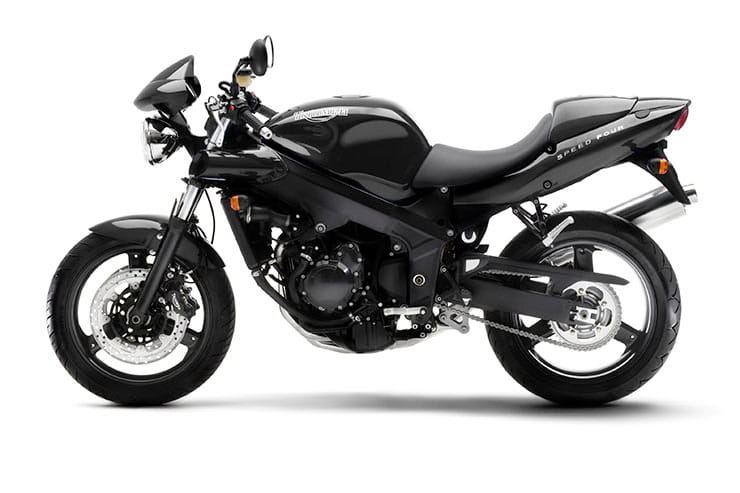