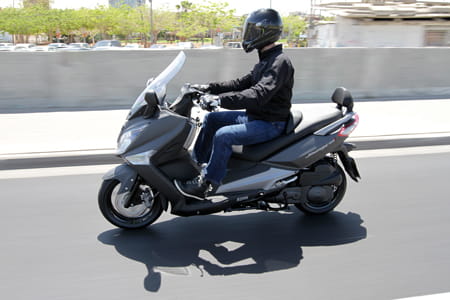 As relationships go the Sym GTS/Joymax and I have some history together. I took the prototype GTS 250 out on a date way back in 2004; she was a bit rough back then, no make up and didn’t really make much effort. Thankfully she worked out over winter and I rode her at the official launch a year later in Provence, we were happy together, months later she had a little 125. Over the years she blossomed into the pretty little 300i Evo but time was taking its toll and finally in 2012 she had major surgery. We went to Tel Aviv for a few days while she recuperated and I found out she’d changed her name and wanted to be called ‘Joymax’ but that’s a whole new story…

The scooter formerly known as ‘GTS’ was redesigned from the ground up and now uses its European name. The styling is much sharper, its frame is stiffer and the engine new, it’s more economical, quieter and produces 20.2bhp at the rear wheel (the Joymax comes in 125cc and 300). The dash looks stunning and has four interlocking circular screens with a fuel gauge, speedo, rev counter, temp gauge and digital screen, it’s backlit in blue and features trip, time and odometer. There’s a USB/12v equipped cubby hole in the right hand side of the legshields and the seat can be popped using a button on the handlebars to reveal a humungous illuminated storage space (large enough for two helmets) complete with manually operated immobiliser. Other features include a heater in the centre of the floor; it’s operated by opening a grill. 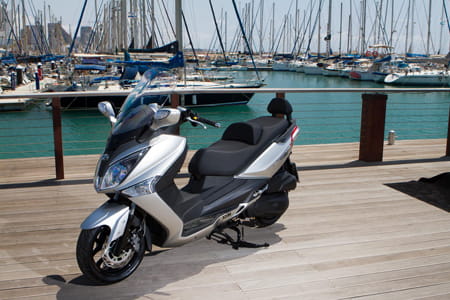 One of the first things you notice when you hop on board either the 125 or 300 for the first time is just how plush and roomy the seat feels, it also has an adjustable rider backrest and a pillion rest too. The pillion backrest can be removed to enable you to fit a rear carrier for a top box if you wish to extend the luggage/carrying capacity.

Pillions also get flip out pegs. Another thing you can’t help but notice is the huge coach like rear view mirrors, they give a brilliant rear view. The 125cc version is quite nippy, it gets off the line well enough and will do just over 65mph. The Joymax comes equipped with a linked braking system, which is very good and it handles well too. The scooter feels so well balanced that you can stop it at the lights and not need to put a foot to the floor for a couple of seconds, so it’s great for city riding.

The new engine has increased capacity from 263.7cc up to 278.3cc which gives it more power than the competition (Kymco Downtown 300 and the Honda SH300). On the road the 300 has plenty of power and is good for 87mph, so is more than capable of covering some serious distance in total comfort. Like the 125, the 300 Joymax handles well too, the suspension is plush, well damped and keeps the scooter planted.

The brakes were stonking on this model too; once again they’re linked. The 300 Joymax feels very stable and it has a great turning circle (2.5 metres) for those feet up U turns, the scooter was also very easy to get on and off the centre stand which is a good selling point. Both machines are good looking, ride well and aren’t too expensive, give one a try. 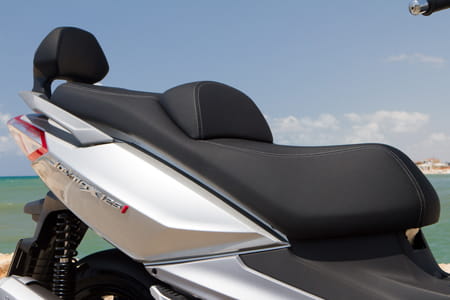 I’m not sure where our future lies but the Joymax and I have had some good times together, our little 125 starts school soon and the scars have almost healed on my favourite lady but what happened in Tel Aviv stays in Tel Aviv…